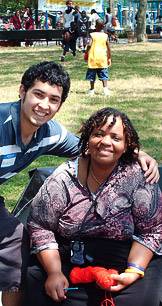 For rising junior Andres Guerra (left), an internship with the Citizens Committee for New York City is solidifying his commitment to working for social justice. Guerra is one of 46 students placed in public service internships this summer by the University's Pace Center. In addition to social justice, the students are learning about issues ranging from domestic economic and international development to sustainable growth. (Photo: Courtesy of Andres Guerra)

This summer, Princeton's Pace Center has placed 46 students in public service internships, where they are learning about a range of issues firsthand and gaining a wealth of unforgettable experiences.

The internships match students with nonprofit organizations in areas such as education, health services, human rights, social justice and sustainable growth, in locations as near to the Princeton campus as New York City and as far away as Uganda.

Kiki Jamieson, the Class of 1951 Director of the Pace Center, said that student interest in public service internships grows every year. "More and more Princeton students are eager to make substantive contributions to solving public problems," she said. "The lessons they learn have a lasting impact on their academic and personal development."

The Pace Center is the primary avenue through which Princeton students can seek public service internships, with funding from a variety of sources. Opportunities are also available through the Office of Career Services, the International Internship Program, the Princeton Environmental Institute, the Woodrow Wilson School of Public and International Affairs, and the Grand Challenges Summer Internship Program, which focuses on energy, health and development. In addition, public service opportunities for current students are sponsored by alumni classes, such as the classes of 1969, 1975 and 1977, which provide funding to students placed in the Class of 1969 Community Service Fund's Princeton Internships in Civic Service program.

According to Elsie Sheidler, assistant director of the Pace Center, funding for the internships ranges from $3,000 to $5,000, depending on location and funding source. About a third of the number who applied through the center were placed this summer.

Sheidler said that as the Pace Center has worked to expand the educational aspects of such experiences, it also seeks to increase funding by developing relationships with new partners, including alumni and academic programs, to allow more students to pursue such opportunities in the future.

While still on their summer internships, four students described their experiences from the field: 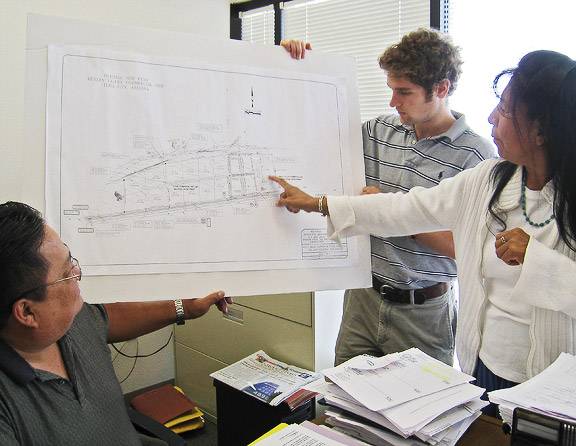 Richard Andrews (center), an economics major and a rising senior, is spending the summer learning about economic development in the Navajo Nation in Arizona. He is working with Jonathan Claw (left) and Dolly Lane (right) in the Tuba City Regional Business Development Office. (Photo: Courtesy of Richard Andrews)

Economics major Richard Andrews, who is from Richmond, Va., is spending his summer wrestling with issues of economic development at the Navajo Nation reservation in Arizona. In the process, he is generating ideas for his senior thesis.

Andrews is working for the Tuba City Regional Business Development Office to assist in economic development in the Western Agency of the Navajo Nation. Much of his time is spent assisting the principal economic development specialist in writing grant applications, meeting with clients and helping with their business plans, and collecting data on micro and small business loans administered by the office.

"It seems that just about every day I learn about some new issue that the Navajo are facing," said Andrews. "My particular work is focused on empowering the Navajo through private enterprise," noting that "unemployment on the reservation stands at around 48 percent."

Andrews' internship is a return to the Navajo Nation; he was there over spring break with 13 other Princeton students as part of a "Breakout Princeton" trip sponsored by the Pace Center. The Breakout program combines academic learning with service in trips designed and led by students.

Andrews explained his interest in returning to the Navajo Nation for an internship from being "fascinated by the tension between the Navajo's desire for economic development and the desire to preserve their traditional way of life."

He added, "It's been a very rewarding experience and has provided some much needed perspective on what I will choose to do with my life after Princeton." Besides the people, who "are definitely going to be what I most remember," Andrews said the most surprising thing he has learned is "how to make Navajo tea."

An anthropology major also pursuing a certificate in Latin American studies, Andres Guerra chose an internship that dovetails with his academic and personal interests. The rising junior, who is from San Jose, Calif., is involved in the Community Organizing Project, a two-year pilot program of the Citizens Committee for New York City that works with resident-led organizations to promote community volunteer projects.

"My studies at Princeton have definitely influenced my desire to work in social justice and specifically with people of disempowered minorities," Guerra said.

The son of immigrant parents from Guatemala, Guerra added that he also has been inspired by the example of his mother, who works with abused and neglected children. "It is this strength that inspired me to pursue fieldwork at the grassroots level, and to talk with residents in stressed communities."

Through the Community Organizing Project, Guerra spends two days a week interviewing residents and elected officials of Far Rockaway, Queens, about issues in that community. Guerra's other main duties are in the office, where he compiles data and organizes outreach activities. The project also is focusing on the neighborhoods of Park Hill, Staten Island; and Crown Heights, Brooklyn.

Two experiences that Guerra said have been particularly rewarding were talking to graduating middle school children and attending an anti-racism workshop. In his talk to students, Guerra said he was able to use his own life story to "challenge their assumptions of being unable to ever attain a degree from a school of prestige."

On a personal level, Guerra has gained important insights from his summer internship. "I'm also seeking to cultivate my own 'social person,' and I wanted to involve myself in what I consider to be a necessary social engagement," he said. 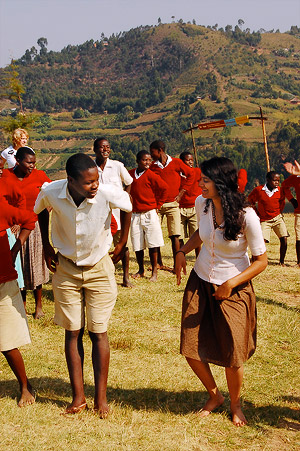 At the end of her freshman year, Shivani Radhakrishnan traveled far from her home in Mount Hope, N.Y., to southwest Uganda. A budding philosophy major, she wanted to gain firsthand experience in working at a nonprofit organization focused on issues of sustainable growth through community building and education.

Radhakrishnan selected an internship with the Ugandan organization Edirisa, which she said "stood out because of the grassroots nature of its efforts." At Edirisa, she is working as an assistant to the director and is learning the various ways the organization serves rural communities.

On the personal level, Radhakrishnan said her work is especially rewarding and involves a great deal of interaction with the local population, and includes teaching school children and learning about customs and crafts. "I've been able to help with adding to the local school curriculum to encourage creativity and understanding," she said. "Edirisa creates workshops that require debate and different approaches when facing academic questions, and recently, I have developed and presented these activities in the classroom."

When her eight weeks in Uganda are over, Radhakrishnan said she knows the experience will live on in her mind. "One of the most beneficial elements of my trip will be looking at things with a broader, more global perspective," she said. "It's also great to see how crucial it is to interact with local cultures and customs when looking toward growth in the future." 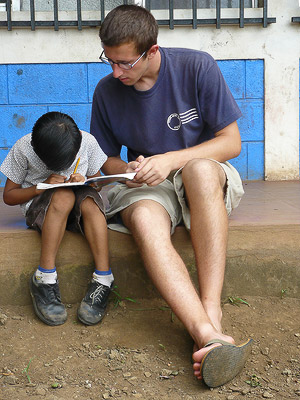 During his summer internship in Nicaragua, Isaiah Usher, a rising sophomore, is examining issues of health and education in Nicaragua, and has had the opportunity to help teach a first-grade class. (Photo: Courtesy of Isaiah Usher)

Rising sophomore Isaiah Usher, who is from Shoreham, Vt.,  chose an internship in Nicaragua for several reasons. He explained that he wanted to learn about issues of international development in poor, rural communities by focusing on the key concerns of education and health. He also was eager to improve his Spanish. And, "most importantly," he said he specifically wanted to "spend a summer in service."

Usher is working on the health team with La Esperanza Granada, which he said "provides a helping hand to the many disadvantaged children in Nicaragua without compromising their, or their parents', dignity and self-respect."

Among his many tasks, Usher is helping the nongovernmental organization assist with eye exams in order to provide children with glasses, as well as organizing dental work. He also is helping to teach a first grade class in La Prusia.

His experiences with La Esperanza Granada, as well as from living in the home of a hard-working, large family, are solidifying Usher's intention of pursuing studies in international development and aid as his Princeton career progresses.

"I now have faces, days, a way of life to put to the case studies and the examples that I will study," he said. "I hope that this experience will lead to a greater understanding."

Usher added, "This realization -- that helping people will not be easy or smooth -- is something that I think is really important to experience for oneself, and I am glad I have had that here in Nicaragua."