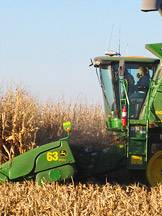 Students on a Breakout Princeton civic engagement trip visited Greensburg, Kan., over fall break to learn about how the small agricultural town is rebuilding sustainably after a devastating tornado. To learn more about the community, the Princeton students interacted with local residents in various settings and worked on a farm, where (from left) sophomore Barbara Hendrick and junior Carrie Worcester drove a combine. The Breakout Princeton program facilitates students learning about and taking action on issues of public significance in communities across the country. (Photo: Courtesy of Megan Prier)

In the wake of a tornado that leveled Greensburg, Kan., in May 2007, local residents forged an ambitious plan to rebuild the small agricultural town with a focus on sustainability. For a group of Princeton students who traveled there over fall break, this effort became an important lesson both in environmental awareness and civic engagement. 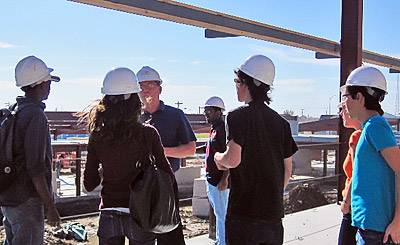 The Princeton students visited a new K-12 school in Greensburg, one of the buildings being constructed according to the U.S. Green Building Council's Leadership in Energy and Environmental Design standards. (Photo: Courtesy of Megan Prier)

A dozen students spent the first week of November in Greensburg on one of seven Breakout Princeton civic engagement trips, which are designed and led by students and overseen by the Pace Center. The "Green Design in Greensburg, Kansas" trip was intended to teach the students about green design while introducing them to social issues involved in the town's revitalization.

The Princeton contingent met with Greensburg GreenTown, a grassroots organization that works with local officials, business owners and residents to incorporate sustainable principles into the rebuilding process. Community support of the green design mission led to an ordinance requiring work on all municipal buildings larger than 4,000 square feet to adhere to the U.S. Green Building Council's Leadership in Energy and Environmental Design standards. Projects completed or being built under these standards include a new city hall, a small-business center, a hospital and a K-12 school building as well as a renovated county courthouse.

The Princeton students visited green building sites and prepared PowerPoint presentations for Greensburg GreenTown to use in future educational sessions on sustainable design. To learn more about the community, they also worked on a farm and interacted with local officials and residents in various settings, including a high school football game.

"Everybody learned a lot about green design, but one of the highlights was seeing how it was really the community that made it all work in the end," said junior Megan Prier, who led the trip with classmate Liz Parsons. "We saw how they came together after the tornado and how they were all really enthusiastic and willing to learn and help one another." 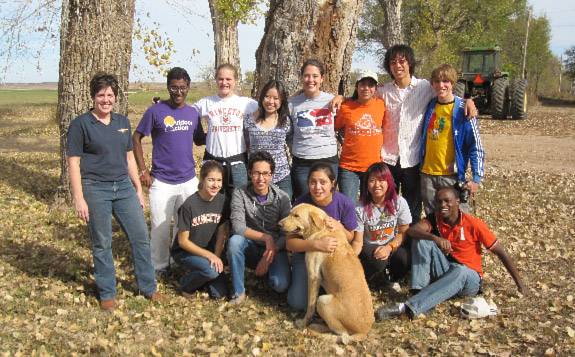 Students on the "Green Design in Greensburg, Kansas" trip, who visited a family-owned beef farm among other sites in town, said they came away impressed by the community spirit they witnessed in the post-tornado reconstruction. (Photo: Courtesy of Megan Prier)

Parsons said the students came away with more awareness of how "going green is not hard to do. It's about, in many cases, making the little changes that will pay off in the long run." She added that she and the other students, most of whom come from urban communities, were struck by the community spirit they witnessed in the rebuilding of Greensburg.

"What I personally will take back is an appreciation for rural communities like this and the degree to which these people, after coming out of their basements that night and seeing the destruction, actually had the foresight to imagine a town like this," Parsons said. "I think that's really an incredible accomplishment and something that we can look to as a model for other communities in the future."

Student interest in the Breakout Princeton program has grown steadily since it was launched two years ago to facilitate students learning about and taking action on issues of public significance in communities across the country. The Pace Center increased the number of trips from five to seven this semester and received 120 applications for the 70 available spots, according to Andrew Nurkin, senior program coordinator at the Pace Center. Including trip leaders, 83 students participated in the fall program. The Undergraduate Student Government has directed funds to the Pace Center to support the Breakout program this spring, among other civic engagement activities.

In addition to the Greensburg visit, the roster of fall trips included: "Mass Incarceration in New York and New Jersey"; "Deaf Education in Washington, D.C."; "Stigma of Mental Illness in New York City"; "The Rule of Law on the Pine Ridge Reservation in South Dakota"; "Music Outreach in Philadelphia"; and "Closing the College Awareness Gap in Brooklyn." 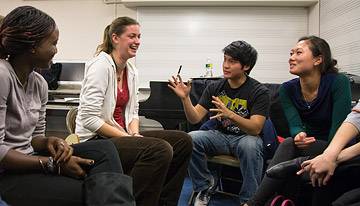 From left, Princeton students Pauline Ndambuki and Erin Buchholtz discussed music outreach issues with students at the Curtis Institute of Music in Philadelphia, one of the cultural, educational and advocacy organizations they visited during their Breakout trip. (Photo: Brian Wilson)

Participants in the Philadelphia trip discussed music outreach issues with members of the Philadelphia Orchestra, students from the Curtis Institute of Music and representatives of Pieris Music, a performance, education and advocacy organization. They also engaged with preschool students in Settlement Music School, performed outdoor service work at the Village of Arts and Humanities and made phone calls on behalf of WXPN, a public radio station. In addition, they attended concerts and visited cultural venues such as the Painted Bride Arts Center.

"It wasn't always music-themed service that we were doing, but we were doing the service for music organizations," said trip co-leader Eddie Skolnick, a sophomore. "That's where the philosophy of Breakout comes into play -- we learn how other people do it by interacting with their organizations."
Skolnick, who began playing violin at age 5, performs with the University Orchestra and leads the Princeton Music Outreach program through the Student Volunteers Council, which currently focuses primarily on visits to area nursing homes. One of the main goals of the trip was to generate ideas for how to enhance outreach efforts back on campus.

"What I hope to do, now that I have experienced this trip and seen all of these different things in Philadelphia, is try to expand our program to encompass more diverse activities," such as performances in parks, hospitals, schools or other local venues, he said. "I also want to try to incorporate more educational elements, because I think that education is one of the greatest payoffs of music outreach."

Skolnick's co-leader, sophomore Pauline Ndambuki, has no musical background but said she wanted to participate in the trip to see how music could be used in civic engagement.

"Music doesn't seem like the most common tool for people to say they're helping the community with because when I think of music I see it not so much as a good as it is a skill, so that was really enticing to me," Ndambuki said. "Seeing the enthusiasm of the community partners, how much they're willing to put in with underprivileged communities, was really interesting to me."

Her favorite part of the trip was the visit to the preschool, where "they used music as a teaching tool for moral lessons about sharing, being friends and how to communicate with other people. I thought that was really impressive."

For Ndambuki, the Breakout trip reaffirmed her commitment to the importance of service to those who are less fortunate. "It has shown me that it's not just about help that is tangible," she said. "One can give knowledge that can help mollify, encourage and empower people during tough times." 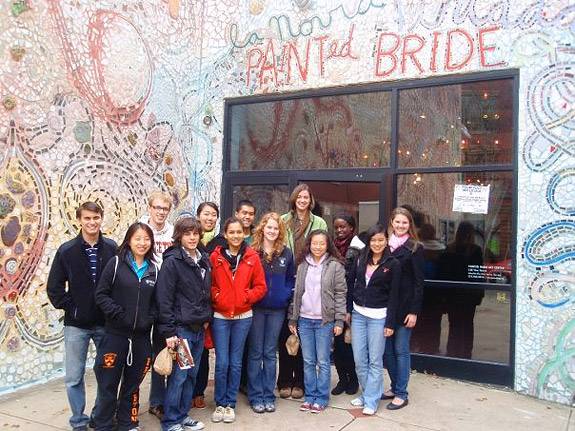 Members of "Music Outreach in Philadelphia" group stopped by the Painted Bride Arts Center in their efforts to learn how various organizations utilize music as a tool for cultural and educational enrichment. (Photo: Emma Schultz)