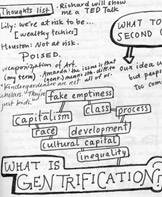 Over fall break, 91 undergraduates participated in seven student-led Pace Center for Civic Engagement Breakout Princeton trips to explore social issues in towns and cities across the United States. Junior Emily Chang sketched notes from her exploration of gentrification in New York City as part of the trip examining the intersection of urban planning, arts and community development.

Exploring the streets of New York City over fall break, a group of Princeton University students might have looked like tourists: snapping photos, admiring the architecture, chatting among themselves. But these students weren't just taking in the scenery.

As part of the Breakout trip "Hipsters and High-rises: The Socioeconomic Effects of Gentrification in New York City," 13 undergraduates spent fall break Oct. 25-Nov. 2 taking a close look at the intersections of art, urban design, gentrification and community preservation in New York.

"We both are interested in art and aesthetics," said sophomore Maryln Bruno, speaking of the trip's co-leader and her classmate, Simon Wu. "So one day we found ourselves talking about gentrification and how art facilitates the process. Soon, we were poring over articles about New York, artist culture and affordable housing. The issue just seemed so prevalent that we felt we had to dig into it more, and we knew Breakout would be a great opportunity to learn about its complexity."

The trip was one of seven Breakout Princeton trips this fall exploring social issues in towns and cities across the United States. Since 2008, the Pace Center for Civic Engagement has sponsored student-led trips during fall and spring breaks that bring together a diverse group of students to explore topics such as environmental sustainability, education, criminal justice and immigration.

In all, 91 students participated in the fall trips. The other Breakout Princeton trips were:

• "Community Voices in the City: Planning and Development in Philadelphia"

• "Learning Through Legacies: The Impact of Race on Education in Alabama"

• "The Changing Outlook on Coal: From Country to Capitol (West Virginia to Washington, D.C.)" 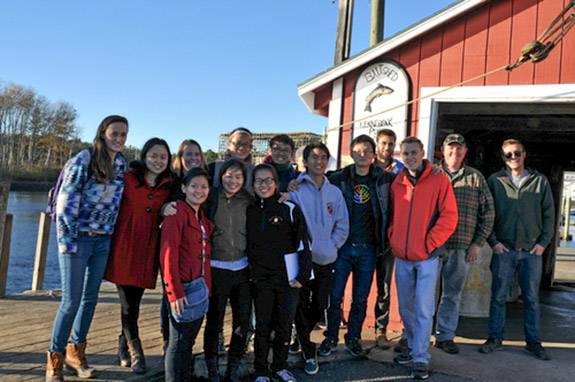 Students learn about lobster fishing at the docks in Kennebunkport, Maine, during a trip to examine coastal ecologies and the fishing industry. (Photo by Patrice McCarron, Maine Lobsterman's Association)

Each weeklong trip, which integrates service, reflection and learning, is bookended by pre- and post-trip activities, such as film screenings, dinner lectures and team discussions. The experience is designed to heighten participants' awareness of critical social issues, enhance individual growth and prepare students to engage with social issues throughout their lives.

The Pace Center establishes partnerships with University centers and departments to amplify student learning and sharing with the broader public. For example, the interdisciplinary Princeton-Mellon Initiative in Architecture, Urbanism and the Humanities helped provide greater context for the issues of gentrification and urban planning.

Aaron Shkuda, project manager of the Princeton-Mellon Initiative, and Johana Londoño, visiting associate research scholar in architecture, led two pre-trip discussions with the "Hipsters and High-rises" team. In New York, Shkuda joined the students in Soho for a tour of the former home and studio of Donald Judd, an American artist associated with minimalism. With the support of the Andrew W. Mellon Foundation, the initiative also funded the group's kayak tour of the Bronx River and a walking tour of the Dumbo and Vinegar Hill neighborhoods in Brooklyn.

"We see an organic interest in learning about issues of gentrification, urban design and planning here on campus," said Shkuda. "And we want to tap into that and support it in any way we can."

"In connecting with University centers and departments, we broaden the depth and scope of experiential learning that takes place through Breakout," said Keira Wilson, program coordinator at the Pace Center. "This happens both in terms of helping students tap into the wealth of knowledge and expertise that the Princeton campus community has to offer, as well as building bridges for students to continue to explore and take further action when they return from the field." 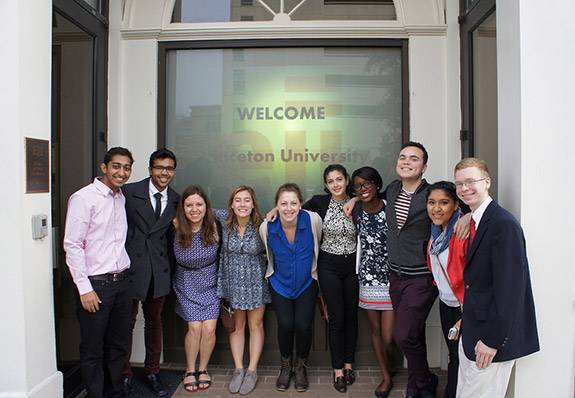 Students visit Equal Justice Initiative, a nonprofit organization in Montgomery, Alabama, that provides legal representation to indigent defendants and prisoners who have been denied fair and just treatment in the legal system, as part of the Breakout Princeton trip exploring the pervasive legacy of race on education today. (Photo by Ellis Liang, Class of 2015)

The students who went to Maine focused on a variety of topics relating to fisheries including fisher livelihoods, aquaculture and indigenous people's rights.

Returning to campus, Katherine Smith and Michelangelo Ball Van Zee, seniors majoring in ecology and evolutionary biology, are examining ways to share what they've discovered. They want to make sure Princeton is using the most sustainable seafood practices, in terms of codes and guidelines, as well as finding out more about local sustainable seafood options.

"At Princeton, with dining halls, eating clubs and free food everywhere, it's easy to detach yourself from the source of what you're eating and its environmental and social impact," said Smith. "One of the most tangible elements of ecology in human activity is fisheries."

"We're going to be meeting with Smitha Haneef, executive director of Campus Dining, to have a broader discussion about how decisions are made here on campus and if we need to make any changes," Smith added.

For sophomore Hannah Srajer, co-leader of the Alabama trip with junior Tumise Asebiomo, a politics major, Breakout solidified her drive for education reform. The group met with school leaders, policymakers and nonprofit organizations, in the context of the 50th anniversary of the Civil Rights Act, to examine the impact of the pervasive impact of race on education today.

"Growing up in Chicago my high school was very diverse, but the honors and AP classes did not reflect that diversity," said Srajer. "Tumise and I decided to create this trip because we wanted to go to the root of the issue. We wanted to see what's at the heart of the work being done and transfer what we learn here to what we do in life."

Srajer, who is considering majoring in politics, said, "I now want to go to law school."

Students who participated in Breakout Princeton chronicled their experiences via blogs and social media. 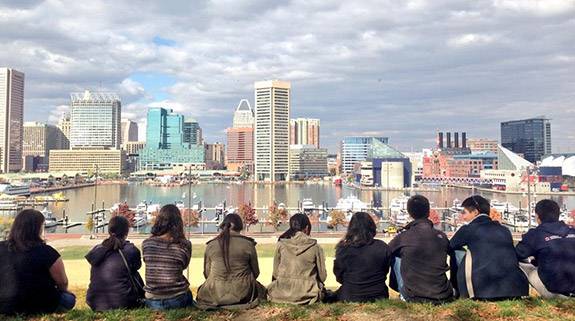 Looking over the Baltimore harbor and skyline, students take a break from exploring how music education is fostering social change. (Photo by Lydia Cornett, Class of 2016)