by Marlyn Bruno, Class of 2017, for the Pace Center for Civic Engagement

Standing outside the gated community of Flora Place in St. Louis, Missouri, 10 Princeton University students could not help but notice the inequalities a few city blocks could reveal.

"As we traveled south from Flora Place, the houses became more decrepit and abandoned, yet we were not even three blocks away from the massive 'middle-class' homes we had seen only a few minutes beforehand," observed sophomore Chandler Cleveland.

As one of six Breakout Princeton trips this fall, "Where Do We Go From Here? Community Organizing in the Wake of Crisis" sought to investigate community organizing in response to systemic racism and racial violence. Led by sophomores Robia Amjad and Ify Ikpeazu, the trip worked closely with established grassroots organizations in the St. Louis County to find out how to create and promote sustainable activism. The students spent much of the week in Ferguson, Missouri, where a series of protests were held in 2014 following the fatal police shooting of Michael Brown. 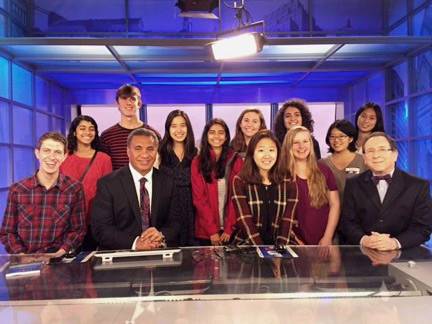 About 55 Princeton students spent fall break participating in one of six Breakout Princeton trips sponsored by the Pace Center for Civic Engagement. Students learning about journalism as a tool for social justice toured Philadelphia's NBC 10 broadcasting studio. (Photo by Lexi Mairone, Class of 2017)

Since 2008, the Pace Center for Civic Engagement has sponsored Breakout Princeton trips for students to spend their fall and spring breaks exploring topics such as poverty, education, environmental sustainability and urban development. The trips are planned and led by students. A total of 55 students participated in this year's fall trips that also included:

Breakout Princeton provides opportunities for students to explore social issues outside an academic setting and see how communities are directly affected. Student leaders select a variety of participants with different levels of familiarity with the issues in question. Before departure, student leaders facilitate pre-trip activities such as dinner discussions and film screenings to give participants a foundation of knowledge about the topic. 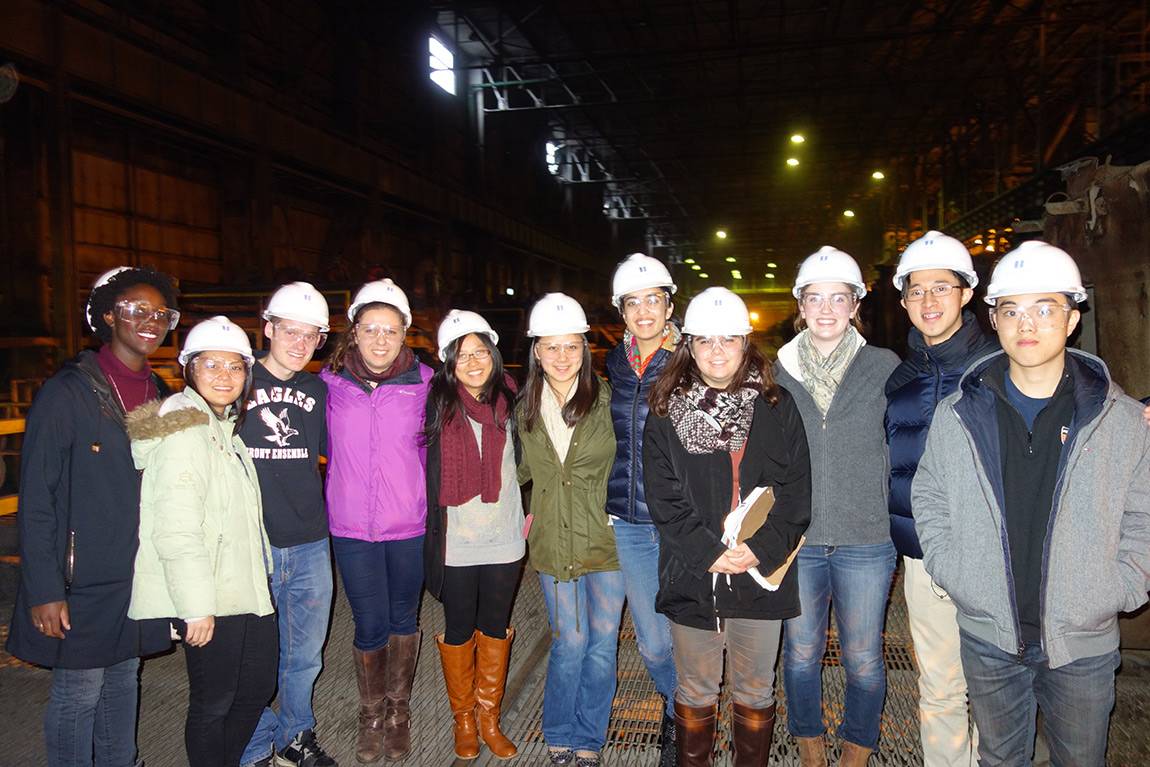 Students met with representatives of PolyMet, a Minnesota mining company, as part of their Breakout Princeton trip investigating the sometimes-conflicting interests between environmental protection agencies and labor groups. (Photo by Lloyd Feng, Class of 2019)

Junior Colleen O'Gorman has spent three years involved with the program, first as a participant and then as a trip leader. Now a trip coordinator, she said, "Breakout Princeton creates an amazing community of people who are both idealistic in their desire to bring positive change while also humble about their ability to know the solutions to the problems that communities face."

As a participant on the Community Organizing trip in St. Louis, sophomore Avanthi Cole said: "Being a part of the Black Student Union and taking a lot of African American studies classes, I feel like I'm learning about black oppression from a very academic or theoretical standpoint, but I'm not seeing the whole picture. My reason for coming here [St. Louis] is to be able to talk to people who are actually living this, and experiencing these events firsthand." 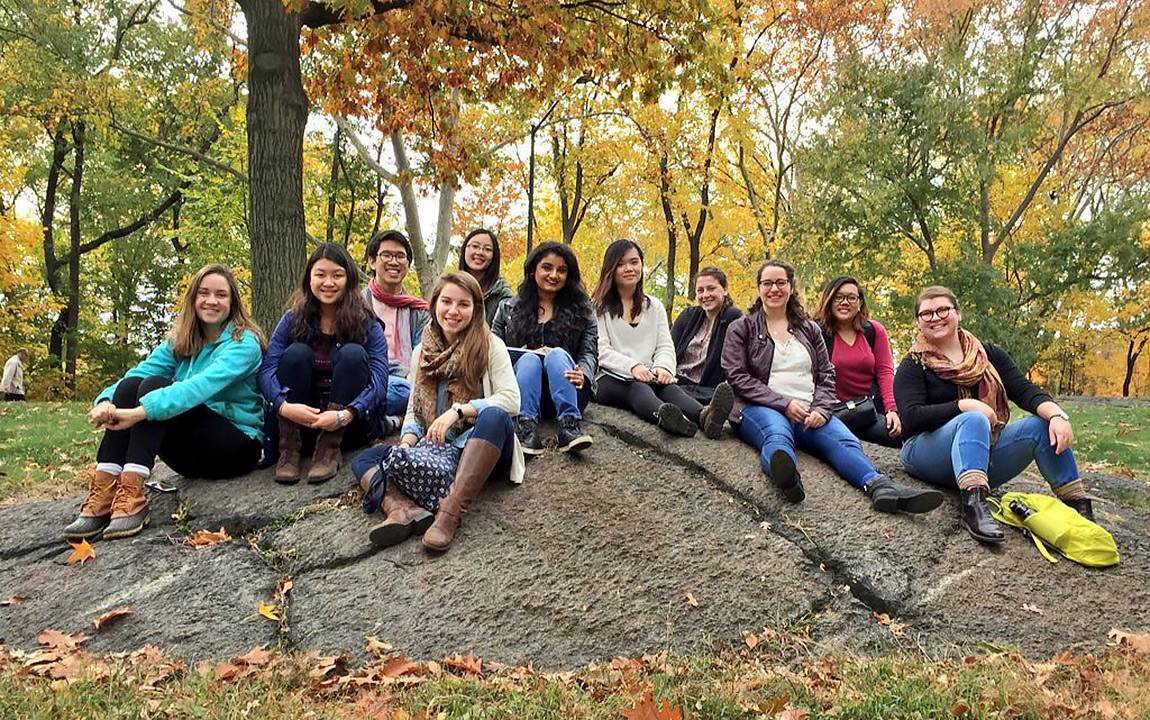 After a morning meeting, students on the “Sex, Sexism and Sexuality” trip relax in Central Park. The group spent a week in New York City meeting with organizations involved in the feminism movement. (Photo by Lawrence Liu, Class of 2016)

For participants in "Breaking News," the marginalized communities in Philadelphia were a central focus. The group was able to meet with prominent journalists including the Philadelphia NBC news team and former investigative reporter and Seattle Times executive editor David Boardman, dean of the School of Media and Communication at Temple University. During the week, students examined the responsibilities of media outlets as trusted news sources for communities.

"A large part of the power [of journalism] lies in collecting and sharing the stories of people within the community, but doing so in a way that contextualizes the issue at large," said sophomore Sarah Sakha.

Part of Breakout Princeton's mission statement is to foster individual growth through engagement with communities. Every trip contains a learning component to train students to become critical thinkers of contentious social issues. Trips often team up with a variety of organizations to provide differing opinions on the same topic.

In Minnesota, juniors Marie Siliciano and Kelly Zhou led a trip analyzing a new nonferrous mining project proposed by PolyMet, a mining company. Throughout the week, they met with key stakeholders in the Iron Range region, including environmental protection groups, community members and the mining companies themselves. The proposed PolyMet mine has the potential to stimulate the region's labor economy, though some in the area are concerned about risks to nearby water sources. 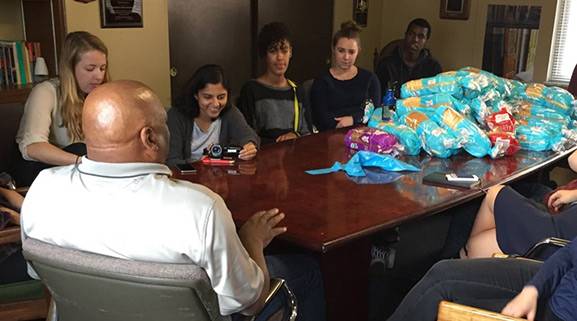 Students on the Breakout Princeton trip about community organizing in the wake of a crisis met with the Rev. Tommie L. Pierson of Greater St. Mark's Church to discuss the church's projects serving the local St. Louis, Missouri, community. (Photo by Charles Wade of Operation Help or Hush)

"Seeing how this mining decision would affect personal communities gave us a new perspective we weren't necessarily expecting and really challenged us to take in the arguments from both sides to shape our own conclusions," Zhou said. "Nobody left the trip with the same stance they entered the trip with regarding the issue, which is really cool because it shows how intricate and layered the issue really is and how much we didn't know or realize going in."