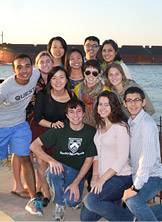 During a Breakout Princeton trip over fall break, 12 Princeton students visited coastal communities in and around New Orleans to examine how the region has responded to the BP Deepwater Horizon oil spill 18 months ago, as well as the long-term effects of Hurricane Katrina, which devastated the area in 2005. While visiting the Louisiana coastal parishes to meet with community members, the students stopped at Fort Jackson to see the Mississippi River. The trip was one of six Breakout excursions this fall designed and led by students to learn about and take action on issues of public significance in communities across the country.

On the evening of April 20, 2010, an enormous explosion inside BP's Deepwater Horizon oil rig caused the structure to burst into flames before it eventually sank into the Gulf of Mexico. For the next 87 days, oil flowed unabated into the Gulf, leading to the contamination of more than 490 miles of coastline in Louisiana, Mississippi, Alabama and Florida, making it the largest accidental marine oil spill in history.

Eighteen months later, a group of 12 Princeton University students traveled to coastal communities in and around New Orleans to examine how the region has responded to the disaster. The trip, held over fall break from Oct. 30 to Nov. 5, was one of six Breakout Princeton trips, which are designed and led by students to learn about and take action on issues of public significance in communities across the country. The trips are overseen by Princeton's Pace Center for Civic Engagement.

The Breakout trip, titled "Eighteen Months After the Gulf Oil Spill: Challenges and Triumphs," allowed the Princeton students to explore first-hand the perspectives of people involved in the region's recovery through environmental groups, nongovernmental organizations, educational efforts, local industries, corporations and governmental agencies. Along with the Pace Center, the trip was sponsored by the Princeton Environmental Institute (PEI) and the Center for African American Studies.

"We wanted to see, from the ground level, how these people are still struggling, and what's being done to alleviate that struggle," said junior Jack Ching, who led the trip with classmate Katherine Huang. "Engaging people on the community level really drove home the need for understanding a population in ways that we would not have gotten in any other way." 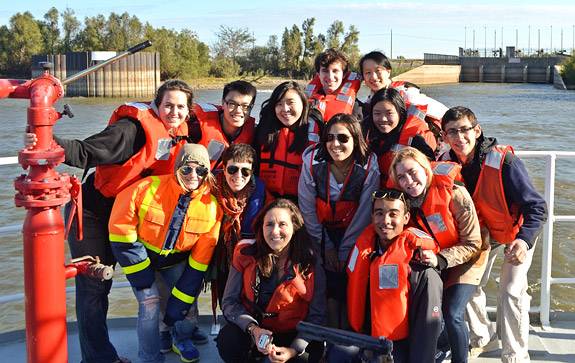 The trip participants gather in front of a levee along the Mississippi River while on a private tour with the Port Authority of Plaquemines Parish to learn more about river commerce and the levee diversion projects after Hurricane Katrina.

The Princeton contingent followed an itinerary packed with travel and conversation with dozens of experts, community leaders and Gulf area residents. During their second day in Louisiana, the students met with a panel — including a commercial fisherman, representatives from local parishes and faculty from Tulane University — assembled by the Greater New Orleans Foundation, a philanthropic organization whose long-term goal is to help strengthen coastal communities against future environmental catastrophes.

"One of the things I enjoyed the most was that we covered so much ground and looked at this issue from every possible angle," senior Jacquelyne Nesbit said. "I feel like we understand the point of view of the fishermen, community organizations, college students — a holistic perspective that made this an experience unlike anything I've done before."

Senior Ruth Nachmany, a coordinator of the trip, said that such a wide array of perspectives helped her understand an important dynamic in the region — namely that there is a symbiotic relationship between the fishing and oil industries. This realization, she said, added a layer of tension and complexity to a matter she and her fellow students had not previously considered.

"A lot of reefs build up on these large oil rigs, which help support an important ecosystem," Nachmany said. "Also, a lot of people there can't really be against the oil industry, because if you're a fisherman, your brother or cousin or father might work in oil. It's a more complex and nuanced relationship than we as students understood before going there."

The students also met with Sarah Hogarty, a member of the Class of 2010 who is participating in Teach for America in Louisiana, taking the opportunity early in the trip to visit her school in Plaquemines Parish and engage with students and community members in discussing the disaster and the region's recovery.

Sophomore Steven Russell said it was during this particular part of the trip that he realized something significant: In addition to the BP disaster, Hurricane Katrina, which devastated the region in 2005, still weighs heavily on the hearts and minds of the people there.

"I met a seventh grade girl at the school we visited, and when she talked about her life she defined everything as pre-Katrina and post-Katrina," Russell said. "It really hit home for me just how significant that hurricane was and how these people were just on the verge of recovery when the BP disaster happened."

Learning all sides of the issue

The middle of the week offered a dynamic and challenging experience for the students as they met with a representative from BP for an eight-hour question-and-answer session that included an overview of the oil company's efforts in the cleanup, community restoration, and financial restitution for fishermen and local businesses affected by the spill.

According to senior Mikia Weidenbach, the meeting helped her and her peers see that the situation was more emotionally and environmentally complicated than they previously expected. After talking to several fishermen and families earlier in the week, many of whom grew tearful when recalling the ecological and economic devastation wrought by the spill, Weidenbach said sympathies were overwhelmingly on the side of community residents.

"After that meeting though, we all swayed back and forth on the issue, because we came away understanding the massive scale of the recovery efforts, and were even somewhat impressed by what BP has been able to accomplish in the last 18 months," Weidenbach said. "We realized no one is entirely right or entirely wrong in this." 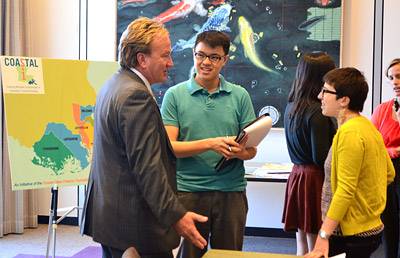 The trip included conversations with dozens of community leaders, experts and Gulf area residents as the students explored the multifaceted impact of the oil spill. At one panel event, Jack Ching, a junior (center), and Ruth Nachmany, a senior (right), took the opportunity to speak with P.J. Hahn, director of Plaquemines Parish Coastal Zone Management.

This is precisely the sort of awareness that Andrew Nurkin, senior program coordinator at the Pace Center, hoped the students would gain.

"In the 18 months since the spill, the public narrative about blame, effects and recovery has calcified into overly simple terms," Nurkin said. "I hope that the students on the trip learned that the situation on the ground is both immensely complicated, and still experienced every day by individuals living and working in the affected areas."

Closing out the week, the Princeton students met with Craig Taffaro Jr., president of St. Bernard Parish, who took them on a tour of Camp Hope 3, a 300-bed facility that houses and feeds volunteers engaged in rebuilding the region.

They also met with representatives of the Mary Queen of Vietnam Community Development Corporation, which was established by community leaders in 2006 to assist Vietnamese Americans in New Orleans in rebuilding their community after Katrina, while also providing them a voice to address concerns.

"We realized that these Vietnamese fishermen have a huge presence there, but that they aren't very involved in the political system and have very little voice in fighting for claims and restitution after the spill," Ching said.

On the day before returning to campus, the Princeton students met members of the Louisiana Office of Tourism and the Louisiana Restaurant Association, who emphasized that the restoration of the region's reputation has been just as important as work to restore its infrastructure and ecology.

"This unique hands-on experience provides our students with a vital glimpse into the complexities of environmental issues, including the scientific, technical, policy and social dimensions that influence perception and reality of current events," said Kathy Hackett, associate director of PEI. 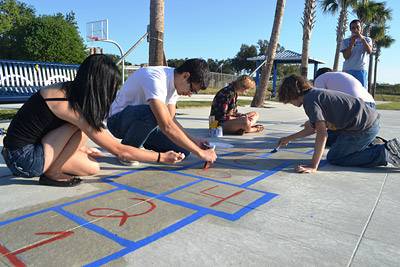 After meeting with community members of the Plaquemines Parish at a newly built YMCA in Port Sulfur, Princeton students help paint hopscotch lines for a new playground.

According to Nurkin, student interest in the Breakout Princeton program has grown steadily since it was launched in 2008. The Pace Center received 180 applications this semester, up from 120 applicants last spring and 80 in 2008. Including trip leaders and coordinators, a total of 72 students participated in the fall program.

In addition to the Gulf visit, the roster of fall trips included: "Childhood Obesity and the Built Environment: Solutions in Chicago"; "Financial Literacy and Consumer Debt in Las Vegas, Nevada"; "Business on the Bayou: Social Entrepreneurship and the Power of New Ideas"; "Female Incarceration in Oklahoma"; and "Labor Unions in Washington, D.C."

For Nesbit, the Gulf Breakout trip further illustrated the importance of engaging with communities on an intimate, personal level, adding that her journey to the region broadened her perspective in numerous ways.

"It's so easy when you're a student to get caught up in your own world," Nesbit said. "To take yourself out of that and totally immerse yourself in other peoples' lives and a region's problems is a great experience, and definitely one I will remember for a very long time."