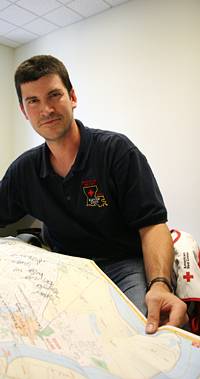 Princeton staff member Trey Green just returned from spending two weeks in his home state of Louisiana with the Red Cross, procuring supplies for shelters housing hurricane victims. He used this map of Baton Rouge, where he was stationed, to navigate around the city. The signatures on the map are from his Red Cross teammates.

As he watched the distressing images on television in late August of the victims of Hurricane Katrina, Chris Carter decided he needed to do something to help.

"I was left with this nagging desire to demonstrate that the fears expressed by some of the people on the Gulf — that no one cared about them, that they were being forgotten — were not true," said Carter, who is the associate director of Princeton's government affairs office in Washington, D.C. "I thought about the range of things I could do, including writing a check, which is what I typically would do. But then I thought, could I do something more?"

Carter considered traveling to Louisiana to volunteer, but he wasn't sure how he could manage the trip financially if he took a leave of absence from work. Then he received an e-mail outlining a new University policy that would enable him to help. Princeton's Humanitarian Relief Effort Policy, announced four days after the hurricane hit, provides University employees with the chance to take a two-week paid leave to volunteer with agencies working in the Gulf Coast.

"There was my opportunity," Carter said.

He immediately contacted the Red Cross and arranged to participate in an expedited training session. He departed for the region on Sept. 15.

Carter is one of eight Princeton employees who are already in the Gulf Coast doing volunteer work or who are making arrangements to go.

"There has been such an expression of wanting to help from employees," said Lianne Sullivan-Crowley, vice president for human resources, who is administering the policy. "One of the ways Princeton can support that is to allow people the room to help in their own way."

Michael Maita, who works at the facilities department's customer service center, is waiting to learn when he will be leaving for the area. Maita already has training in emergency and disaster services as a Red Cross volunteer. He also helped with hurricane relief during the three years when he was a Marine.

"I know it will be a very stressful environment, but I think I'm as prepared as I can be," said Maita, who has worked at the University since 2002. "People there have lost everything at once — homes, families, schools. It's time for us all to chip in and help."

The Rev. Paul Raushenbush said he felt his skills as a religious counselor who has worked with people of different faiths would be helpful to victims of the hurricane. Raushenbush was scheduled to travel to Houston on Sept. 25 to work with the Interfaith Ministries of Greater Houston, which is helping those who have been placed in long-term temporary housing to get acclimated to life in Houston. He also is offering chaplaincy services to elderly victims who are in shelters in Houston.

"It will feel so good to do something," Raushenbush said. "I've given money, but to actually go down there and feel like I'm offering a small amount of help is great. Part of the University's mission is to offer service to other citizens."

Trey Green, who is a technical support specialist in the Office of the Dean of the College and the Office of the Dean of Undergraduate Students, just returned from spending two weeks in his home state of Louisiana with the Red Cross. He went to Baton Rouge, where he worked 14-hour days procuring supplies like forklifts, portable toilets and mobile shower trailers. The area has 130 shelters housing more than 20,000 hurricane victims.

"It was a huge challenge to get supplies into the area," Green said. "We were calling local businesses, asking vendors to share resources. The phones were always tied up, so you had to be patient. At times the task seemed overwhelming, but you could see everyone keep pushing to get what was needed."

He spent his days at a makeshift office set up in a former Wal-Mart store, working with volunteers from Minnesota, Alaska, California and Wyoming, among other places. At the beginning of Green's second week, a new member joined his team -- Peter Stalker, a member of Princeton's class of 1980 from New Canaan, Conn.

The volunteers were forced to be inventive. When they couldn't locate any pre-fabricated shower trailers, someone came up with the idea of converting a mobile contamination treatment unit into showers.

Green's visit to a shelter in Gonzales, La., that housed 1,000 people was poignant.

"Everyone there looked a little glazed over," he remembered. "It's sobering when you see these folks."

Only when he returned to Princeton did Green realize how exhausted he was from the two weeks of non-stop work. But he is grateful for the opportunity he had to help.

"As tough and as frustrating as it was, I would do another three weeks if I could go back," he said.

Sandra Hambrecht is working on arranging a trip to the Gulf Coast to put to use her skills as a trained veterinary assistant.

"I have a very strong love for animals and a strong sympathy for people who were forced to leave their pets behind," said Hambrecht, a bibliographic specialist in Firestone Library. "I hope I will be able to reunite animals with people."

Wayne Bayles, a building access control manager in the TigerCard Office, is scheduled to leave for the region on Oct. 1. He has no idea what the Red Cross will have him do once he gets there, but he doesn't mind pitching in on any chore.

"Our office is very proud of Wayne and not at all surprised that he volunteered," said his supervisor, Elisabeth Dahlen. "He looks for ways to contribute to his country."

"I just want to help as best as I can," Bayles said. "If I help one person, I will have accomplished what I set out to do."