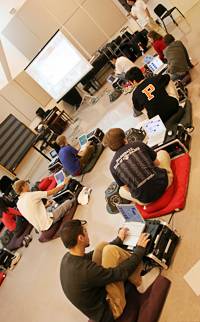 The Princeton Laptop Orchestra rehearses in the basement of the Woolworth Center of Musical Studies. The experimental group, which performs on laptop "instruments" invented specifically for the class, was created by faculty members Dan Trueman and Perry Cook as a freshman seminar this fall.

Below left: Dan Trueman (right) works with Jason Yang at his station, which includes an Apple PowerBook, a special six-speaker hub, an audio interface, a power unit and a six-channel amplifier. Students supplement their stations by adding keyboards, graphics pads, sensors and other extensions as they see fit.

Pass by the basement rehearsal space in Woolworth on a Thursday afternoon and you may hear electronic raindrops, a fast-forward reading of Dr. Seuss or a deep moaning that seems to emanate from the bottom of the ocean. You may even hear something you recognize as music, like a rockabilly jazz melody.

It’s hard to predict just what the Princeton Laptop Orchestra (PLOrk for short) will play next, and that is exactly the point according to computer music mavericks Perry Cook and Dan Trueman, who assembled the orchestra as a freshman seminar this semester.

The orchestra is the first of its kind — an experimental group that performs on laptop “instruments” invented specifically for the class. Students play their laptops with a new music language — known as ChucK — written by Princeton computer science doctoral student Ge Wang.

At a recent class the 15 freshmen broke into ensembles and, seated on red, mauve or brown pillows, performed pieces they had composed themselves.

The first group played a tune with a Euro-pop beat that could have served as part of the soundtrack for the film “Ocean’s 11.” The next was a surreal piece called “The Inner Workings of Anna’s Mind,” which featured the voice of freshman Anna Wittstruck being twisted and contorted beyond recognition. During the final performance, a stocking-footed Bixiao “Brian” Zhao danced his ensemble’s bass line on foot-pad sensors.

Trueman, an assistant professor of music, and Cook, an associate professor with joint appointments in computer science and music, see the class as a way to introduce students to the rich field of electronic music and let them explore musical ideas that would not be possible with even the most sophisticated commercially available software. In the end they hope that students see both music and computer science in a new light.

Only a few of the freshmen had substantial programming experience. But those who didn’t quickly got up to speed.

“It’s ideal,” said freshman Theo Beers. “I’m a musician, not a programmer, so if I was ever going to learn programming this had to be the way.”

Working with graduate students Wang and Scott Smallwood, Trueman and Cook configured the PLOrk stations specifically for the class. Each unit consists of an Apple PowerBook, a special six-speaker hub, an audio interface, a power unit and a six-channel amplifier. Students supplement their stations by adding keyboards, graphics pads, sensors and other extensions as they see fit.

In Trueman’s office, outside of class, the two professors riffed on each other’s thoughts in a way only two close friends can (Cook was Trueman’s doctoral adviser at Princeton 10 years ago).

They discussed, for example, how ChucK differs from Apple computer’s GarageBand or Image Line’s Fruityloops software — both programs that allow the average person to compose music on a laptop computer. “Those are not power tools,” Cook intoned with mock snootiness.

Trueman amplified that thought: “When you write in their program you’re submitting to their vision of what music is; with ChucK you have to invent. You have to construct your own values into your system.”

One of ChucK’s unique characteristics is that it encourages performers to modify code on the fly, while they are performing. This means that the code, or the score, is different at the end of session than it was when the performance began.

Freshman Zach Marr said that he found ChucK harder to use than commercial programs. “But it gives you a lot more freedom,” he said.

While the programming is technically difficult, the students also are having to struggle more philosophically with their fundamental conceptions of music.

“There is no one more self-confident than an 18-year-old, especially when it comes to opinions about music,” said Trueman.

“They are having their view of what music is severely challenged,” Cook acknowledged.

But the students have embraced the challenge. “It’s my favorite class,” said Anna Wittstruck. “The music world all of a sudden is a much bigger place; it’s much more than just playing an instrument.”

More information about the Princeton Laptop Orchestra is available at plork.cs.princeton.edu.