Princeton University is expanding its online course offerings through Kadenze, an online learning platform specifically created to support the arts and creative technologies. On this platform, Princeton Professor of Music Daniel Trueman will offer the course "Reinventing the Piano," in which students will explore a new instrument called the Prepared Digital Piano.

Princeton is among the first institutions to utilize Kadenze, which launched June 16. Kadenze offers a range of interactive courses with unique capabilities tailored to the arts, including media–rich lessons and algorithms to analyze and measure students' performance and progress. The courses are open to learners worldwide.

"The Prepared Digital Piano is an instrument I've been creating over the last couple of years, in tandem with a host of composition projects including the Nostalgic Synchronic Etudes, a set of eight pieces for the new instrument," Trueman said.

"This course will explore this instrument and the music, though it will also delve into how and why we might build instruments like these, using the history of the piano and its music as an initial model, but also the flexibility of software as a new space for instrument building and composition," he said. 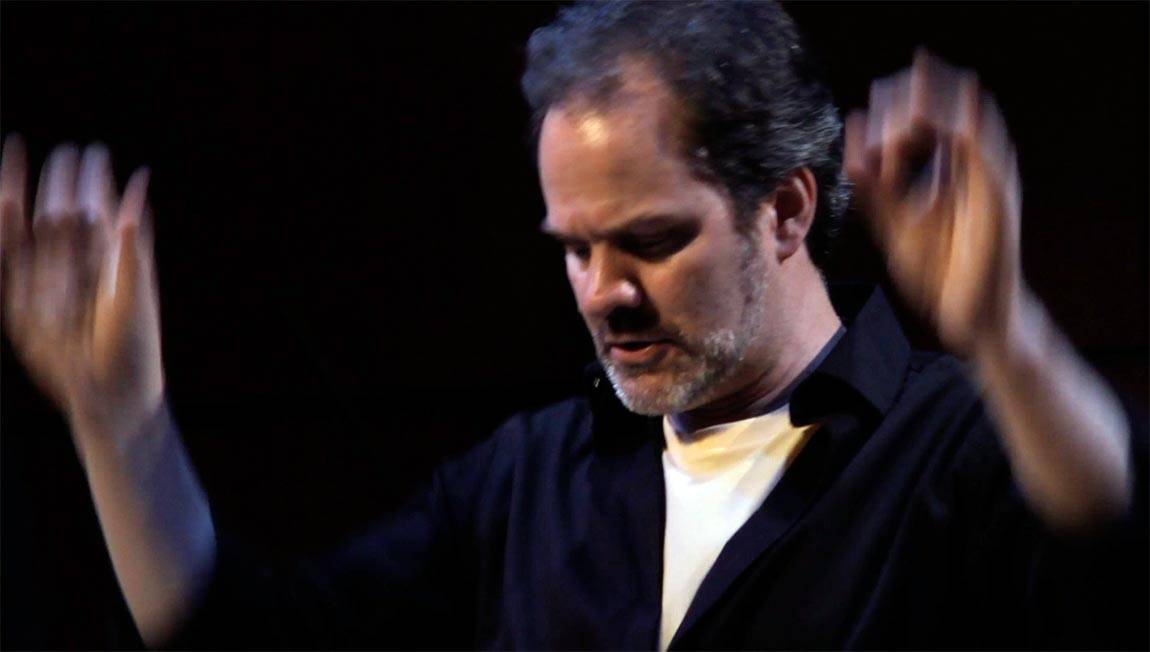 Daniel Trueman, a professor of music at Princeton, will debut a music course "Reinventing the Piano" through Kadenze, a new online learning platform specifically created to support the arts and creative technologies. (Photo courtesy of Stephen Taylor)

Jeff Himpele, the director for teaching initiatives and programs at the McGraw Center for Teaching and Learning at Princeton, said Kadenze is a significant addition to the variety of online learning environments available to our faculty, including Coursera and NovoEd, which focus largely on text- and number-based courses and less on the creative and performing arts.

Himpele said Kadenze presents the opportunity to engage with a lively community of artists and learners. "In the arts and beyond, faculty across the campus will be able to integrate this platform with their Princeton classes and enrich the student experience by extending their classroom activities into an online environment that supports new forms of creative work," Himpele said.

The development of Kadenze has a direct connection to the University.

Kadenze's cofounders are Perry Cook, professor of computer science, emeritus, and Ajay Kapur, a 2002 alumnus. Kapur met Cook his junior year when he took Cook's course "Transforming Reality by Computer." The following year, Cook served as Kapur's thesis adviser. After Princeton, Kapur went on to earn his Ph.D. at the University of Victoria, working under one of Cook's former graduate students, George Tzanetakis.

Kapur became the director of music technology at California Institute of the Arts in Valencia, and he and Cook stayed in touch. With the support of a National Science Foundation grant, they developed a curriculum to teach computer science to artists, specifically at schools without a computer science department. That led to the development of a massive open online course (MOOC), which enrolled 45,000 students and launched the idea for Kadenze.

Trueman met Cook when they both came to Princeton in 1996 and Trueman was a graduate student. Cook served as one of Trueman's dissertation advisers. In 2005, they founded the Princeton Laptop Orchestra (PLOrk) — the first of its kind in the country. Reinventing the traditional model of the orchestra for the 21st century, each "laptopist" performs with a laptop, a custom-designed speaker and a variety of control devices (keyboards, graphics tablets, sensors, etc.). Performing with these computer-based musical meta-instruments, the ensemble both emulates and pushes the boundaries of the ways traditional orchestral instruments cast their sound in space. Today, there are dozens of laptop orchestras at colleges and high schools around the country.

At Princeton, Trueman teaches seminars and the yearlong 16th- and 18th-century counterpoint sequence to graduate students in composition. He is director of the Princeton Sound Kitchen concert series, the primary venue for composers in the department to workshop and share their work. New Amsterdam Records will release the Nostalgic Synchronic Etudes, Trueman's 10th CD, in the fall. 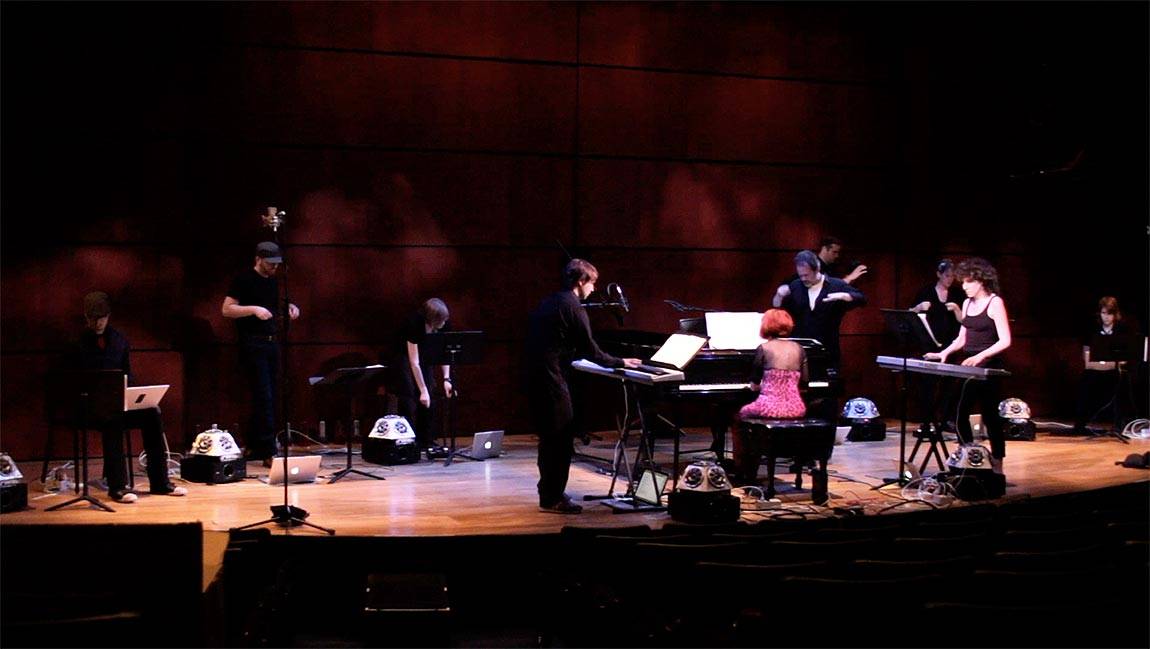 Trueman (standing behind piano) conducts Sideband, a professional offshoot of the Princeton Laptop Orchestra (PLOrk), which he cofounded at the University in 2005. Both Sideband and PLOrk feature the use of computer-based musical meta-instruments created with laptops, custom-designed speakers and a variety of control devices including keyboards and graphics tablets. (Photo courtesy of Stephen Taylor)

According to Cook, who serves as executive vice president of Kadenze, getting Trueman on board as the course author was a top priority.

"Dan epitomizes the combination of composer and programmer, performer and inventor, teacher and student for life," Cook said. "He uses technology so much in his work, but in ways that don't say 'Hey! Here's some cool technology!' but rather to make a super musical experience that's magical and new because of the technology."

Trueman said he is looking forward to seeing how this new platform might shape the learning process itself.

"I am particularly drawn to the possibility of asynchronous learning, where students can work at their own pace, sometimes binging, other times taking it slow," Trueman said. "Also, the ability to interact with automatic feedback systems — perhaps not so unlike a compiler for a programming language — in an iterative fashion offers some interesting learning possibilities,"

These possibilities include taking advantage of Kadenze's online peer assessment capabilities, something Trueman said he hasn't used much in the traditional classroom. "I can already imagine a whole host of interesting subjects and courses that could grow into this space, and how they might benefit our students in a variety of ways."

Adam Sliwinski, a member of the ensemble So Percussion, the Edward T. Cone Performers-in-Residence at Princeton, will be a guest lecturer for the course.

Three additional Princeton alumni and former faculty members are involved in Kadenze. Rebecca Fiebrink of Goldsmiths University of London, a 2011 graduate alumna and former assistant professor of computer science at Princeton, will teach "Machine Learning for Musicians and Artists." Spencer Salazar of the California Institute of the Arts, a 2006 alumnus, and Ge Wang of Stanford University, a 2008 graduate alumnus, will serve as guest lecturers for Kapur's course, along with Cook.

There are 22 courses in the Kadenze catalog.

"Kadenze offers students the opportunity to learn from the best and brightest in arts-focused education," said Cook. "We view ourselves as a bridge, and our goal is to connect students and institutions in a way that elevates everyone."

Anyone wishing to enroll in Princeton's open online courses may do so at no charge. These offerings do not result in Princeton University credit.