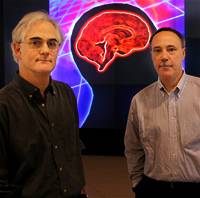 Jonathan Cohen (left) and David Tank, pictured here in front of the display wall in Icahn Laboratory, will lead the new Princeton Institute in Neuroscience.

Princeton University is expanding its teaching and research capabilities in neuroscience -- considered by many the next field ripe for significant scientific breakthroughs -- by launching an institute that will bridge many disciplines and take a new approach to studying the brain and nervous system.

"Neuroscience is one of the most exciting frontiers of human understanding right now," said President Shirley M. Tilghman. "We're seeing path-breaking results already in this field that are changing the way we understand the human brain and human decision-making. There's a deep sense that some of the most important discoveries of the next few decades will come in this field."

"We already have great strengths in neuroscience in both our molecular biology and our psychology departments, and we want to be able to build on those strengths," added Provost Christopher Eisgruber, noting that faculty members from other departments such as mathematics, physics, computer science and economics also are conducting research with applications in neuroscience. "So this is really an example of an area that is not only sizzling in terms of its scientific research right now, but that has an extraordinary capacity to span what happens throughout the University, and that is attracting students at all levels."

Under the working title of the Princeton Institute in Neuroscience, the entity was created in embryonic form last spring under the leadership of Jonathan Cohen, the Eugene Higgins Professor of Psychology, and David Tank, the Henry Hillman Professor in Molecular Biology, who has a joint appointment in physics.

This fall, a proposal prepared by the two was scrutinized and endorsed by an external review committee of leading scientists from around the country. Following a presentation to University trustees this month, administrators are moving ahead with plans for the institute, including a substantial fund-raising effort.

Cohen and Tank will serve as co-directors of the new institute (see related story). They view the enterprise as a stimulus for teaching and research in neuroscience and related fields, as well as an impetus for collaboration and education in disciplines as wide ranging as economics and philosophy.

The potential for major advancements in the study of the brain over the past 30 years has sparked the creation of some 300 training programs in this field, according to the Society for Neuroscience. The Princeton institute will take an approach that is distinctively different from other programs, according to those involved.

"Whenever there are fields like this one that are at the intersection between pure science and some work that goes on in medical schools, we always ask how Princeton can do this best so that our absence of a medical school becomes an advantage for us rather than a disadvantage," Eisgruber said. "The proposal that Jonathan and David put together really shows how Princeton can do neuroscience in a way that will be very effective here."

Princeton's institute will focus more on understanding principles of function and interaction that apply across the brain, rather than exclusively on individual components.

"In some sense, a main emphasis of neuroscience over the last century has been characterizing the elements, such as neurons and synapses, that make up a brain," Tank said. "One of the goals of the institute is to understand how the whole system works together as one unit from all of the very complex interactions and underlying parts."

Fundamental to taking this "systems approach" is an understanding of neural coding and dynamics. Neural coding refers to the way that information is represented by the activity patterns of brain cells. Neural dynamics involves how neural circuits manipulate, modify and store information in the process of controlling behavior and cognition. Examples of behaviors that rely on complex neural dynamics include perceiving a visual object, pursuing a train of thought and making a decision.

This approach will draw upon one of Princeton's historical strengths, setting the institute apart from other such programs. "Tackling these problems will require a level of quantitative description and formal theory that has not been previously emphasized in neuroscience and will further help to differentiate us," Tank said.

Princeton collaborators will bring their expertise in quantitative disciplines such as mathematics, physics, engineering, computer science and economics to bear on these questions. There will be a particular emphasis on the close connection between theory, modeling and experimentation using the most advanced technologies.

"It's all about a balance between quantitative theory and experimentation," Cohen said. "Much of existing theory has not been very precise or very mathematical, and there hasn't been an extensive use of computer simulations to understand the dynamics of brain function.

"The brain is arguably the most complex device in the universe," he continued. "There are 100 billion nerve cells in your brain, and each makes contact with thousands of other neurons, making for an overwhelmingly intricate system. Despite that fact, theories are often proposed in verbal terms."

Cohen said that Princeton has a rich environment to mine for quantitative methods that might apply to neuroscience. "Having access to the sorts of tools that engineers have developed for studying complex systems -- turbulence, weather patterns, fluid flow -- as well as those that mathematicians and statisticians have developed for creating new algorithms specifically tuned to the sorts of data we collect is an incredible advantage.

"We hope to be quantitatively sophisticated in two ways: with regard to the development of precise, formal theories about how the brain works and gives rise to behavior and the mind; but also in maintaining our capacity for doing state-of-the-art experimentation and being able to analyze the large data sets that it generates," he said.

Read Montague, the Brown Foundation Professor of Neuroscience at the Baylor College of Medicine and a visiting member of the Institute for Advanced Study, applauds Princeton's efforts to more closely connect theory and experimentation.

"In a bold move that recognizes the growing need for a close collaboration between theory and experiment in neuroscience, Princeton University is one of the first to recognize the need to organize leading theorists and experimentalists under a single entity," he said. "In the past, various foundations ... have invested in theoretical approaches to neuroscientific problems; however, the need is bigger than such efforts can adequately address. I suspect that many institutions will follow Princeton's lead in the near future, and we will see institutes for theoretical and experimental neuroscience popping up at universities all around the world."

The establishment of the new institute is a continuation of the pace-setting role that Princeton's neuroscience program has played, according to another scientist.

"The Princeton neuroscience group has a spectacular history of experimental innovation, and strength in theory and computation that runs from math and physics to biology and psychology," said Cori Bargmann, the Torsten N. Wiesel Professor and head of the Laboratory of Neural Circuits and Behavior at Rockefeller University.

"On the experimental side, they're known for developing new and better ways to watch the brain work, whether that's the whole brain or just one part of one neuron," said Bargmann, a member of the external review committee that evaluated Princeton's proposal. "But the brain is complex, and theoretical and quantitative approaches are going to be central to understanding cognition, thought and higher-order brain function. Some of the most influential and provocative theories about the nervous system have been generated by Princeton scientists. What's special here is the extent to which theory and experiments will inform and challenge each other."

One of the most important objectives of the new institute will be to provide Princeton undergraduates and graduate students with training at the forefront of neuroscience.

"We intend for the institute to have a very strong teaching mission, both at the undergraduate and graduate level," Tank said. "There is growing interest among the undergraduates in this discipline, and the institute will support the classrooms and laboratories needed for our curriculum leading to the neuroscience certificate."

Princeton has been steadily strengthening its resources in neuroscience since the late 1990s, when it stepped up faculty recruitment in the field through the efforts of Thomas Shenk in molecular biology and Joan Girgus and Marcia Johnson in psychology. In 2001 under the leadership of Cohen and Lynn Enquist, now chair of the molecular biology department, Princeton established an undergraduate neuroscience certificate program that has enrolled in it 30 students each year. That program, which is growing in size, will be housed in the institute, along with the graduate program in neuroscience, which currently enrolls about 50 Ph.D. students spread across seven departments.

Cohen and Tank plan to integrate, consolidate and expand the curriculum for both programs and to hire new faculty to teach and conduct research. Faculty members will have joint appointments with the institute and with their home departments.

In addition to providing centralized curricular resources for students and faculty, the institute will offer access to state-of-the-art instruments for studying the brain. In 2000, the University acquired a functional magnetic resonance imaging (fMRI) scanner, becoming the first institution to have a human brain imaging facility outside of a medical setting. The University also has high-tech facilities for optical laser scanning microscopy that can monitor and control signaling in individual neurons.

With successful fund-raising efforts, the directors hope to bring the various advanced instrumentation facilities as well as new teaching laboratories together in one location, and create a unique, integrated facility that will span from the study of single neurons to whole brain function under a single roof. The campus planning project will consider potential locations for such a facility, focusing principally on areas along Washington Road south of Icahn Laboratory, home of the Lewis-Sigler Institute for Integrative Genomics.

The two see the new institute as a place that will not only serve as a resource for study in the scientific disciplines, but one that will reach into many other fields as well.

"There's a burgeoning interest in the role that neuroscience is beginning to play in a variety of other fields, including the social sciences, the humanities and even the law," said Cohen. "The Supreme Court last year had a case in which it cited brain imaging evidence as a relevant factor. This raised serious questions about the current state of such evidence, and how it should be interpreted. We should be educating the next generation of people who are going to be in the law and on the benches to understand what these data mean.

"There are also growing interactions between neuroscience and other disciplines, such as ethics and economics," he continued. "For example, advances in our ability to image brain activity have begun to raise questions about how much such methods can tell us about people's internal mental states, and how such information could and should be used. Brain imaging studies have also begun to address questions about the very basis of our ethical principles, for example to what extent these are influenced by emotional responses in addition to rational principles. And studies of people making economic decisions have raised similar questions. Traditionally, these questions have been the province of the social sciences and philosophy. Now, however, neuroscience is beginning to provide evidence that is directly relevant to these questions."

"The importance of neuroscience is going to grow over the coming years into disciplines you wouldn't have previously thought were related," Cohen said.