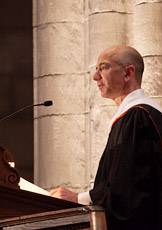 Jeff Bezos, shown speaking at the University's 2010 Baccalaureate ceremony, and his wife, MacKenzie Bezos, both alumni, are donating $15 million to establish the Bezos Center for Neural Circuit Dynamics in the Princeton Neuroscience Institute.

Princeton University alumnus Jeff Bezos, the founder and chief executive officer of Amazon.com, and alumna MacKenzie Bezos, are donating $15 million to the University to create a center in the Princeton Neuroscience Institute. The gift will establish the Bezos Center for Neural Circuit Dynamics, which will be led by institute co-director David Tank.

"Professor Tank and his colleagues are on an epic quest to unravel one of humankind's greatest challenges — understanding the brain," said Jeff Bezos. "New tools and techniques are making possible discoveries that would have been unthinkable just two decades ago. We can hope for advancements that lead to understanding deep behaviors, more effective learning methods for young children, and cures for neurological diseases. MacKenzie and I are delighted and excited to support Princeton in their focus on fundamental neuroscience."

Princeton President Shirley M. Tilghman expressed her thanks for the gift, noting that the Bezos Center for Neural Circuit Dynamics will bring the University's strengths to bear on a frontier of scientific knowledge that has far-reaching implications for the understanding of behavior and the treatment of neurological disorders.

"I am deeply grateful to Jeff and MacKenzie for so generously supporting this critical initiative," Tilghman said. "The Princeton Neuroscience Institute is grappling with some of the most fascinating questions in the scientific world today, and the Bezos Center will significantly advance our understanding of how the brain works by taking full advantage of Princeton's strong tradition of multidisciplinary collaboration, its pre-eminence in quantitative and theoretical sciences, and its leadership in developing scientific instrumentation."

At the Bezos Center, researchers will be looking for patterns of activity that reveal, for example, how decisions are made or memories are recalled. At the microscopic scale, the brain consists of vast networks of neurons that are wired together with synaptic connections to form neural circuits. Each neuron can have electrical and chemical activity different from that of its neighbors. As neurons become silent or active, the pattern of activity shifts. These changing patterns are called neural circuit dynamics.

"Advances in technology for measuring and manipulating the activity in neurons are revolutionizing our ability to examine how neural circuits operate in the brain," said Tank, the Henry L. Hillman Professor in Molecular Biology. "In parallel, new methods for 'connectomics' are capable of determining the wiring diagram of neural circuits. The new Bezos Center will focus on using these new technologies together to probe basic mechanisms of brain function such as sensory perception, memory and decision-making."

Tank also is co-director with Jonathan Cohen, the Eugene Higgins Professor of Psychology, of the Princeton Neuroscience Institute, established in 2005. The institute already has made significant contributions to the field by building on Princeton's achievements in quantitative and computational approaches, brain-imaging studies and microscopy. It has attracted a top-ranked group of faculty, and established an undergraduate certificate program and a Ph.D. program that are drawing students from around the world.

Work within the Bezos Center for Neural Circuit Dynamics will involve collaboration with the Princeton Institute for Computational Science and Engineering, a consortium of scientists and engineers who use high-end computing in their research. In addition, Princeton's theoretical and computational neuroscientists, who excel in producing mathematical descriptions of brain operations, will work side by side with experimentalists, who will test theories of brain function.

The home of the Bezos Center will be within a new complex under construction on the south edge of Princeton's campus near the Icahn Laboratory that will house the Princeton Neuroscience Institute and the Department of Psychology. The facility is expected to open in the summer of 2013.

Because of his pioneering work, Jeff Bezos was selected to speak at Princeton's 2010 Baccalaureate ceremony. He attended the service with his wife, MacKenzie, and spoke to the audience about making choices in life. "Cleverness is a gift, kindness is a choice," Jeff said.

"When you are 80 years old, and in a quiet moment of reflection narrating for only yourself the most personal version of your life story," he said, "the telling that will be most compact and meaningful will be the series of choices you have made."