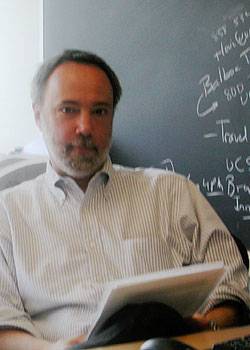 David Tank, Princeton's Henry L. Hillman Professor in Molecular Biology and co-director of the Princeton Neuroscience Institute (PNI), is a member of the steering committee for the federal BRAIN Initiative.

Princeton University neuroscientists are poised to play a leading role in revolutionizing our understanding of the human brain as outlined in President Barack Obama's BRAIN Initiative.

On April 2 the president announced a comprehensive research effort aimed at exploring how the brain works and providing new tools for understanding disorders such as Alzheimer's disease, schizophrenia, autism, epilepsy and traumatic brain injury. BRAIN stands for Brain Research through Advancing Innovative Neurotechnologies.

Obama compared the scale and ambition of the project to the highly successful Human Genome Project. It would encourage researchers to develop new and improved methods for studying the complex neural circuits that govern thoughts, feelings and behavior. A major goal is to produce dynamic pictures of the brain that show how populations of individual neurons work together at the speed of thought.

The president's announcement could not be more timely for the Princeton Neuroscience Institute (PNI). Eighteen months ago Princeton announced the founding of the Bezos Center for Neural Circuit Dynamics, established with an extraordinary gift from Amazon.com founder and CEO Jeff Bezos, a member of Princeton's Class of 1986, and his wife MacKenzie, a member of the Class of 1992. The center is led by David Tank, co-director of PNI and the Henry L. Hillman Professor in Molecular Biology. Tank was among the scientists present at the White House when the initiative was announced, and will participate as a member of the steering committee that has been appointed to lay out the scientific strategy for the project.

"The president's exciting challenge strongly resonates with Princeton's intellectual strengths and world-class facilities in the Princeton Neuroscience Institute," said A.J. Stewart Smith, dean for research and the Class of 1909 Professor of Physics. "The BRAIN Initiative is ideally matched to the interests and expertise of a broad range of outstanding faculty members working to understand the fundamental processes involved in brain function and their relationships."

"I am very excited to be part of this national effort to revolutionize the exploration of the brain," Tank said. "The BRAIN Initiative's focus on neurotechnologies for recording and analyzing brain activity dovetails with many of the research projects now in place at the Princeton Neuroscience Institute."

The BRAIN advisory council on which Tank will serve has been called a "dream team" by Francis Collins, director of the National Institutes of Health (NIH). The plan calls for the BRAIN Initiative to be funded by the NIH, the National Science Foundation, the Defense Advanced Research Projects Agency, and private-sector research institutions and foundations. The proposed budget request that the president recently submitted to the Congress seeks $100 million for the first year of the project. Progress in understanding how neural circuits operate in the brain will require the development of new technologies as well as improving existing methods, Tank said.

Researchers at PNI are developing several such technologies, including molecular probes that light up in response to brain cell activity, techniques for studying the architecture of connections between brain cells in model organisms such as worms and rodents, and improvements in methods for interpreting data from functional brain scans in humans.

"Together with the new technologies that will be developed, research at Princeton will enable profound new discoveries about how neurons work together to create a functioning brain," Tank said. "The challenges are enormous, but developments are happening very fast, and the pace is accelerating. There has never been a more exciting time in neuroscience."