Watch a video of neurons in the brain expressing a calcium-sensitive fluorescent protein.

Imagine an exceedingly complex circuit board. Wires often split -- seemingly at random -- and connect in strange and unexpected ways.

This is how Princeton University researchers developing a new method for studying brain connectivity see the brain.

Because of its intricate organization, figuring out the wiring diagram that explains how the billions of neurons in the brain are connected, and determining how they work together, remains a formidable task. But success in this endeavor could transform the field of neuroscience, offering a map toward increased knowledge of how the brain works, with implications for learning more about conditions ranging from depression and schizophrenia to Alzheimer's and Parkinson's disease.

Funded by a $993,000 National Institutes of Health Challenge Grant through the American Recovery and Reinvestment Act, Lynn Enquist, a professor in Princeton's Department of Molecular Biology and in the Princeton Neuroscience Institute, is leading an effort to use genetically engineered viruses as explorers that travel throughout the nervous system, tracing the connections between neurons and reporting on their activity along the way.

"Over the years, the understanding of how cells in the brain are connected has been a major problem," said Enquist, Princeton's Henry L. Hillman Professor in Molecular Biology. "How can this blob of tissue do everything? We're missing a lot of information about how the brain works." 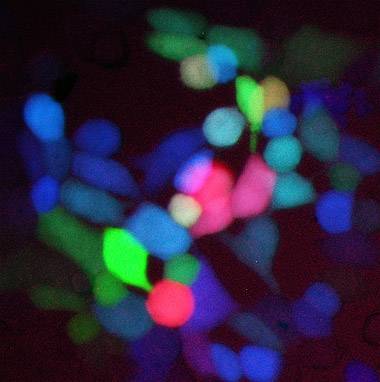 Cells glow brightly 18 hours after being infected with a genetically engineered virus that directs them to produce colorful fluorescent proteins. Princeton researchers hope this virus will have capabilities that exceed those of conventional viral tracers being used today, allowing them not only to map out entire neural circuits, but to distinguish among different sections within a given circuit. (Image: Oren Kobiler)

The NIH-funded project hinges on the creation and use of a genetically engineered virus that causes neurons to produce colorful fluorescent proteins. As the virus spreads, it leaves a colorful path through the brain in its wake. Some of the engineered viruses are designed to make the neurons glow brightly when they are active, like an "On Air" sign in the brain.

"These DNA-based technologies allow us to put little labels on neurons that tell who they are connected to," said team member Samuel Wang, an associate professor in the Department of Molecular Biology and in the Princeton Neuroscience Institute. "It's as if you could immediately tell on Facebook the difference between 'friends' and 'friends of friends.' And when we add proteins that get brighter when neurons are active, now our little labels tell us not only where a neuron is, but what it is doing. Combined with microscopy, it's like seeing all your Facebook friends' status updates at once, in real time -- basically watching the whole conversation at once."

Chemicals exist that can be used to trace brain connectivity, including certain molecules from the horseradish plant and the cholera toxin, but they become increasingly dilute as they spread throughout the brain, just as a drop of food coloring disperses in a cup of water. Other chemicals can change brightness or color when a neuron is active, but they label all cells indiscriminately, leading to a murky image. Because viruses replicate, they are self-amplifying and do not become less concentrated as they move away from their entry point into the brain, making them a promising tool for researchers seeking to probe the hidden depths of the brain. Viruses also can target subsets of neurons, making them glow -- and therefore stand out -- in sharp relief. Enquist and his collaborators presently are conducting laboratory experiments in test tubes and mice as they seek to increase fundamental knowledge about neural connectivity, which has significant implications for understanding the human brain.

Watch a video of pseudorabies virus particles moving in neurons growing in a tissue culture dish.

The Princeton-led team's virus of choice is pseudorabies virus (PRV), which normally infects pigs but can also attack a variety of other organisms, including chickens and rodents. PRV does not infect people, but it is a member of the alpha herpes virus family, which includes the viruses that cause chicken pox and cold sores in humans.

To make the virus capable of coloring brain cells as it infects them, team member Oren Kobiler, a postdoctoral research fellow in Enquist's lab, is incorporating into its genetic material a cell-marking technique known as Brainbow. The technology was developed at Harvard University by a research team led by Jean Livet, Joshua Sanes and Jeff Lichtman, and first reported in a 2007 issue of the journal Nature. Brainbow works by inserting into neurons three genes that direct the production of blue, green and red fluorescent proteins. There are some 90 possible hues that can be made from different combinations of the blue, green and red proteins, and the color of a given neuron is determined by the specific amount of each color being made by the cell.

The Brainbow technique also incorporates into neurons a genetic mechanism that randomly mixes and matches the genes that direct the production of the blue, green and red proteins. This shuffling system is activated by the presence of a protein called CRE, which causes neurons that produce CRE to turn different colors from other neurons around them.

By inserting Brainbow into a virus, the research team is hoping to design a viral tracer with capabilities that exceed conventional viral tracers being used today, he explained. Current tracers are able to map out entire circuits, but they cannot distinguish among different sections within a given circuit.

Enquist and his collaborators are using genetic engineering techniques to direct certain neurons, such as those that control a particular body function, to produce CRE. When the neurons that have been engineered to make CRE are infected by the new viral tracer, they will be different colors from infected neurons that are not making CRE. This will allow the researchers to see different subcircuits in the brain, Enquist explained.

For example, he is working with J. Patrick Card, a neuroscientist at the University of Pittsburgh, to make neurons in the brainstem involved in blood pressure regulation in mice produce CRE. When the mice are then infected with the Brainbow virus, the neural circuits that control blood pressure should be different colors from the rest of the circuits in the brain, he said.

"For a minute, think of the brain like a car battery," Enquist said. "The Brainbow virus will let us label all of the wires in the car that connect to the battery, but to label those that connect to the radio in a different color from the rest of the circuit."

In addition to the Brainbow technology, the research team is adding genetic instructions to the virus that tell cells to produce a special fluorescent protein that gets brighter in the presence of calcium, the levels of which rise inside neurons when they are sending signals. This technology, which is being refined in Wang's lab, will allow the researchers to mark neural circuits and watch them work, according to Enquist.

"To continue the analogy, our viral tracer should not only label the wires to the radio in a different color, but also cause them to glow as power travels through them," he said.

Beyond using the Brainbow virus to study the structure and function of neural circuits in living mice, the researchers intend to investigate simple neural circuits built in the lab to understand how they function in a less complicated environment. Jason Puchalla, a faculty member in Princeton's physics department, is fabricating microfluidic devices on which the researchers will grow neurons and explore how they function. This will provide opportunities for the scientists to learn more about how alpha herpes viruses spread, which has implications for treatment of these infectious diseases. At the same time, increasing the fundamental understanding of how neurons connect to one another may generate new insights into neurological disorders, which can arise when normal neural circuitry is disturbed.

"The Brainbow project is characteristic of Lynn Enquist's ability to see beyond the horizon and generate an experimental plan that merges, and advances, scientific disciplines, in this case virology and neuroscience," Card said. "Successful completion of the experiments funded through this grant will represent a huge advance in the power of technology. The collaborative studies with Sam Wang are particularly important in that they not only define the synaptic organization of neural circuits but also promise to provide insights into the functional activity of the circuit under study. The novel insights into brain organization and function that are likely to emerge from those investigations cannot be overestimated."