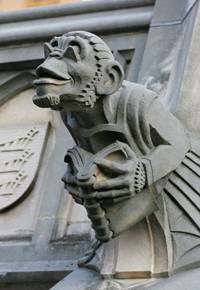 The "literate ape," one of four figures above Dillon Gymnasium, is among the many gargoyles found around the Princeton campus. (Photo: John Jameson) 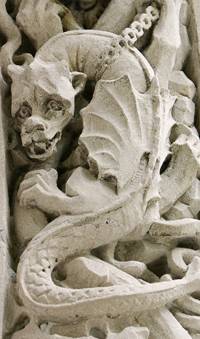 The “Chained Dragon” gargoyle is among the beautifully detailed carvings surrounding the doorways of the University Chapel. This decorative beast is based on the French legend of La Gargouille, a dragon that terrorized the town of Rouen before being subdued by St. Romanus. (Photo: Denise Applewhite)

Princeton's gargoyles, the small grotesque animal or human figures carved in stone, can be found at dozens of locations on everything from downspouts to arches.

"The Gargoyles of Princeton University: A Grotesque Tour of the Campus," a book produced by the Office of Communications, provides a glimpse and description of many of those figures.

For more information on Princeton's gargoyles, visit the online version of the publication.