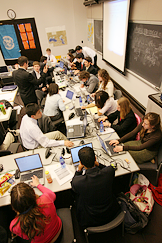 Room 309 in the Frist Campus Center served as the "crisis room" for a session of the Princeton Interactive Crisis Simulation, a high-tech version of a Model United Nations conference run by Princeton students. From the crisis room, Princeton student liaisons communicated with delegates from other institutions situated in 11 rooms around Frist.

At left: Senior Sashank Rishyasringa, one of the founders of the Princeton conference, served as this year's "mastermind," leading the efforts to devise various crisis scenarios around the Middle East.

Each time the door to room 309 opened, the late-afternoon quiet of the Frist Campus Center was shattered by the din of 30 Princeton students engulfed by crises in the Middle East.

The Princeton Interactive Crisis Simulation (PICSim), a high-tech, student-run version of a Model United Nations conference, was in mid-session on Friday, March 3. Frist 309 was the "crisis room," where the Princeton students huddled around laptop computers to communicate with committees of delegates situated in 11 rooms around the building, representing various Middle Eastern nations and the United States.

The numerous crises at play included the bombing of a cruise ship in the Suez Canal, an assassination attempt on Pakistan's president, a threat by Iran to move its nuclear facilities and negotiations over oil transport routes through Afghanistan. Like traders on the floor of a stock exchange, the student "masterminds" concocting the various scenarios barked out additional details to be communicated to the delegates:

In response, a row of crisis communications liaisons on one side of the room sent updates to their delegates and awaited action orders. Across the room, other students developed government intelligence reports that were transmitted to each committee. A news team in the back of the room created stories for "Global News Report," an online newscast shown on projection screens in each of the committee rooms around Frist.

In total, more than 240 students -- including roughly 80 from Princeton -- participated in the March 2-5 conference, which was organized by the student-run International Relations Council. Other participants came from 14 colleges and universities in the United States, Canada and Germany.

According to conference organizers, the Princeton event is unique among Model U.N. programs because of the student-designed software that enables the far-flung groups of participants to communicate with each other in real-time to analyze and solve problems.

Taking a quick break from the action, sophomore Kayvon Tehranian, the conference's chief of staff, pointed to sophomore Emily Norris, liaison to the Iranian delegation, working on her laptop. "She's communicating with our Iranian chair," he said. "In that committee, they have the defense minister, foreign minister, interior minister, oil minister -- all the cabinet members. They deliberate on the issues, communicate with the Princeton student running that committee, and it's relayed to us. It's a very elaborate communication channel."

Now in its third year, the interactive simulation was developed by students who had participated in Model U.N. conferences and felt "constrained" by their more traditional format, according to chair Luke Goodwin, a sophomore.

"The options available to committees at PICSim include the whole spectrum of economic, social, political, diplomatic and military policy choices," Goodwin said. "Also addressed is the influence of non-state actors such as rebel groups, NGOs [nongovernmental organizations], terrorists, private economic interests and the news media in international politics."

Personifying many of the characters involved in the scenarios was sophomore Michael van Landingham, who shuttled in and out of Frist 309 in a variety of costumes. He and junior Will Wachter, the conference's media director, produced numerous videos and other communications to provide delegates with updates on hostage situations and other escalating incidents around the Middle East.

"We have done news reports and terrorist intelligence meetings," he said. "I also have done voice clips and live chats with some of the committees as characters who have intelligence information."

Following news of terrorists seizing a cruise ship in the Suez Canal, freshman Jessica Frey tried to sort out the details in her role as crisis communications liaison for Egypt.

"The Americans were trying to help Egypt get it out of the canal. They tried to send in the Marines to take over the ship and get the hostages out, but unfortunately the whole ship was wired with explosives and blown up," she said. Reviewing messages from her committee members, Frey noted, "There was some discrepancy in what the news said, and now they're trying to figure out what the U.S. said."

As the "Global News Report" team to her left rushed to post another breaking news update, Frey said of the conference, "It's really fun, but it can be kind of frustrating at times. I guess this gives you an idea of how crazy making decisions in a split second can be."

Tehranian, the chief of staff, and senior Sashank Rishyasringa, a conference co-founder and this year's lead "mastermind," noted in a summary written for conference participants that "several delegates felt overwhelmed at the pace of events in the Middle East, and especially, the ability for situations to escalate and spin out of control."

"They did, however, with confidence and clarity articulate clear policy directives at each of these junctures; most importantly, they demonstrated a knowledge of existing Middle Eastern geopolitics and political relations that both enabled to them to achieve a very precise level of decision-making [and] set up head-on collisions between several of the countries in the simulation," the organizers wrote.

Hitz: World must act together to fight terrorism