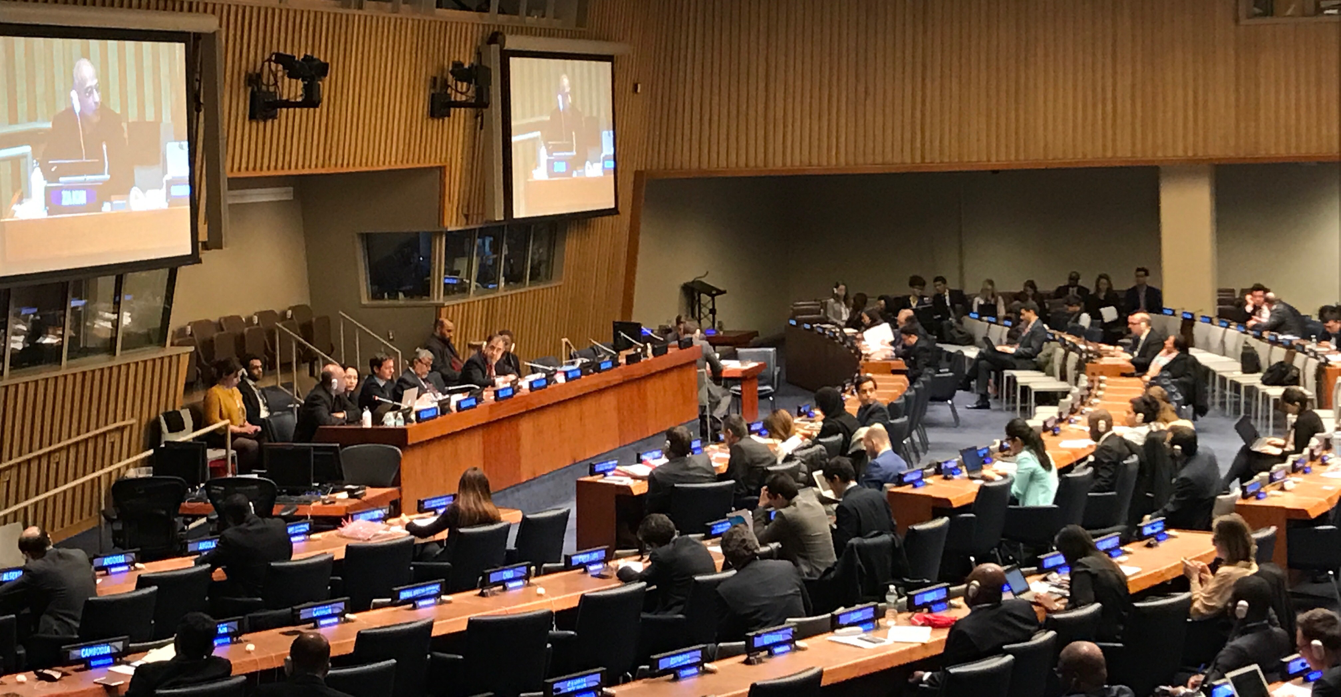 Researchers at Princeton’s Program on Science and Global Security attend and address the 124-nation United Nations Conference to Prohibit Nuclear Weapons in 2017.

Three Princeton University researchers are connected to this year’s winner of the 2017 Nobel Peace Prize: the International Campaign to Abolish Nuclear Weapons (ICAN).

ICAN is a coalition of nongovernmental groups from 100 countries working on a treaty to eradicate nuclear weapons.

Alexander Glaser is an associate professor of mechanical and aerospace engineering and international affairs as well co-director of the Program in Science and Global Security (SGS), based at the Woodrow Wilson School of Public and International Affairs. He works on issues related to nuclear nonproliferation, nuclear fuel cycles, nuclear energy and nuclear forensics.

Tamara Patton is a doctoral student at the Program in Science, Technology and Environmental Policy (STEP), based at the Wilson School. Her research centers on verification options for future nuclear arms control and disarmament measures, including working with virtual reality environments to design and simulate possible systems for verifying warhead and fissile material reductions.

Zia Mian is a physicist and SGS co-director, whose research and teaching focuses on nuclear weapons and nuclear energy policy, especially in Pakistan and India.

They answered questions about ICAN receiving the Nobel Peace Prize and their involvement with the group.

ICAN won the 2017 Nobel Peace Prize for 'its work to draw attention to the catastrophic humanitarian consequences of any use of nuclear weapons and for its ground-breaking efforts to achieve a treaty-based prohibition.' Why is this so important today?

This award is enormously significant. It provides recognition of the fundamental importance and effectiveness of citizens from around the world taking responsibility and working together to drive progress on issues that confront communities, countries and the world as a whole when governments and business-as-usual politics have fallen short. ICAN winning the Nobel Peace Prize offers hope, in particular, that humanity can reduce and finally end the danger posed by the existence of nuclear weapons.

ICAN was founded 10 years ago in Australia. In 2017, the years of creative campaigning by ICAN and its partner organizations from around the world, supported by sympathetic governments, the Red Cross, and by scientific, legal, and medical experts on nuclear weapons, led to 122 countries negotiating and adopting the United Nations Treaty on the Prohibition of Nuclear Weapons. This is a historic achievement and marks a potential turning point, the beginning of the end of the nuclear weapons age.

Convincing the public and decision-makers in these countries to make serious efforts to eliminate these weapons, as most of them are already committed to as members of the Nuclear Non-Proliferation Treaty, will be a long struggle. Until these weapons are taken out from the war plans, retired and dismantled, there will remain the risk of use of nuclear weapons.

The current crisis over North Korea shows the risk of escalation and possibility of use, perhaps more than any other crisis since the 1962 Cuban Missile Crisis. The Nobel Peace Prize will help strengthen grassroots efforts around the world against nuclear weapons in the years ahead. 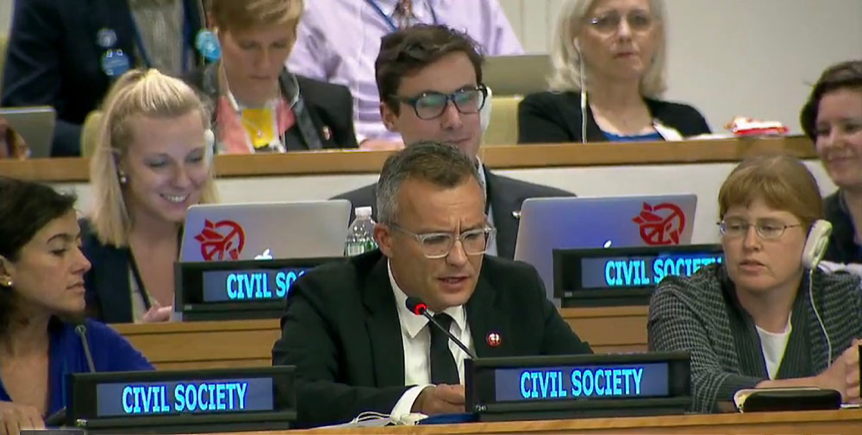 Alexander Glaser, who co-directs the Program on Science and Global Security with Zia Mian, speaks at the U.N. Conference to Prohibit Nuclear Weapons in 2017.

As researchers involved with nuclear disarmament and nonproliferation efforts, what does it mean to you to see ICAN win the Nobel Peace Prize?

ICAN is the latest in a long history of civil society groups, social movements, and political campaigns to take up the fight for nuclear disarmament. It is encouraging to see a new generation of activists take up this struggle and bring new ideas and new energy. Humanity has struggled with nuclear weapons for more than 70 years, and sometimes it can seem overwhelming.

Right now the United States is considering spending $1.5 trillion dollars over the next 30 years to modernize and upgrade all its nuclear weapon systems, and the eight other nuclear weapon states are either modernizing or building up their arsenals. Meanwhile, President Trump is threatening to “destroy North Korea,” which, for its part, has been testing nuclear weapons and making its own nuclear threats. At the same time, the hard-won nuclear deal with Iran to limit its nuclear activities is under threat. The recognition for ICAN and for the Treaty on the Prohibition of Nuclear Weapons offers a clear and compelling alternative and shows another path forward.

It is worth remembering the need for a ban on nuclear weapons was the subject of the first-ever United Nations resolution, passed in January 1946. But governments have always been reluctant to act on this. The need for private citizens to lead the way was recognized from the beginning and has a history in the town of Princeton and at the University. The Emergency Committee of Atomic Scientists, founded in 1946, based in an office across the street from Princeton University and led by Albert Einstein, declared that when it came to nuclear weapons “there is no possibility of control except through the aroused understanding and insistence of the peoples of the world … we believe that an informed citizenry will act for life and not death.” They have been proven right. There are reasons for hope.

How were you involved with ICAN and the negotiations of the nuclear weapon ban treaty?

Faculty, researchers and students at the SGS have been actively involved in nuclear disarmament issues for many years, and recently have been working with the efforts organized by ICAN and around the nuclear weapon ban treaty.

As the Nobel Peace Prize award citation noted, ICAN played a key role in leading civil society efforts to achieve the ban treaty. As part of this, we provided expert advice to ICAN, other NGOs, and to negotiators on technical issues related to the verified and irreversible elimination of nuclear weapon programs, which form a core obligation of the ban treaty.

Along with offering analysis and recommendations in advance on verification options for possible ban treaty and contributing a working paper for the 124-country United Nations conference that was set up to negotiate the new treaty, we were invited to present to the negotiating conference and civil society observers. We discussed such issues as the verification of the treaty, establishing a scientific advisory mechanism, and protecting the rights and safety of individuals who report violations.

Mian also analyzed the implications of the treaty for international nuclear politics.

Glaser, Patton and Mian are working on explaining the dangers of nuclear weapons and the importance of the ban treaty as part of the exhibition “Shadows and Ashes: The Perils of Nuclear Weapons,” which will be on display from Nov. 6 to Dec. 7, at the Woodrow Wilson School’s Bernstein Gallery.