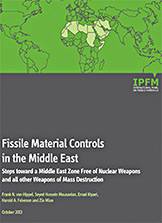 The recent multination nuclear agreement with Iran could serve as a first step toward a Middle East free of nuclear weapons and other weapons of mass destruction, and a recent report from the Princeton-based International Panel on Fissile Materials outlined the other actions that would be required to reach that goal.

The recent multination nuclear agreement with Iran could serve as a first step toward a Middle East free of nuclear weapons and other weapons of mass destruction, according to researchers on the International Panel on Fissile Materials (IPFM). The group, based at Princeton University and made up of nuclear experts from 18 countries, outlined the other actions that would be required to reach that goal in a recent report.

All states in the region — including Iran — would have to agree to steps that permanently reduce the risk of civilian nuclear facilities being used as a cover for secret nuclear-weapons programs, the researchers wrote in a report titled "Fissile Material Controls in the Middle East" (.pdf). Under such a zone, Israel — the only regional state with nuclear weapons — would have to stop producing plutonium and highly enriched uranium, the key materials for nuclear weapons. Israel would also have to declare and begin to reduce its current stockpiles, eventually eliminating them.

"Together, these measures would bring about a nuclear weapon-free Middle East and would make that zone more robust when in force," said Frank von Hippel, a founder of Princeton's Program on Science and Global Security, co-chair of IPFM and professor emeritus of public and international affairs at the Woodrow Wilson School of Public and International Affairs.

The United States, Russia and Britain agreed in 2010 to sponsor an international conference to lay the groundwork for a Middle East free of nuclear weapons and other weapons of mass destruction. In late October 2013, a preparatory meeting was held in in Switzerland that brought together diplomats from Iran, Israel, the Arab states and the United States.

IPFM estimates that Israel has produced enough plutonium to make on the order of 200 nuclear warheads, assuming each weapon would need four to five kilograms. A nuclear arsenal of this size would be the fifth largest in the world — larger than Britain's, almost the same size as China's and about two-thirds as large as France's. It is believed that Israel's plutonium is produced in a reactor housed at the Negev Nuclear Research Center near Dimona, and that an underground reprocessing plant adjoining the reactor is used to separate the plutonium from the spent nuclear reactor fuel, the report notes.

"By shutting down the Dimona reactor and reprocessing plant, Israel would cap the amount of plutonium that it could use to make nuclear weapons," said Zia Mian, a research scientist with the Program on Science and Global Security. "This could be verified remotely by Israel's neighbors and would be the first step toward regional monitoring by prospective parties of a 'Middle East Weapons of Mass Destruction-Free Zone.'"

To reduce the risk of secret nuclear-weapons programs, the report recommends that all states in the region – especially Iran, the only country in the region with civilian uranium enrichment plants and an operating nuclear power reactor — commit to:

"If such measures could be adopted globally, it would significantly strengthen the global nonproliferation regime and the foundation for a nuclear weapon-free world," said Harold Feiveson, who helped draft the NPT treaty and is a co-founder of the Program on Science and Global Security and a lecturer in public and international affairs at the Wilson School.

Several of the above measures were part of the recent November 2013 nuclear deal between Iran and a group of six world powers (the United States, Britain, China, France, Germany and Russia). Iran agreed that, for at least six months, it would not separate plutonium nor would it build a facility capable of doing so. Iran also agreed that it would not enrich uranium above the 5 percent level used for power reactors, and that it would reduce its stockpile of already enriched uranium. These measures, the report notes, would serve as significant barriers to any Iranian effort using civilian facilities to quickly and secretly produce materials for nuclear weapons.

Although the report does not specifically discuss chemical and biological weapons, the researchers stressed the importance of all countries in the region complying with the Chemical Weapons Convention (CWC) and the Biological Weapons Convention. This has become particularly important in light of chemical weapons use in Syria in 2013, and the country's subsequent decision to agree to the CWC, declare its stockpile and destroy its weapons. The researchers said that Egypt and Israel, now the only countries in the region that have not joined the CWC, should follow suit.

To verify that all countries are complying with their commitments, the IPFM report suggests Middle East states consider a regional organization that could supplement the inspection activities of the International Atomic Energy Agency and the Organization for the Prohibition of Chemical Weapons, which work respectively to assure that countries are upholding the nuclear weapons and the chemical weapons agreements.

"Such an organization would provide all countries of the region an additional basis for confidence that all their neighbors are complying with the obligations they will undertake by joining a zone free of nuclear weapons and weapons of mass destruction," said Seyed Hossein Mousavian, who has been with the Program on Science and Global Security since 2010. He formerly served as a member of staff to Iran's Supreme National Security Council and as Iran's ambassador to Germany.

This is the 11th Middle East research report IPFM has issued, and it has also released its seventh annual Global Fissile Material Report detailing stocks of nuclear weapons materials held by countries around the world. Both reports were issued in October. The Middle East report has been presented at briefings at the United Nations in New York City; Doha, Qatar; Tel Aviv and Jerusalem, Israel; and Amman, Jordan.