Scientists at Princeton University and the U.S. Department of Energy's (DOE) Princeton Plasma Physics Laboratory (PPPL) are developing a unique process to verify that nuclear weapons to be dismantled or removed from deployment contain true warheads. The system would do so without measuring classified information that could lead to nuclear proliferation if the data were to be leaked.

The novel verification process draws upon principles used in cryptography, the science of disguising information. Researchers said the project could help support nuclear arms talks and ensure that weapons of mass destruction are truly removed from circulation.

"The goal is to prove with as high confidence as required that an object is a true nuclear warhead while learning nothing about the materials and design of the warhead itself," said physicist Robert Goldston, a co-principal investigator for the project and professor of astrophysical sciences at Princeton. He is a fusion researcher and former director of PPPL. 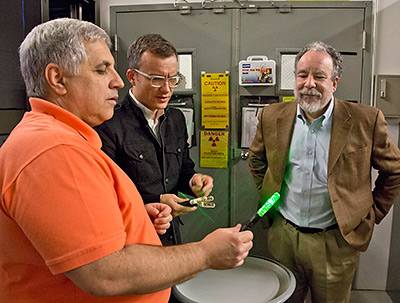 Goldston and Princeton physicist Alexander Glaser, working with PPPL engineer Charles Gentile, have begun building an experimental system at PPPL to probe a DOE-approved, unclassified, and steel-encased test object containing non-nuclear materials. The project would mimic the procedure for inspecting warheads. They hope to complete the first full phase of experiments by the end of the year.

Glaser and Goldston both are associated with Princeton's Program in Science and Global Security.

The idea behind the warhead verification system is surprisingly simple. It calls for comparing a nuclear warhead that is presented for inspection with a presumed identical one — sometimes called a "golden warhead" — that is known to be real and armed with fissile, or explosive, nuclear material.

"You just need to know that one warhead is good, and if you can verify that one you can verify others," said Glaser, an assistant professor of mechanical and aerospace engineering and international affairs in Princeton's Woodrow Wilson School of Public and International Affairs.

Such a "zero-knowledge protocol" for verifying warheads could create a new tool for global arms control efforts. While the total number of nuclear weapons in the United States and Russian arsenals has shrunk from more than 60,000 reported deployed and nondeployed warheads during the Cold War to some 16,000 reported today, this has been achieved without verification of the actual contents of the warheads. Arms inspectors have instead counted the reduction of nuclear weapon delivery systems, such as submarines and missile silos, without requiring or verifying the dismantlement of the warheads themselves.

The PPPL project aims to show that the zero-knowledge verification process can work.

"We know it is doable in theory, but will a hardware implementation used under real-world conditions be sensitive enough to detect meaningful differences and violations?" said Glaser, who thought up the system with Goldston and computer scientist Boaz Barak, a former Princeton associate professor of computer science and now a senior researcher at Microsoft Research New England.

The project is funded by grants of $100,000 from the U.S. State Department and $162,500 from Global Zero, a nonprofit organization dedicated to eliminating all nuclear weapons.

Glaser views this zero-knowledge protocol as an incentive to support and facilitate future nuclear arms talks.

"I think it will be important to have this on the table when people think about an inspection system," Glaser said. "Many will say that it's impossible to verify nuclear warheads without running the risk of leaking classified information and so contributing to nuclear proliferation. It would be a powerful argument to show that in principle, and even in real experiments, you can build a system that never measures any properties of objects but still verifies that they are identical to one another, and can achieve this to whatever level of accuracy is required."