The National Nuclear Security Administration (NNSA) has named Princeton University and the U.S. Department of Energy's (DOE) Princeton Plasma Physics Laboratory (PPPL) as participants in a new $25 million, five-year project to address technology and policy issues related to nuclear arms control. The project will include a unique process that Princeton and PPPL are developing to verify that nuclear weapons to be dismantled or removed from deployment contain true warheads.

Princeton and PPPL will join a consortium of 13 universities and eight national laboratories in the project, called the Center for Verification Technology and led by the University of Michigan. Funding from NNSA, a semi-autonomous branch of the DOE, will include a combined total of $3.5 million over five years for Princeton and PPPL for their research on verification. This research was first launched in 2011 with a seed grant from The Simons Foundation of Vancouver, Canada, that came to the University through Global Zero, a nonprofit organization dedicated to eliminating all nuclear weapons.

"This is an excellent example of collaboration between Princeton and PPPL on scientific issues of great public interest," said A.J. Stewart Smith, the University's vice president for PPPL. "This research benefits from the close integration of the main campus and PPPL." 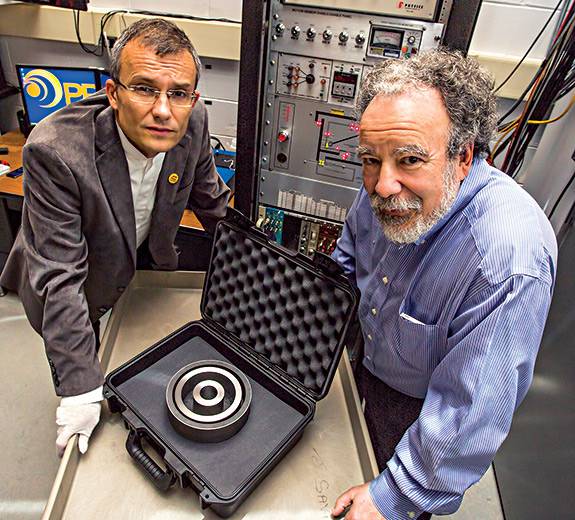 Physicists Alexander Glaser, left, and Robert Goldston display the non-nuclear test object that will serve as a target in their research. (Photo by Elle Starkman, Princeton Plasma Physics Laboratory)

As part of this project, Princeton and PPPL are developing a "zero-knowledge protocol for nuclear warhead verification" — a system to confirm that a putative warhead actually is one without measuring classified information that could lead to nuclear proliferation if the data were to be leaked. The research fires high-energy neutrons at a test object containing non-nuclear materials. This target, called a British Test Object, will be used to test the validity of the novel approach to verification.

"The goal is to prove with as high confidence as required that an inspected item is a true nuclear warhead while learning nothing about the materials and design of the warhead itself," said Robert Goldston, a professor of astrophysical sciences at Princeton and a fusion researcher and former director of PPPL. He is developing the zero-knowledge protocol with Alexander Glaser, an assistant professor of mechanical and aerospace engineering and international affairs in the Woodrow Wilson School of Public and International Affairs. Both physicists are associated with the Princeton Program in Science and Global Security.

Princeton also leads a key research thrust of the consortium called "Treaty Verification: Characterizing Existing Gaps and Emerging Challenges" that is part of the NNSA project.

"Our work in this area is meant to inform and guide the technical research that all the other groups are doing," said Glaser. "So we are in an excellent position to help make the overall project a great success. It is an exciting opportunity to be part of this effort."

PPPL is managed by Princeton University for the U.S. Department of Energy's Office of Science, which is the largest supporter of basic research in the physical sciences in the United States.