A system that can compare physical objects while potentially protecting sensitive information about the objects themselves has been demonstrated experimentally at the U.S. Department of Energy's (DOE) Princeton Plasma Physics Laboratory (PPPL). This work, by researchers at Princeton University and PPPL, marks an initial confirmation of the application of a powerful cryptographic technique in the physical world.

"This is the first experimental demonstration of a physical zero-knowledge proof," said Sébastien Philippe, a graduate student in mechanical and aerospace engineering at Princeton and lead author of the paper. "We have translated a major method of modern cryptography devised originally for computational tasks into use for a physical system." Cryptography is the science of disguising information. 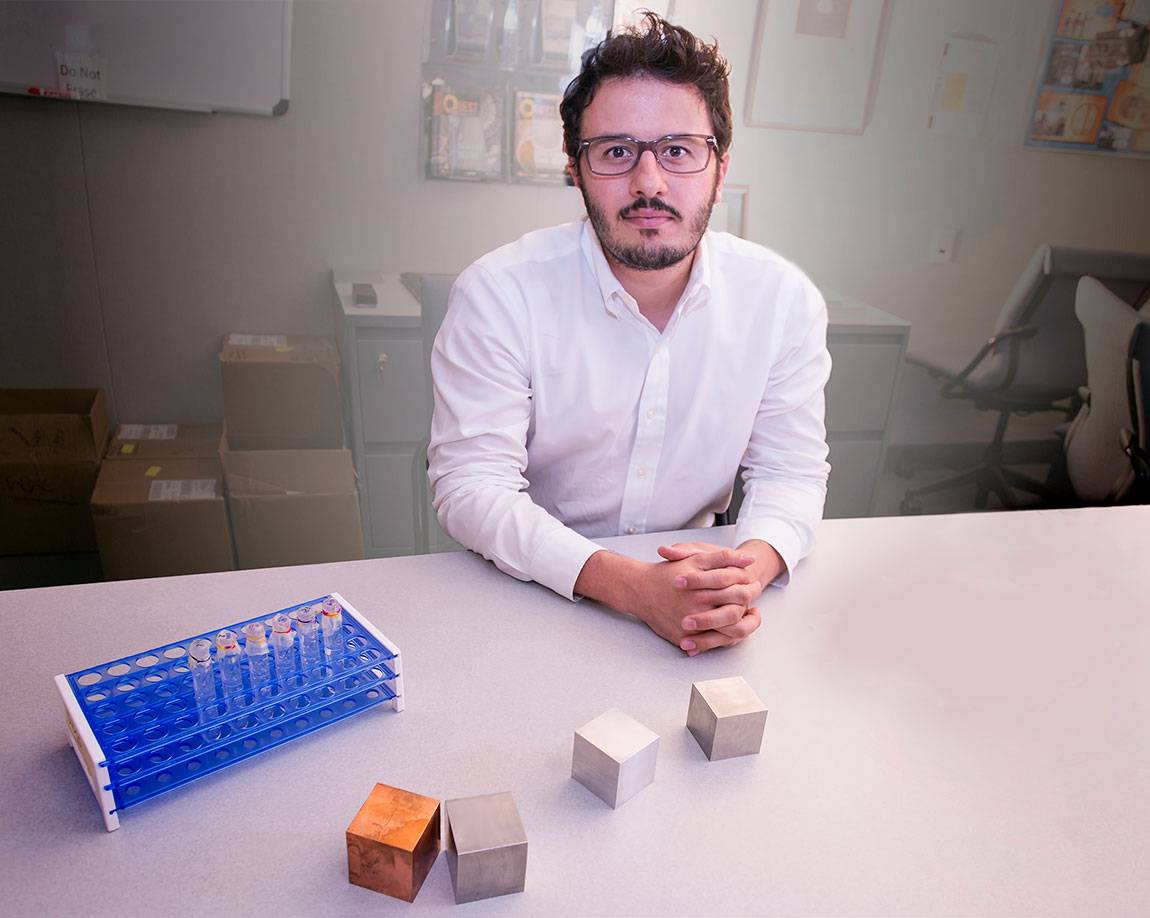 This research, supported by funding from the DOE's National Nuclear Security Administration through the Consortium for Verification Technology, marks a promising first experimental step toward a technique that could prove useful in future disarmament agreements, pending the results of further development, testing and evaluation. While important questions remain, the technique, first proposed in a paper published in 2014 in Nature magazine, might have potential application to verify that nuclear warheads presented for disarmament were in fact true warheads. Support for this work came also from the John D. and Catherine T. MacArthur Foundation and the Carnegie Foundation of New York.

The research, outlined in a paper in Nature Communications on Sept. 20, was conducted on a set of 2-inch steel and aluminum cubes arranged in different combinations. Researchers first organized the cubes into a designated "true" pattern and then into a number of "false" ones. Next, they beamed high-energy neutrons into each arrangement and recorded how many passed through to bubble neutron detectors produced by Yale University on the other side. When a neutron interacts with a superheated droplet in the detector, it creates a stable macroscopic bubble.

To avoid revealing information about the composition and configuration of the cubes, bubbles created in this manner were added to those preloaded into the detectors. The preload was designed so that if a valid object were presented, the sum of the preload and the signal detected with the object present would equal the count produced by firing neutrons directly into the detectors — with no object in front of them.

The experiment found that the count for the "true" pattern equaled the sum of the preload and the object when neutrons were beamed with nothing in front of them, while the count for the significantly different "false" arrangements clearly did not. 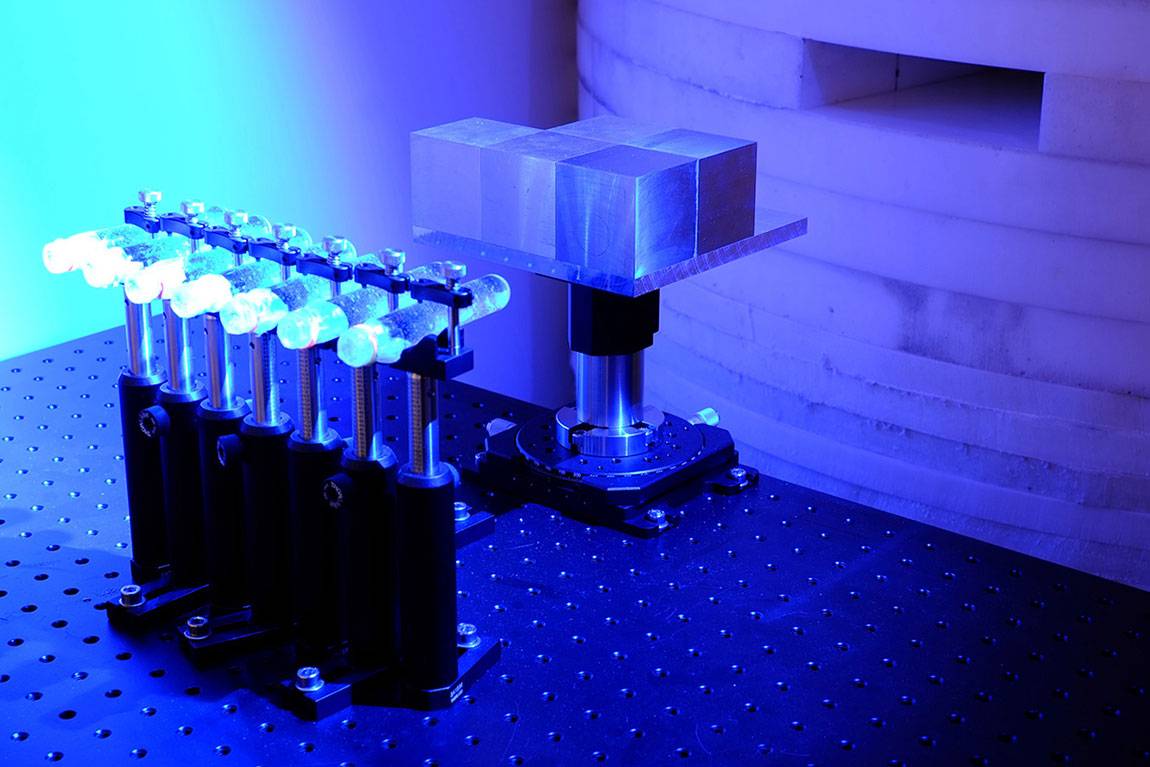 Setup of Sébastien Philippe’s experiment in a PPPL laboratory. Neutrons beamed from the device at right passed through the arrangement of cubes and were recorded in the bubble detectors at left.

"This was an extremely important experimental demonstration," said Robert Goldston, a fusion scientist and co-author of the paper who is former director of PPPL and a Princeton professor of astrophysical sciences. "We had a theoretical idea and have now provided a proven practical example." Joining him as co-authors are Alex Glaser, associate professor of mechanical and aerospace engineering and international affairs in Princeton's Woodrow Wilson School of Public and International Affairs; and Francesco d’Errico, senior research scientist at the Yale School of Medicine and professor at the University of Pisa, Italy.

When further developed for a possible arms control application, the technique would add bubbles from irradiation of a putative warhead to those already preloaded into detectors by the warhead's owner.

If the total for the new and preloaded bubbles equaled the count produced by beaming neutrons into the detectors with nothing in front of them, the putative weapon would be verified to be a true one. But if the total count for the preload plus warhead irradiation did not match the no-object count, the inspected weapon would be exposed as a spoof. Prior to the test, the inspector would randomly select which preloaded detectors to use with which putative warhead, and which preload to use with a warhead that was, for example, selected from the owner's active inventory.

In a sensitive measurement, such as one involving a real nuclear warhead, the proposition is that no classified data would be exposed or shared in the process, and no electronic components that might be vulnerable to tampering or snooping would be used. Even statistical noise — or random variation in neutron measurement — would convey no data. Indeed, "For the zero-knowledge property to be conserved, neither the signal nor the noise may carry information," the authors write. A necessary future step is to assess this proposition fully, and to develop and review a concept of operations in detail to determine actual viability and information sensitivity.

Important questions yet to be resolved include the details of obtaining and confirming a target warhead during the zero-knowledge measurement; specifics of establishing and maintaining the pre-loaded detectors in a way that ensures inspecting party confidence without revealing any data considered sensitive by the inspected party; and feasibility questions associated with safely deploying active interrogation measurement techniques on actual nuclear warheads in sensitive physical environments, in a way that provides confidence to both the inspected and inspecting parties.

Glaser, Goldston and Boaz Barak, a professor of computer science at Harvard University and former Princeton associate professor, first launched the concept for a zero-knowledge protocol for warhead verification in the 2014 paper in Nature magazine. That paper led Foreign Policy magazine to name the authors among its "100 Leading Global Thinkers of 2014," and prompted other research centers to embark on similar projects. "We are happy to see this important field of research gain new momentum and create new opportunities for collaboration between national laboratories and universities," Glaser said.

Seed money for the original work came to Princeton from The Simons Foundation of Vancouver, Canada, through a nonprofit called Global Zero, and from the U.S. Department of State Verification Assets Fund.

PPPL, on Princeton University's Forrestal Campus in Plainsboro, New Jersey, is devoted to creating new knowledge about the physics of plasmas — ultra-hot, charged gases — and to developing practical solutions for the creation of fusion energy. Results of PPPL research have ranged from a portable nuclear materials detector for anti-terrorist use to universally employed computer codes for analyzing and predicting the outcome of fusion experiments. The laboratory is managed by Princeton University for the U.S. Department of Energy's Office of Science, which is the largest single supporter of basic research in the physical sciences in the United States, and is working to address some of the most pressing challenges of our time.

Established by Congress in 2000, NNSA is a semi-autonomous agency within the U.S. Department of Energy responsible for enhancing national security through the military application of nuclear science. NNSA maintains and enhances the safety, security, and effectiveness of the U.S. nuclear weapons stockpile without nuclear explosive testing; works to reduce global danger from weapons of mass destruction; provides the U.S. Navy with safe and effective nuclear propulsion; and responds to nuclear and radiological emergencies in the U.S. and abroad.