Big Bang neutrinos are believed to be everywhere in the universe but have never been seen. As the oldest known witnesses or relics of the early universe, these subatomic particles could shed new light on the birth of the cosmos if scientists could pin them down. That's a tall order since these ghostly particles can speed through planets as if they were empty space.

Princeton University physicist Christopher Tully is readying a facility to detect these information-rich relics that appeared one second after the Big Bang, during the onset of the epoch that fused protons and neutrons to create all the light elements in the universe. Tully, a professor of physics at Princeton, runs a prototype lab in the U.S. Department of Energy's (DOE) Princeton Plasma Physics Laboratory (PPPL) that draws on the fact that neutrinos can be captured by tritium, a radioactive isotope of hydrogen, and provide a tiny boost of energy to the electrons emitted in tritium decay.

The prototype aims to measure this tiny extra energy with a precision never before achieved. The task, which has been compared to detecting a specific heartbeat in a packed sports arena, will require the coldest and darkest conditions achievable to prevent disruption of the exquisitely sensitive instruments. If successful, the project could lead to a major new experiment at PPPL to confirm or reassess the standard model of the Big Bang and its aftermath.

"We hope to take enough data to measure the neutrino or at least produce the world's most accurate measurement using calorimeter techniques by the end of 2017," Tully said. 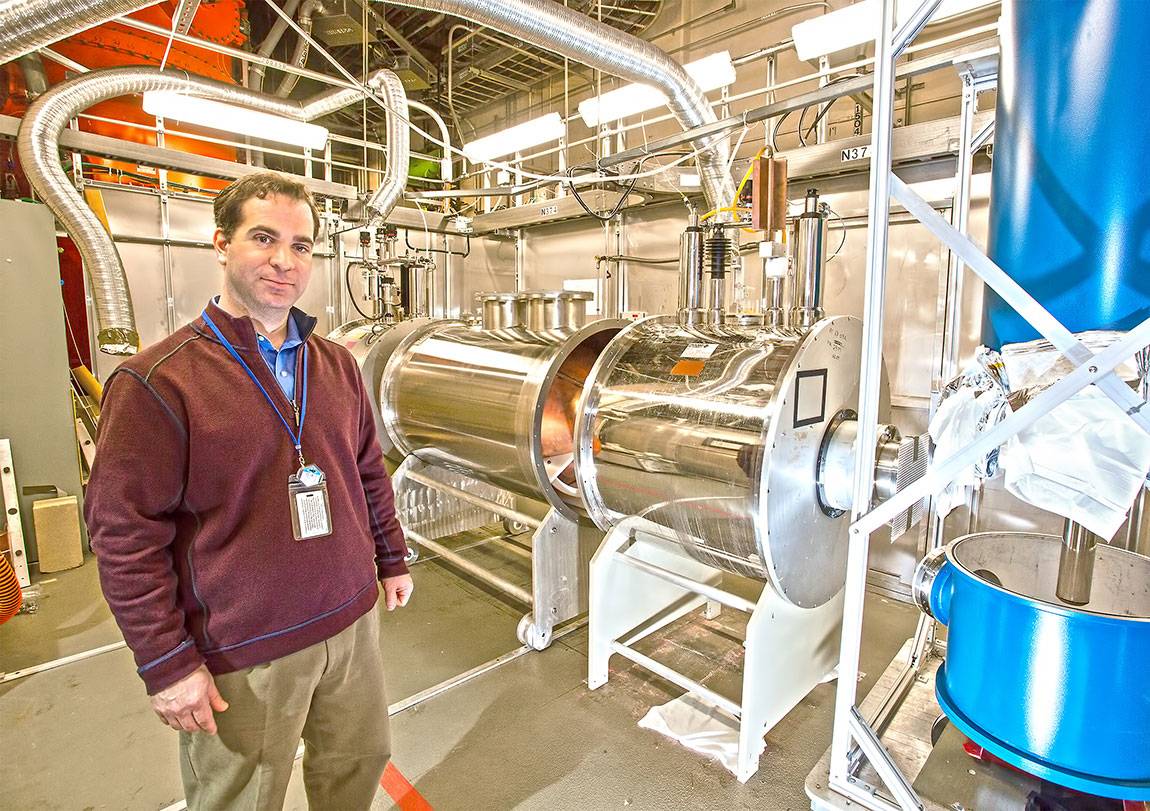 Princeton physicist Chris Tully stands in the PTOLEMY laboratory at the Princeton Plasma Physics Laboratory. Behind him are powerful superconducting magnets on either side of the vacuum chamber. (Photo by Elle Starkman, PPPL Communications)

The state-of-the-art system, which PPPL engineer Charles Gentile and other laboratory staff set up, consists of a pair of superconducting magnets joined to opposite ends of a 5-foot vacuum chamber, with the second magnet connected to a calorimeter that measures electron energy. Tully names the project PTOLEMY after the second-century Egyptian astronomer of Greek descent and as an acronym for "Princeton Tritium Observatory for Light, Early-universe Massive-neutrino Yield." Support comes from grants of $400,000 from the Simons Foundation in New York City and $330,000 from the John Templeton Foundation in Pennsylvania.

The hunt for Big Bang neutrinos will begin this summer after several years of preparation. Soon to arrive is a key ingredient: 1/100th of a microgram of tritium loaded onto a postage stamp-sized sheet of graphene, a layer of carbon just a single atom thick. This arrangement will produce a clean spectrum of tritium decay when it arrives from Savannah River National Laboratory. PPPL will handle this tritium safely in accordance with its DOE-approved Radiation Protection Program. The laboratory used higher quantities of tritium as a fuel, with the hydrogen isotope deuterium, for fusion experiments conducted on its Tokamak Fusion Test Reactor from 1993 to 1997.

Researchers will position the tritium-loaded graphene inside the first superconducting magnet, whose field strength is similar to the MRI systems that hospitals and clinics use. This field will guide electrons from the tritium decay into the neighboring vacuum chamber. Low-energy electrons will be filtered as they travel through a series of electrodes placed within the vacuum chamber as the magnetic field first dips in strength and then rises again as the electrons enter the second magnet, leaving only the highest-energy electrons for the calorimeter to analyze.

The calorimeter will be the most accurate instrument of its kind in the world. It will be hooked to a dilution refrigerator set at 10-to-50 millikelvins, a temperature more than 50 times colder than deep space and a small fraction of a degree above absolute zero. The extreme cold will keep the calorimeter poised between a superconducting state — one in which electrons can flow without resistance — and a non-superconducting state that provides resistance. When an electron with neutrino-supplied extra energy comes along, the calorimeter would signal it by rapidly becoming resistive.

This dilution refrigerator could make PPPL one of the hottest as well as the coldest spots in the solar system on days when the National Spherical Torus Experiment-Upgrade (NSTX-U), the laboratory's recently completed flagship facility, is running. The NSTX-U routinely conducts experiments at or above the 15-million-degree-Celsius core of the sun as it investigates fusion reactions as the energy for generating electricity.

The PTOLEMY project will have a major goal: to demonstrate the ability to measure the mass of Big Bang neutrinos and thus pave the way for a much larger experiment, one that would explore the decay from 100 grams of tritium.

The large new experiment would test the theory that predicts that some 330 Big Bang neutrinos per cubic centimeter exist throughout the universe. The enlarged PTOLEMY would count the number of electrons that neutrinos have bumped up in energy to determine whether this prediction is correct. Confirming it would validate current thought about the evolution of the cosmos since the Big Bang, while refuting it could overturn the model and lead to fresh insights.

The expanded experiment could have other far-reaching effects. It might detect so-called sterile neutrinos, hypothetical Big Bang particles that have no positive or negative charge and could be the source of invisible dark matter, which scientists say makes up 20 percent of the mass of the universe.

"My dream is to prove that measuring neutrino mass can work," he says, "and to have a beautiful picture of a major new facility that engineers can build."

The laboratory area in which PTOLEMY sits houses other equipment useful for furthering the central collaborative mission of the fusion energy lab. For example, developers of ITER, the international tokamak under construction in France, will test a diagnostic device on a powerful magnet next to the site. Work on PTOLEMY itself will involve graduate students and summer interns.