A Princeton University graduate student has worked with physicists at the U.S. Department of Energy's (DOE) Princeton Plasma Physics Laboratory (PPPL) to develop a method for limiting instabilities that reduce the performance of fusion plasmas. The more instabilities there are, the less efficiently the doughnut-shaped fusion facilities called tokamaks operate.

Reported in the journal Nuclear Fusion, the new method uses feedback from sensors for real-time control of the rotation of plasma that swirls within a tokamak and fuels fusion reactions. Imène Goumiri, a Princeton University graduate student in mechanical and aerospace engineering, led the design of a controller that employs two types of actuators. The first provides a torque — or twisting force that causes rotation — by injecting high-energy neutral particles into the plasma. The second uses a tokamak's three-dimensional coils to create a magnetic field that generates a torque by acting as a drag on the rotation and slowing it down. 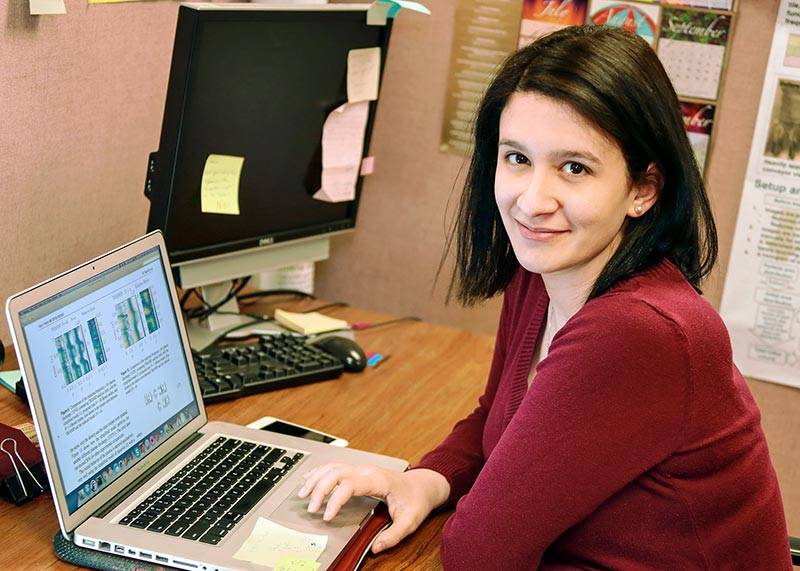 Princeton University graduate student Imène Goumiri (above) worked with physicists at the U.S. Department of Energy's Princeton Plasma Physics Laboratory to develop a method for limiting instabilities that reduce the performance of fusion plasmas. (Photo by Elle Starkman of the PPPL Office of Communications)

Goumiri built a model of plasma rotation from data collected from PPPL's National Spherical Torus Experiment (NSTX) before it was upgraded, and used it to construct the program in MATLAB software. She then translated the program into a predictive model based on PPPL's TRANSP code, the global standard for analyzing plasma performance. The TRANSP model found the new approach to be effective at controlling rotation.

"This confirmed the validity of our model and the efficacy of the controller," said Goumiri, the lead author of the paper. Co-authors included Goumiri's academic advisers Clarence Rowley, Princeton professor of mechanical and aerospace engineering, and David Gates, principal research physicist at PPPL and stellarator physics leader. Goumiri also worked with co-author Steve Sabbagh, a senior research scientist and adjunct professor of applied physics at Columbia University on long-term assignment at PPPL, and a member of Goumiri's doctoral committee who served as a scientific adviser.

The new program, which adapts quickly to feedback from the plasma, draws on the fact that rotating different sections of a plasma at different speeds creates a force called "shear" that lessens instabilities. Rotation also can disrupt transport, which leaks heat from the plasma and interferes with fusion reactions.

A unique aspect of the new model is its use of 3-D magnetic fields to manipulate the torque produced by the neutral beam injector. The drag created by these magnetic fields, technically known as "neoclassical toroidal viscosity," gives researchers more precise and continuous control of the plasma rotation.

Looking ahead, the researchers noted that the upgraded NSTX, called the National Spherical Torus Experiment-Upgrade (NSTX-U), has a second neutral beam injector that can affect a broader region toward the edge of the plasma. This broadened region could alter the shear and enable greater control of plasma instabilities.

The researchers also noted that this new class of controllers could be developed from simulations based on experimental data, with no need for additional experiments for calibration. The new method could replace classical controllers like proportional-integral-derivative (PID) systems, which use experiments to tune their parameters. The new method would necessitate fewer experiments and would provide a way to predict requirements for adjusting plasma rotation in future fusion facilities.

PPPL, located on Princeton's Forrestal Campus in Plainsboro, New Jersey, is devoted to creating new knowledge about the physics of plasmas — ultra-hot, charged gases — and to developing practical solutions for the creation of fusion energy. Results of PPPL research have ranged from a portable nuclear materials detector for anti-terrorist use to universally employed computer codes for analyzing and predicting the outcome of fusion experiments. The Laboratory is managed by the University for the U.S. Department of Energy's Office of Science, which is the largest single supporter of basic research in the physical sciences in the United States, and is working to address some of the most pressing challenges of our time.

The paper, "Modeling and control of plasma rotation for NSTX using neoclassical toroidal viscosity and neutral beam injection," was published in the March 2016 edition of Nuclear Fusion. The research was supported by the DOE Office of Science's Fusion Energy Sciences program.