Among the most feared events in space physics are solar eruptions, massive explosions that hurl millions of tons of plasma gas and radiation into space. Now researchers at the U.S. Department of Energy's Princeton Plasma Physics Laboratory have identified a mechanism that may halt eruptions before they leave the sun.

Solar outbursts can be deadly: If the first moon-landing mission had encountered one, the intense radiation could have killed the astronauts. And when eruptions reach the magnetic field that surrounds the Earth, the contact can create geomagnetic storms that disrupt cell phone service, damage satellites and knock out power grids.

NASA is eager to know when an eruption is coming and when what looks like the start of an outburst is just a false alarm. Knowing the difference could affect the timing of future space missions such as journeys to Mars, and show when steps to protect satellites, power systems and other equipment need to be taken.

The researchers' finding, reported in the December 24-31 issue of Nature magazine, provides a potentially important way to distinguish the start of explosions from buildups that will fail. This work was supported by the DOE Office of Science. 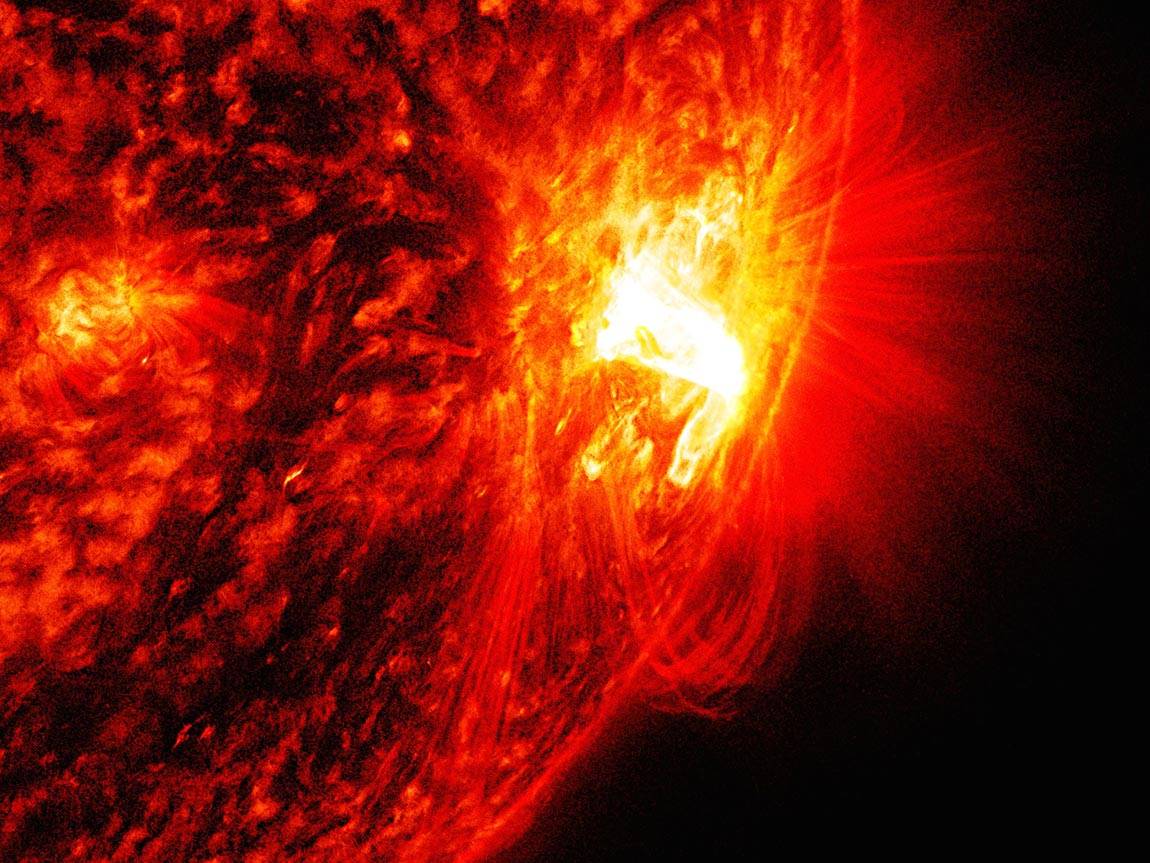 This solar flare occurred at the peak of the solar cycle in October 2014 with no observed eruptions. PPPL researchers say this is a promising candidate for studying the effect of guide magnetic fields. (Photo courtesy of NASA)

The violent eruptions, called "coronal mass ejections," stem from a sudden release of magnetic energy that is stored in the sun's corona, the outermost layer of the star. This energy is often found in what are called "magnetic flux ropes," massive arched structures that can twist and turn like twine. When these long-lived structures twist and destabilize, they can either erupt into the solar system or fail and collapse back toward the sun.

The researchers found in laboratory experiments that such failures occur when the guide magnetic field — a force that runs along the flux rope — is strong enough to keep the rope from twisting and destabilizing. Under these conditions, the guide field interacts with electric currents in the flux rope to produce a dynamic force that halts the eruptions. PPPL has discovered the importance of this force, called the "toroidal field tension force," which is missing from existing models of solar eruptions.

The researchers discovered the force's importance using the laboratory's Magnetic Reconnection Experiment (MRX), the world's leading device for studying how magnetic fields in plasma converge and violently snap apart. The scientists modified the device to produce both a flux rope, which stores a significant amount of energy that seeks to drive the rope outward, and a potential magnetic field like the ones that enclose the rope in the solar corona.

This potential magnetic field is composed of magnetic "strapping" and "guide" fields, each of which provides restraining forces. Eruptions burst forth when the restraining forces in the strapping field become too weak to hold the rope down, creating what is called a "torus instability" that shoots plasma into space. The guide field, which reduces the twist in the flux rope, had long been thought to be of secondary importance.

But the researchers found that the guide field can also play an important role in halting eruptions. When the flux rope starts to move outward in the presence of a sufficiently powerful guide field, the plasma undergoes an internal reconfiguration — or "self-organization" — that causes the eruption to lose energy and collapse.

"The presence of a substantial guide field should therefore indicate a reduced probability of eruption," said Associate Research Physicist Clayton Myers, first author of the paper.

Solar physicists should thus be on the lookout for guide fields, which can be found in relatively simple reconstructions of the sun's potential magnetic field, the authors said. One promising candidate for study is the largest active region in the peak solar cycle that took place in October 2014, which produced many large flares but no observed eruptions. Preliminary analysis of this region shows that a number of these flares were associated with failed eruptions that could have been caused by the mechanism the MRX experiments found.

PPPL, on Princeton University's Forrestal Campus in Plainsboro, New Jersey, is devoted to creating new knowledge about the physics of plasmas — ultra-hot, charged gases — and to developing practical solutions for the creation of fusion energy. Results of PPPL research have ranged from a portable nuclear materials detector for anti-terrorist use to universally employed computer codes for analyzing and predicting the outcome of fusion experiments. The laboratory is managed by the University for the U.S. Department of Energy's Office of Science, which is the largest single supporter of basic research in the physical sciences in the United States, and is working to address some of the most pressing challenges of our time. For more information, please visit the Office of Science website.