Researchers at Princeton University and the U.S. Department of Energy's Princeton Plasma Physics Laboratory (PPPL) have launched a new center to study the heliosphere, the complex and frequently violent region of space that encompasses the solar system.

This region is carved out by the solar wind — charged plasma particles that constantly stream from the sun — and gives rise to space weather that can disrupt cell phone service, damage satellites and knock out power grids. Such stormy weather results from solar flares and coronal mass ejections — huge solar eruptions that periodically hurl millions of tons of electrically charged plasma particles into the heliosphere. Eruptions that slam into the magnetosphere — the magnetic field that surrounds the earth and extends some 75 million miles into space — can trigger disturbances called geomagnetic storms. One notable outburst blacked out the Canadian city of Montreal and most of the province of Quebec for 12 hours in 1989. 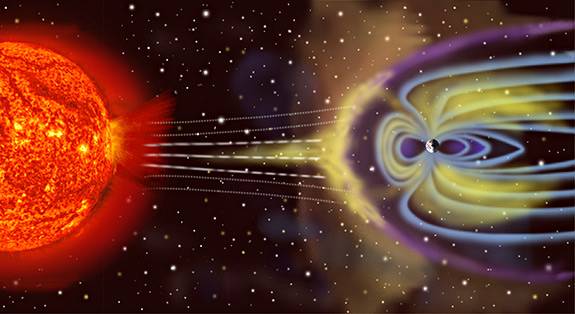 This computer simulation shows the solar wind in contact with the Earth's magnetosphere. The streaming wind compresses the magnetosphere on the side of the Earth that is nearest the sun, and stretches the magnetosphere into a long "tail" as the wind blows past the Earth and away from the sun. The new Princeton Center for Heliospheric Physics aims to better predict and deepen understanding of these forces. (Illustration courtesy of NASA)

The Princeton Center for Heliospheric Physics aims to sharpen the capacity to predict solar eruptions and to deepen understanding of the plasma flows and magnetic forces that emanate from the sun.

"All this is the domain of heliospheric physics," said Amitava Bhattacharjee, head of the theory department at PPPL and co-director of the new center with PPPL physicist Jay Johnson.

The center combines the resources of Princeton's Department of Astrophysical Sciences and PPPL and facilitates collaboration between them. For example, the joint enterprise will bring together the Princeton work on an explosive phenomenon called magnetic reconnection with PPPL research on the subsequent acceleration of plasma particles caused by waves in the plasma, which takes place in the inner magnetosphere — the section closest to Earth. Such processes underlie geomagnetic storms and related phenomena known as substorms.

"Having these complementary efforts within the center provides us with the essential tools for better understanding of space weather," Johnson said.

Contributors to the center include Princeton astrophysicists James Stone and Anatoly Spitkovsky, whose focus on plasma dynamics beyond the solar system is closely related to issues that heliospheric scientists face.

"We plan to share knowledge, computational tools and results in a way that will benefit all parties," said Stone, a professor of astrophysical sciences and applied and computational mathematics. "We are lucky to have this new center right next door at PPPL."

• Development of a computer code to model as precisely as possible the physics behind the role of magnetic reconnection in geomagnetic storms. Current codes cannot provide detailed descriptions of the movement of charged particles during reconnection events, in which the magnetic fields in plasma break apart and reconnect with the force of millions of tons of TNT.

"It has become clear that while these models are powerful, important effects are missing," said Bhattacharjee, who is also a professor of astrophysical sciences at Princeton.

Funds for this project come from a five-year, $3.5 million grant from the National Science Foundation (NSF) and NASA to five institutions, with the new center receiving $1.25 million, the largest single slice. Each institution is to model a different aspect of space weather in what NSF termed "a theoretical and computational grand challenge." Participants in addition to Princeton include the University of New Hampshire, the University of California-San Diego, Los Alamos National Laboratory and NASA's Goddard Space Flight Center.

• Studies of the interaction between the solar wind and the magnetosphere that affect the Earth. This interaction redistributes mass and energy throughout the magnetosphere and can whip up disturbances that pose danger to spacecraft and to the human exploration of space. The dynamics of these processes in the inner magnetosphere is a key focus of researchers in the PPPL theory group who are members of the center.

• Research on heliospheric topics ranging from solar radio bursts that can disrupt cell phone service to the turbulent transport of plasma particles in the magnetosphere and the behavior of plasma waves in the magnetic field that surrounds the planet Mercury. Broad funding for the center's work on such topics comes from NSF and NASA.

Bolstering the center's research will be its ability to tap into other projects at PPPL. For example, the Magnetic Reconnection Experiment (MRX) at PPPL has produced reconnection under laboratory conditions for nearly two decades. Such data will enable center researchers to test the power of their codes to predict the outcome of MRX experiments.

"If we can do that well," said Bhattacharjee, "it will give us confidence that our codes are good for predictive capability for reconnection outside the realm of the laboratory."