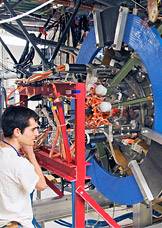 Scientists at the U.S. Department of Energy's Princeton Plasma Physics Laboratory (PPPL) are conducting experiments on a process known as "magnetic reconnection," one of the most common but least understood phenomena in the universe. PPPL researchers working on the Magnetic Reconnection Experiment (MRX) are aiming to improve knowledge about solar outbursts, the formation of the sun and stars, and nuclear fusion reactions. Here, Seth Dorfman -- a graduate student in Princeton University's Program in Plasma Physics, which is based at PPPL -- examines the MRX device at the lab.

With the click of a computer mouse, a scientist at the U.S. Department of Energy's Princeton Plasma Physics Laboratory (PPPL) sends 10,000 volts of electricity into a chamber filled with hydrogen gas. The charge heats the gas to 100,000 degrees Celsius.

In an instant -- one-thousandth of a second, to be precise -- a process called "magnetic reconnection," a powerful force that can light up the skies, takes place in a device roughly the size of a sport utility vehicle.

PPPL researchers have run this and similar carefully controlled experiments -- called "shots" -- more than 100,000 times since 1995, and amassed volumes of data and numerous scientific papers. The shots recreate one of the most common but least understood phenomena in the universe -- one that gives rise to the northern lights, solar flares and geomagnetic storms, and that can disrupt cell phone service, black out power grids and damage orbiting satellites.

Researchers at PPPL have brought this basic process down to earth in miniature to be studied under laboratory conditions in the Magnetic Reconnection Experiment (MRX), the leading project of its kind in the world in terms of the quantity and quality of the data it has collected.

"Here we can actually recreate reconnection," said Masaaki Yamada, a PPPL physicist and principal investigator for MRX, "This is not theory or a computer simulation." Hantao Ji, principal research physicist at PPPL for MRX, concurred: "This provides a chance to see what's really going on in reconnection." 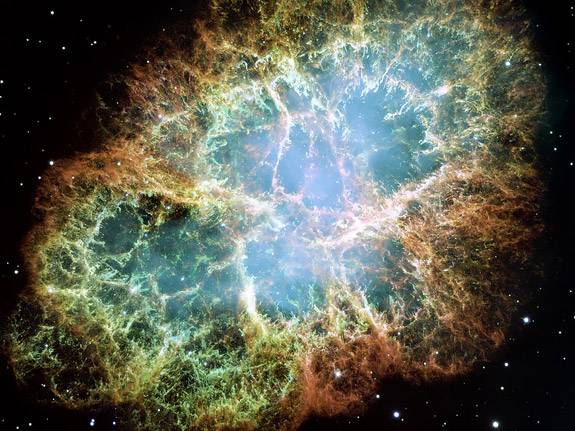 Scientists believe that magnetic reconnection is behind the extraordinary bursts of radiation that have emerged from the center of the Crab nebula, the remains of an exploded star. Astrophysicists from Princeton and other institutions are paying close attention to the efforts of the MRX research team, hoping to better understand some of the mysteries surrounding the phenomenon. (Image courtesy of NASA; the European Space Agency; and Jeff Hester and Allison Loll, Arizona State University)

The experiments seek to unravel the secrets of magnetic reconnection and ultimately provide benefits including improved prediction of solar outbursts and dangerous geomagnetic storms; increased understanding of the formation of the sun and stars; and greater control of the nuclear fusion reactions that PPPL researchers are studying as a clean fuel for generating electric power.

Magnetic reconnection takes place when magnetic lines of force -- or field lines -- break apart and reconnect with a violent burst of energy that, in huge bodies such as the sun and stars, has the explosive power of millions of tons of TNT. This occurs when superheated and electrically charged gases called plasmas converge. Plasmas consist of electrons and ions -- atoms that have been stripped of one or more electrons -- and are the basic elements of the sun and stars.

PPPL's study of the reconnection phenomenon is made possible by the MRX device, which resembles a large steel barrel attached to arrays of tubes and wires. Inside are two doughnut-shaped coil systems called "flux cores" that produce plasmas whose magnetic field lines reconnect while tiny probes measure the results. The MRX device can discharge 30,000 kilowatts of power for one-thousandth of a second, or enough energy to briefly power 25,000 homes.

PPPL, which is managed by Princeton University, launched the MRX project 16 years ago under the direction of Yamada to increase understanding of the role that magnetic reconnection plays in the disruption of plasma, which can force nuclear fusion reactors to shut down. Improved knowledge of magnetic reconnection would advance the development of fusion as a clean source of energy for generating electricity, which is the core mission of the laboratory.

The experiment soon caught the eye of the astrophysical community, which also saw benefits for its own field of study. Astrophysicists from Princeton and other institutions are closely watching the efforts by PPPL scientists to unravel some of the mysteries surrounding magnetic reconnection.

"Plasma processes, such as reconnection, influence the behavior of astronomical objects of all sizes, from solar flares to ionized gas jets that travel through galaxies," said Stewart Prager, director of PPPL. "One of the goals of PPPL is to understand the plasma universe, and MRX is making enormous contributions to that mission." 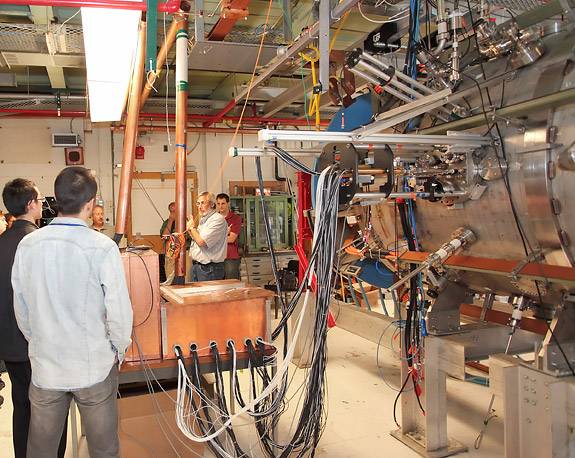 William Slavin (center), head of PPPL's safety division, gives graduate students a tour of the MRX device, which resembles a large steel barrel attached to arrays of tubes and wires. The device allows PPPL researchers to recreate the magnetic reconnection process in a controlled setting. (Photo by Elle Starkman)

Studying the triggers of solar outbursts

A key puzzle that MRX researchers are trying to solve is why magnetic reconnection takes place in the sun many thousands of times faster than theorists have been able to understand. This mystery hinders forecasting of volatile "space weather," which is an important factor in the development of future space exploration missions. "You can't predict solar storms when you don't understand reconnection," noted Princeton astrophysicist James Stone.

Solar storms occur when reconnection causes huge plasmas to erupt from the sun and slam into the Earth's magnetosphere -- the magnetic field that surrounds the planet -- with a potentially damaging impact. One such eruption stirred up a geomagnetic disturbance that blacked out the city of Montreal and most of the Canadian province of Quebec for nearly 12 hours in 1989.

Solar outbursts occur in 11-year cycles with a new cycle now starting and expected to reach a peak -- or "solar maximum" -- in 2013. However, scientists currently are unable to forecast the precise day or month of these eruptions.

MRX researchers are gradually zeroing in on the process behind the mysterious mechanism of reconnection that triggers the storms. Laboratory findings show that the electric current embedded into plasmas suddenly dissipates when these superhot gases converge, enabling reconnection to take place. Further experiments have confirmed that part of the reason for the abrupt dissipation is that the ions and electrons inside the plasmas have different velocities. The electrons thus behave differently from the ions -- as measured by a phenomenon called the "Hall effect" that is typically associated with magnetized electrons and unmagnetized ions in a plasma.

Such discoveries are redefining traditional notions of how reconnection works.

"The MRX is uncovering new physics that is modifying the theories that we thought had explained reconnection," said astrophysicist Russell Kulsrud, a Princeton professor emeritus. Through the experiment, PPPL scientists have "made many detailed measurements and (are) discovering many new things that we don't understand," Kulsrud added.

MRX findings will help guide a four-satellite exploration of reconnection that NASA scientists plan to launch in 2014. The spacecraft will sweep through the magnetosphere on a multiyear mission to study the regions where reconnection takes place.

"We hope to provide a database that will suggest what kind of data-taking is most efficient," Yamada said.

Knowledge of space weather will be vital to the safety of crews of possible future missions to Mars. The astronauts could be exposed to high levels of radiation if solar storms were to break out during flight, so the ability to pinpoint the timing of reconnection events that could lead to such storms is crucial, Yamada noted.

Through their work on the MRX experiment, PPPL researchers also aim to gain a better understanding of the forces behind issues ranging from the makeup of the skies and stars to clean energy development.

Magnetic reconnection underlies the northern lights, the brilliant auroras that light the night sky near the north and south poles. Auroras occur when relatively low-energy plasmas that stream from the sun connect with the magnetosphere and produce heated particles that give rise to the light shows. These plasma flows from the sun are known as "solar wind."

Magnetic reconnection is also suspected to be behind the extraordinary bursts of radiation that have emerged from the center of the Crab nebula -- the remains of an exploded star -- some 6,500 light years from Earth. Scientists trace the bursts to electrons that have accelerated to the highest level of energy ever observed in a fixed celestial body.

"You need something like reconnection to explain these very high-energy particles," said astrophysicist Jonathan Arons of the University of California-Berkeley.

Perhaps the most basic issue related to magnetic reconnection is its role in the creation of stars, which begin as clouds of charged particles that collapse under gravity. Accompanying this process is the reconnection of magnetic field lines that are present in the original cloud and must separate out for the star to be born. This activity happens much faster than current theory indicates, so MRX experiments "are constructed to find out the physics of what's actually going on," Princeton's Kulsrud noted.

Closer to home, reconnection creates a disruption in plasmas during nuclear fusion experiments such as those under way at PPPL. This disruption can force fusion reactors to shut down.

While the impact of magnetic reconnection on fusion research was the inspiration for the launch of MRX, the nature of the project -- scaling down massive phenomena into a laboratory setting -- is yielding insights beyond PPPL.

"If you're in space you observe what happens," said University of Maryland physicist James Drake. "In the lab you can vary the plasma conditions, which provides a new avenue for exploring the process."

The ability to conduct controlled magnetic reconnection experiments is the key to the MRX project, which is funded by several federal agencies, including the U.S. Department of Energy, the National Science Foundation, the Office of Naval Research and NASA.

"The important part is that we can create with control, and then study the reconnection process," said PPPL's Yamada. "In nature you cannot."