NSTX project will produce most powerful spherical torus in the world

The U.S. Department of Energy's (DOE) Princeton Plasma Physics Laboratory (PPPL) is getting an earlier-than-expected start on a $94 million project as the next stage of its mission to chart an attractive course for the development of nuclear fusion as a clean, safe and abundant fuel for generating electricity.

The project will upgrade the major test facility at PPPL, the National Spherical Torus Experiment (NSTX), over the next 30 months, with completion slated for 2014. The work will enhance the position of the NSTX as the world's most powerful spherical torus — or tokamak — a device that controls the superheated and electrically charged gases called plasmas that create fusion power.

The overhaul "will be a huge boost to all NSTX science missions," said Stewart Prager, director of PPPL, which is managed by Princeton University for the DOE Office of Science and has been a leader in fusion research for 60 years. Experiments done on the upgrade, he said, "will establish the physics basis to determine whether the NSTX design is suitable for a 'U.S. fusion nuclear science facility' — a possible next major research facility that would operate with fusion fuel." 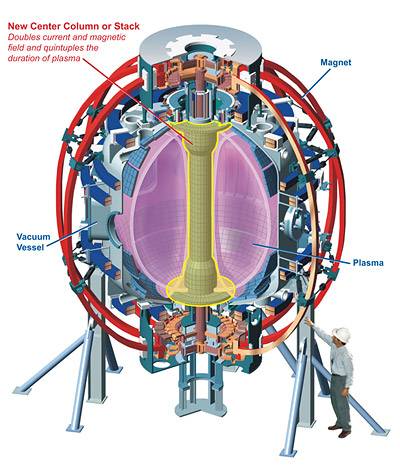 The upgrade of the National Spherical Torus Experiment (NSTX) — the Princeton Plasma Physics Laboratory's major test facility — will provide a more powerful tool for the lab in pursuing the development of nuclear fusion as a clean, safe and abundant fuel for generating electricity. Work on the NSTX will take place over the next 30 months. (Image courtesy of the Princeton Plasma Physics Laboratory)

Construction has been cleared by DOE officials to start immediately, six months ahead of schedule. Plans originally had called for the work to begin after the conclusion of a series of experiments on the NSTX tokamak. But when technical difficulties delayed the start of the experiments, PPPL managers decided to move directly to the upgrade rather than spend an undetermined amount of time addressing the technical issue. Specifically, a short that damaged a key piece of magnetic equipment would have been expensive and time-consuming to replace.

Work on the upgrade has brought excitement to the technicians and engineers at the laboratory. "We're building something that's one of a kind, that hasn't been built before," said Michael Williams, associate director for engineering and infrastructure at PPPL.

Fusion takes place when the atomic nuclei in plasmas combine at extremely high temperatures and release a burst of energy. Such reactions drive the sun and the stars. But sustaining fusion in the laboratory has proven quite difficult because plasmas that leak from the confinement can halt the reaction. Controlling the plasma is thus a basic goal of fusion research.

PPPL physicists will use the NSTX upgrade to assess the role of the compact reactor for the future development of fusion power. The spherical NSTX torus confines its plasma in the shape of a cored apple, unlike bulkier conventional tokamaks that produce doughnut-shaped plasmas and can be more costly to construct.

PPPL scientists are eager to explore mysteries that have puzzled them for years. A key issue is whether the NSTX reactor can maintain its record-high level of a measure called "beta" — the ratio of the pressure of a plasma to the strength of the magnetic field that confines it — as the plasma grows hotter. The higher the beta, the more cost-effective the confinement.

The NSTX upgrade will furnish new tools for probing such issues. The overhaul "will provide ample research opportunities for five to 10 years' worth of work at least," said Michael Zarnstorff, deputy PPPL director for research. "The whole NSTX group is quite excited by the opportunities and the leadership position that it will be in."

The makeover will boost the principal capabilities of the NSTX reactor, which began operating in 1999. The device puts high-voltage current into an isotope — or form — of hydrogen gas to make the intensely hot plasma that is confined inside the reactor's magnetic field. The upgrade will double the field strength to one tesla — or 20,000 times the strength of the Earth's magnetic field. The electric current flowing in the plasma will also double and reach 2 million amperes. By contrast, a 100-watt light bulb draws one ampere of current.

Achieving these increases calls for widening a stack at the center of the reactor that puts current in the plasma and helps to complete the magnetic field. Widening the center stack also will increase the electric pulse that drives the plasma current from one second to five seconds, giving researchers more time to study the plasma.

The enhancements will help double the temperature at the core of the plasma to at least 20 million degrees Celsius, or twice the approximately 10-million-degree Celsius core of the sun. New heating also will come from installation of a second device called a "neutral beam injector" to go with the one currently on the machine.

The increased power will enable PPPL scientists to tackle these major questions:

How PPPL scientists handle the increased flux could serve as a model for ITER, a major conventional test reactor that a consortium of countries including the United States is building in the south of France. ITER aims to produce a sustained fusion reaction — or  "burning plasma" — by the late 2020s that will put out more energy than is needed to create it — a basic requirement for future commercial reactors.

The NSTX upgrade could also serve as the gateway to a next-generation spherical torus that would produce a burning plasma to complement the output of ITER. Such a spherical torus would be roughly twice as powerful as the NSTX upgrade, said deputy PPPL director Zarnstorff, and would be used to test components for a commercial fusion reactor. Fusion energy experts expect a commercial reactor to be in operation by 2050.