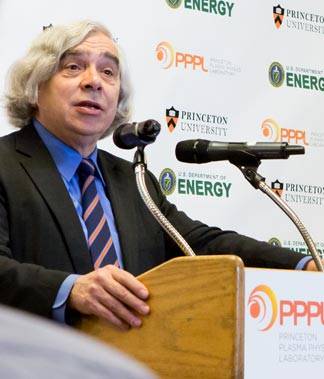 In a towering building just outside of Princeton, scientists, policymakers and Princeton University administrators walked among twisting pipes, countless valves, massive control panels and lofty catwalks to see the newest "star on Earth" — an enhanced fusion energy device that produces plasma at temperatures that exceed those of Earth's sun.

The National Spherical Torus Experiment-Upgrade (NSTX-U), a spherical tokamak housed at the Princeton Plasma Physics Laboratory on Princeton's Forrestal Campus, was dedicated by the U.S. Department of Energy (DOE) May 20 following a four-year, $94-million upgrade funded by the DOE Office of Science. The NSTX-U now stands as the most powerful spherical torus fusion facility in the world.

NSTX-U will allow researchers around the world to explore how to create fusion reactions, wherein light elements collide and fuse together, releasing enormous amounts of energy. Fusion reactions power stars and occur within the high-temperature state of matter plasma. Fusion energy could provide society with clean, reliable, safe and abundant energy that uses seawater as fuel. It would greatly reduce or eliminate the need to burn fossil fuels or manage nuclear waste, and curtail the accumulation of greenhouse gases in Earth's atmosphere. 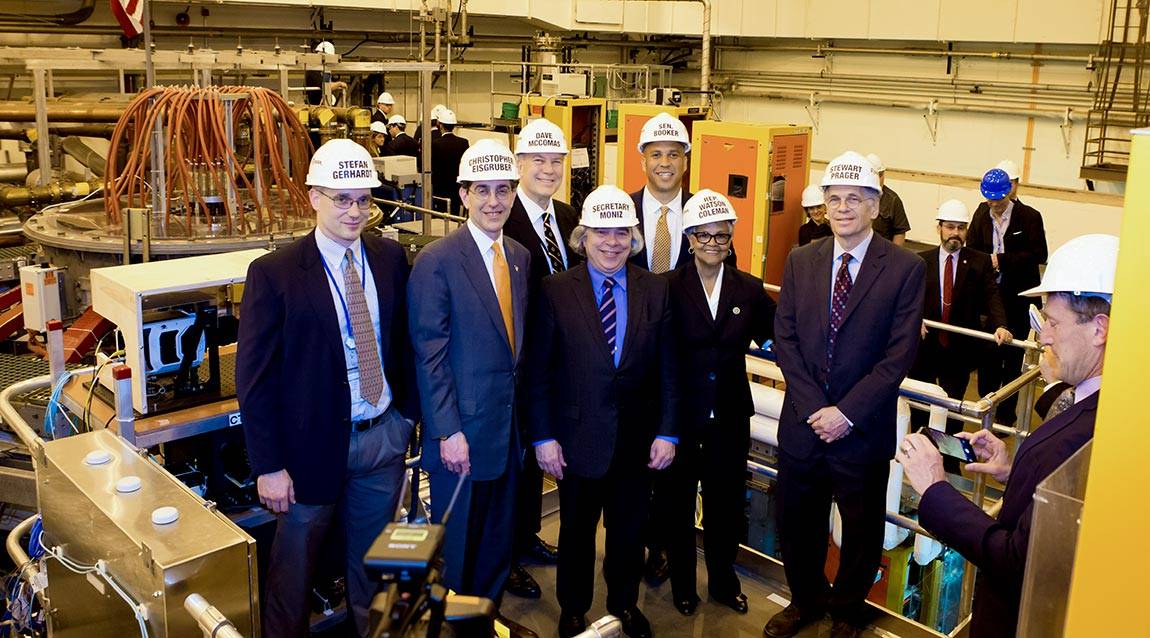 "This upgrade means that fusion remains a priority in the nation's energy portfolio," said Princeton President Christopher L. Eisgruber. "NSTX-U keeps the United States and Princeton at the forefront of fusion science, poised to seize exciting opportunities to create a clean, safe and prosperous future."

After touring the device, U.S. Department of Energy Secretary Ernest Moniz discussed the importance of NSTX-U — which he called the "most promising path right now to fusion" — to the nation's fusion program and energy sector. Moniz also unveiled a plaque mounted in the NSTX-U control room that is dedicated to the physicists, engineers and technologists who made NSTX-U a reality and will keep it running for at least the next decade. 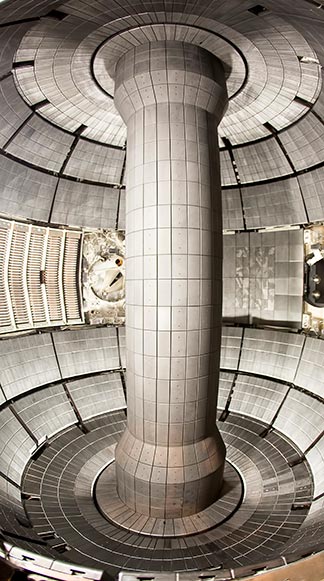 The NSTX-U now stands as the most powerful spherical torus fusion facility in the world, producing plasma at temperatures hotter than Earth's sun. The reactor will allow researchers around the world to explore how to create fusion reactions, which release enormous amounts of energy and could provide society with clean, reliable, safe and abundant power. (Photo by Elle Starkman, Princeton Plasma Physics Laboratory)

"This is a big step for our fusion program, for the country's fusion program and, in a broader context as well, for understanding the challenges of plasma science," said Moniz, who also is a physicist. "The next 10 years will produce a lot of terrific science and attack some pretty tough engineering problems."

Moniz said that public support of research and innovation such as NSTX-U is essential to the United States' investment and contribution to the growing clean-energy sector, which he called a "trillion-dollar opportunity." He noted that when the country's national laboratories — of which PPPL is one of 17 — have "good, strong connections to the university, it just adds to the effectiveness."

"We're going to have to have increasing ambition year in, year out and decade in, decade out going forward to reach the kind of goals that the vast majority of the scientific community would argue that we need to reach," Moniz said.

Designed and built at PPPL, NSTX-U doubles the heating power, magnetic-field strength and plasma current of its predecessor, and increases the duration of fusion experiments to up to five seconds. The machine produces plasma every 15-20 minutes and 350 researchers at 55 institutions around the globe help analyze the results.

"This is exciting new territory, and we're thrilled to embark on the next frontier of fusion research. This device could transform the world by showing us the way to a pilot plant design for the generation of power from fusion energy for use by all," Prager said. 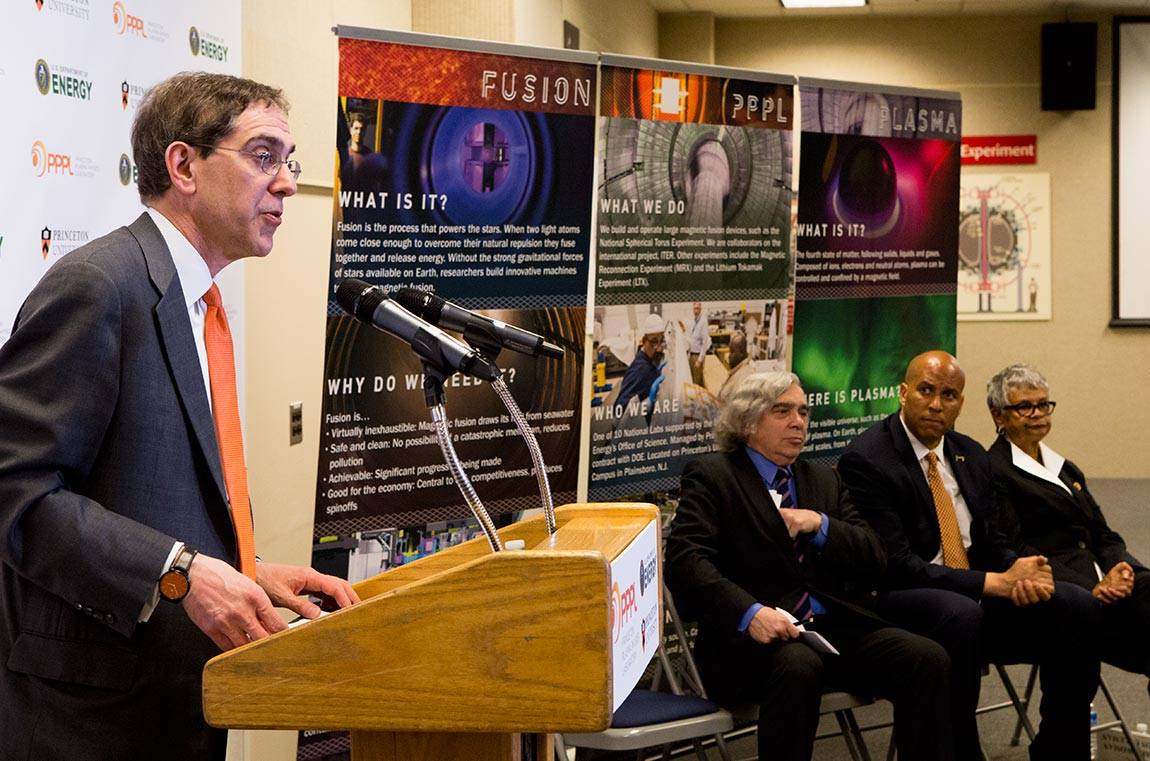 U.S. Sen. Cory Booker and U.S. Rep. Bonnie Watson Coleman also attended the dedication. Booker discussed the promise that clean energy holds for the health and wellbeing of people. He talked about asthma and the other ailments caused by air pollution that plague residents of cities such as Newark, where he lives.

"Today I celebrate a milestone, an achievement right here at Princeton University," Booker said. "I'm proud to stand before scientists and engineers who are working on something that can be a bold step forward for humanity.

"I want to thank you on behalf of a lot of folks who can look forward to a brighter future," he continued. "The metaphor that is most fitting really is that of a star because the light that you cast truly could push away a tremendous amount of darkness." 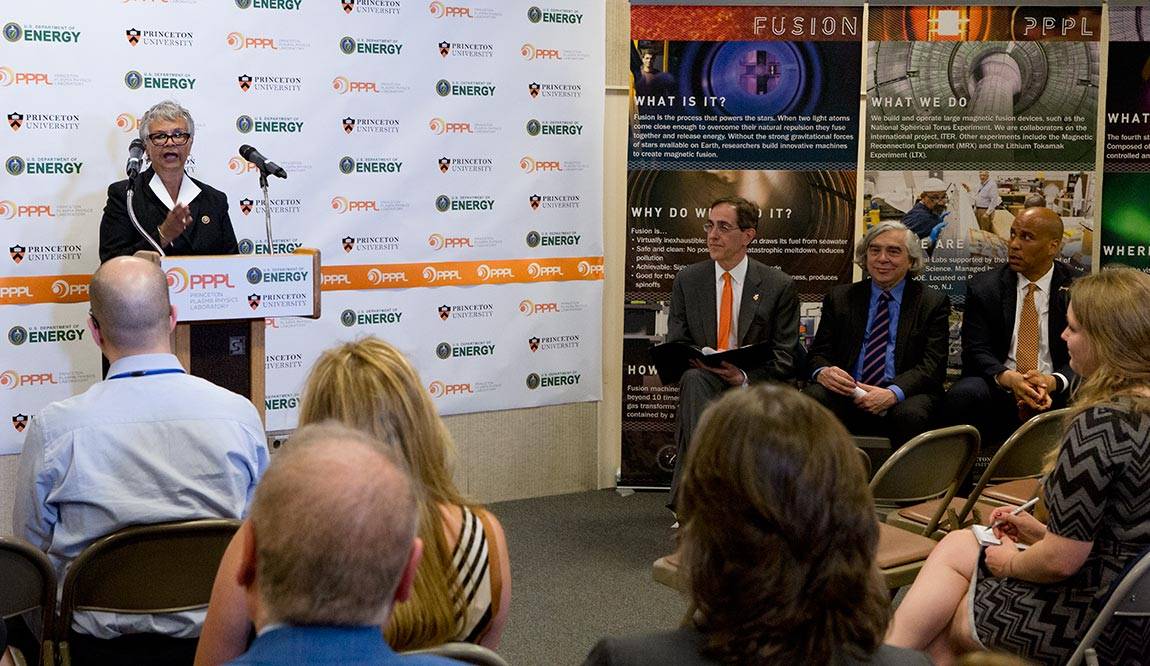 Watson Coleman talked about the role of evidence-based science in solving national issues such as energy supply. (Photo by Denise Applewhite, Office of Communications)

Watson Coleman said that NSTX-U and the potential of fusion energy are encouraging for the future of research in the country and the state, especially in a political environment that can be dismissive of science.

"New Jersey is very much instrumental in the innovation that we need, but we're not necessarily getting the attention we deserve," Watson Coleman said.

"While I may not completely understand the science of it, I do understand that we need energy that is sustainable," she said. "We must recognize that evidence-based science is much better for us to pursue than anecdotes and half-hearted ignorance."

Booker said he wants the United States to be a "net exporter" of innovation such as NSTX-U, and discussed the importance of clean energy technology such as fusion to improving human health. (Photo by Denise Applewhite, Office of Communications)

NSTX-U draws on a 65-year-old legacy of fusion energy research at PPPL, where in the 1950s physicist Lyman Spitzer created a machine he called a stellarator to produce energy the same way as the sun. Experimental stellarators and tokamaks, the two most prominent fusion reactor designs, now dot the globe.

PPPL, on Princeton's Forrestal Campus in Plainsboro, New Jersey, is devoted to creating new knowledge about the physics of plasmas — ultra-hot, charged gases — and to developing practical solutions for the creation of fusion energy. Results of PPPL research have ranged from a portable nuclear materials detector for anti-terrorist use to universally employed computer codes for analyzing and predicting the outcome of fusion experiments. The laboratory is managed by the University for the U.S. Department of Energy's Office of Science, which is the largest single supporter of basic research in the physical sciences in the United States, and is working to address some of the most pressing challenges of our time. 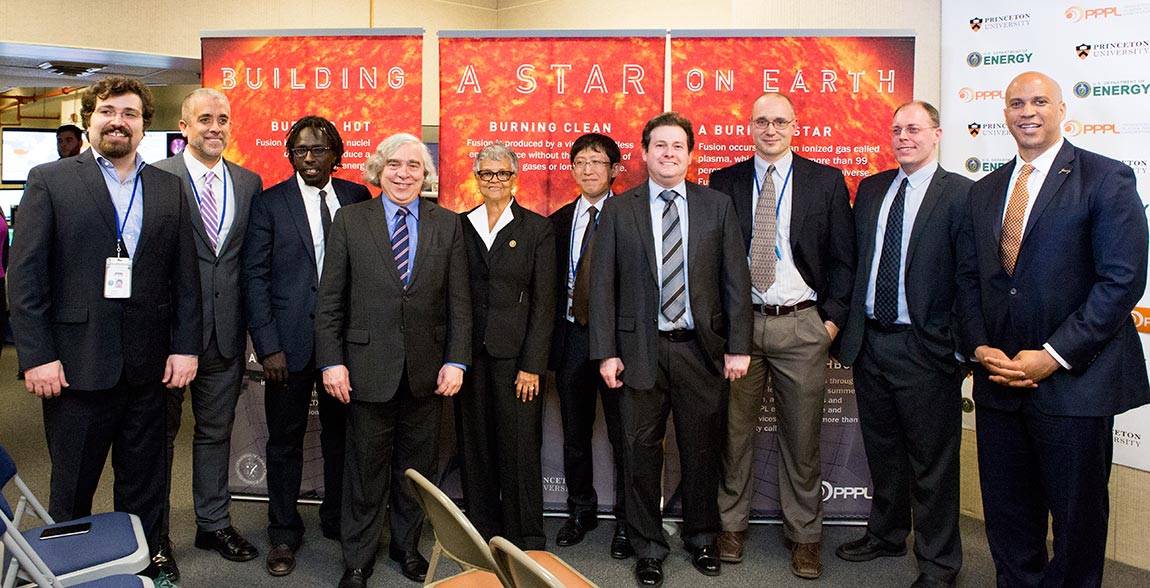 Moniz and Watson Coleman (center) joined Booker (far right) in congratulating the PPPL scientists who have received early-career awards from the DOE. (Photo by Denise Applewhite, Office of Communications) 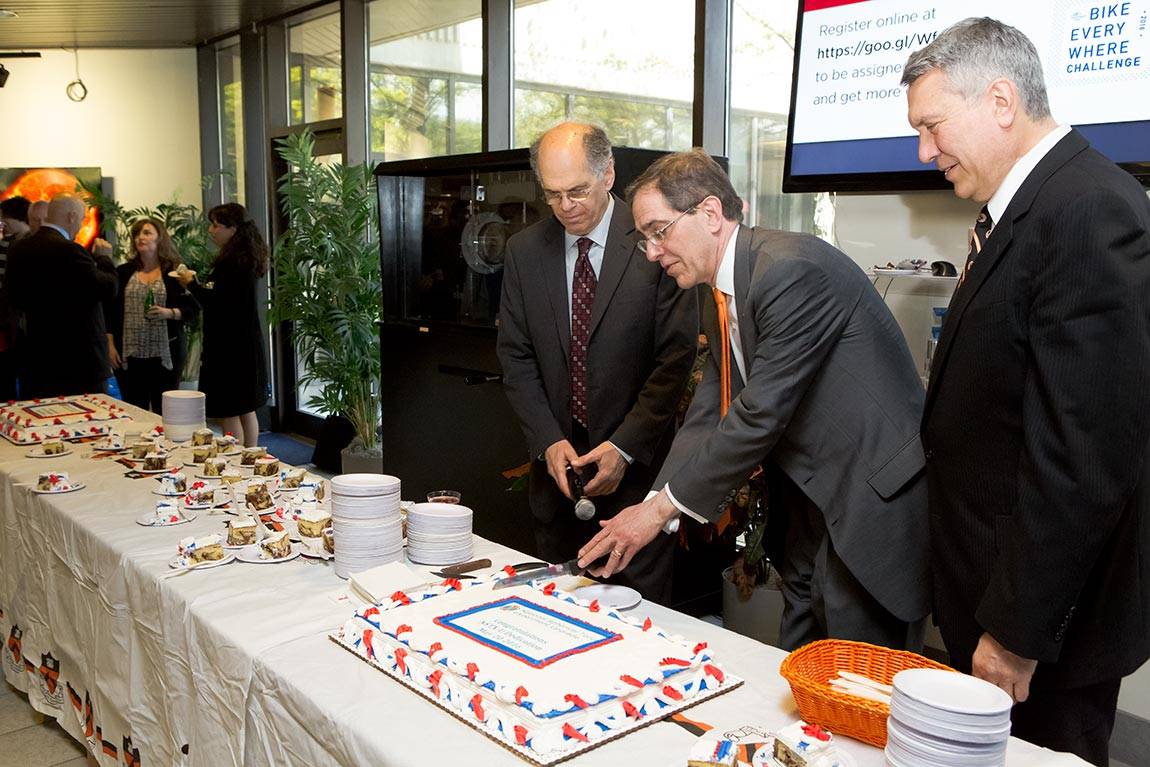 President Eisgruber cuts a cake at a reception that followed the dedication and tour of NSTX-U. With him are Prager (left) and McComas. (Photo by Denise Applewhite, Office of Communications) 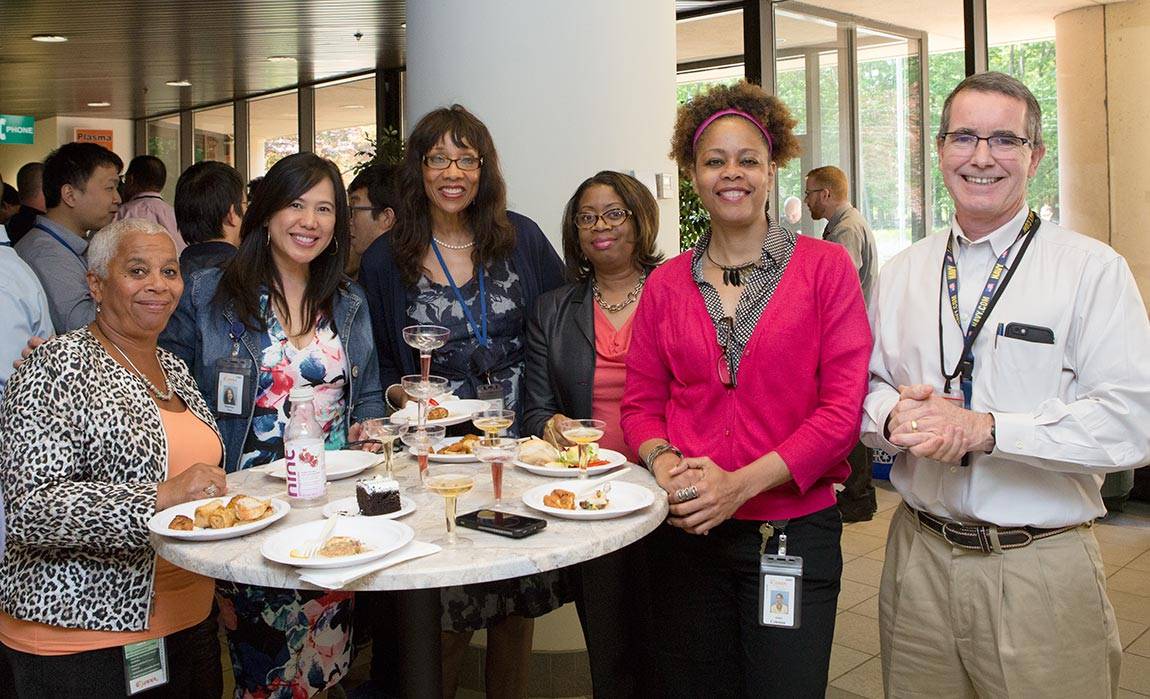 PPPL researchers and staff were celebrated for their effort in upgrading NSTX-U and pursuing clean energy for the world and nation. (Photo by Denise Applewhite, Office of Communications)

Moniz unveiled a plaque mounted in the NSTX-U control room that is dedicated to the physicists, engineers and technologists (above) who made NSTX-U a reality and will keep it running for at least the next decade. (Photo by Elle Starkman, Princeton Plasma Physics Laboratory)