Low-temperature plasma, a rapidly expanding source of innovation in fields ranging from electronics to health care to space exploration, is a highly complex state of matter. So complex that the Princeton Plasma Physics Laboratory (PPPL) has teamed with Princeton University to become home to a collaborative facility open to researchers from across the country to advance the understanding and control of this dynamic physical state.

The new facility, to launch this October with U.S. Department of Energy (DOE) funding of $1.2 million a year for five years, opens the extensive diagnostic and computational resources at PPPL and Princeton to the academic, scientific and industrial communities. More than 40 researchers are estimated to be interested in topics that the facility will explore, said PPPL physicist Yevgeny Raitses, principal investigator of the new unit, the Princeton Collaborative Research Facility on Low Temperature Plasma. 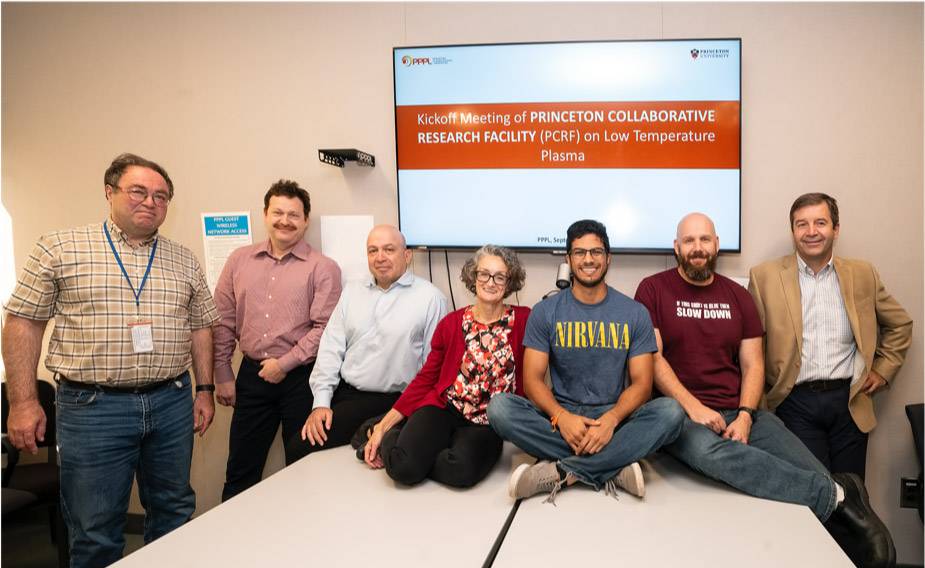 The Princeton Plasma Physics Laboratory has teamed up with Princeton University to create a facility open to researchers from across the country to advance the understanding and control of low-temperature plasma, which is a dynamic source of innovation for modern technologies. Shown are members of the collaborative research team, from left: Mikhail Shneider; Igor Kaganovich; Yevgeny Raitses; Sophia Gershman; Nirbhav Chopra, Princeton plasma physics graduate student who will use the new facility; Shurik Yatom; and Arthur Dogariu.

Raitses heads the PPPL Laboratory for Plasma Nanosynthesis, which pioneers research on low-temperature plasma to improve the production of nanoparticles — substances millions of times thinner than a human hair found in everything from swimwear to pharmaceuticals. All state-of-the-art instruments housed in the plasma nanosynthesis laboratory will become available to collaborators in the new facility.

Raitses and physicist Igor Kaganovich, deputy head of the PPPL Theory Department, have long extended the outreach of low-temperature plasma research. Over the past 10 years they have collaborated with companies on topics ranging from the fabrication of microchips to the production of medical treatments to the development of a power switch to modernize the electric grid.

Such companies could now make use of the new facility. “I am delighted with this award,” PPPL Director Steve Cowley said of the new collaborative unit. “Through the leadership of Yevgeny and Igor and collaborations with Princeton University we have developed a world-class program in low temperature plasma science — this will take us to another level.”

Low-temperature plasma contrasts with the superhot plasma that PPPL investigates that fuels the fusion energy that powers the sun and stars. Fusion plasmas consist chiefly of free-floating electrons and atomic nuclei, or ions, while low-temperature plasmas, which are up to 10,000 times cooler, include a large complement of neutral and partially ionized atoms mixed in with these particles.

The mixture interacts with solids and liquids to produce applications in a wide range of fields. Among the key topics the facility will explore are interactions with liquids that can affect chemical processes and improve the production of environmental and health care systems, to cite two examples.

Also to be explored is the interface between plasma and solid-state physics. The process could lead to low-cost and high-volume production of photovoltaic cells for turning sunlight into electricity, among other developments affecting solid-state matter.

Hosting such research comes naturally to PPPL, the only national laboratory dedicated to the study of fusion energy and plasma science. “It’s important for the nation’s plasma physics lab to make a major contribution to understanding the physics of low-temperature plasmas,” said Jon Menard, deputy director for research at PPPL. “This facility will open all the tools in the laboratory’s low-temperature area for wider use.”

Scientists at PPPL and Princeton will provide guidance to collaborators who come to the facility from companies, universities and laboratories throughout the country. Among physicists joining Raitses and Kaganovitch on the PPPL team will be Sophia Gershman, an expert in the interaction of plasma and liquids, and Shurik Yatom, who has developed methods for characterizing the synthesis of nanoparticles in plasma in situ, or while the process is taking place. Additional PPPL physicists will conduct research and give guidance to researchers using the facility.

Heading the Princeton University team will be physicists Mikhail Shneider, an expert in plasma physics, fluid dynamics and non-linear optics, who will serve as co-principal investigator. Arthur Dogariu, who pioneered several advanced optical diagnostic techniques, will lead the collaborative center’s experimental efforts at Princeton. University laboratories and centers, including the Princeton Institute for the Science and Technology of Materials (PRISM), will provide access to collaborators, with faculty members and graduate students serving as users and partners in the new facility.

The total venture, supported by the DOE’s Office of Science, will be part of the Plasma Science and Technology Department at PPPL that physicist Philip Efthimion heads. “We’ll be offering our diagnostic and computer modeling tools to the research community and the private sector,” Efthimion said. “This will provide new opportunities to collaborate between the community and the private sector and to expand our research on low-temperature plasmas.”

PPPL, on Princeton University's Forrestal Campus in Plainsboro, New Jersey, is devoted to creating new knowledge about the physics of plasmas — ultra-hot, charged gases — and to developing practical solutions for the creation of fusion energy. PPPL is managed by the University for the U.S. Department of Energy’s Office of Science, which is the single largest supporter of basic research in the physical sciences in the United States and is working to address some of the most pressing challenges of our time.

PPPL receives $4.3 million to increase understanding of the role that plasma plays in synthesizing nanoparticles