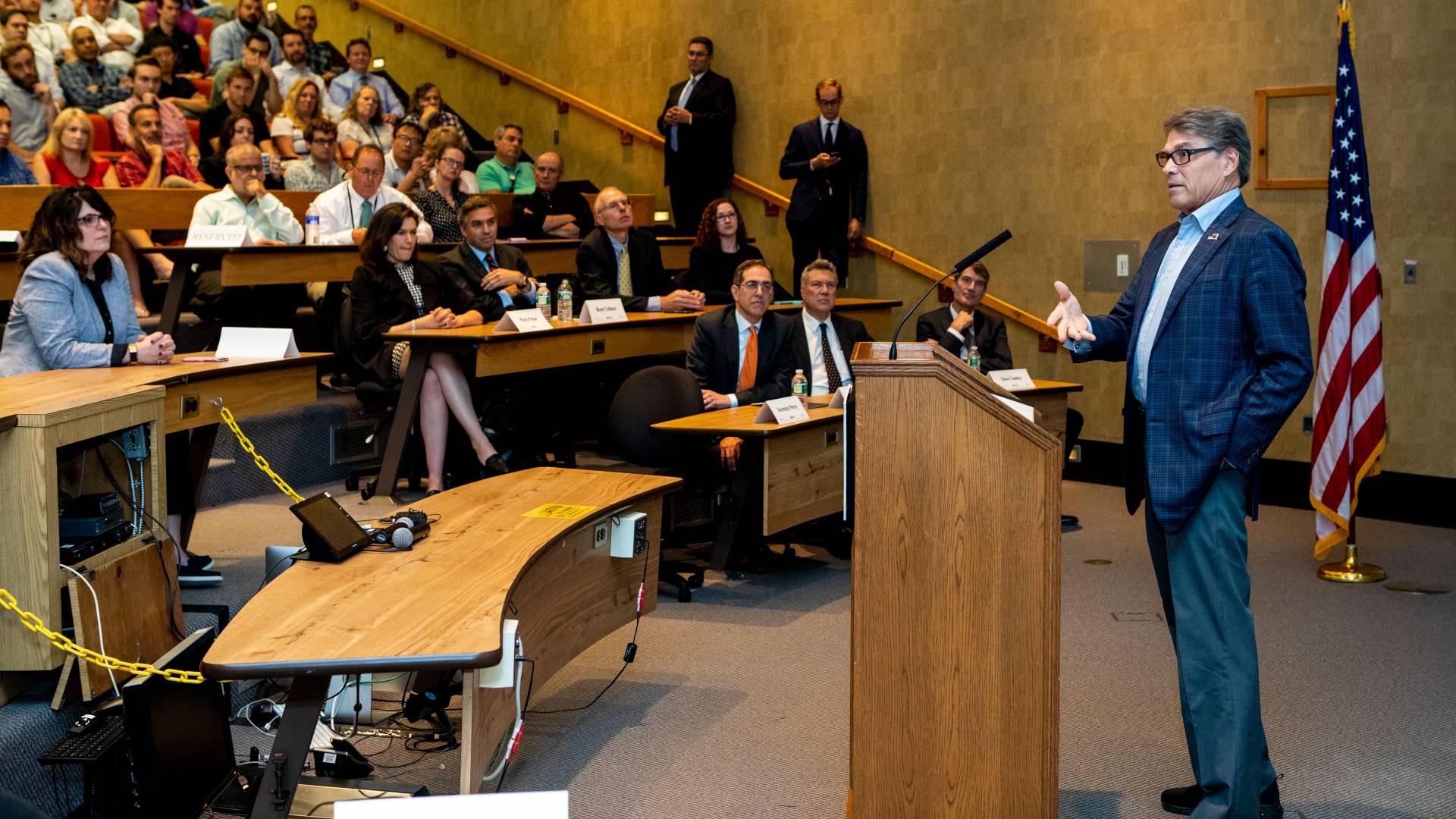 U.S. Department of Energy Secretary Rick Perry speaks to staff at the Princeton Plasma Physics Laboratory (PPPL) during a visit to the lab Thursday, Aug. 9. Perry’s visit was part of his tour of all 17 national laboratories, which he called “amazing jewels” of innovation, development and research.

U.S. Department of Energy Secretary Rick Perry toured the Princeton Plasma Physics Laboratory (PPPL) Thursday, Aug. 9, saying that national labs like PPPL have the potential to change the world through their scientific research.

“Fusion is incredibly important not just to this institution, not just to the Department of Energy, but to the world we live in,” Perry said during a meeting with PPPL staff. “If we are able to deliver fusion energy to the world, we can change the world forever.”

PPPL, which is managed by Princeton University, is part of the national laboratory system funded by the Department of Energy (DOE). PPPL is one of 10 national labs in the DOE’s Office of Science, and the only one devoted to fusion and plasma research. PPPL’s vision is to enable “a world powered by safe, clean and plentiful fusion energy while leading discoveries in plasma science and technology.”

Perry’s visit was part of his tour of all 17 of the national laboratories, which he called “amazing jewels” of innovation, development and research. Perry, who previously served as governor of Texas, met with Princeton University President Christopher L. Eisgruber, Vice President for PPPL David McComas and PPPL Director Steven Cowley, among others. 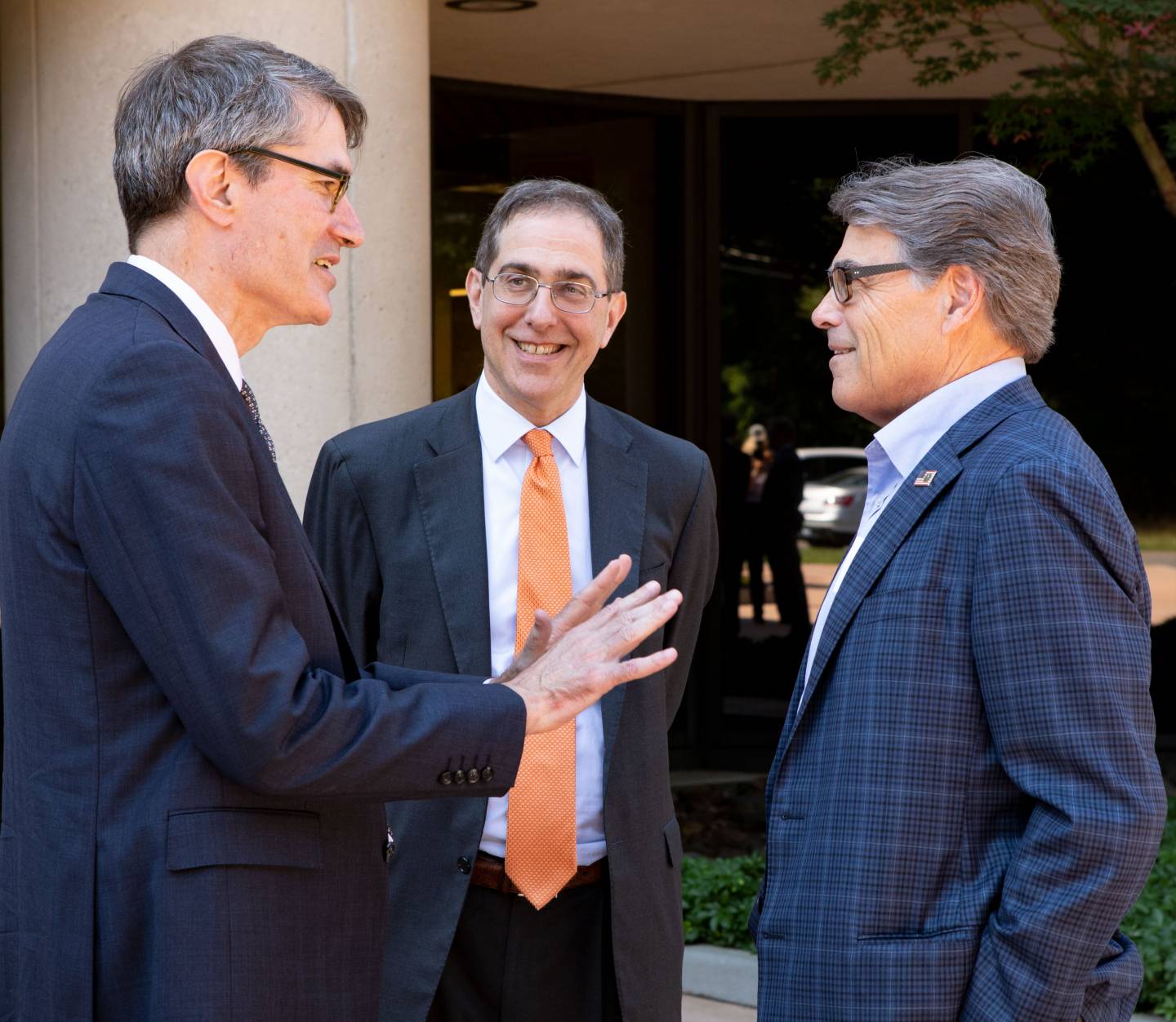 “The relationship between the laboratory and the University is a very important one,” Eisgruber said. “Princeton University has always been a place of innovation. A place where world-class scholars and researchers come together to tackle intellectual and practical problems in novel and innovative ways. We also pride ourselves in a commitment to service. … The cutting-edge science and engineering that takes place at the Princeton Plasma Physics Laboratory lives at the intersection of innovation and service.”

PPPL is devoted to creating new knowledge about the physics of plasmas — ultra-hot, charged gases — and to developing practical solutions for the creation of fusion energy. Fusion energy could provide society with clean, safe and abundant energy. It also could greatly reduce or eliminate the need to burn fossil fuels or manage nuclear waste, as well as curtail the accumulation of greenhouse gases in Earth’s atmosphere.

While at the lab, Perry toured the National Spherical Torus Experiment-Upgrade (NSTX-U) test cell. The goal of NSTX-U when operating at full parameters is to produce high-performance plasmas hotter than the core of the sun to explore the use of fusion power for humankind. Perry talked with the scientists working on the NSTX-U project, including engineers evaluating prototypes for the magnetic coils integral to the project’s spherical tokamak device.

“Cracking the code on fusion could change the energy future of the world, and Princeton is proud to be the Department of Energy’s partner in that endeavor,” Eisgruber said during his remarks to PPPL staff. “I had the chance to meet with Secretary Perry earlier today and I could say without a doubt that he shares our commitment to innovation, to service, and importantly, to fusion. … We are grateful to Secretary Perry and his team for their partnership to ensure that PPPL is positioned to lead the way on fusion energy research for the nation and the world.”

The event also highlighted the practical and commercial applications of PPPL’s research, which includes advanced computing, materials science, electronics and other fields. 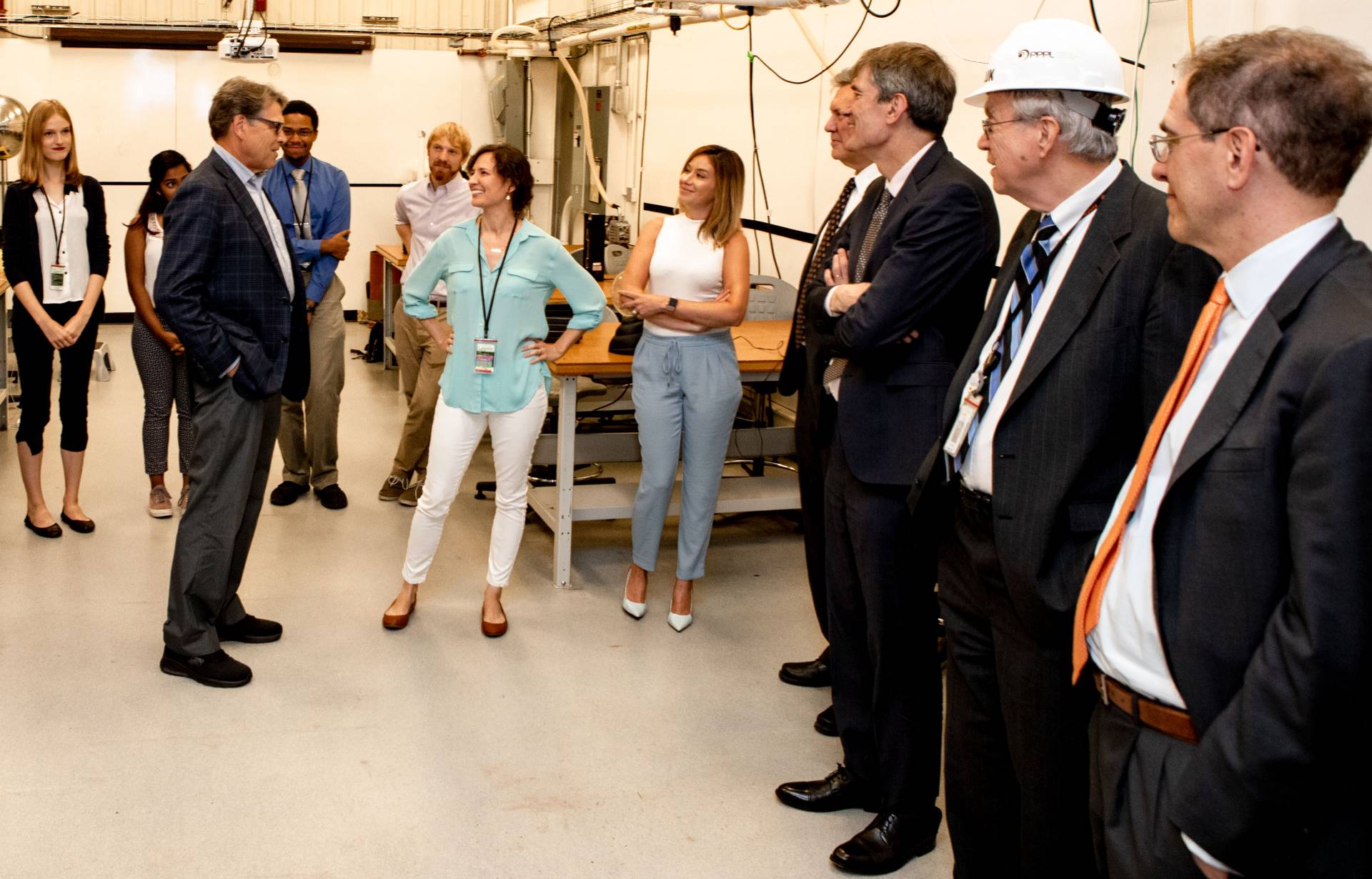 “The Plasma Physics Laboratory has an important role to play as we work with partners throughout this state to cultivate a vibrant innovation ecosystem with the potential to generate transformative ideas, benefit the regional economy and attract top talent,” Eisgruber said.

Cowley, who began as the new director of PPPL this summer, said Perry’s remark that secretary of energy is the “coolest” job he’s had surely was an endorsement of the lab and its cutting-edge research. Cowley, a theoretical physicist and international authority on fusion energy who received his doctorate at Princeton, was previously chief executive officer of the United Kingdom Atomic Energy Authority (UKAEA) and head of the Culham Centre for Fusion Energy.

Perry finished his tour at the PPPL Science Education Department. Shannon Greco, program leader in science education, talked about the success of PPPL’s programs for middle and high school, college, and graduate students interested in science, technology, engineering and math (STEM). She also introduced Perry to some students interning at the lab this summer. 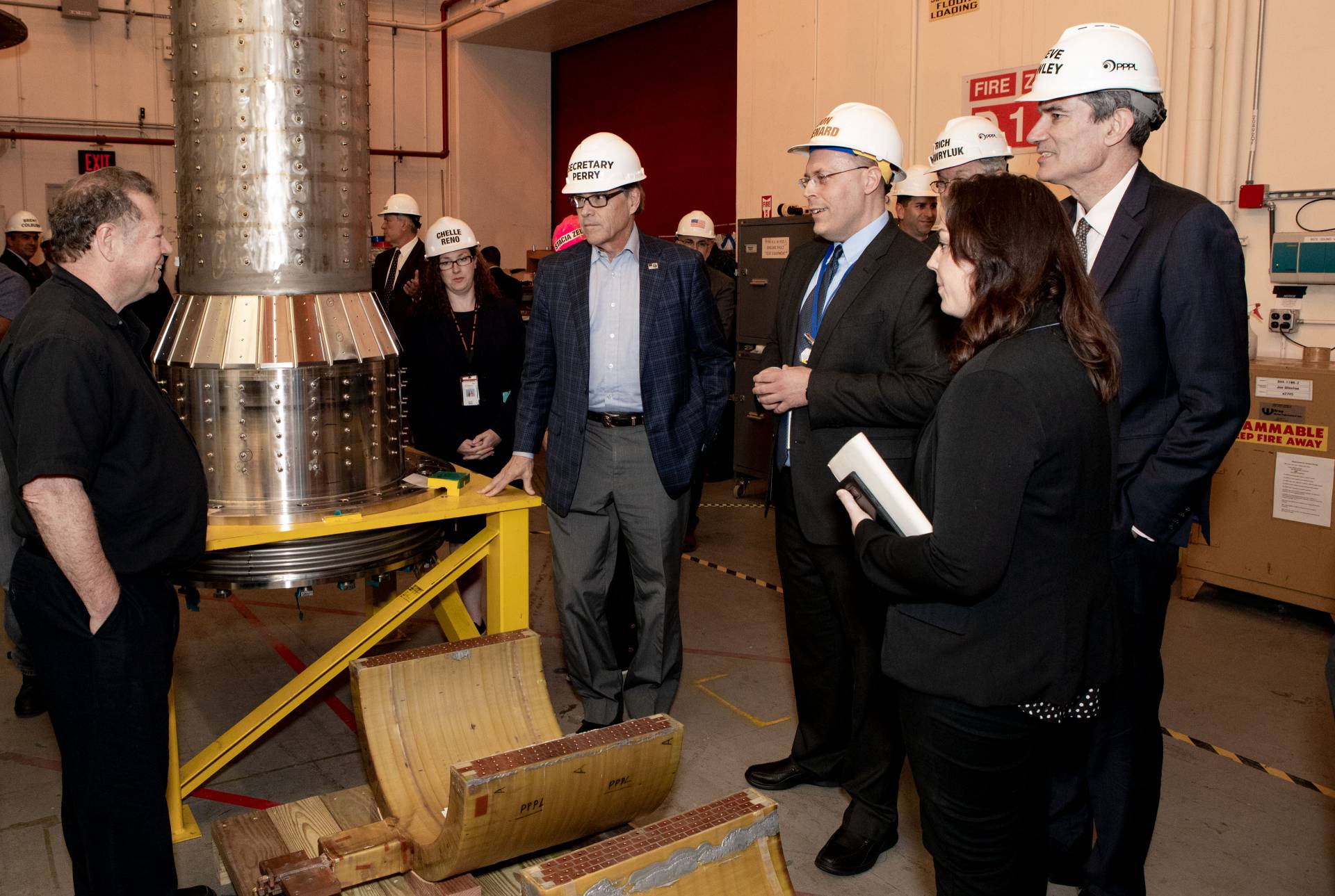 Physicist Arturo Dominguez, senior program leader in science education, gave Perry a hands-on demonstration of a Remote Glow Discharge Experiment, which allows students to manipulate a plasma inside a glass tube device from any computer, smartphone, tablet or other device.

Perry said he was deeply impressed with PPPL’s work inspiring the next generation of scientists.

“If we get the hooks into these young people early on, and get them into that [STEM] pipeline, and then support them after they get their graduate and post-graduate degrees and make sure we keep them in that pipeline, then the future is ours,” Perry said.

As Perry concluded his remarks, he elaborated on his earlier thought about being secretary of energy.

“The best job I will ever have in my life was being the governor of Texas,” Perry said. “But the coolest job I’ve ever had is this one. And it’s because of these national labs. You are part of an amazing infrastructure in this country.” 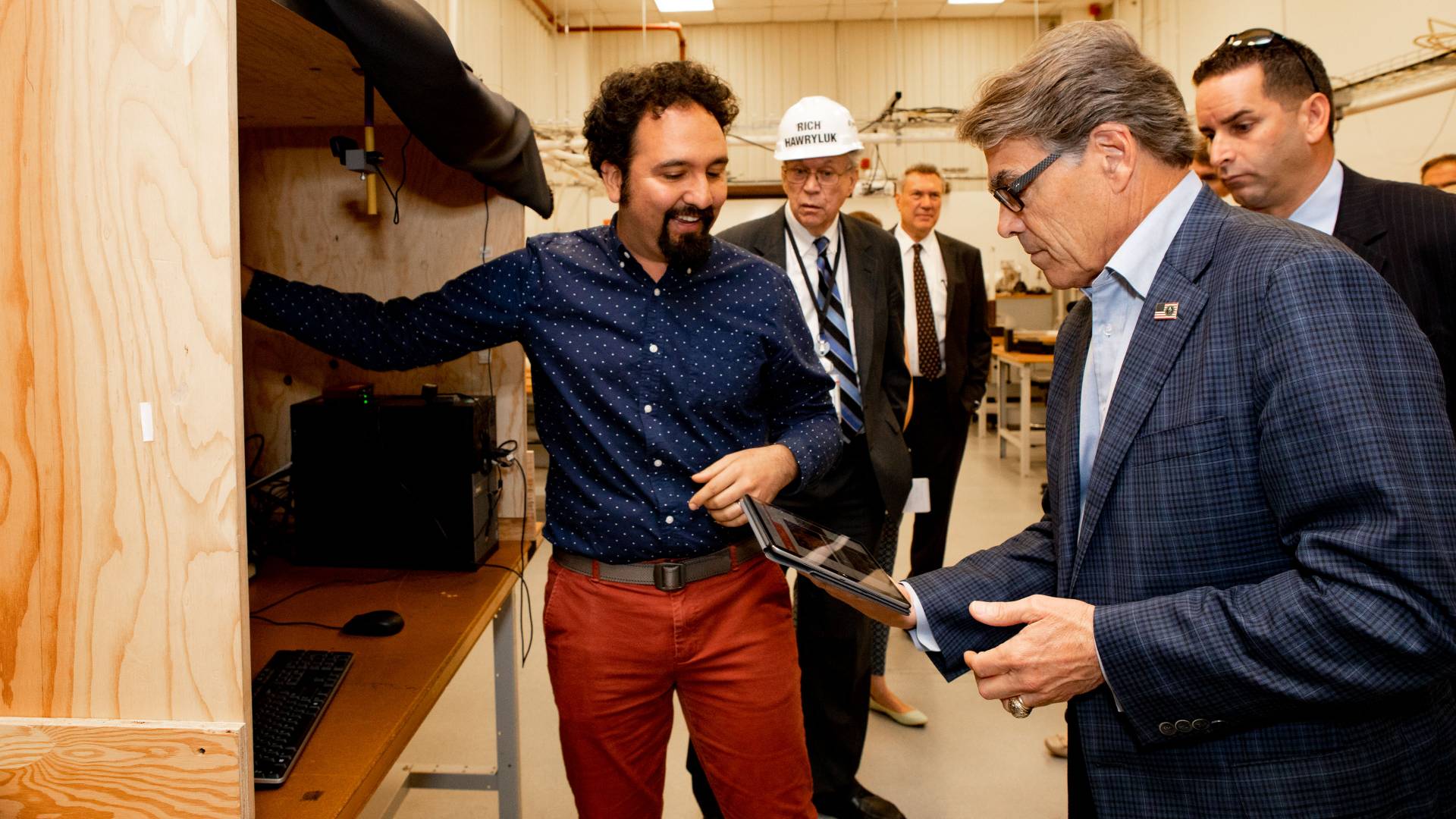 The Princeton Plasma Physics Laboratory is located on Princeton’s Forrestal Campus. Princeton University has managed PPPL since its origins in 1951, when Professor Lyman Spitzer, a founder of the field of plasma physics, initiated the study of fusion at the University.