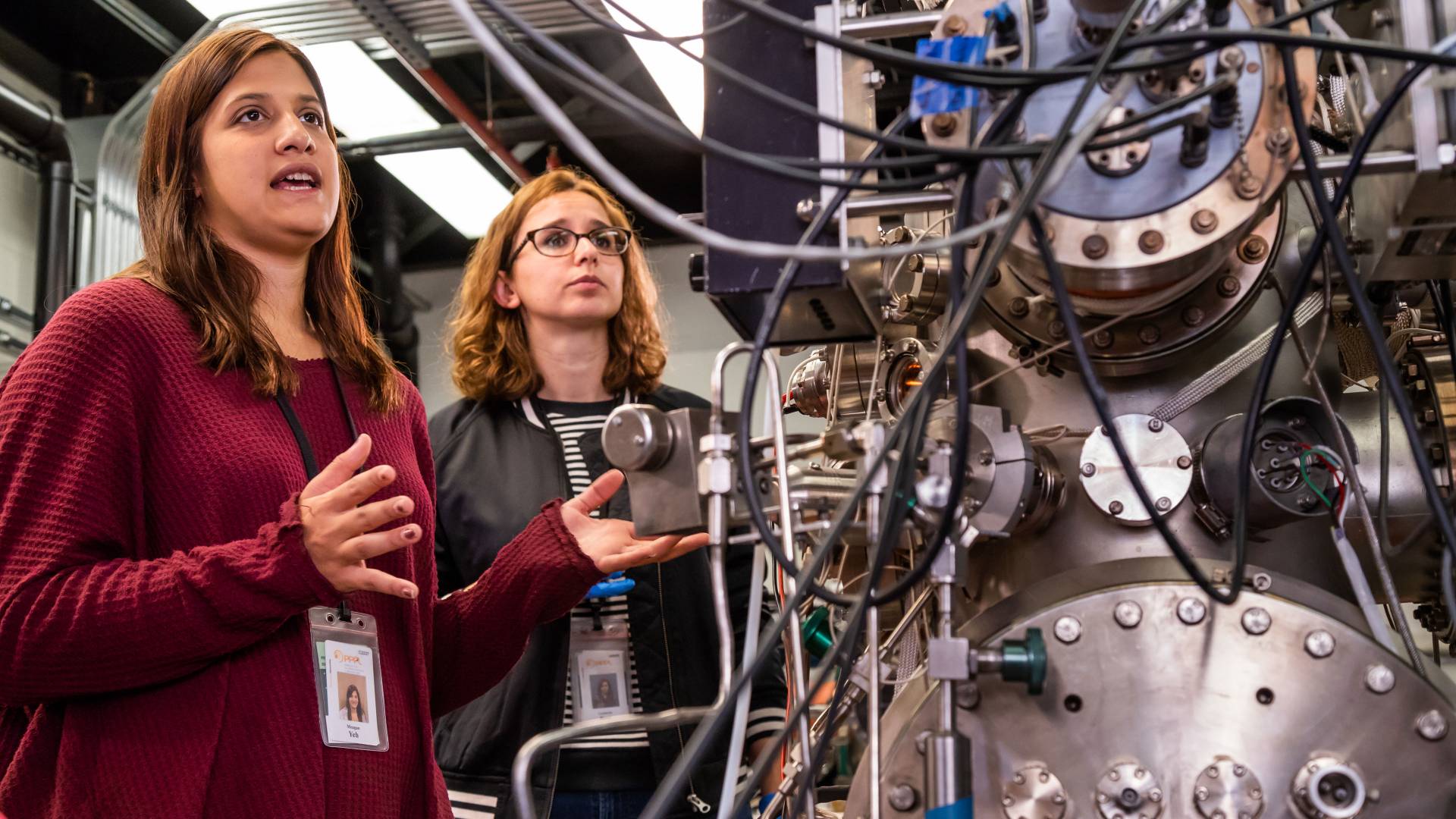 For her senior thesis, Meagan Yeh, left, a chemical and biological engineering major, worked with Luxherta Buzi, right, a postdoctoral researcher, and Professor Bruce Koel to test material for possible use in a fusion reactor.

Before engineers can build a reactor to produce electricity from fusion, they have to make the reactor’s walls able to withstand the heat and energetic particles from the reactions. It is a hellish environment and requires a very special material.

Koel, who conducts research at the University and the Princeton Plasma Physics Laboratory (PPPL), has spent decades studying the surfaces of materials. Recently, he’s been investigating the materials science needed for fusion energy. Last year, he asked one of his undergraduate students — Meagan Yeh — to examine a new approach, and she undertook the effort as part of her senior thesis project.

The method involves working with a special type of the metal tungsten. Yeh, who is majoring in chemical and biological engineering, had spent the previous summer working at PPPL, a U.S. Department of Energy lab operated by Princeton, with Koel and Samuel Cohen, the director of the lab’s program in plasma science and technology.

The study Koel and a colleague were proposing required adapting lab instruments to bombard tungsten samples with a plasma beam and then analyze the results. The dime-sized samples of the “nano-grained” tungsten for the research were supplied by Jason Trelewicz, an assistant professor of materials science and engineering at the State University of New York at Stony Brook.

Yeh, who is from Chicago, said she was immediately interested. The material is a rare formulation of tungsten that has promising properties. The proposal “was exciting,” she said. “It was challenging. It was intimidating.”

Koel asked Yeh to work with Luxherta Buzi, a postdoctoral research associate, on the project. Buzi had developed expertise in tungsten while working toward her doctorate at Jülich Research Center in Germany.

“The project was pending, and we thought it would be ideal for Meagan,” Buzi said, adding that Yeh’s contribution would move the project forward much faster than the research team could proceed without her. 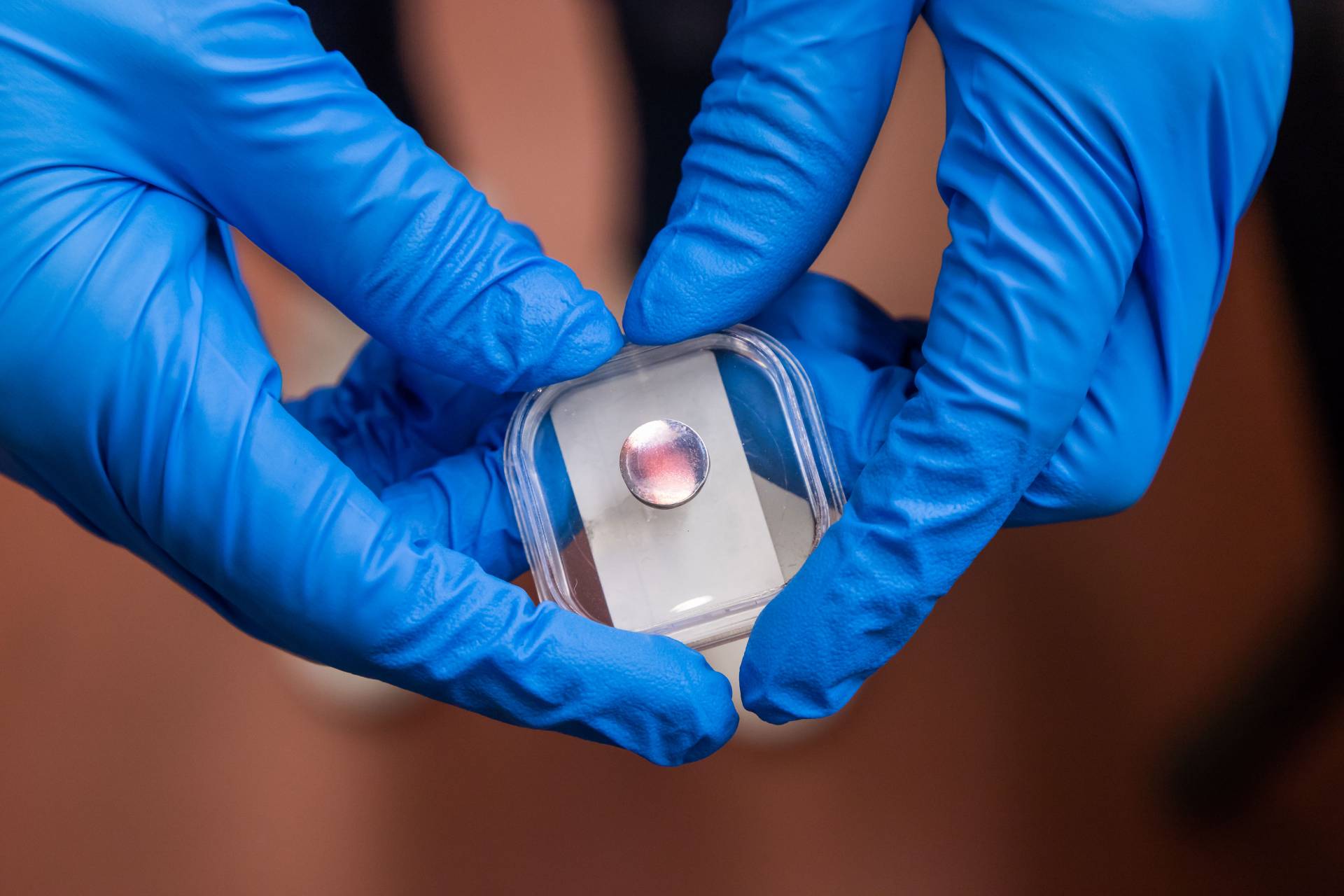 Tungsten, which has the highest melting point of any element, is one candidate for use in construction of fusion reactors.

In nuclear fusion, enormous amounts of energy are released when two light atoms such as hydrogen isotopes are fused to make one slightly heavier atom such as helium. It may be possible for fusion to be much safer and more sustainable than nuclear fission, which is used in nuclear power today and involves splitting heavy atoms such as uranium into lighter but highly radioactive atoms. One proposed method for building a fusion plant involves fusion reactions in superheated plasma that has been confined in magnetic fields. Plasma is an ionized gas, meaning it is made up of positively charged ions and negatively charged electrons.

Engineers have to overcome a number of challenges before being able to establish a commercial fusion plant. For one, they have to create a section of the reactor designed to withstand high heat and particle bombardment from the reactions. To make this section, called a divertor, engineers have to develop a material tough enough to take the punishment.

Tungsten, used in razor blades and high-performance turbines, seems like a promising candidate for use on parts of the divertor that face the plasma. Tungsten is extremely hard and dense and has the highest melting point of any element. The material has to perform nearly perfectly; even microscopic amounts of eroded material entering the plasma could hinder the fusion taking place inside.

“One solution is you make the divertor out of material that is very refractory and strong — you make it out of tungsten,” Koel said. “But tungsten has several problems.”

One significant problem involves particles — hydrogen isotopes and helium — that come blasting from the fusion reactions. Scientists create those reactions by confining plasma within strong magnetic fields and then heating it to high temperatures. The fields are effective at holding the plasma, but many particles escape, strike the reactor’s walls and are trapped inside the material. That is especially true for the divertor.

The researchers wanted to know if their special tungsten samples could provide a solution. All tungsten is made up of tiny crystals, and the borders between these crystals are known as grain boundaries. In nano-grained tungsten, the crystals are much smaller than in the standard polycrystalline material, and therefore there are many more grain boundaries. The researchers believe these boundaries could create a way for the particles to escape before accumulating and causing further damage to the tungsten. To test this, they planned to irradiate tungsten with deuterium and helium plasma at various surface temperatures, simulating the conditions in a fusion reactor, and see whether the nano grains would help mitigate the effects of trapped particles.

Buzi suggested the team conduct the experiment at the University of California-San Diego, where she had spent time during her doctoral work. Their linear plasma device, called PISCES-A, would offer an especially accurate simulation, if available.

Buzi called one of her former colleagues, Russ Doerner. “He told me they had a window of a few weeks before it got really busy for a conference,” Buzi said. “Luckily, it was over Princeton’s winter break.” 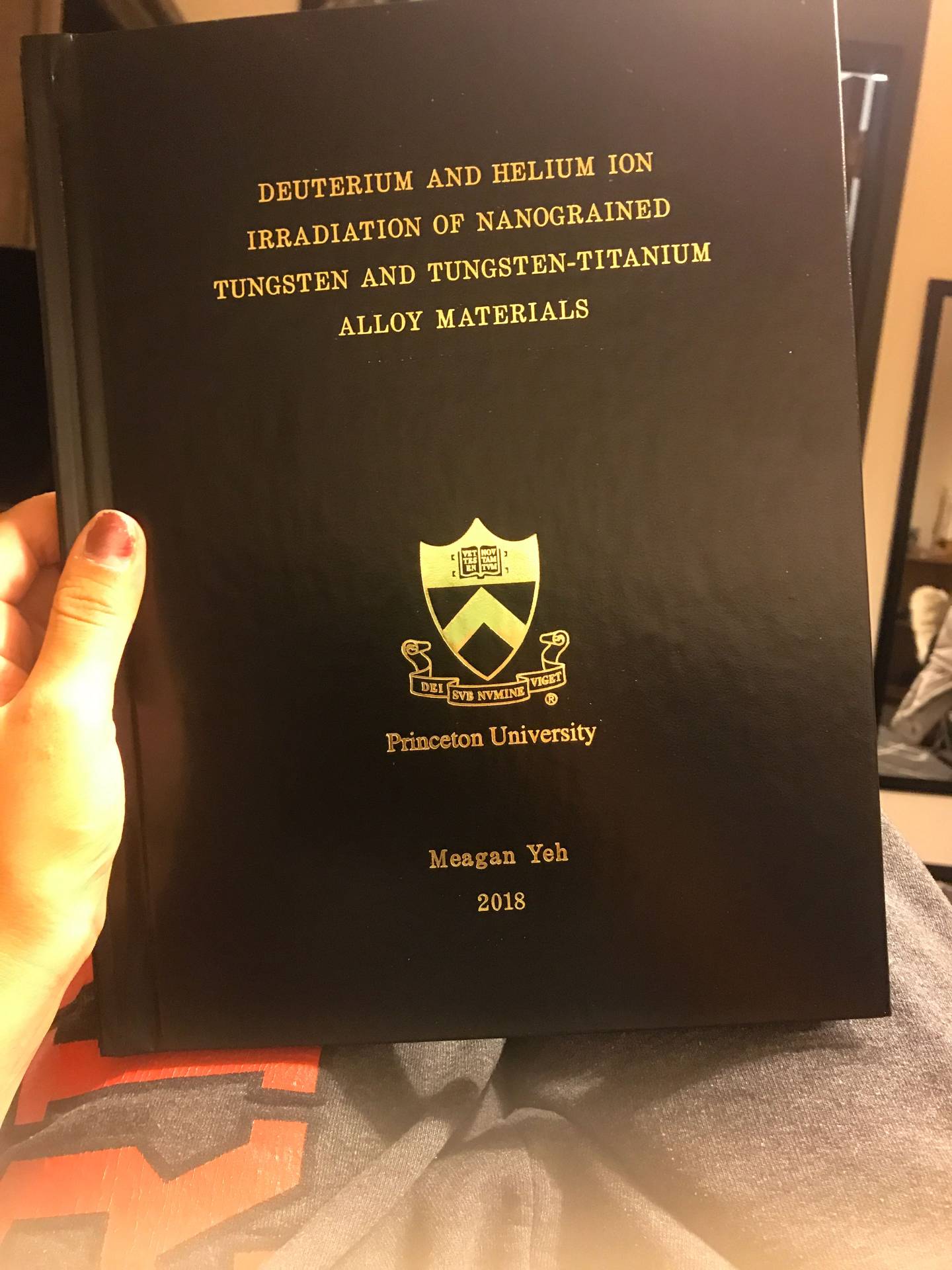 With a sense of accomplishment, Yeh took this photo of her bound senior thesis and sent it to friends.

Doerner said they could have two weeks on the device. Working double shifts, they were able to finish in one week. The quick work provided the researchers with an opportunity to perform more tests. They spent the following week heating the sample to 1,000 degrees Celsius in a vacuum chamber and measuring the amount of deuterium and helium trapped in the tungsten.

“It was very successful, the machine worked fine, everything went as planned,” Buzi said.

The pair still had a big job to do: On returning to Princeton they needed to analyze their samples at a scale too small to see with conventional microscopes. The Princeton Institute for the Science and Technology of Materials (PRISM) was their next stop.

“There are not many places where you can find the type of equipment or the experts [that] they have at PRISM,” Yeh said.

The researchers are pleased with the results. Koel said he expects that they will eventually produce journal articles, which will include Meagan Yeh as a co-author.

“They are important results for fusion applications,” he said. “They open the door for more research.”

Yeh, who is scheduled to work in research and development for Kraft Heinz after graduation, said the thesis was an unforgettable part of her time at Princeton.

“When it was finished, I took a picture of the cover and sent it to my friends,” she said.