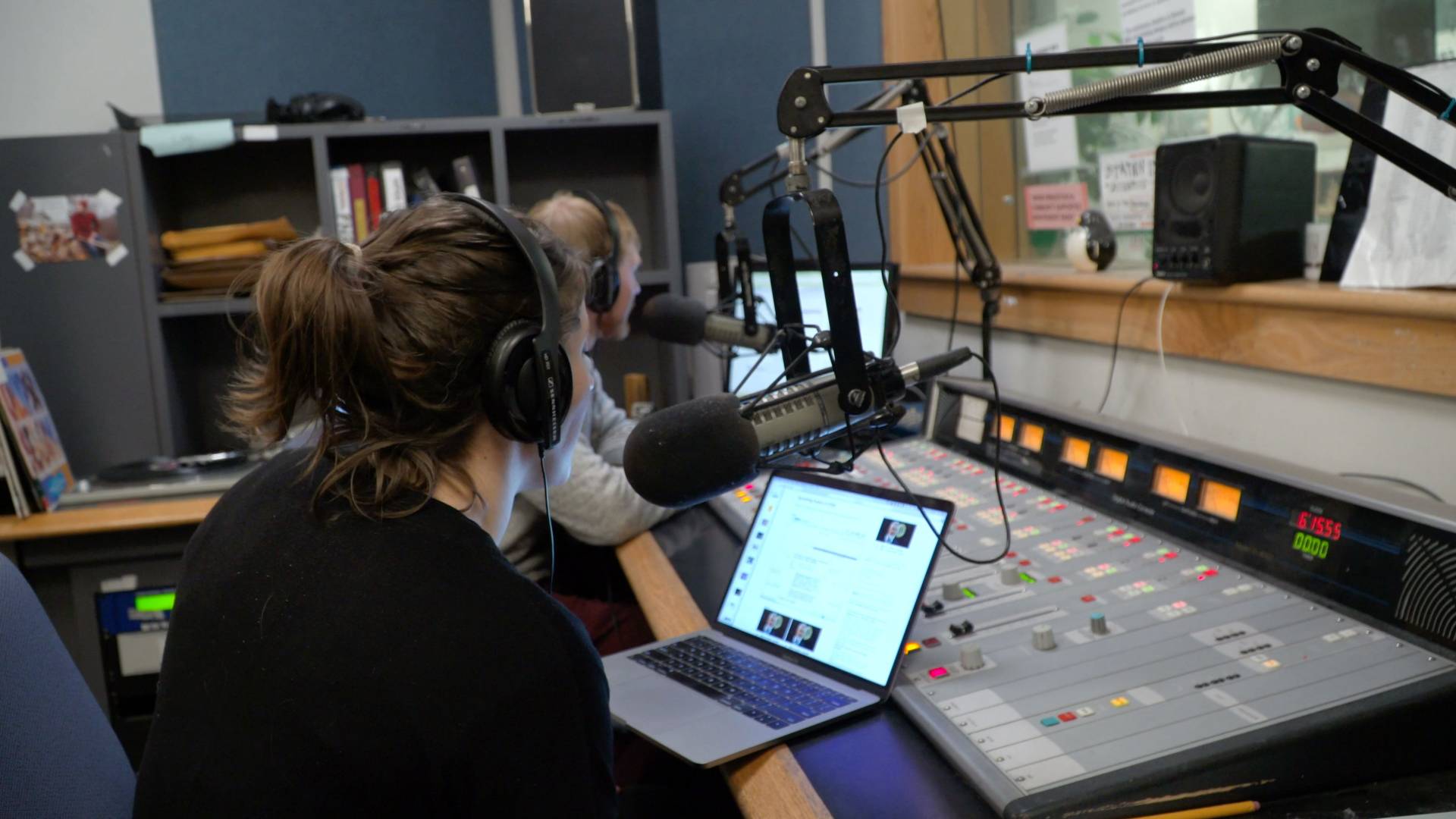 Graduate students Stevie Bergman and Brian Kraus host "These Vibes Are Too Cosmic," a talk radio program where experts share cutting-edge science research with listeners on and off campus, every Tuesday evening.

At the unlikely intersection of talk radio, modern music and the Princeton graduate physics program is “These Vibes Are Too Cosmic,” a radio show bringing cutting-edge science research and groovy tunes to your dial every Tuesday at 6 p.m.

“Our show is about trying to get the science research that happens within Princeton — often behind closed doors on someone's computer or in someone's lab — and spread it out to the public,” said Brian Kraus, one of the show’s two hosts. “Radio is such an intimate medium. [When] you're laughing together on the air, and you're talking really casually about the research, I think it gives people a totally different perspective than they normally get on what scientists are doing.”

“Our best interviews are ones where we connect with our guest and our guest connects with the audience,” said fellow host Stevie Bergman. “They are laughing, and they are getting excited about what they do, because this is what they spend every day on, and they're so passionate about it. And if we can bring that out and show that to our audience, that is wonderful.”

Airing on WPRB 103.3 FM, the not-for-profit radio station at Princeton University, the show provides a platform for scientists, authors, artists and more. “It almost always has a science bent, but I think what people underestimate is how many things have a science bent,” said Bergman. “If you think critically, if you're talking about the world around you, imagining other worlds … it has a science bent.”

Some of their favorite and most frequent guests include Ed Felten, the Robert E. Kahn Professor of Computer Science and Public Affairs; Ingrid Ockert, who completed her Ph.D. in 2018 in the history of science; and the Princeton Laptop Orchestra (PLOrk).

Kraus and Bergman see their role as helping the experts translate their work to a general audience. They don’t know the precise makeup of their audience — one difference between radio and podcasting is that there’s no way of tracking live radio listeners, unless they call into the show — but they’ve gotten phone calls from non-scientists, journalists, citizen scientists, experts and politicians.

Bergman and Kraus, graduate students in physics and plasma physics respectively, met while studying for their physics preliminary exams, which they describe as a “hazing ritual” at the end of their first semester. Bergman was already working on “These Vibes Are Too Cosmic” — which got its name from a science outreach blog she had created in 2010 — that aired between 2 and 4 a.m. with pre-recorded interviews.

“Around that time, Brian just kind of casually mentioned, ‘I would love to start on the radio show as well, and I want to do science outreach programs as well,’” Bergman recalled. She leapt at the chance to share the workload, and they jointly pitched the idea of doing live interviews, which contributed to their move to primetime: the show now airs 6-8 p.m. Tuesdays.

Their show doesn’t directly feed their own research, but neither host regrets the hours they spend preparing for interviews and putting together music lists. “Science communication is so crucial for every graduate student and every scientist, all across all fields,” Kraus said. “It's totally universal, and most people don't have much practice with it.”

They also appreciate the broader perspective that the show provides. “As a graduate student and as a scientist, as you go along in your career, you become more and more and more focused, and it becomes harder and harder to see the forest for the trees,” said Bergman. “Doing the radio show, I am at least once a week brought out of that forest.”

Their radio show became a podcast a few years ago, when the Council on Science and Technology hired David Exume of the Class of 2019 to edit out copyrighted material and upload the rest to SoundCloud.

Meet your hosts: Brian and Stevie

When Bergman is not in the recording studio, she works in the lab of William Jones, an assistant professor of physics, on the SPIDER collaboration. SPIDER — which used to be an acronym and is now the project’s name — is a balloon-borne spacecraft studying the origins of the universe. The first SPIDER instrument floated across Antarctica from Jan. 1-17, 2015, mapping the cosmic microwave background. Bergman is working on SPIDER2, slated to launch in December 2019. 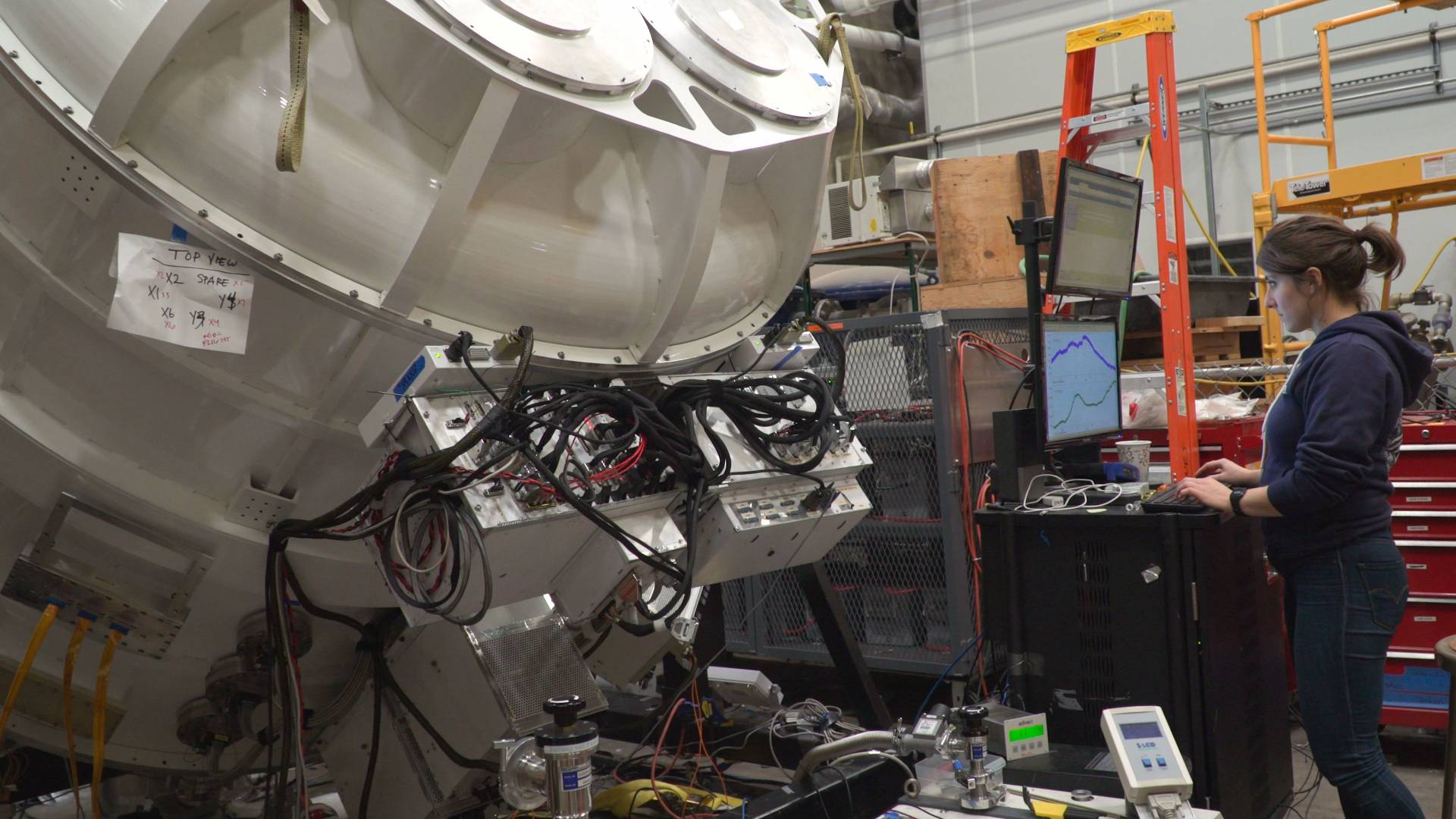 Physics graduate student and Vibes co-host Stevie Bergman checks the instrument monitoring system of the cryostat (left), which cools the six telescopes of the SPIDER instrument — a spacecraft for studying the origins of the universe. The sensors measure the pressure, flow and temperature within the cryostat.

Bergman said she chose to work with Jones during her first visit to campus, when she saw the eager buzz of activity in his lab. “Everyone from the undergraduates working in the lab to the professor himself were all … extremely engaged in the role of getting the telescope together,” she said.

To prepare for the SPIDER2 launch, Bergman is focused on the cryostat, which holds the six telescopes searching for 14-billion-year-old light. “I have actually had my hands on almost every part of this instrument,” she said. “All the different pieces of this instrument need to fit together [and] work together as well as possible. I work very closely with people in my lab, and I work very closely with people at labs across the world, to have this whole instrument be integrated as seamlessly as possible.”

Bergman and Kraus are involved with Princeton Citizen Scientists and other science communication projects. Bergman has also worked as an assistant in instruction for Physics 101 and a math tutor at Garden State Prison with the Prison Teaching Initiative, and she is a member of the Women in Physics graduate student group. 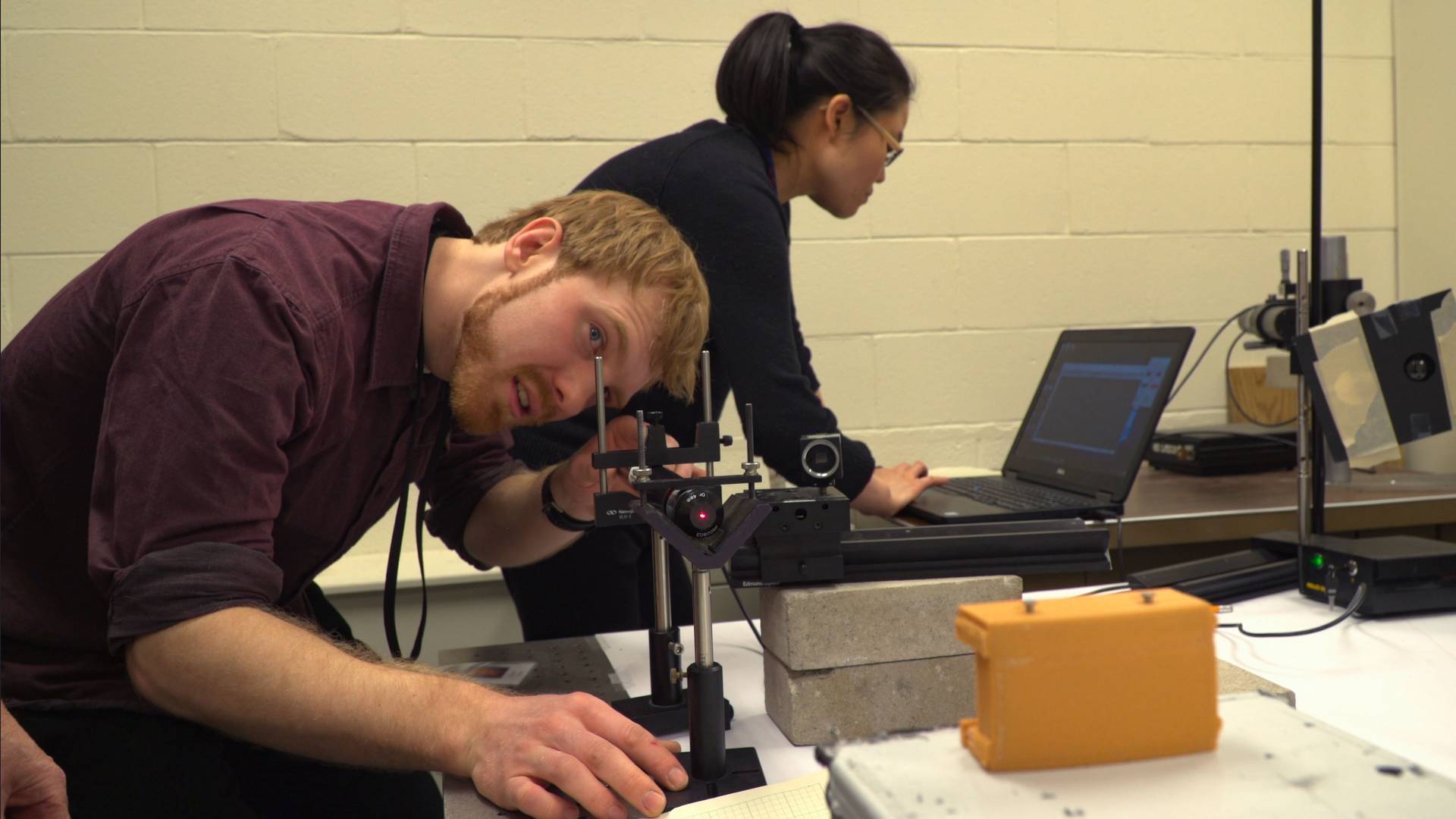 Kraus, who works at the Princeton Plasma Physics Laboratory (PPPL), gives tours of the lab and is the PPPL representative to the Graduate Student Government. The plasma physics program encourages graduate students to work in a series of labs, so Kraus has worked on plasma-based propulsion systems for spacecraft, calculated the effects of containing plasma in a fusion device, and is now engineering crystals that can detect X-rays from plasma that is held by lasers instead of magnets.

Similar techniques have been used for decades on tokamaks, the donut-shaped devices — like the giant one at PPPL — that use a very strong magnetic field to contain plasma, but confining plasma with lasers changes the game, Kraus said. “When you do this, you get temperatures that are about the same, tens of millions of degrees, but the densities are 10 orders of magnitude higher — like 10 billion times higher than in a tokamak — so everything happens much, much faster,” he said.

As they near the end of their time at Princeton, Bergman and Kraus hope to find other graduate students to pass the torch on to, to continue the vital work of communicating science.

“If we can help people look around the world and think about the way the universe is working — from the cameras to the atoms in a table, from the way their car is working, from trees, all of this stuff — then I think we've done our job,” Bergman said.