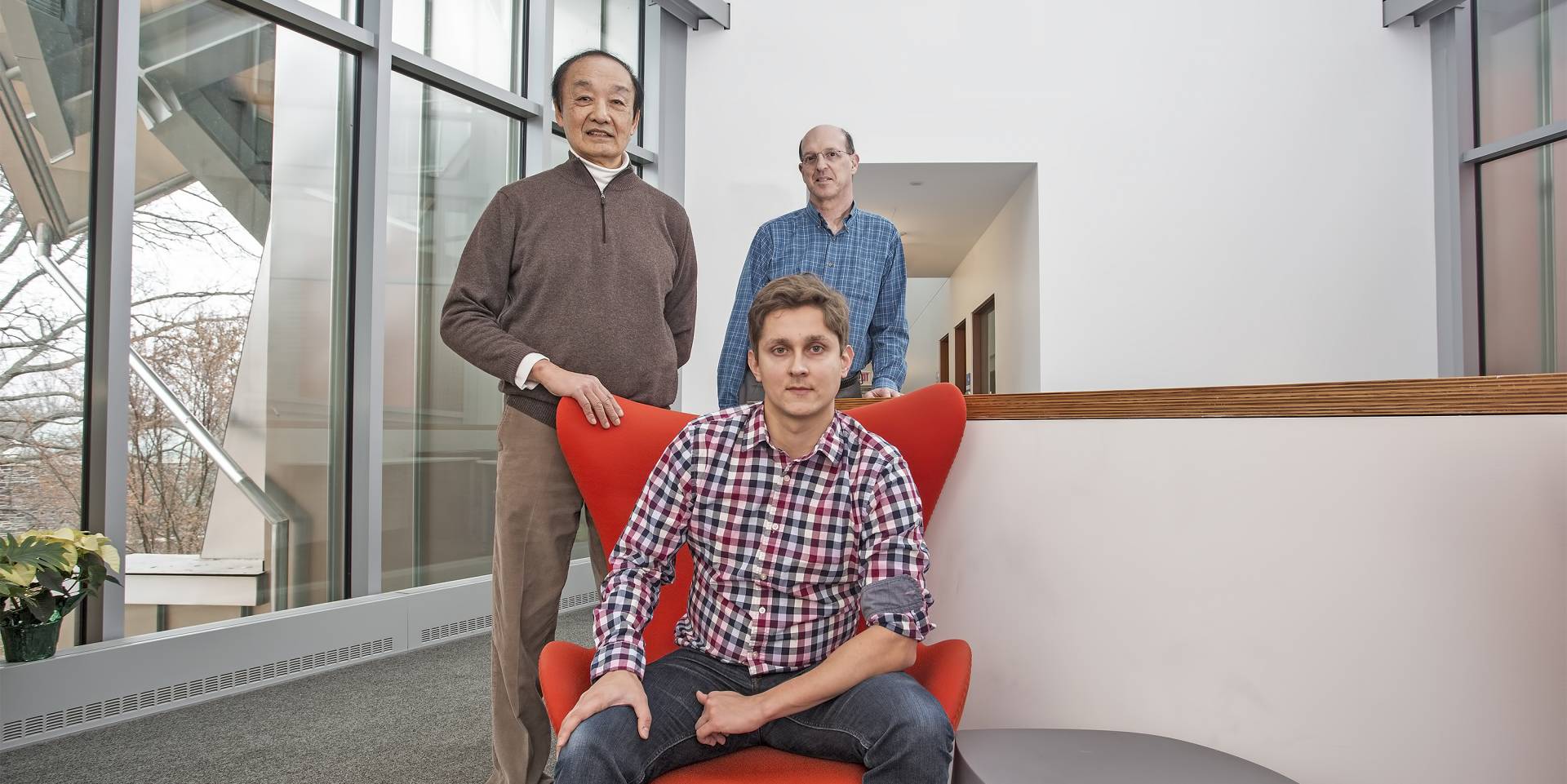 Before scientists can effectively capture and deploy fusion energy, they must learn to predict major disruptions that can halt fusion reactions and damage the walls of doughnut-shaped fusion devices called tokamaks. Researchers at the U.S. Department of Energy’s Princeton Plasma Physics Laboratory (PPPL) and Princeton University are employing artificial intelligence to improve predictive capability. Deep learning developers involved in this work include, standing from left, Willliam Tang and Eliot Feibush, with Alexey Svyatkovskiy, seated.

Before scientists can effectively capture and deploy fusion energy, they must learn to predict major disruptions that can halt fusion reactions and damage the walls of doughnut-shaped fusion devices called tokamaks. Timely prediction of disruptions, the sudden loss of control of the hot, charged plasma that fuels the reactions, will be vital to triggering steps to avoid or mitigate such large-scale events.

Today, researchers at the U.S. Department of Energy’s (DOE) Princeton Plasma Physics Laboratory (PPPL) and Princeton University are employing artificial intelligence to improve predictive capability. Researchers led by William Tang, a PPPL physicist and a lecturer with the rank of professor in astrophysical sciences at Princeton, are developing the code for predictions for ITER, the international experiment under construction in France to demonstrate the practicality of fusion energy.

FRNN is a deep-learning architecture that has proven to be the best way to analyze sequential data with long-range patterns. Members of the PPPL and Princeton machine-learning team are the first to systematically apply a deep learning approach to the problem of disruption forecasting in tokamak fusion plasmas.

Chief architect of FRNN is Julian Kates-Harbeck, a graduate student at Harvard University and a DOE-Office of Science Computational Science Graduate Fellow. Drawing upon expertise gained while earning a master’s degree in computer science at Stanford University, he has led the building of the FRNN software. 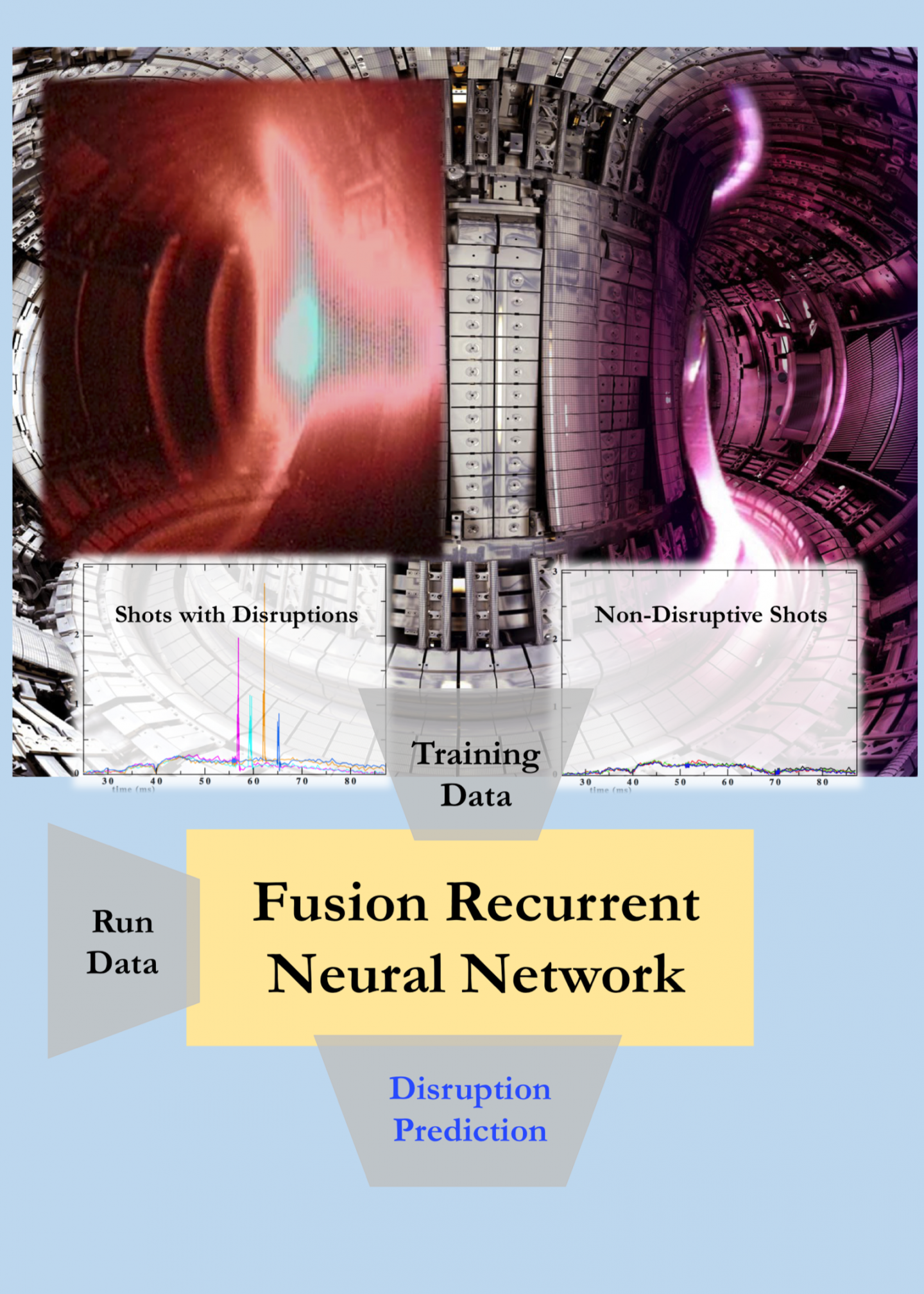 Image of plasma disruption in experiment on JET, left, and disruption-free experiment on JET, right. Training the FRNN neural network to predict disruptions calls for assigning weights to the data flow along the connections between nodes. Data from new experiments is then put through the network, which predicts "disruption" or "non-disruption." The ultimate goal is at least 95 percent correct predictions of disruption events.

Using this approach, the team has demonstrated the ability to predict disruptive events more accurately than previous methods have done. By drawing from the huge data base at the Joint European Torus (JET) facility located in the United Kingdom — the largest and most powerful tokamak in operation — the researchers have significantly improved upon predictions of disruptions and reduced the number of false positive alarms.  EUROfusion, the European Consortium for the Development of Fusion Energy, manages JET research.

The team now aims to reach the challenging goals that ITER will require. These include producing 95 percent correct predictions when disruptions occur, while providing fewer than 3 percent false alarms when there are no disruptions.

“On the test data sets examined, the FRNN has improved the curve for predicting true positives while reducing false positives,” said Eliot Feibush, a computational scientist at PPPL, referring to what is called the “Receiver Operating Characteristic” curve that is commonly used to measure machine learning accuracy. “We are working on bringing in more training data to do even better.”

The process is highly demanding. “Training deep neural networks is a computationally intensive task that requires engagement of high-performance computing hardware,” said Alexey Svyatkovskiy, a big data software and programming analyst in the Princeton Institute for Computational Science and Engineering. “That is why a large part of what we do is developing and distributing new algorithms across many processors to achieve highly efficient parallel computing. Such computing will handle the increasing size of problems drawn from the disruption-relevant data base from JET and other tokamaks.”

Tests performed on modern GPU clusters, and on world-class machines such as Titan, currently the fastest and most powerful U.S. supercomputer at the Oak Ridge Leadership Computing Facility, a DOE Office of Science User Facility at Oak Ridge National Laboratory, have demonstrated excellent linear scaling. Such scaling reduces the computational run time in direct proportion to the number of GPUs used — a major requirement for efficient parallel processing.

Princeton University’s Tiger cluster of modern GPUs was the first to conduct deep learning tests, using FRNN to demonstrate the improved ability to predict fusion disruptions. The code has since run on Titan and other leading supercomputing GPU clusters in the United States, Europe and Asia, and has continued to show excellent scaling with the number of GPUs engaged.

The researchers seek to demonstrate that this powerful predictive software can run on tokamaks around the world and eventually on ITER.

Also planned is enhancement of the speed of disruption analysis for the increasing problem sizes associated with the larger data sets prior to the onset of a disruptive event.

Support for this project has primarily come to date from the Laboratory Directed Research and Development funds that PPPL provides.

PPPL, on Princeton University's Forrestal Campus in Plainsboro, New Jersey, is devoted to creating new knowledge about the physics of plasmas — ultra-hot, charged gases — and to developing practical solutions for the creation of fusion energy. PPPL is managed by Princeton for the U.S. Department of Energy’s Office of Science, which is the largest single supporter of basic research in the physical sciences in the United States, and is working to address some of the most pressing challenges of our time.