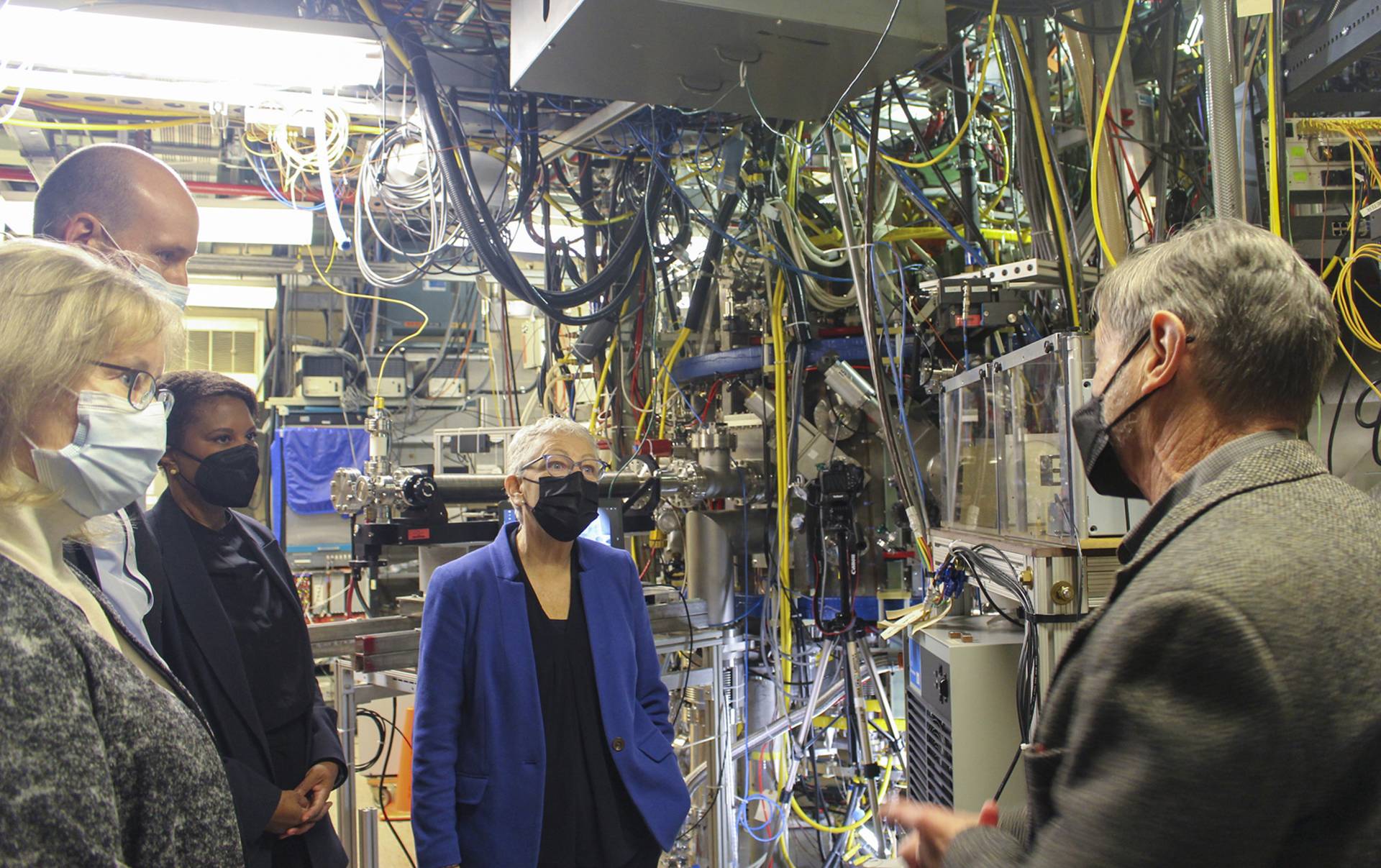 Top White House policy advisors on climate and clean energy, along with leaders of the U.S. Department of Energy, visited the Princeton Plasma Physics Laboratory (PPPL) on Feb. 15 to discuss how to accelerate the development of fusion energy as a carbon-free method to generate safe, clean, and abundant electricity using the same process that powers the sun and the stars.

The development of a fusion energy power plant is considered one of the great scientific and technical challenges facing the world because of its potential to provide nearly limitless, constant electricity with minimal environmental impact. A recent National Academies of Science, Engineering, and Medicine report, chaired by senior PPPL physicist Richard Hawryluk, called for development of a fusion-powered pilot plant by 2040. Discussions at PPPL and elsewhere are centered on what steps would be needed to put energy from fusion on the electrical grid sooner.

The day-long event began with a tour of the experimental facilities, including PPPL’s flagship experiment, the National Spherical Torus Experiment-Upgrade (NSTX-U) that promises a route to a lower cost fusion reactor. The tour also stopped at the Lithium Tokamak Experiment, where scientists are exploring whether liquid lithium walls could help solve a key engineering challenge facing the inner surfaces of a future pilot plant. Another stop on the tour was one of the largest experimental halls in the U.S., which PPPL is proposing to redevelop for future partnerships with private fusion energy companies. As private-sector interest and investment heats up around the potential for a fusion-energy supply chain, PPPL is seeking to aid and assist the national program.

Gina McCarthy, the White House national climate advisor, said the visit to PPPL was aimed at getting senior policy advisors a “sense of the excitement around fusion energy research” and to learn about the next steps in making it a reality. “It’s been a fascinating tour,” she said. “It’s exciting to see how much the U.S. is really involved in technologies of the future. To me, the sooner we can make new types of energy happen, the better, not just for the planet but for the people who live on this planet. It’s amazing to see what is happening here.”

PPPL Director Steven Cowley, who led the tour and discussions, said, “It is clear that the potential of fusion to help us reach zero carbon emissions is appreciated by this administration. Today’s talks will help us accelerate the delivery of the first fusion electricity.”

Fusion energy is produced when two light atoms, such as hydrogen, combine to form a heavier element and the process releases excess energy that is converted into electricity. Fusion occurs in the core of stars like our sun, or in machines on Earth that produce the conditions necessary to heat and confine the ionized gas, known as a plasma, so that the ions fuse together and the excess energy produced is converted into electricity.

In a future fusion pilot plant, two gases, deuterium and tritium, isotopes of hydrogen, would be injected into a vacuum vessel, heated to many times hotter than the center of sun, and confined by powerful magnetic fields.

PPPL’s Tokamak Fusion Test Reactor set a world record in the early 1990s when it used this gas mixture to produce significant power from fusion for a fraction of a second. This month, a new world record was achieved on the Joint European Torus, a fusion experiment in the United Kingdom that created the highest sustained energy pulse for more than 5 seconds. The results, supported by scientists around the world, including at PPPL, will prepare for future pilot plants and for the operation of ITER, the international fusion experiment in Cadarache, France, that will use the same fuel.

David Turk, the deputy secretary of the U.S. Department of Energy (DOE) said he particularly enjoyed seeing PPPL’s experiments and meeting staff in person. “It’s really great, ground-breaking stuff, so it’s an honor just to be here,” he said. “PPPL is just a gem. It’s great to know you have researchers in the country doing cutting-edge technology that could literally help save our planet. It’s just inspiring to work with people who do that work.”

PPPL’s primary research is centered on the NSTX-U, which is studying whether changing the shape of the device can lead to a smaller and more efficient pilot plant. NSTX-U is a type of “spherical tokamak,” shaped more like a cored apple than a traditional doughnut-shaped magnetic confinement device, and it can produce high-pressure plasmas with relatively low magnetic fields. This means a spherical tokamak could be a more compact and affordable model for future fusion energy power plants.

Sally Benson, deputy director for energy and chief strategist for the energy transition at the White House Office of Science and Technology Policy (OSTP), said she was excited to see PPPL firsthand. “It’s important to see the Laboratory where we’re doing the important foundational research that's going to power the fusion industry in the U.S. and in the world,” she said. “Fusion has a lot of things going for it. It’s clean and it’s plentiful. It’s going to play an important role in establishing the U.S. as a leader in so many important alternative technologies that are the future of clean energy.”