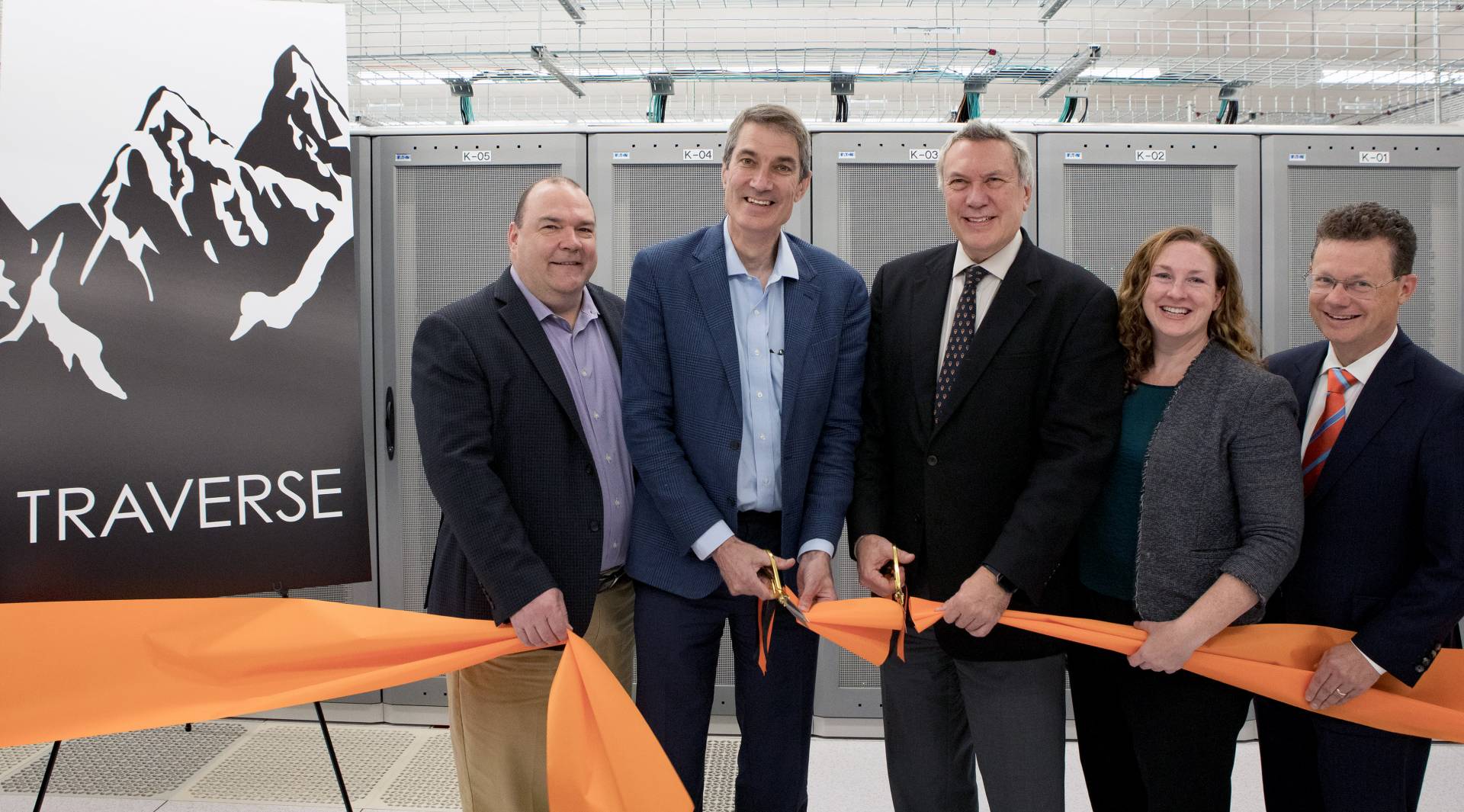 A ribbon-cutting ceremony in Princeton’s High-Performance Computing Research Center on Sept. 30 kicked off the University’s official launch of its newest supercomputer, called Traverse, which joins four other distinct computing clusters available to the University research community.

“We are delighted to unveil Traverse, our new Department of Energy (DOE) ‘Leadership Class’ compatible computing cluster,” said David McComas, vice president for the Princeton Plasma Physics Laboratory (PPPL) and professor of astrophysical sciences. “This is an important milestone in Princeton University’s increased collaboration with the DOE in support of basic plasma physics and the U.S. fusion energy mission.”

Traverse is a 1.4 petaflop High-Performance Computing (HPC) cluster that shares the same Graphics Processing Unit (GPU) and Central Processing Unit (CPU) architecture as the supercomputers at Oak Ridge National Laboratory (ORNL) and Lawrence Livermore National Laboratory. Traverse is currently one of the largest systems at Princeton and in the top 500 systems in the world.

Curt Hillegas, associate CIO, Research Computing, Office of Information Technology and the Princeton Institute for Computational Science and Engineering (PICSciE) and a member of the PPPL advisory board who led the project to purchase and install the cluster, said: “Traverse is a mini version of ORNL’s Summit, thereby providing a stepping stone for the research community to one of the world’s fastest supercomputers. Getting experience using Traverse will allow our research groups to adapt their codes, so they can use the current leadership-class machines and be best prepared for the new exascale systems — capable of at least one exaFLOPS, or a billion billion calculations per second — expected to come online in the upcoming two years.”

Exascale speeds are expected to help fusion researchers finally clear the remaining hurdles in the development of safe and sustainable fusion energy. “At that scale we will be able to simulate and optimize fusion reactors, speeding the deployment of fusion energy in the global battle against climate change,” explained Steven Cowley, PPPL director. “We are very grateful to the University for this marvelous facility.”

Plasma, the hot ionized gas that fuels fusion reactions, must be heated to very high temperatures for the particles to fuse and release their energy. The focus of much fusion research is preventing the swings in density and temperature that cause instabilities such as plasma disruptions, edge localized modes and energetic-particle driven modes. Machine learning (ML) techniques are helping researchers create better models for rapid control and containment of plasma.

C.S. Chang, who heads the Center for High-fidelity Boundary Plasma Simulation at PPPL, said: “Artificial intelligence (AI) and machine learning techniques could be a game changer. Due to the complicated nonlinear physics involved in these problems, using a supercomputer became a necessity for theoretical understanding. PPPL scientists will use Traverse to attack many of these problems in experiments, to collaborate with domestic and international researchers, and to help predict plasma performance in ITER, the international plasma research project using the world’s largest magnetic fusion device, or tokamak.”

The AI advantages for scientific discovery are numerous, explained Chang. The hope is that equations will be solved much faster without going through traditional time-consuming numerical processes; experimental and theoretical data will be used to formulate simple equations that govern the physics processes; and the plasma will be controlled almost instantaneously, in millisecond time-frames too fast for human intervention.

“A GPU-dominated computer such as Traverse is ideal for such AI/ML studies,” said Chang. “Solving these, and other important, physics and AI/ML problems on Traverse will greatly enhance the capabilities of graduate students, postdoctoral scientists and researchers, and their ability to advance these highly impactful areas in the world fusion and computational science research.”

“Traverse is a major initiative in the University-DOE partnership,” McComas said. “Princeton and the U.S. Department of Energy have a long-standing commitment to the shared missions of fundamental research, world-leading education and fusion as a safe energy source. With the launch of Traverse, we look forward to even stronger connections between the University, PPPL and the DOE, and to accelerating leading-edge research needed to make fusion an abundant, safe and sustainable energy source for the U.S. and humanity.”

For more information about the application process to gain access to the research computing facility, members of the Princeton community should contact Curt Hillegas at curt@princeton.edu.