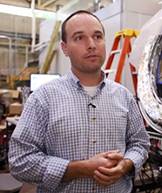 SPIDER, a stratospheric spacecraft constructed primarily in Princeton's Jadwin Hall, will head to Antarctica this December with researchers from Princeton and other institutions to begin a 20-day orbit roughly 110,000 feet above Earth. During that period, SPIDER's six large cameras will look for the pattern of gravitational waves that can be traced back to the beginning of the universe, says Princeton assistant professor of physics William Jones (pictured), who leads the multi-institutional project.

Assembled or taken apart, SPIDER exhibits such size and complexity that it's hard to believe how William Jones, a Princeton University assistant professor of physics, so easily accepts that the instrument will likely never be seen again in one piece. Then again, the arduous trip awaiting the enormous orb — which will ascend far above Antarctica to capture images of the early universe's remnants — leaves little room to hope for its safe return.

Constructed primarily in Princeton's Jadwin Hall, SPIDER is a stratospheric spacecraft that in December will begin a 20-day orbit in Earth's stratosphere at an altitude of roughly 110,000 feet. During that period, SPIDER's six large cameras will look for the pattern, or polarization, of gravitational waves produced by the fluctuation of energy and density that resulted from the Big Bang. These waves, Jones explained, are a "statistically unique fingerprint" that can be traced back to the beginning of the universe. Many astronomical instruments measure various characteristics of this fingerprint — SPIDER is designed to characterize the "shape" of it, said Jones, who is the project's principal investigator.

"The ultimate goal of SPIDER is to see to what extent we can identify a very characteristic feature in that polarization that's expected to come from the earliest stages of the evolutionary growth of our universe," Jones said.

The SPIDER team will head to Antarctica in mid-October — the beginning of the southern pole's spring season — to unpack, calibrate and prepare the device for its voyage. Once SPIDER lands in early January, the researchers have about a week to locate SPIDER and retrieve the recorded data. A "recovery" can mean that the researchers return to the launch site, trek across the ice shelf on skis or by tractor to haul the instrument back, or take a small aircraft to the landing site and cut SPIDER into pieces that will fit on the plane. The researchers must be gone by mid-February before March ushers in the Antarctic winter. (Video by Danielle Alio, Office of Communications)

SPIDER — which used to be an acronym, but now is the project's formal name — is a multi-institutional project funded largely by a grant from NASA (no. NNX12AE95G), as well as the David and Lucile Packard Foundation. In addition to Princeton, the primary institutions involved are the University of Toronto; Case Western Reserve University; the California Institute of Technology and the Jet Propulsion Laboratory, a NASA-funded research center managed by Caltech; and the University of British Columbia. The project was proposed in 2006 while Jones, who joined Princeton's faculty in 2008, was a scientist at the Jet Propulsion Laboratory. Other partner institutions include Cardiff University in the United Kingdom; the Canadian Institute for Theoretical Astrophysics; Imperial College London; the National Institute of Standards and Technology in Boulder, Colorado; and the University of Cambridge.

The primary SPIDER instrument is a roughly 10-foot-tall orb with six chambers into which slide — "like bullets in a revolver," Jones said — cameras with 30-centimeter, or nearly 12-inch, lenses. This instrument takes to the sky encased in a carbon fiber-frame gondola — which is hoisted by a balloon — constructed at the University of Toronto. Once in Antarctica, Jones and nearly 20 other researchers, mostly graduate students from Princeton and other institutions, will run the project from McMurdo Station, a National Science Foundation-run research center located on the Ross Ice Shelf.

A significant proportion of the craft also is devoted to a large tank of liquid helium, known as a cryostat, that keeps the cameras within a frosty 0.25 degrees Kelvin (minus 459 degrees Fahrenheit) — just above the lowest temperature possible, absolute zero. The cameras must be this cold because the cosmic microwave background (CMB) has a temperature of only 3 degrees Kelvin, Jones said. Otherwise, the "noise" from the cameras' heat would dominate the signal from the CMB. Led by Jones, the Princeton team developed the camera and cryostat systems. 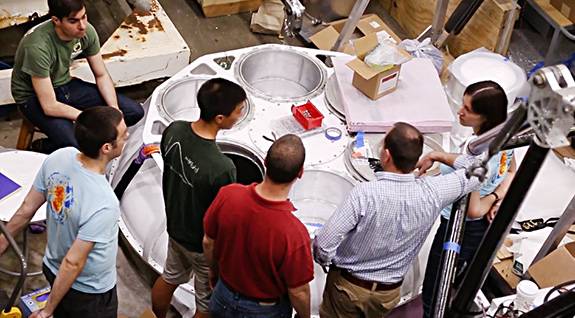 Nearly 20 researchers, mostly graduate students, from Princeton and other institutions will accompany SPIDER to Antarctica. In this image, Jones (second from right) and collaborators discuss the project in Jadwin Hall. At their feet is the outer cover of SPIDER with holes for the six chambers into which slide — "like bullets in a revolver," Jones said — cameras with 30-centimeter, or nearly 12-inch, lenses.

The SPIDER team will head to Antarctica in mid-October — the beginning of the southern pole's spring season — to unpack, calibrate and prepare the device for its voyage. Antarctica offers a barren landscape in which a device with SPIDER's girth can safely float and land far from population centers, Jones said. The constant sunlight of the Antarctic summer also provides the craft with an endless power source, he said. SPIDER will be launched about 10 kilometers (more than 6 miles) from McMurdo Station.

After a three-hour ascent, the instrument will remain in contact with the researchers on the ground for about 24 hours. "That's a very critical time period because that's your last chance to get the system configured," Jones said. "Once it goes over the horizon, once you lose that line-of-sight communication, then you have a very restricted bandwidth. Then you're essentially just getting status reports from the payload. You can send commands, but you can't get any appreciable amount of science data back."

Spring in Antarctica is less a respite from the continent's notoriously harsh winter, and more a race against its return: "Every day counts," Jones said. The researchers must be gone by mid-February before March ushers in the worse of the Antarctic winter. Once SPIDER lands in early January, the researchers have about a week to locate SPIDER and retrieve the recorded data. A "recovery" can mean that the researchers return to the launch site, or trek across the ice shelf on skis or by tractor to haul the instrument back.

A "bad" recovery could mean taking a small aircraft to somewhere on the Antarctic Plateau — the frigid high-altitude region in central Antarctica — and chopping SPIDER into pieces that can fit through the plane's diminutive door, Jones said. Save the data first, the cameras second, he said. In preparation for this possibility, Jones and his team have already constructed a second liquid-helium tank for a future flight.

"It's extremely unlikely the instrument will be back in one piece, but that's part of the game for ballooning," said Jones, who has worked on other balloon research projects. "With all these missions, you know going into it that they're disposable in some sense. They're designed so we can reuse as much as possible, but you're always against some limitation."

"These kinds of projects naturally lead to satellite instruments and larger-scale science, so it's a really good jumping-off point as a graduate student to get involved with this kind of project," Rahlin said.

"I've never been to Antarctica, but I'm really looking forward to it because all of the other people on SPIDER have, except for a couple of other grad students," she said. "We always hear really awesome stories about the ballooning campaigns and all the other science that goes on in Antarctica. It will be really cool to see it firsthand."