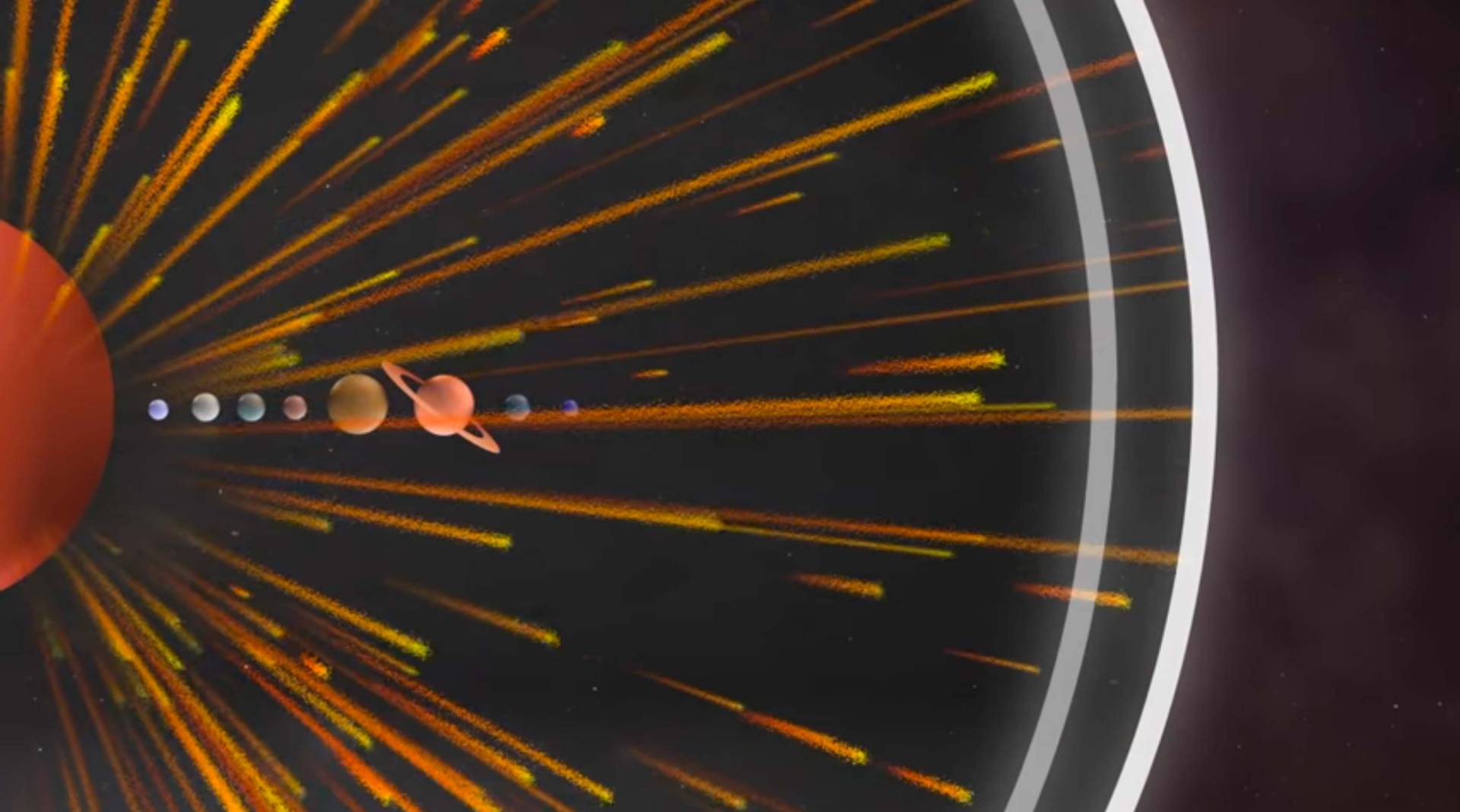 The heliosphere — the cosmic bubble that envelops our sun and all the planets of our solar system — marks the boundary where particles streaming out from our sun (collectively known as the solar wind) collide with the interstellar medium. For more than 11 years — one complete solar cycle, from high sunspot activity to low sunspot activity and back again — David McComas and his team have been looking at data from IBEX, the Interstellar Boundary Explorer, to study the shape and character of the heliosphere.

Far beyond the orbits of the planets are the hazy outlines of the heliosphere, the magnetic bubble in space that we call home. This flexible cosmic bubble stretches and shrinks in response to the sun’s gasps and sighs.

Now, for the first time, a team of scientists led by Princeton’s David McComas have gathered an entire solar cycle of data from NASA’s IBEX spacecraft, which they used to study how the heliosphere changes over time. Solar cycles last roughly 11 years, as the sun swings from seasons of high to low activity and back again. Scientists were eager to use IBEX’s 11-year record to watch the shifts at the edge of the heliosphere. The results show the heliosphere’s shape — a matter of debate in recent years — and hint at processes behind one of its most puzzling features. These findings, along with a newly fine-tuned data set, were published in The Astrophysical Journal Supplements on June 10.

“It’s this very small mission,” said McComas, the principal investigator for the mission and a professor of astrophysical sciences. IBEX, short for the Interstellar Boundary Explorer, is the size of a bus tire. “It’s been hugely successful, lasting much longer than anybody anticipated. We’re lucky now to have a whole solar cycle of observations.”

Mapping the solar system’s edge, one particle at a time

The bubble of the heliosphere is filled with the solar wind, the constant flow of charged particles from the sun. The solar wind rushes out in all directions, a million miles per hour, until it butts against the interstellar medium, winds from other stars that fill the space between them. 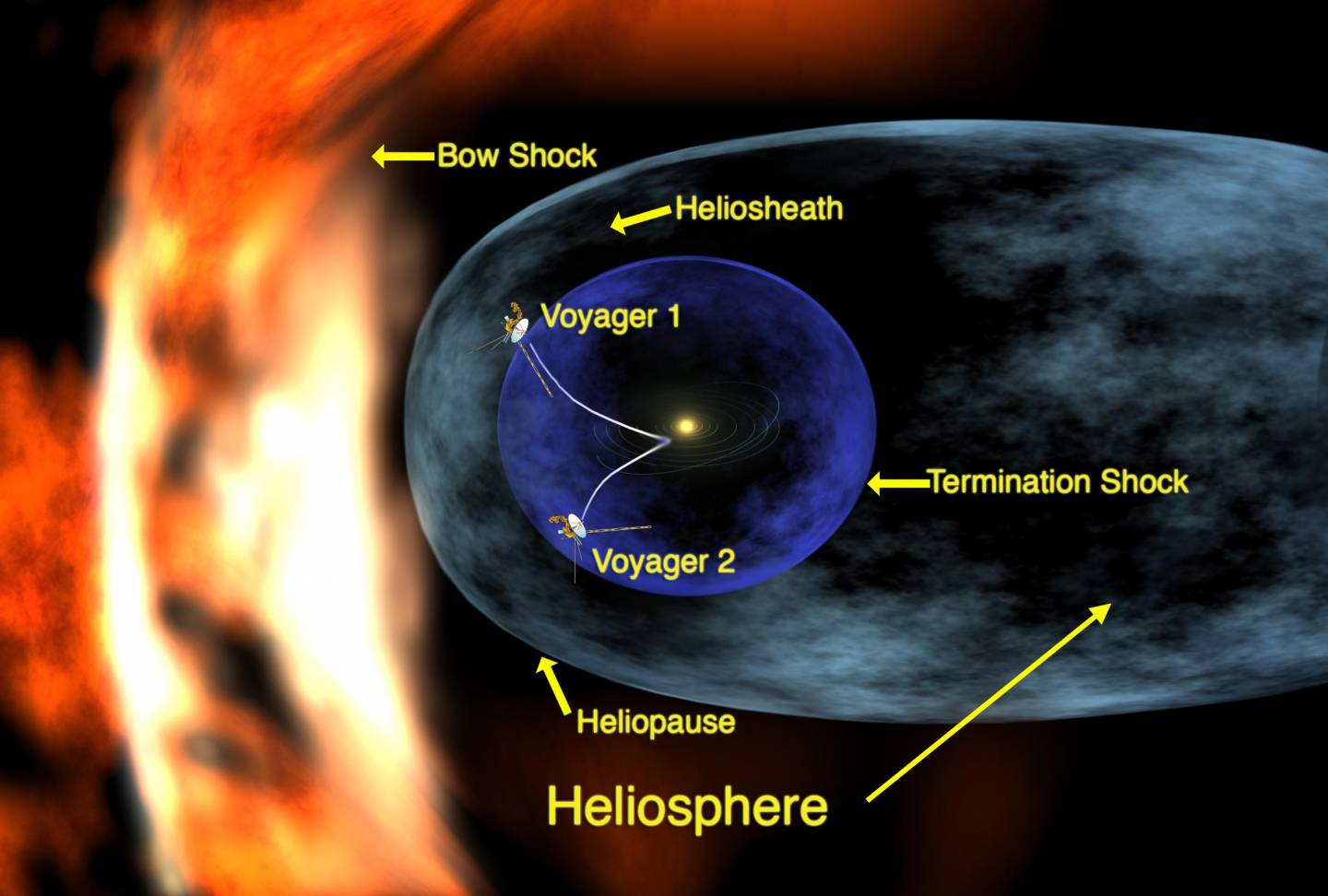 An artist drew this illustration of our heliosphere, the cosmic bubble surrounding our sun and solar system. As the heliosphere plows through interstellar space, a bow shock forms, similar to the bow wave of a ship moving through the ocean. Our heliosphere’s cosmic surroundings (far left) are known to astronomers as the Local Fluff, a cloud of superhot gases. Where the solar wind meets the Local Fluff is the edge of the heliosphere, called the heliopause. Just inside that lies a turbulent region called the heliosheath. Also present in this illustration are the two Voyager spacecraft with their approximate paths out of the heliosphere. Voyager I was deflected northward above the plane of the planets' orbits when it swung by Saturn in 1980. Voyager II was deflected downward by Neptune and is heading southward below the plane of the planets.

Artist's concept of our heliosphere by Walt Feimer of NASA/Goddard.

IBEX focuses on tiny particles called energetic neutral atoms that are created when hot, charged particles like the ones in the solar wind collide with cold neutrals like those flowing in from interstellar space. Zippy solar wind particles can snatch electrons from lumbering interstellar atoms, becoming neutral themselves.

It takes about a year for a gust of solar wind to race past the planets, past the asteroid belt and the Kuiper Belt, to the edge of the heliosphere — a journey 100 times the distance between the sun and Earth. Along the way, the solar wind picks up ionized atoms of interstellar gases that have wriggled in to the heliosphere. The solar wind that arrives at the edge is not the same wind that left the sun a year before.

Solar wind particles might spend another six months roving the chaos of the heliosheath, the gulf between the heliosphere’s two outer boundaries. Inevitably, some collide with interstellar gases and become energetic neutrals. It takes the neutral particles close to another year for the return trip, traversing the space from the edge of the heliosphere back to IBEX — and that’s only if the particles happen to be heading in precisely the right direction. Of all the neutral particles formed, only a few actually make it to IBEX. The whole trip takes two to three years for the highest-energy particles in IBEX’s observing range, and even longer at lower energies or more distant regions.

IBEX takes advantage of the fact that neutral atoms like these aren’t diverted by the sun’s magnetic field: Fresh neutral particles bound away from collisions in nearly a straight line.

IBEX surveys the skies for the particles, noting their direction and energy. The spacecraft only detects about one every other second. The result is a slowly building map of the interstellar boundary, crafted from the same principle a bat uses to echolocate its way through the night: monitor incoming signals to learn steadily more about one’s surroundings. By studying where the neutrals come from, and when, IBEX can trace the remote boundaries of our heliosphere.

“We’re so lucky to observe this from inside the heliosphere,” said Justyna Sokół, who was a NAWA Bekker Program Visiting Fellow at Princeton 2019 to 2020.

Using IBEX’s 11-plus years of data, McComas and his team observed the ever-changing solar wind. They saw that when the wind gusts, the heliosphere inflates like a balloon, and neutral particles surge at the outer fringes. When the wind calms, the balloon contracts; neutral particles dwindle. The ensuing seesaw of neutral particles, the scientists reported, consistently echoed two to three years after the changes in the wind — reflecting their journey to the edge of the solar system and back.

“It takes so many years for these effects to reach the edge of the heliosphere,” said Jamey Szalay, an associate research scholar in astrophysics and a member of the IBEX team. “For us to have this much data from IBEX finally allows us to make these long-term correlations.” 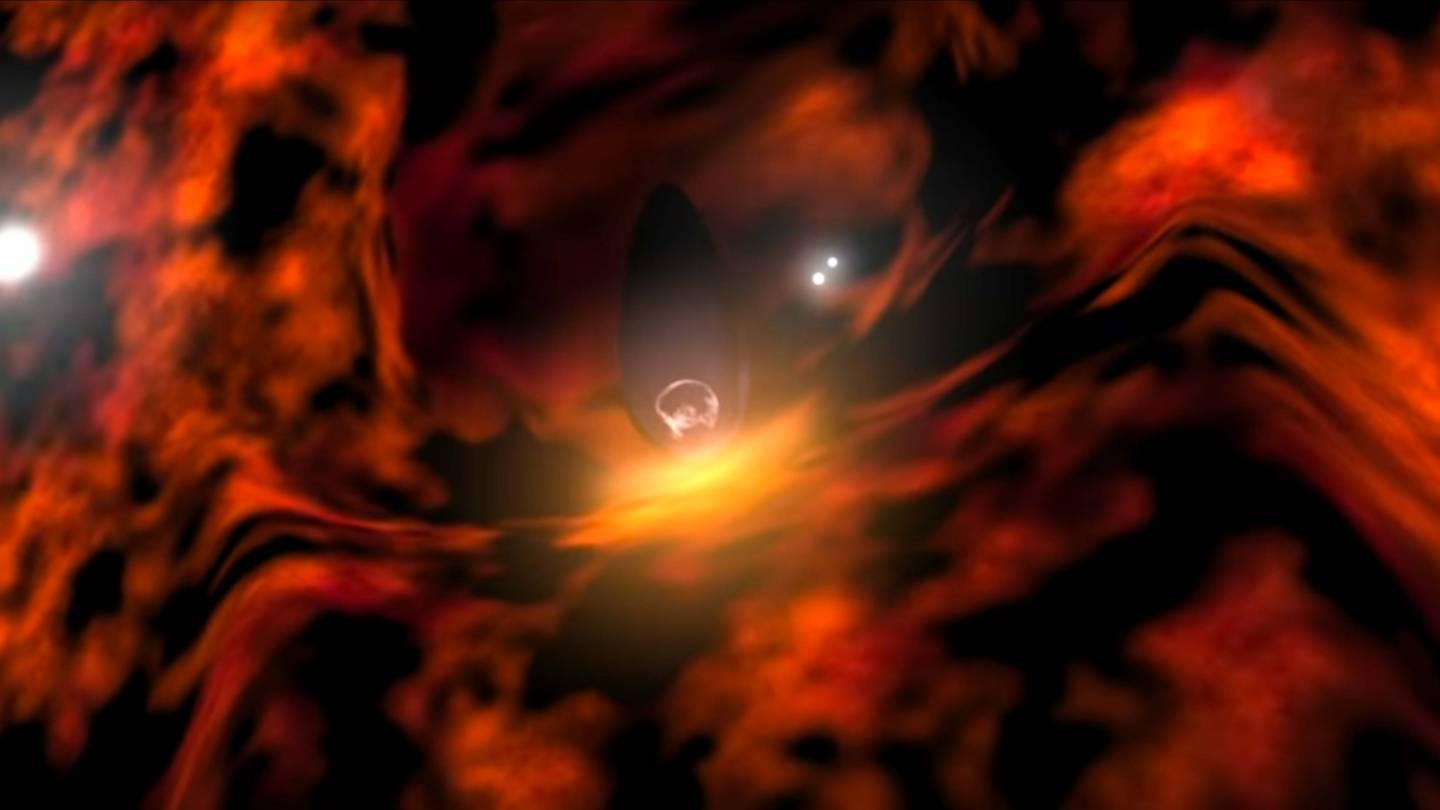 Shaping up the heliosphere

From 2009 to 2014, the wind blew fairly low and steady, a gentle breeze. The heliosphere contracted. Then came a surprise swell in the solar wind, as if the sun heaved a great sigh. In late 2014, NASA spacecraft orbiting Earth detected the solar wind pressure increase by about 50 percent — and it has remained high since then.

These changes were not symmetric. Each observed bump traced the quirks of the heliosphere’s shape. The scientists were surprised at how clearly they saw the bow wave of the solar wind pushing out the heliopause.

“Time and the neutral particles have really painted the distances in the shape of the heliosphere for us,” said McComas, who is also Princeton’s vice president for the Princeton Plasma Physics Laboratory.

IBEX still hasn’t observed the effects of this cosmic sigh from the back end of the heliosphere, the heliotail. That suggests that the tail end is much farther away from the sun than the front — those particles are on a much longer journey. Maybe the solar wind surge is still hurtling toward the tail, or maybe neutral particles are already on their way back. In the coming years, the IBEX team will be watching for them.

“Nature set up this perfect experiment for us to better understand this boundary,” Szalay said. “We got to see what happens when this one big thing — the solar wind push — changes.”

The shape of the heliosphere has been a matter of debate between scientists in recent years. Some have argued our bubble in space is as spherical as a globe; others suggested it is closer to a croissant. But in this study, McComas said, IBEX data clearly shows the heliosphere’s response to the solar wind push was asymmetric — so the heliosphere itself must be asymmetric too, shaped something like a comet. The sun is situated close to the front, and as it hurtles through space, the heliotail trails significantly farther behind.

IBEX’s many years of data have also brought scientists closer to an explanation for one of the heliosphere’s more puzzling features, known as the IBEX ribbon — one of IBEX’s biggest discoveries. Announced in 2009, it refers to a vast, diagonal swath of energetic neutrals, painted across the front of the heliosphere. It’s long puzzled scientists: Why should any part of the boundary should be so different from the rest?

Over time, IBEX has indicated that what forms the ribbon is very different than what forms the rest of the interstellar sky. It is shaped by the direction of the interstellar magnetic field. But how are ribbon particles produced? Now, the scientists report that it’s very likely a secondary process is responsible, causing the journey of a certain group of energetic neutral particles to roughly double.

The story goes like this: After becoming energetic neutrals, rather than ricochet back toward IBEX, this group of particles streak in the opposite direction, across the heliopause and into interstellar space. There, they get a taste of the Local Fluff, cruising until some inevitably collide with passing charged particles, losing an electron once again and becoming tied to the surrounding magnetic field. Another two years or so pass, and the charged particles collide yet again with slower peers, stealing electrons like they’ve done before. After this brief migration beyond the heliosphere, the twice-born energetic neutrals eventually re-enter, hurtling back toward home.

Far exceeding its initial mission of two years, IBEX will soon be joined by another NASA mission, IMAP — short for the Interstellar Mapping and Acceleration Probe, for which McComas also serves as principal investigator. The mission is scheduled to launch in late 2024.

“IMAP presents a perfect opportunity to study, with great resolution and sensitivity, what IBEX has begun to show us, so that we will really get a detailed understanding of the physics out there,” McComas said.