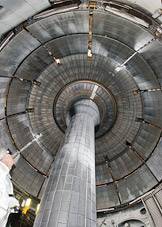 The DOE Princeton Plasma Physics Laboratory (PPPL) conducts research along the frontier of fusion science. PPPL's National Spherical Torus Experiment (NSTX) is one of the nation's largest experimental fusion machines. The top of the interior resembles the inside of an umbrella. (Photo: Elle Starkman)

Research being conducted along the frontier of fusion science makes the DOE Princeton Plasma Physics Laboratory (PPPL) a destination for young scholars and community members interested in the field of fusion energy.

More than 2,100 visitors from across the region attended a May open house, adding to the thousands of students and visitors who have made their way to the lab for science competitions, tours and events throughout the year.

PPPL is home to one of the nation's largest experimental fusion machines, the National Spherical Torus Experiment (NSTX). The U.S. Department of Energy funds PPPL and Princeton University manages the laboratory, sited on 88 acres of the University's Forrestal Campus in Plainsboro.

At the lab, there are educational opportunities for students and teachers from elementary school through postgraduate studies.

"We collaborate with researchers across the globe to develop fusion as a safe, clean and abundant energy source for the future," PPPL Director Stewart Prager said. "Coupled with fusion research is the study of plasmas." 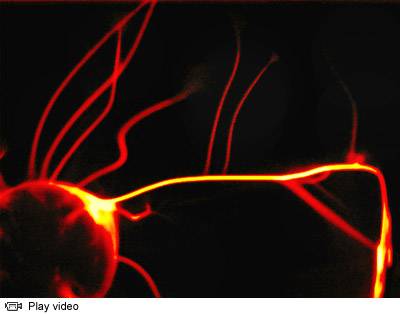 Watch a slideshow of images from PPPL experiments. This close-up of a plasma shows the hot gas of charged particles. (Photo: Elle Starkman)

Plasma is a hot gas of charged particles and is the fuel for fusion energy production. This hot gas accounts for most of the visible universe, making up every star in the cosmos. Fusion -- the same process that powers the Earth's sun and other stars -- occurs when two light atomic nuclei join within a plasma at very high temperatures. When they fuse, matter is converted into energy, which can then be converted to heat for the generation of electricity.

"In our experiments, we use powerful magnets to confine and shape plasma in a vacuum chamber and study its behavior," Prager explained. "For use as a practical source of fusion energy, 100-million-degree plasmas must be contained within magnetic bottles for long periods of time."

In addition to studying plasmas for fusion energy, PPPL scientists conduct research in plasma science and technology, and educate the next generation of plasma and fusion scientists.

"We study plasma-based propulsion systems for space vehicles, how plasma processes affect the accretion of matter onto black holes, and how plasmas give rise to flares on the surface of stars," Prager said. "We also develop spinoff technologies, from a small nuclear material detection system to a plasma treatment method that could lead to artificial muscles."

With nearly 500 employees and students, PPPL has extensive capabilities for the experimental and theoretical study of fusion and nonfusion plasmas and for the design, fabrication and operation of experimental plasma facilities of all types. The University provides the institutional framework for a broad laboratory-based program of education in plasma physics and related science and technology. 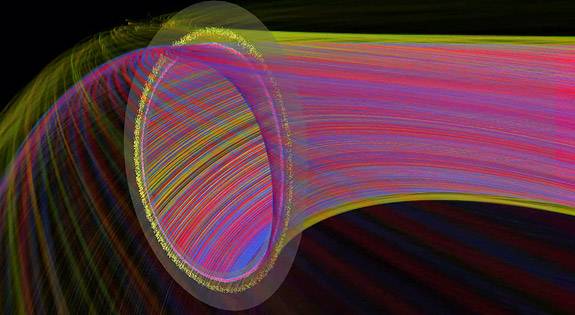 In this simulation of plasma turbulence inside NSTX, the colorful strings represent higher and lower electron density in turbulent plasma as it circles around the donut-shaped fusion reactor; red and orange are higher density. (Image: Kwan-Liu Ma, Chris Ho and Chad Jones, University of California-Davis)

One experiment is the Lithium Tokamak Experiment (LTX). In LTX, scientists are studying the use of liquid-lithium metal as an inner wall for fusion devices and how such a wall affects plasmas. "Lithium walls may dramatically improve plasma performance, yielding hotter and cleaner plasmas," said LTX scientist Dick Majeski.

The use of liquid lithium is also being explored on NSTX, a collaborative fusion facility supported by the U.S. Fusion Energy Sciences Program. The experiment tests the physics principles of spherically shaped plasmas, which could lead to the development of smaller, more economical fusion reactors.

A large, concrete-walled room houses NSTX, which is laden with power supplies and diagnostics -- tools to measure such things as plasma temperature and electron density. Stripped of the exterior cords, tubes and boxes, the machine resembles a multistory holiday ornament with red and blue bands. The bands are magnetic coils.

PPPL scientists also are involved in the large international fusion energy research collaboration called ITER, currently under construction in the south of France. ITER aims to demonstrate the scientific and technological feasibility of fusion as an energy source. ITER has seven project partners, including China, the European Union, India, Japan, Russia, South Korea and the United States. PPPL is part of the U.S. ITER effort, which is based in Oak Ridge, Tenn.

A major part of PPPL's mission is to collaborate on the development of fusion as an energy source for the world. Scientists throughout the lab have remarked that they chose the field of fusion energy because of its potential benefits to society. Nuclear fusion, the process that powers the sun, offers an environmentally benign, intrinsically safe energy source with an abundant supply of low-cost fuel, the researchers said.

"I became interested in plasma physics and fusion because of the wonderful combination of pure physics and potentially huge application," Prager said.

Added PPPL scientist Hutch Neilson, "I decided to become a fusion scientist while in high school after reading literature from the Atomic Energy Commission. I concluded that fission seemed to be a solved problem but the future belonged to fusion, and I was attracted to its enormous challenges."