Stewart Prager, a well-known plasma physicist and fusion scientist, has directed the U.S. Department of Energy's Princeton Plasma Physics Laboratory (PPPL) since 2009. Scientists at PPPL, the United States' leading magnetic fusion facility, are working on the creation of fusion energy, which has the potential to become a safe, clean and abundant energy source for the future.

Administrative focus: Prager, a well-known plasma physicist and fusion scientist, arrived in January 2009 from the University of Wisconsin to become director of PPPL, the United States' leading magnetic fusion facility. Fusion energy, which is fueled by hot gases of charged particles known as plasmas, has the potential to become a safe, clean and abundant energy source for the future. For nearly 60 years, Princeton has been a world leader in research on magnetic fusion energy due to efforts by scientists and engineers at PPPL. In 1994, an experimental device built at PPPL, known as the Tokamak Fusion Test Reactor (TFTR), yielded an unprecedented 10.7 million watts of fusion power. As head of the lab, Prager is directing fundamental inquiries to establish the knowledge base for fusion energy, to understand how plasmas behave and to apply this understanding to a wide range of applications. The facility is managed by Princeton University and funded by DOE's Office of Science.

What new initiatives have you been focusing on since assuming the leadership of PPPL?

PPPL scientists regularly generate intriguing new ideas. We have made great progress toward a major enhancement of our main experimental facility -- the National Spherical Torus Experiment, or NSTX. We have funding for an upgrade that will yield an order-of-magnitude improvement in its physics capabilities: a doubling of the plasma current, doubling of the heating power and quintupling of the plasma duration. We expect to complete the upgrade in three to four years, so the upgrade will guarantee the scientific vitality of NSTX for at least a decade into the future.

Before the upgrade starts, we will be running experiments on NSTX starting in July in which researchers will study how heat escapes as hot magnetized plasma and what materials are best for handling intense plasma powers. 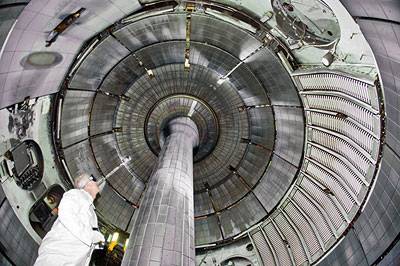 We also have moved forward with new studies of a liquid boundary for a fusion plasma, in contrast to the more common solid boundary, with expanded operation of our exploratory Lithium Tokamak Experiment (LTX), and have enjoyed very promising interactions with materials and surface scientists in the engineering school.

PPPL has led a two-year national planning effort to define a program to apply the most powerful computers to model the whole, complex fusion plasma system. We have plans for expanded work in plasma astrophysics and have led a national study to define opportunities in this field. Looking into the fusion future, we have completed a conceptual study of a pilot fusion plant as a possible next step for the U.S. fusion program, investigating various designs and the strategic implications of such a step. At PPPL we are generating many new ideas and initiatives, even in this difficult budgetary climate. 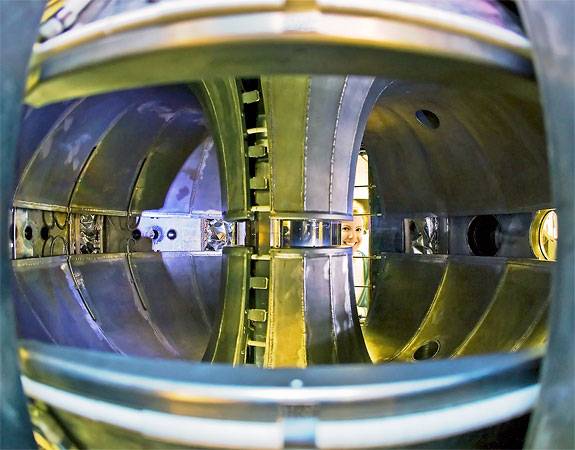 The Lithium Tokamak Experiment (LTX), one of the initiatives Prager is overseeing, is designed to be the first device in the world to contain a full, liquid lithium wall. Former PPPL graduate student Laura Berzak peers through a rear port of the vacuum vessel of the LTX.

Fusion scientists, like you, have been working to produce fusion reactions for many decades. Why is it so hard to create fusion energy?

In a nuclear fusion reaction two atomic nuclei fuse and release energy. In a fusion reactor the core will contain the plasma producing this energy. It's a difficult process because it requires making a hot gas that is 10 times hotter than the core of the sun -- 100 hundred million degrees -- and confining that for long periods of time in a controllable way. Plasmas exhibit complex behavior that is difficult to understand. The engineering challenge is also huge, because you have to surround this hundred-million-degree plasma with a material structure. We often say that fusion is maybe the most, or one of the most difficult science and engineering challenges ever undertaken.

Why should the United States maintain its funding of the fusion program?

The first reason is U.S. competitiveness, both the specific competitiveness in fusion and the general competitiveness in science and technology. Whoever controls the energy sector, whoever innovates with the science, is going to be economically dominant. Second, in fusion, our contributions are needed for the world to acquire this transformative energy source as soon as possible. The United States has a workforce for fusion that is second to none.

Why is it that fusion is not always mentioned in discussions on alternative energy?

Fusion is not going to be affecting the electrical grid in 10 years, and most discussions focus on the very-near term. However, underfunding fusion becomes a self-fulfilling prophecy that keeps it always in the long term. Twenty years ago, we proposed building a small burning plasma experiment. It wasn't built. If it had been, we could have shown by now how a burning plasma works and not be waiting for results on ITER in the 2020s. Fifteen years ago, we proposed building a long-pulse superconducting tokamak, which can be operated for long periods of time to investigate the science of controlling plasmas. We would have had that data by now instead of waiting to see the results on such experiments now starting up in Asia. 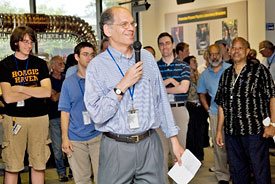 Prager addresses members of the PPPL staff. As head of the lab, Prager directs the work of PPPL scientists who are seeking to enhance understanding of fusion energy and to apply lessons of plasma physics to a wide range of applications.

Have there been practical benefits from fusion research so far?

There are huge practical benefits and untapped potential benefits, as well. The plasma science learned from fusion has enormous application. We all know about plasma TVs, but plasmas are used to make computer chips, to develop more efficient lighting, to burn up wastes, to treat medical wounds and to power rockets through plasma thrusters, to name but a few. Spinoffs from fusion technology include new techniques to detect nuclear materials and electromagnetic launchers for aircraft on carriers. Plasma science learned from fusion is also being used to enhance our understanding of the cosmos.

If you look where we are now, the progress is really quite remarkable. We routinely produce plasmas that are hundreds of millions of degrees in temperature. We've learned how to control them in very fine ways so we can manipulate them with remarkable finesse. We're not yet done but we can actually produce and tweak how a hundred-million-degree-plasma behaves. We have come so far that we can approximate conditions of a fusion reactor in a laboratory. We've come so far that the world collectively is going ahead and building ITER (an international experiment designed to demonstrate the scientific and technological feasibility of fusion energy planned to go online in 2019), which will produce 500 million watts of fusion power. We've come so far that we can see the endpoint.

So it's reasonable to believe that fusion reactors will someday exist?

That question has been largely answered with some degree of confidence. It's a matter of deciding whether we want to commit the resources to the remaining development that needs to be done. We have a clear choice before us: The United States can either design and build fusion energy plants or we can buy them from Asia or Europe.

In terms of scope and ambition, how does the lab compare to what it was in the 1980s and 1990s when the TFTR experiments were in full swing?

The laboratory today is equally as vital as it has ever been. But it's smaller. The laboratory's reduction in size has paralleled the evolution of the fusion program in the United States at large. It had this peak where it demonstrated the production of 10 million watts of power as an experiment. After that, in the mid-'90s, the fusion budget in the United States fell when Congress was reducing budgets severely. Since then, the budget has been stable, but about one-third of its former size. The United States and PPPL are still a leader in fusion but we're not "the" leader in fusion.

What kind of fusion research programs are being pursued in other countries?

There has been a surge of interest in Asia. South Korea has blasted onto the fusion scene and recently begun operating a new experiment. This experiment was designed to be built at PPPL, but it was cancelled by the Department of Energy because of lack of funds. Chinese researchers also have built a similar kind of new experiment and recently began operations. The same can be said for the European Union, which is hosting ITER. Germany, also, is constructing a new facility. The Indian government is increasing its fusion program. The Japanese government also is refurbishing the country's large tokamak experiment to such an extent that it is also going to be a new major facility.

Fusion research has been described as a science without borders. Are collaborations with other countries a component of PPPL's program?

We have very strong collaboration programs with other countries. Other nations solicit the collaboration with PPPL because we have such deep expertise. And, conversely, we want to make use of the new facilities abroad. 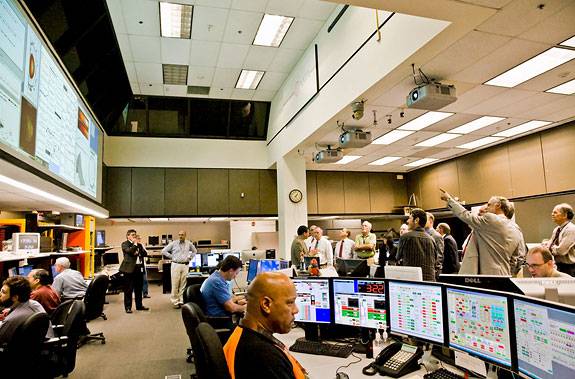 PPPL scientists and engineers monitor experiments on the National Spherical Torus Experiment (NSTX) from the lab's control room. Lab scientists will be launching a new run of experiments on NSTX this summer exploring how heat escapes as hot magnetized plasma and what materials are best for handling intense plasma powers.

What's the difference between the international ITER experiment and Princeton's own big current experiment, the NSTX?

ITER will be the biggest fusion experiment ever built and will be the size of a commercial reactor. NSTX is smaller. ITER will operate with fusion fuel and will produce what is called a burning plasma, meaning it will be self-sustaining. NSTX is more compact -- smaller and rounder. When you make this variation in the geometry, the opportunities are so rich that there are many reasons to do this. The NSTX design is a  leading candidate for the next major step in fusion research in the United States -- the establishment of a facility that operates with fusion fuel, producing large fluxes of neutrons (products of the fusion reaction) to develop and test the material components that surround the plasma.

What are your priorities and vision for PPPL?

The vision for the lab is that it be at the world forefront of fusion research, in basic plasma physics and in many applications of plasma science. We aim to aggressively enhance the knowledge base to deliver fusion to the world as quickly as possible. We also wish to expand our activities across the broad frontier of plasma science and technology.

To read a longer version of this interview, visit the PPPL website.