The American Society of Mechanical Engineers (ASME) on Oct. 5 presented the U.S. Department of Energy’s (DOE) Princeton Plasma Physics Laboratory (PPPL) with an engraved plaque designating the laboratory an ASME historic mechanical engineering landmark for its achievements in the quest to develop magnetically controlled fusion energy.

The ASME, which “promotes the art, science and practice of multidisciplinary engineering and allied sciences around the globe,” recognized the laboratory for its entire body of mechanical engineering achievements since 1951.

The historic achievements embody a wide range of devices designed and built to test the ability to house and facilitate fusion reactions. Included among the experimental machines have been new fabrication techniques that produced a facility with the structural strength and strict mechanical tolerances required to achieve world-record fusion plasma performance. For example, in the mid-1990s, PPPL’s Tokamak Fusion Test Reactor (TFTR) achieved a world record for power using fusion fuel. 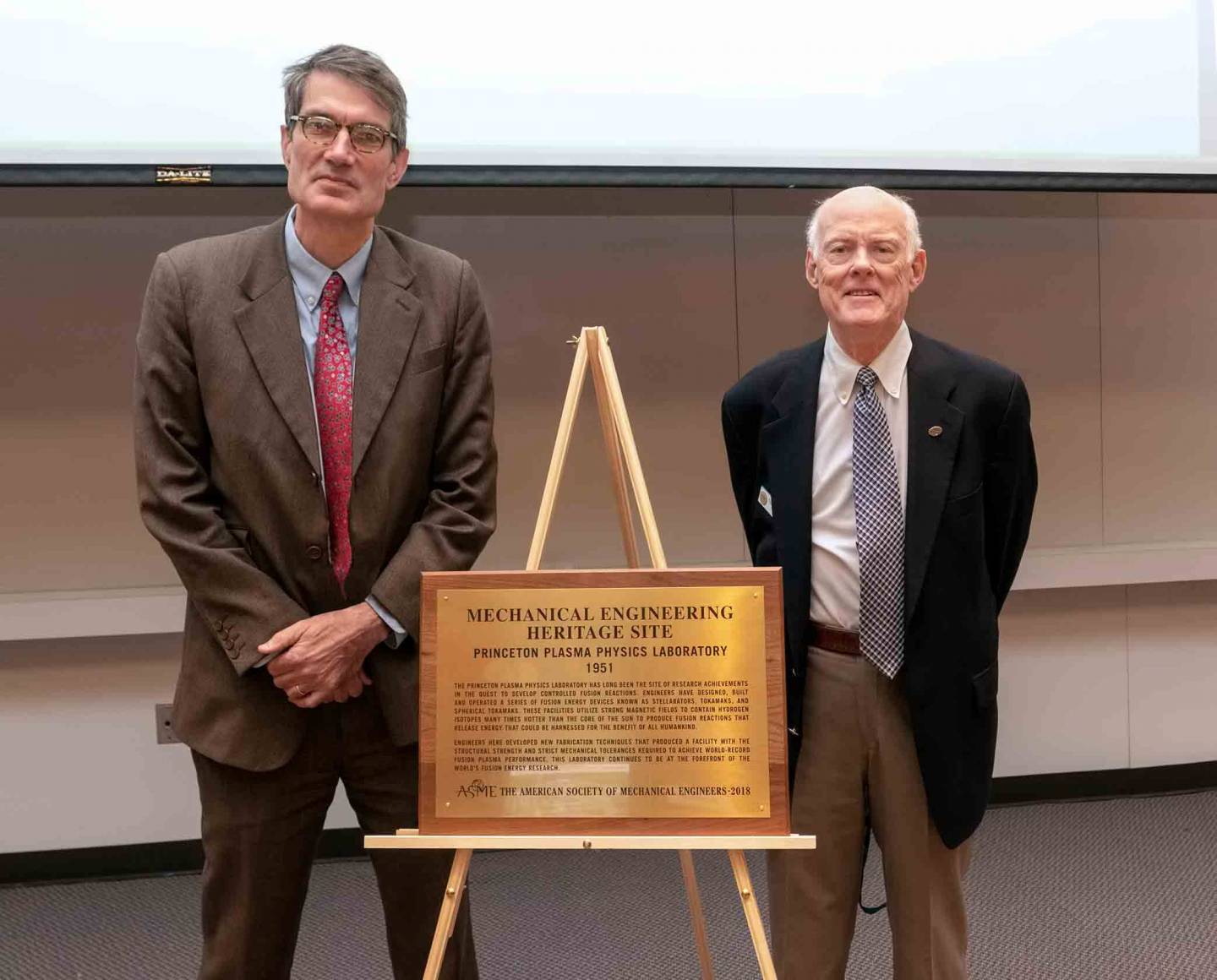 Steve Cowley, PPPL director, and Robert Simmons, past president of the American Society of Mechanical Engineers and former PPPL engineer, at the dedication of PPPL as an historic mechanical engineering landmark.

“We are honored to receive this landmark designation,” said Steve Cowley, director of PPPL. “Our mechanical engineers design and build the highly complex machines that our scientists use to explore controlled fusion energy. Innovative engineering is critical to our mission — the delivery of fusion power. This designation is fitting tribute to this laboratory’s superb engineering achievements.”

Fusion, the power that drives the sun and stars, is the fusing of light elements in the form of plasma — the hot, charged state of matter composed of free electrons and atomic nuclei — that generates massive amounts of energy. Scientists around the world are seeking to replicate fusion on Earth for a virtually inexhaustible supply of power to generate electricity.

“The magnetic devices that control these processes are in effect the experiments,” said Valeria Riccardo, head of Engineering, the largest department at PPPL. “Developing these devices takes the focused attention of teams of highly skilled engineers who spend years designing and realizing their projects.”

The laboratory has been at the forefront of the quest to develop magnetically controlled fusion energy since its founding by Princeton physicist Lyman Spitzer, who invented the stellarator, or “star generator.” The twisty-coil device, envisioned by Spitzer during a Colorado ski trip, generates all the magnetic fields that confine the plasma with external coils.

Twisty-coil stellarators can be compared with tokamaks, which are more widely used doughnut-shaped machines with simpler magnetic field coils. Tokamaks induce current in the plasma to twist the magnetic fields. TFTR, which the laboratory built and operated from 1982 to 1997, created a then-world record 10.7 million watts of fusion power in 1994 and produced a temperature of 520 million degrees centigrade — a record that still stands.

From 1993 to 1997, TFTR was the first magnetic fusion device to operate with reactor-grade fusion fuel — an equal mix of the hydrogen isotopes deuterium and tritium. The successful utilization of such fuel prepared the way for its coming use in ITER, the international experiment being built in France to demonstrate the feasibility of fusion power, and for all future tokamaks.

Heading the TFTR project was physicist Richard Hawryluk, now interim deputy director for operations and chief operating officer of PPPL. “There was tremendous excitement about these accomplishments both inside and outside the laboratory,” he said. “TFTR had in a sense opened a path to the future of magnetically controlled fusion energy.”

The laboratory has gone on to develop spherical tokamaks, devices shaped like a cored apple that produce relatively high plasma pressure, a key ingredient for fusion reactions, with less magnetic pressure than conventional tokamaks require. This capability could lead to cost-effective future tokamaks.

Attending the Oct. 5 recognition, at which Hawryluk served as master-of-ceremonies, were past and present PPPL engineers who have worked on many of these machines. Welcoming remarks came from Dave McComas, Princeton University vice president for PPPL, and from Laboratory Director Cowley. Dale Meade, former deputy director of PPPL, described the historic significance of the laboratory’s work. He said: “Joining the distinguished company of ASME landmark sites is quite an honor. They include sites ranging from the Shippingport Nuclear Power Station, which opened in 1958 as the first U.S. commercial electric-generating station to use nuclear energy, to the Stanford Linear Accelerator and the Apollo Lunar Lander Module.”

Outlining the role of the heritage program was Lee Langston, a member of the ASME History and Heritage Committee and a professor emeritus of the University of Connecticut. ASME has designated more than 265 landmark sites around the world since 1971 to demonstrate the significance of mechanical engineering to society in general.

A highlight of the event came as Robert Simmons, a past president of ASME and former PPPL engineer, presented the plaque citing PPPL as an historic mechanical engineering landmark to Cowley; the plaque had been concealed behind a curtain until then. James Van Dam, acting associate director of the DOE Office of Fusion Energy Sciences, congratulated the laboratory on its honor and displayed a photo of TFTR that hangs in his office.

Words on the plaque summed up the engineering achievements at PPPL. The testament read in part: “These facilities utilize strong magnetic fields to contain hydrogen isotopes many times hotter than the core of the sun to produce fusion reactions that release energy that could be harnessed for the benefit of all humankind.”