New Jersey Lt. Gov. Kim Guadagno visited the U.S. Department of Energy's Princeton Plasma Physics Laboratory (PPPL) on Monday, Feb. 13, learning about the facility's economic impact on the state and gleaning new facts about fusion science. After concluding a tour of the laboratory, Guadagno characterized it as being one of the state's "crown jewels."

Guadagno was wowed during a tour of the Plainsboro facility when she heard a song by the rock group Pearl Jam boom through plasma speakers. "Imagine a high school student looking at this and becoming inspired to study plasma," Guadagno said. Plasma, she learned during her 90-minute visit, is a superhot gas of charged particles and the fuel for fusion energy production. The laboratory's mission is to develop fusion as a safe, clean and abundant energy source for the future.

The lieutenant governor came to PPPL to discuss the potential for synergy between the laboratory and the state. Her visit included a brief overview of the fusion energy research being conducted at PPPL, a tour of research areas and demonstrations at the science education laboratory — one featuring a plasma speaker, an experimental device that transmits sound by turning on and off a one-inch, artificial lightning bolt in sync with an iPod.

Guadagno was joined by state economic development experts, including: Caren Franzini, the CEO of the state Economic Development Authority (EDA); Tracye McDaniel, CEO of Choose New Jersey, a nonprofit focused on encouraging statewide economic growth; Kathleen Coviello, director of technology and life sciences for the EDA; and Cathy Scangarella, director of state marketing for the Business Action Center, which is part of the New Jersey Department of State.

Guadagno and other members of the group said they viewed PPPL as a "crown jewel" in terms of innovation and cutting-edge research in fusion and plasma physics, and its potential for collaborative growth and economic development. The visitors and laboratory officials discussed their shared interest in exploring ways to increase research collaborations and attract startups in the state. They vowed to continue talking about ways to generate ideas and discover how they could support one another.

"We were delighted to come to PPPL today to learn more about fusion energy research and to see how you inspire and educate the next generation of scientists," Guadagno said. "By gaining insight about your research and a better understanding of what you do, we can promote your work, garner support and help identify potential collaborators."

Leading the group, Stewart Prager, director of PPPL, summarized the laboratory's research and vision — enabling a world powered by fusion energy and leading discoveries in plasma science and technology. He noted the laboratory's associated mission to advance basic plasma research and develop plasma applications and general spinoffs. He cited the Miniature Integrated Nuclear Detection System (MINDS) as a successful spinoff that grew out of fusion research. MINDS, which identifies specific sources of radiation that may be associated with the threat of nuclear terrorism, is a homeland security technology that has been transferred to the marketplace.

Prager also discussed how PPPL and fusion serve New Jersey. The laboratory employs staff spread over 10 legislative districts, procured $6.7 million in 277 purchase orders from New Jersey industry in 2011, and operates an extensive educational outreach program for the public and students from middle school through college, he said. In addition, ITER, an international fusion experiment being built in France, made more than $80 million in purchases from state industry in 2011. The United States is an ITER partner; PPPL is one of the U.S. ITER partners.

Princeton University officials present, including A.J. Stewart Smith, dean for research, and Robert Durkee, vice president and secretary, praised Guadagno's economic development activities. "The lieutenant governor has been a very forceful advocate for economic development in New Jersey, and it was terrific that she was able to come and see for herself everything that is going on and potentially could go on at PPPL," Durkee said. 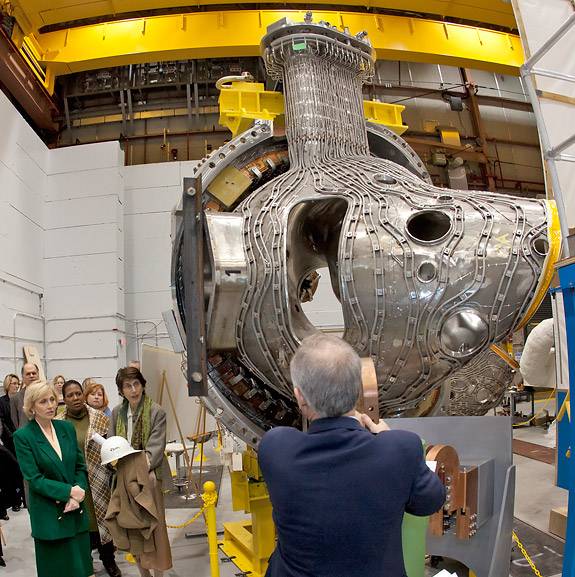 Guadagno studies components produced for the National Compact Stellarator Experiment. PPPL partners with small businesses that made parts for this experimental fusion device and several others at the facility. (Photo by Elle Starkman)

During a stop at the National Compact Stellarator Experiment (NCSX) components, Arlene White, a principal buyer and small business liaison, heralded the laboratory's small business program and its successes, and introduced one of PPPL's area subcontractors, Zenex Precision Products of Paterson, N.J. Zenex Vice President Robert Wronski showed the lieutenant governor NCSX parts fabricated by his company and lauded the benefits of Zenex's partnership with the laboratory.

The tour also included the National Spherical Torus Experiment (NSTX), the laboratory's flagship fusion experiment, which is being upgraded. The work will enhance the position of the NSTX as the world's most powerful spherical torus — or tokamak — a device that controls plasmas in an effort to create fusion power.

The last time the laboratory hosted such a high-level state government executive was a February 1995 visit by then-Gov. Christine Todd Whitman.

The University has managed PPPL since its origins in 1951, when Professor Lyman Spitzer, a founder of the field of plasma physics, initiated the study of fusion at the University. The facility, which was officially named the Princeton Plasma Physics Laboratory in 1961, is one of 10 national science laboratories funded by DOE's Office of Science.