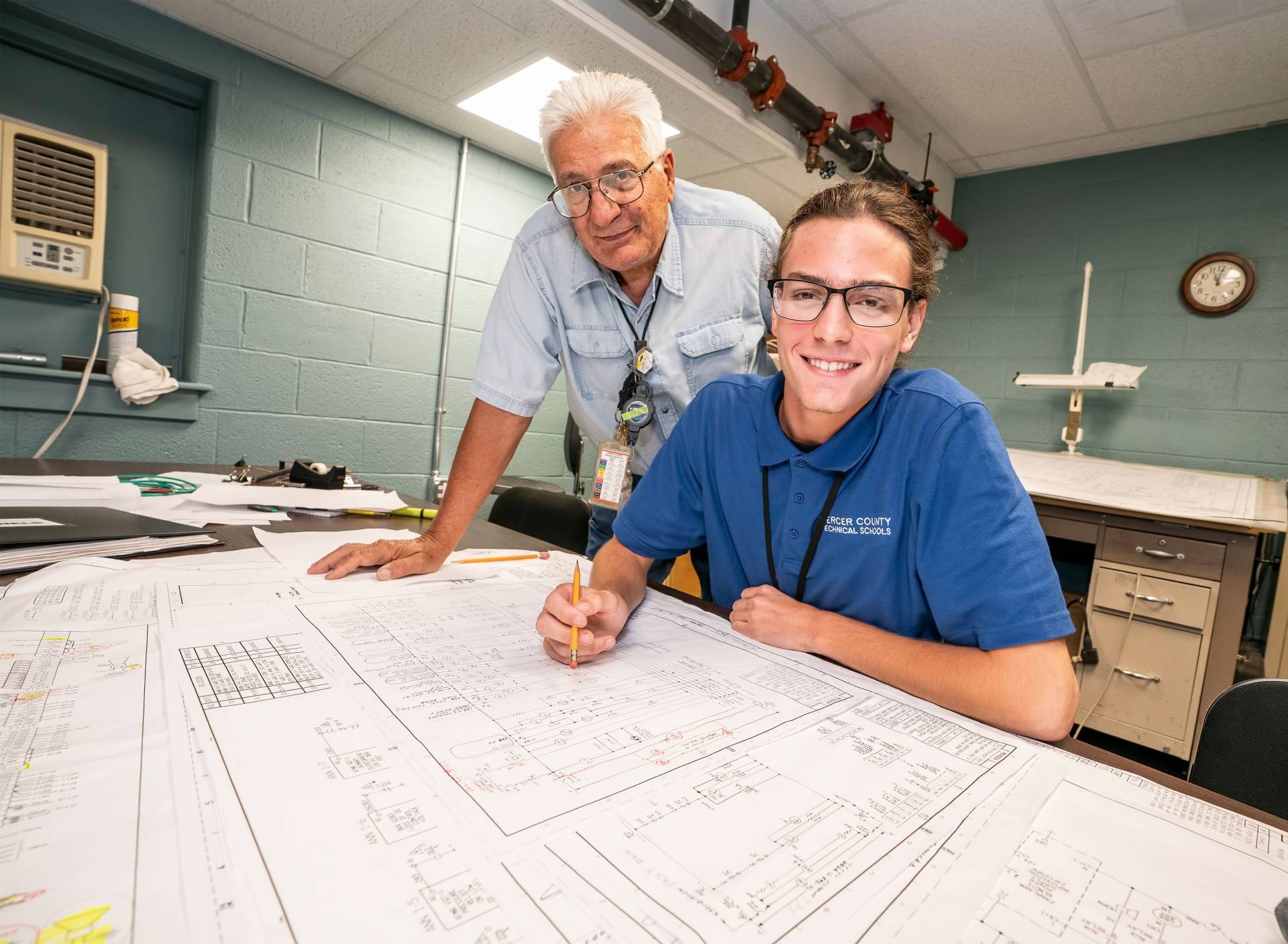 Young people enrolled in the pre-apprenticeship program at the U.S. Department of Energy’s (DOE) Princeton Plasma Physics Laboratory (PPPL) are shadowing skilled technicians. As they learn, they are preparing for their own future. Shown from left: Dick Debonis, a technical associate, looks at electrical drawings with program participant Sheehan Twomey.

Young people enrolled in the pre-apprenticeship program at the U.S. Department of Energy’s (DOE) Princeton Plasma Physics Laboratory (PPPL) are shadowing skilled technicians on tasks such as welding components for PPPL’s flagship fusion experiment or repairing the massive motor generators that power it. As they learn, they are preparing for their own future.

They are part of a high-tech version of the ancient tradition of apprentices learning a trade requiring specialized skills by working with experienced professionals on the job. PPPL, a DOE national laboratory, has partnered with the New Jersey Department of Labor and Workforce Development to offer young people four years of technical classes and hands-on training as electrical, electronic and mechanical technicians working on plasma physics and fusion energy research experiments.

Those technicians will be helping develop fusion energy as a clean, abundant and safe method of generating electric energy for all humankind. In a July 16 press release announcing the program, New Jersey Gov. Phil Murphy said he sees it as part of a broader effort to grow the New Jersey Apprenticeship Network. Murphy has touted the program as fitting in with his vision for developing New Jersey’s technology-based industries in its innovation economy. 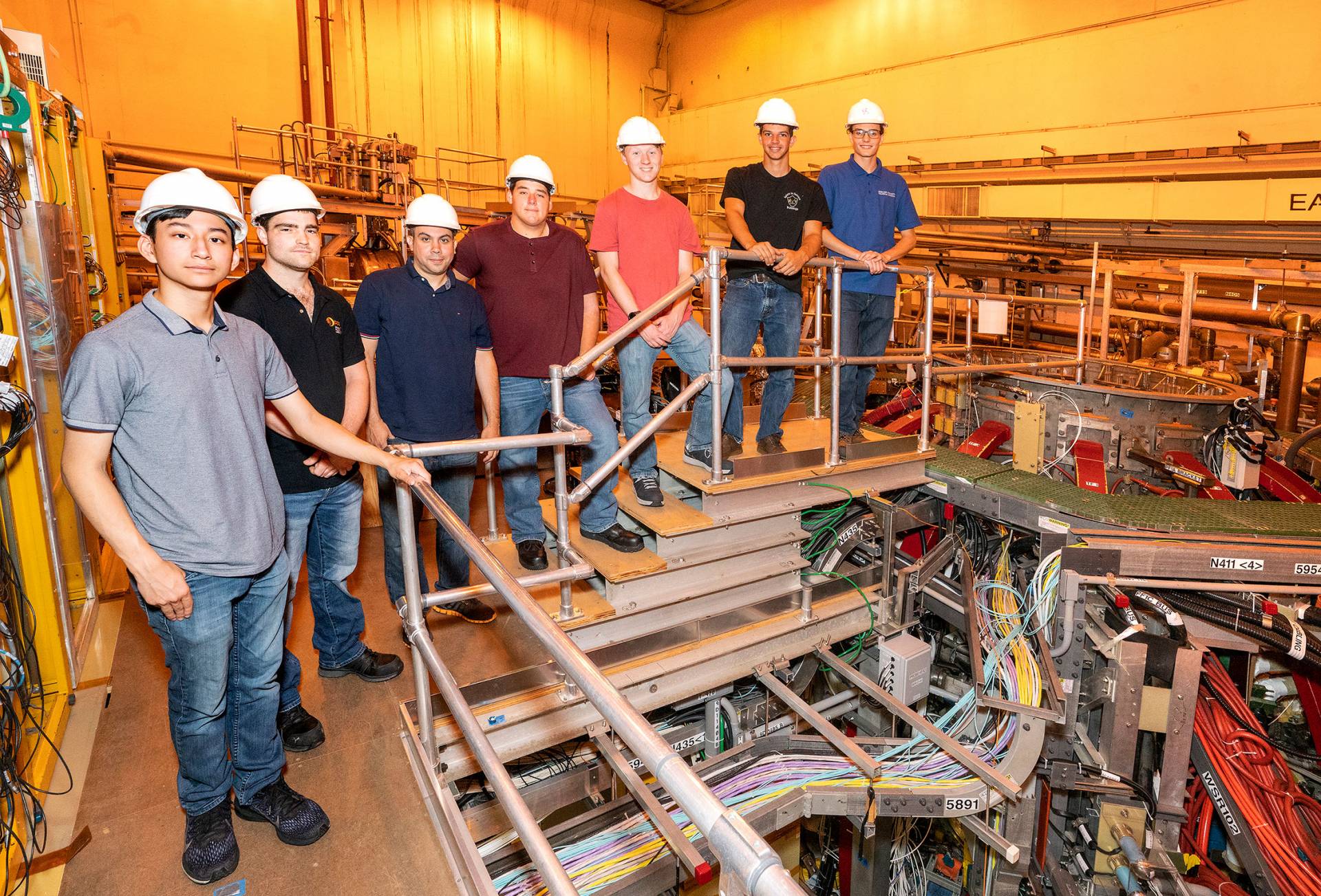 “We are proud to offer this innovative and important program, which will give talented young people excellent on-the-job training and mentorship at a national laboratory,” said Steven Cowley, PPPL director. “They will help us carry out our mission of developing fusion as a clean, safe and abundant source of electric energy. It is indeed a grand technical challenge that could potentially change the world, and we are excited to be part of the state’s innovation economy envisioned by the governor.”

Cowley, who worked with apprentices at the Culham Centre for Fusion Energy in the United Kingdom, where he previously was a director, wanted to implement the model at PPPL. Valeria Riccardo, PPPL head of engineering, who also worked at Culham, was the prime organizer for the apprenticeship program. She said the idea is close to her heart because both her husband and father were apprentices early in their careers in Europe. “I’m excited,” she said. “We would like to have the opportunity to grow our own talent and keep the talent and have [the participants] learn some of the things that are unique to PPPL.”

The pre-apprenticeship program lasts six weeks, from July through mid-August. The pre-apprentices arrive at work early in the morning to spend their day shadowing technicians and take in a flow of information that one participant compared to “a firehose.” The rotations are built around the area in which they’re specializing.

Being part of PPPL’s mission

A major draw for the participants is the opportunity to be part of PPPL’s mission to develop fusion energy. As Cole Widman, of Hopewell, New Jersey, puts it, “Being part of the mission that could change the world and change the way people live, that’s really special.”

Robert Bongiovanni, of Hamilton, New Jersey, took vocational training at Mercer County Technical School and has done apprenticeships in HVAC, plumbing and electrical trades. PPPL’s pre-apprenticeship program stands out, he said, because trained supervisors and other technicians take the time to explain what they’re doing. “The people are great and the work experience is like nothing I’ve ever had,” Bongiovanni said. 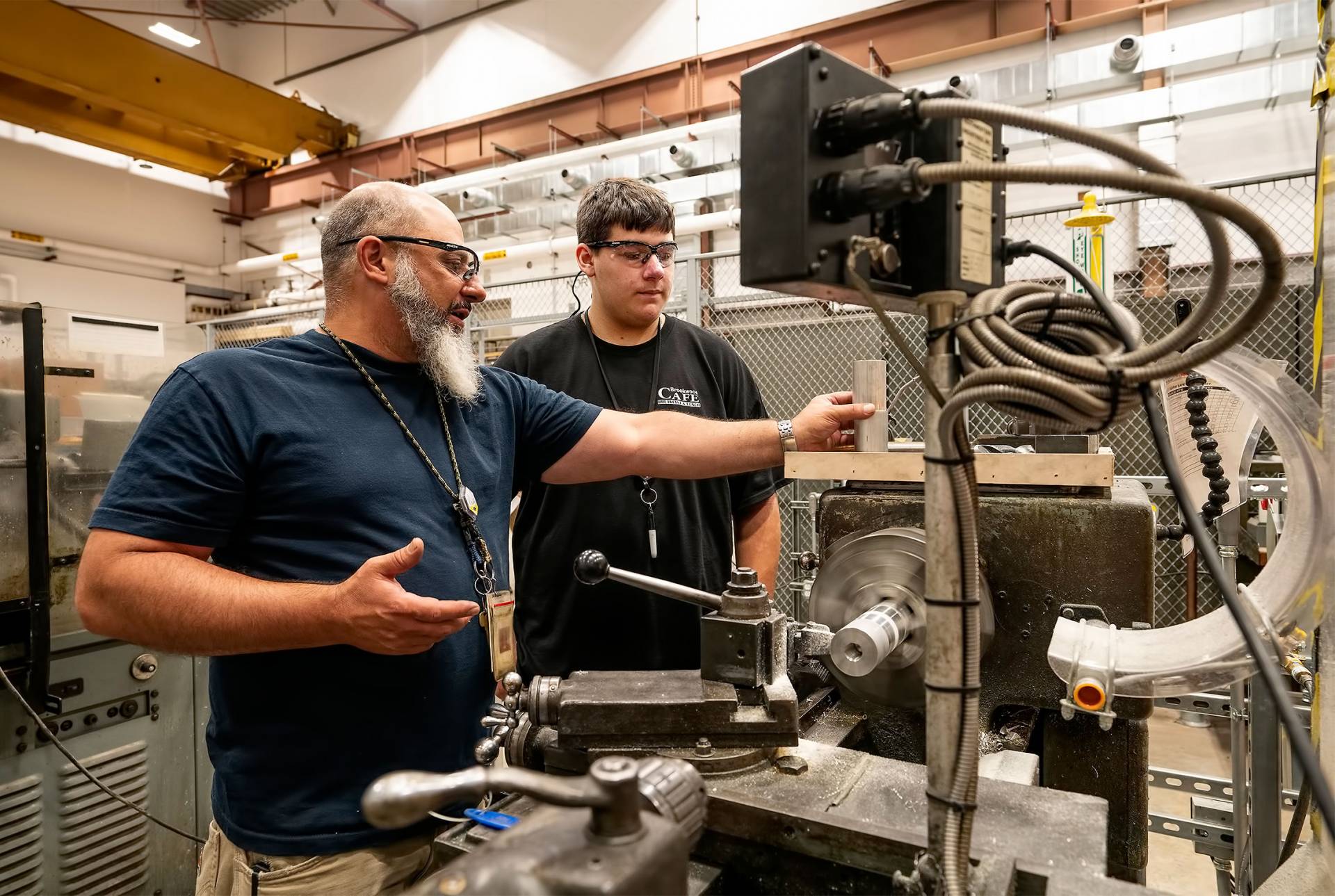 Tom Guttadora, a technician in the machine shop, demonstrates to Bongiovanni how to use a lathe on an aluminum component.

Most of the group went to vocational school in high school or have some technological background. One has a bachelor’s degree in business, while another has an associate degree in liberal arts. But their technical experience and skills will carry the most weight in applying for the apprentice program, Riccardo said.

In addition to Riccardo, Al Von Halle, retired head of electrical engineering, was the “champion of the program,” Riccardo said. Andrea Moten, deputy director of human resources, also helped organize the program.  “I’m really excited for them that they have such a wonderful opportunity,” said Andy Carpe, an engineering associate who is the program administrator. “They’re going to be exposed to technologies that they won’t get anywhere else.”

Aaron Floyd, of Lawrenceville, New Jersey, said he graduated from high school in 2015 and tried a four-year college but it wasn’t for him. He then went to Mercer Community College and took night classes at Mercer Technical School while working for a contractor in Princeton. He said he was willing to quit his job for the opportunity to apply for the four-year apprenticeship and he isn’t intimidated by the four-year commitment. “It’s definitely worth the four years,” he said. “The knowledge you’re going to have is so unique and so special. You’re working on so many different machines and you’re learning skills that could only really apply to PPPL.”

When they begin the program in September, the apprentices will have a busy schedule prescribed by the state's labor department, with 8,000 hours of on-the-job training and 576 hours of coursework through the Mercer County Technical School. They will receive competitive pay and Princeton University benefits and will have the opportunity to apply for jobs when they complete the program. Their classes will be funded by the New Jersey Department of Labor and Workforce Development. The pilot program will continue over the next several years with more apprentices added each year.

While working at PPPL, the apprentices will get to work on electrical systems, electronics and components for numerous experiments. These could include not only PPP’s main experiment, a fusion device called the National Spherical Torus Experiment — Upgrade (NSTX-U), but may also work on other research efforts at PPPL, such as the Facility for Laboratory Reconnection Experiment (FLARE), a new experiment that is being built this year to study magnetic reconnection; PPPL’s Lithium Tokamak Experiment-ß, and components for ITER, the international experiment under construction in France.

“This is a world-class science experience they can be part of,” said Shannon Swilley Greco, a science education senior program associate who has been one of the key people recruiting applicants into the program. “The level of machines and precision work is at a level you won’t find at other institutions. This is a way to develop New Jersey’s workforce.”

“Bringing apprenticeship to the leader in scientific research proves that this earn-while-you-learn model has far-reaching capabilities across all industries looking to development pipelines of talent,” said New Jersey Labor Commissioner Robert Asaro-Angelo in the labor department’s press release. “We are proud to work with our partners at the USDOL to support New Jersey’s young minds, as we continue our state’s rich history of innovation.”

PPPL, on Princeton University's Forrestal Campus in Plainsboro, New Jersey, is devoted to creating new knowledge about the physics of plasmas — ultra-hot, charged gases — and to developing practical solutions for the creation of fusion energy. PPPL is managed by the University for the U.S. Department of Energy’s Office of Science, which is the single largest supporter of basic research in the physical sciences in the United States and is working to address some of the most pressing challenges of our time.