Physicists from the U.S. Department of Energy's Princeton Plasma Physics Laboratory (PPPL) have discovered a possible solution to a mystery that has long baffled researchers working to harness fusion. If confirmed by experiment, the finding could help scientists eliminate a major impediment to the development of fusion as a clean and abundant source of energy for producing electric power.

An in-depth analysis by PPPL scientists zeroed in on tiny, bubble-like islands that appear in the hot, charged gases — or plasmas — during experiments. These minute islands collect impurities that cool the plasma. And these islands, the scientists report in the April 20 issue of the journal Physical Review Letters, are at the root of a longstanding problem known as the "density limit" that can prevent fusion reactors from operating at maximum efficiency.

Fusion occurs when plasmas become hot and dense enough for the atomic nuclei contained within the hot gas to combine and release energy. But when the plasmas in experimental reactors called tokamaks reach the mysterious density limit, they can spiral apart into a flash of light.

"The big mystery is why adding more heating power to the plasma doesn't get you to higher density," said David Gates, a principal research physicist at PPPL and co-author of the proposed solution with Luis Delgado-Aparicio, a postdoctoral fellow at PPPL and a visiting scientist at the Massachusetts Institute of Technology's Plasma Science Fusion Center. "This is critical because density is the key parameter in reaching fusion and people have been puzzling about this for more than 30 years." 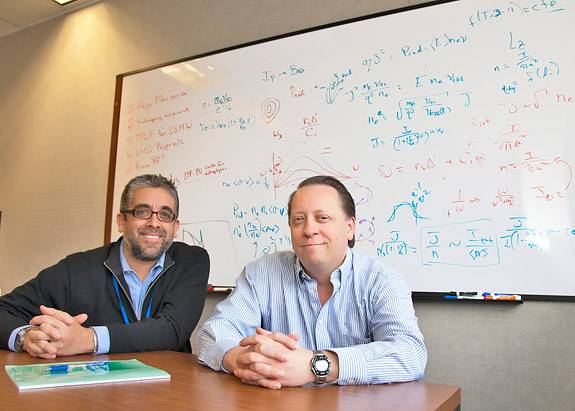 A discovery by Princeton Plasma Physics Laboratory physicists Luis Delgado-Aparicio (left) and David Gates could help scientists eliminate a major impediment to the development of fusion as a clean and abundant source of energy for producing electric power. Listen to a podcast with the scientists discussing their discovery.(Photo by Elle Starkman)

The scientists hit upon their theory in what Gates called "a 10-minute 'Aha!' moment." Working out equations on a whiteboard in Gates' office, the physicists focused on the islands and the impurities that drive away energy. The impurities stem from particles that the plasma kicks up from the tokamak wall. "When you hit this magical density limit, the islands grow and coalesce and the plasma ends up in a disruption," said Delgado-Aparicio.

These islands actually inflict double damage, the scientists said. Besides cooling the plasma, the islands act as shields that block out added power. The balance tips when more power escapes from the islands than researchers can pump into the plasma through a process called ohmic heating — the same process that heats a toaster when electricity passes through it. When the islands grow large enough, the electric current that helps to heat and confine the plasma collapses, allowing the plasma to fly apart.

Gates and Delgado-Aparicio now hope to test their theory with experiments on a tokamak called Alcator C-Mod at MIT, and on the DIII-D tokamak at General Atomics in San Diego. Among other things, they intend to see if injecting power directly into the islands will lead to higher density. If so, that could help future tokamaks reach the extreme density and 100-million-degree temperatures that fusion requires.

The scientists' theory represents a fresh approach to the density limit, which also is known as the "Greenwald limit" after MIT physicist Martin Greenwald, who has derived an equation that describes it. Greenwald has another potential explanation for the source of the limit. He thinks it may occur when turbulence creates fluctuations that cool the edge of the plasma and squeeze too much current into too little space in the core of the plasma, causing the current to become unstable and crash. "There is a fair amount of evidence for this," Greenwald said. However, he added, "We don't have a nice story with a beginning and end and we should always be open to new ideas."

Gates and Delgado-Aparicio pieced together their model from a variety of clues that have developed in recent decades. Gates first heard of the density limit while working as a postdoctoral fellow at the Culham Centre for Fusion Energy in Abingdon, England, in 1993. The limit had previously been named for Culham scientist Jan Hugill, who described it to Gates in detail.

Separately, papers on plasma islands were beginning to surface in scientific circles. French physicist Paul-Henri Rebut described radiation-driven islands in a mid-1980s conference paper, but not in a periodical. German physicist Wolfgang Suttrop speculated a decade later that the islands were associated with the density limit. "The paper he wrote was actually the trigger for our idea, but he didn't relate the islands directly to the Greenwald limit," said Gates, who had worked with Suttrop on a tokamak experiment at the Max Planck Institute for Plasma Physics in Garching, Germany, in 1996 before joining PPPL the following year.

In early 2011, the topic of plasma islands had mostly receded from Gates' mind. But a talk by Delgado-Aparicio about the possibility of such islands erupting in the plasmas contained within the Alcator C-Mod tokamak reignited his interest. Delgado-Aparicio spoke of corkscrew-shaped phenomena called snakes that had first been observed by PPPL scientists in the 1980s and initially reported by German physicist Arthur Weller.

Intrigued by the talk, Gates urged Delgado-Aparicio to read the papers on islands by Rebut and Suttrop. An email from Delgado-Aparicio landed in Gates' inbox some eight months later. In it was a paper that described the behavior of snakes in a way that fit nicely with the C-Mod data. "I said, 'Wow! He's made a lot of progress,'" Gates remembered. "I said, 'You should come down and talk about this.'"

What most excited Gates was an equation for the growth of islands that hinted at the density limit by modifying a formula that British physicist Paul Harding Rutherford had derived back in the 1980s. "I thought, 'If Wolfgang (Suttrop) was right about the islands, this equation should be telling us the Greenwald limit," Gates said. "So when Luis arrived I pulled him into my office."

Then a curious thing happened. "It turns out that we didn't even need the entire equation," Gates said. "It was much simpler than that." By focusing solely on the density of the electrons in a plasma and the heat radiating from the islands, the researchers devised a formula for when the heat loss would surpass the electron density. That in turn pinpointed a possible mechanism behind the Greenwald limit.

Delgado-Aparicio became so absorbed in the scientists' new ideas that he missed several turnoffs while driving back to Cambridge, Mass., that night. "It's intriguing to try to explain Mother Nature," he said. "When you understand a theory you can try to find a way to beat it. By that I mean find a way to work at densities higher than the limit."

Conquering the limit could provide essential improvements for future tokamaks that will need to produce self-sustaining fusion reactions, or "burning plasmas," to generate electric power. Such machines include proposed successors to ITER, a $20 billion experimental reactor that is being built in Cadarache, France, by the European Union, the United States and five other countries.

Why hadn't researchers pieced together a similar theory of the density-limit puzzle before? The answer, said Gates, lies in how ideas percolate through the scientific community. "The radiation-driven islands idea never got a lot of press," he said. "People thought of them as curiosities. The way we disseminate information is through publications, and this idea had a weak initial push."

PPPL, in Plainsboro, N.J., is devoted both to creating new knowledge about the physics of plasmas — ultra-hot, charged gases — and to developing practical solutions for the creation of fusion energy. Through the process of fusion, which is constantly occurring in the sun and other stars, energy is created when the nuclei of two lightweight atoms, such as those of hydrogen, combine in plasma at very high temperatures. When this happens, a burst of energy is released, which can be used to generate electricity.

PPPL is managed by Princeton University for the U.S. Department of Energy's Office of Science.