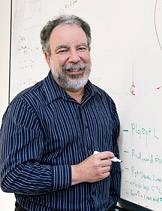 A top scientist at the U.S. Department of Energy's Princeton Plasma Physics Laboratory (PPPL) has developed a model for predicting the outflow of heat during fusion experiments, which may help overcome a key barrier to the fusion process.

The model designed by Robert Goldston, a Princeton professor of astrophysical sciences and former PPPL director, predicts the width of what physicists call the "scrape-off layer" in tokamaks, the most widely used fusion facilities. Such devices confine hot, electrically charged gas, or plasma, in powerful magnetic fields. But heat inevitably flows through the system and becomes separated, or scraped off, from the edge of the plasma and flows into an area called the divertor chamber.

The challenge is to prevent the thin and highly concentrated layer of heat from reaching and damaging the plate that sits at the bottom of the divertor chamber and absorbs the scrape-off flow in fusion facilities. Such damage would halt fusion reactions, which take place when the atomic nuclei, or ions, inside the plasma merge and release energy. "If nothing was done and you took this right on the chin, it could be a knockout blow," said Goldston, who published his model in January in the journal Nuclear Fusion.

"This [model] allows you to depict the size of the challenge so you can think through what needs to be done to overcome it," Goldston said.

Goldston was among physicists who recently presented aspects of the model at the 20th Annual International Conference on Plasma Surface Interactions in Aachen, Germany. Some 400 researchers from around the world attended the conference. Results of the model have been "eerily close" to the data from actual fusion experiments, said Thomas Eich, a senior scientist at the Max Planck Institute for Plasma Physics in Garching, Germany, who gave an invited talk on his measurements of scrape-off layers. The agreement appears too close to have happened by chance, Eich added.

Solving the heat layer problem will be vital for future machines like ITER, the world's most powerful tokamak, which the European Union, the United States and five other countries are building in France to demonstrate fusion as a source of clean and abundant energy. The project is designed to produce 500 megawatts of fusion power in 400-second-long pulses, which will require researchers to spread the scrape-off heat as much as possible to protect the divertor plate.

Goldston's model could help guide such efforts. He began pondering the width of the heat flux during a physics conference in South Korea in 2010. Looking at the latest scrape-off layer data based on improved measurements, he estimated — literally on an envelope — that the new widths could be produced without plasma turbulence, a factor that is typically considered but is notoriously difficult to calculate. This led him to search for a way to estimate the width of the surprisingly thin layer, and to gauge how the width would vary as conditions such as the amount of electrical current in the plasma varied.

The way plasma flows inside tokamaks provided the major clue. The ions within the charged gas gyrate swiftly along the magnetic field lines while drifting slowly across the lines. At the same time, the electrons also in the plasma travel very rapidly along the lines and carry away most of the heat. Goldston arrived at his prediction by determining how fast these subatomic particles flow into the divertor region, and how long it therefore takes them to reach it. The result "is what we call a 'heuristic' estimate, based on the key aspects of the physics, but not a detailed calculation," Goldston said.

His estimate confirmed what Goldston had suspected: The width of the scrape-off layer nearly matched the results of a calculation, made without considering turbulence, for determining how far the ions drift away from their field lines. "What's stunning is how closely the values correspond to the data, both in absolute value and in variation with the plasma current, magnetic field, machine size and input power," Goldston said. "This does not mean that turbulence plays no role, but it suggests that for the highest performance conditions, where turbulence is weakest, the motion of the ions is dominated by non-turbulent drift effects." This will be true in the case of ITER, he added, since it is designed to operate in high-performance conditions.

Researchers are developing techniques for widening the scrape-off layer. Such methods include pumping gas into the divertor region to keep some heat from reaching the plate. Physicists use deuterium, a form of hydrogen, to block the heat, and are injecting nitrogen to turn other parts of the heat into ultraviolet light. (While charged deuterium ions are already in the plasma, the deuterium gas that is injected into the divertor region to block the heat is not electrically charged.)

These strategies look promising. "We know that they will work," Goldston said. "The outstanding question is whether they will work completely enough" to mitigate the heat flux at ITER's highest power levels, without introducing so much gas that it cools the fuel. Physicists around the world are conducting experiments to understand the process better.

For Goldston, calculating the width of the scrape-off layer marks the latest research effort in a 40-year career at PPPL, which began when he was a graduate student. Along the way he helped pioneer techniques for heating the plasma, and developed a widely used method called "Goldston scaling" for predicting how long heat is retained in a tokamak plasma.

"First, heat is injected into the plasma," Goldston said of how tokamaks operate. "Second, that heat is retained while much more heat is generated by fusion reactions. Finally, the resulting heat has to come out of the plasma. Without thinking about it, I have been following heat along this trajectory throughout my whole research career," he added. "We have made great progress on the first two steps, and now the most exciting challenge, to me, is the one that comes because of our success so far. Now we need to learn to handle the the outflow of heat from a high-power fusion energy source."

PPPL, funded by the U.S. Department of Energy and managed by Princeton University, advances the coupled fields of fusion energy and plasma physics. Fusion is the process that powers the sun and the stars. In the interior of stars, matter is converted into energy by the fusion, or joining, of the nuclei of light atoms to form heavier elements. At PPPL, physicists use a magnetic field to confine plasma. Scientists hope eventually to use fusion energy to generate electricity.