A major effort to study a mysterious substance that could enhance understanding of the cosmos and fusion energy has received a critical boost from the U.S. Department of Energy's Princeton Plasma Physics Laboratory (PPPL).

Scientists at PPPL have designed and delivered a crucial component for a device that can heat a spot of foil to 30,000 degrees Centigrade in less than a billionth of a second. The part will complete a linear accelerator that researchers at the E.O. Lawrence Berkeley National Laboratory are using to create a superheated state called "warm dense matter." 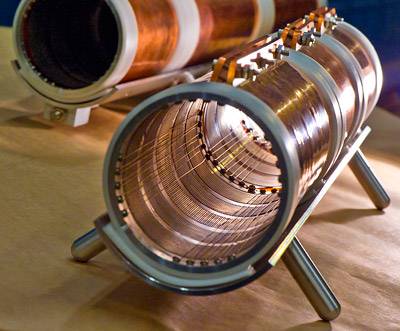 Scientists at the Princeton Plasma Physics Laboratory (PPPL) have created a plasma source the size of a hand telescope that will serve as a critical component of a linear accelerator at the E.O. Lawrence Berkeley National Laboratory. The accelerator will create a superheated state called "warm dense matter," which intrigues physicists studying the cosmos and scientists who are seeking to harness fusion to produce clean electric power. (Photo by Roy Kaltschmidt, E.O. Lawrence Berkeley National Laboratory)

Researchers are eager to study this substance, which is rarely seen on Earth but common throughout the universe. Warm dense matter can be found in the molten core of giant planets like Jupiter, and in the preliminary stages of fusion, a process that powers the sun and stars. Such matter intrigues physicists studying the cosmos and scientists including those at PPPL who are seeking to harness fusion to produce clean electric power.

For PPPL physicist Erik Gilson, the crucial component marks the third generation of parts called plasma sources that he has created for Berkeley Lab accelerators since 2001. Gilson serves as principal plasma source designer for the accelerator experiments, which are part of the Heavy Ion Fusion Science Virtual National Laboratory, a joint venture of PPPL, Berkeley Lab and Lawrence Livermore National Laboratory.

Gilson's latest plasma source is a copper-clad, 43-inch cylinder the size of a hand telescope. It upgrades the version he designed for the previous Berkeley Lab accelerator while retaining that source's core — modules made from 1.6-inch-long rings of barium titanate ceramic. The material produces a swarm of positively charged atomic nuclei — or ions — and negatively charged electrons at its surface when a high voltage is applied to it. This combination of ions and electrons constitutes a plasma.

A bit of mystery surrounds where these ions come from. "The mechanism isn't completely understood," Gilson said. "It could be absorbed gas on the surface of the modules. But whatever fuel you have is what you brought with you when the parts were installed."

The 10-meter-long accelerator at Berkeley Lab, known as the Neutralized Drift Compression Experiment-II (NDCX-II), is expected to begin full-scale operation this fall. The device will send a beam of charged lithium ions through a series of electromagnetic induction cells that will accelerate and compress the beam, turning it from a javelin-like projectile into one that resembles a tiny comet. The highly compressed beam will heat a target made of a custom-designed foil, producing the warm dense matter that instruments can analyze in the instant before the target vaporizes. 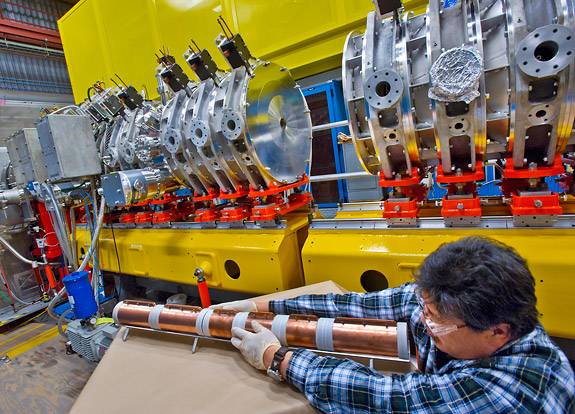 A technician at the Berkeley Lab, Takeshi Katayanagi, aligns the PPPL-designed plasma source. The device is a key component of the Neutralized Drift Compression Experiment-II, which is shown in the background and is expected to begin full-scale operation this fall. (Photo by Roy Kaltschmidt, E.O. Lawrence Berkeley National Laboratory)

The target material is not like kitchen foil. It measures four one-hundredths of an inch in diameter and is less than a micron thick, making it more than 10 times as thin as the foil that might be used to wrap warm leftovers. It can be made from many materials including gold, tungsten, carbon or even a metallic foam.

Without the PPPL-designed device, the intense NDCX-II beam would rapidly expand into the beam tube walls before reaching the target. Gilson's plasma source will create an electrically charged plasma to fill the penultimate stage of the accelerator called the drift line. Electrons in the plasma will neutralize the positively charged ion beam after it leaves the accelerator and zips through the drift line on its way to the target chamber. This neutralization is needed to keep the beam from dispersing, since particles with the same charge would repel one another.

Gilson's device incorporates advances over the plasma source he designed for the previous Berkeley Lab accelerator, the NDCX-I. The biggest change involved connecting a separate 10,000-volt electric power supply to each barium titanate module. This enables researchers to regulate power all along the device and deliver added power to modules that might need it. By contrast, the NDCX-I plasma source connected four or five modules to a single power supply and was unable to regulate the power to individual modules.

The new device rounds out a particle accelerator that has hundreds of times more heating power than the NDCX-I, which was operated by scientists in the mid-2000s. The NDCX-II will compress bunches of about 200 billion lithium ions so rapidly that the tail of the beam will overtake the head in the drift line, condensing the beam to deliver the maximum heating punch. "What makes NDCX-II unique is the beam's charged-particle density," said Joe Kwan, Berkeley Lab project manager for the new accelerator.

Construction of the NDCX-II began in 2009 with $11 million from the American Recovery and Reinvestment Act, the stimulus program that Congress passed that year. Experiments on the accelerator will complement research under way at the National Ignition Facility (NIF), part of the Lawrence Livermore National Laboratory. Scientists at NIF are seeking to produce fusion by imploding hydrogen fuel capsules with the world's most powerful laser beams in a process called inertial confinement. At the same time, Berkeley Lab researchers have been studying ion beams for the possible production of fusion through the same process.

PPPL is funded by the U.S. Department of Energy's Office of Science and managed by Princeton University.