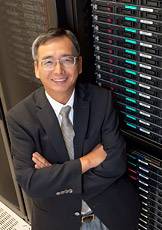 C.S. Chang, who heads the Center for Edge Physics Simulation at the Princeton Plasma Physics Lab, poses by a high-performance computer cluster at the laboratory. With a $12.25 million grant from the U.S. Department of Energy, Chang and other researchers will develop computer codes to simulate a key component of the plasma that fuels fusion energy.

A center based at the U.S. Department of Energy's (DOE) Princeton Plasma Physics Laboratory (PPPL) has won a highly competitive $12.25 million grant to develop computer codes to simulate a key component of the plasma that fuels fusion energy. The five-year DOE award could produce software that helps researchers design and operate facilities to create fusion as a clean and abundant source of energy for generating electricity.

The grant comes from the Scientific Discovery through Advanced Computing (SciDAC) program supported by the DOE Office of Science.

The grant will go to PPPL's Center for Edge Physics Simulation (EPSI) headed by C.S. Chang, a principal research physicist. The award will fund an advanced computer simulation of the complex and turbulent conditions at the edge of the plasma, the hot, electrically charged gas that scientists confine inside magnetic fields in facilities called tokamaks. Controlling the little-understood plasma edge is crucial for maintaining the confinement so that fusion can take place.

"The DOE grant is terrific for the laboratory because it allows us to work in the forefront of the simulation of the edge region of fusion plasmas," said PPPL Director Stewart Prager. "This code could go a long way toward modeling and understanding this pivotal region."

The task of confining fusion plasma has everyday parallels, noted Chang. "If you want to confine soup, the bowl should not leak, wobble or be broken by the heat," said Chang, who joined PPPL in 2011, from the Korea Advanced Institute of Science and Technology and the Courant Institute of Mathematical Sciences at New York University.

The EPSI team will work on Titan, a Cray XK6 supercomputer that is one of the world's fastest scientific computing systems, which is housed at Oak Ridge National Laboratory. Titan is expected to have a peak performance of more than 20 petaflops — the technical term for a million billion calculations a second. The machine will have the combined power of well over 2 million home computers and the ability to perform in one day what a single desktop device would take more than 5,000 years to complete. The EPSI team also will work on Hopper, a Cray XE6 supercomputer at the DOE's E.O. Lawrence Berkeley National Laboratory.

The new computer code will build on software created by a previous Chang-directed center, the Center for Plasma Edge Simulation. The new code will seek to model the harsh pressure, temperature, density and flow conditions that mark the edge of intensely hot fusion plasmas, and cause them to grow unstable, leak from their magnetic confinement and damage tokamak walls.

The EPSI researchers will test their model against data gleaned from actual fusion experiments to see if the model's predictions are accurate. "If the code proves to be validated for all the relevant aspects of today's experiments, then we would have the confidence to project it for the future," Chang said.

The validated model could serve as a guide to developers of next-generation fusion facilities, which will need to confine hot plasmas at temperatures of over 100 million degrees and cope with extreme heat fluxes against their walls. Such facilities include ITER, the huge tokamak that the European Union, the United States and five other countries are building in Cadarache, France. Plans call for ITER to produce 500 million watts of fusion energy for up to 500 seconds by the late 2020s.

Efforts such as the EPSI project would thus serve as a pathway to fusion power.

PPPL, in Plainsboro, N.J., is devoted to creating new knowledge about the physics of plasmas — ultra-hot, charged gases — and to developing practical solutions for the creation of fusion energy. Through fusion, which is constantly occurring in the sun and other stars, energy is created when the nuclei of two lightweight atoms, such as those of hydrogen, combine in plasma at very high temperatures. When this happens, a burst of energy is released, which can be used to generate electricity.

PPPL is managed by Princeton University for the U.S. Department of Energy's Office of Science, which is the largest supporter of basic research in the physical sciences in the United States.