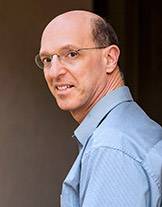 Eliot Feibush, a computational scientist at the Princeton Plasma Physics Laboratory, will lead a new University consortium that will share efforts to turn scientific data into computer visualizations.

If a picture is worth a thousands words, a computer graphic is worth millions. With that in mind, Princeton University has formed a consortium that will share efforts to turn mountains of scientific data into eye-friendly computer visualizations.

The Princeton Plasma Physics Laboratory (PPPL) has named Computational Scientist Eliot Feibush to lead the consortium. Joining PPPL in this venture are the Princeton Institute for Computational Science and Engineering (PICSciE) and the Geophysical Fluid Dynamics Laboratory (GFDL), institutions whose research ranges from exploring supernovae and the interior of the Earth to predicting climate variability and change.

"People are modeling ever-larger and more complex processes," said Feibush, who heads the development of web-based software for imaging data from fusion experiments at PPPL, a position he continues to hold. "Visualization is a way to see all the data in a human way and produce new scientific insights." 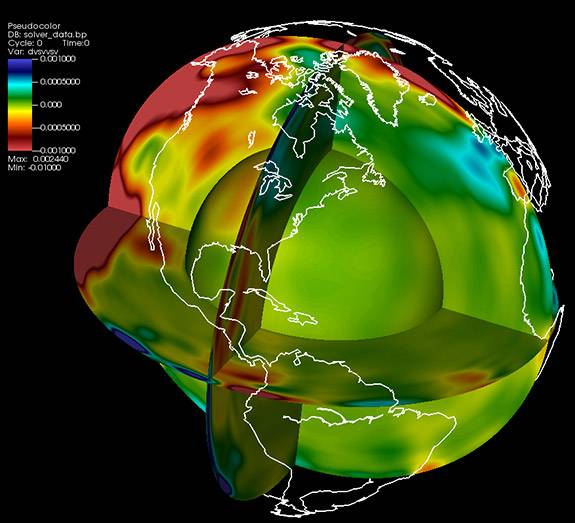 This visualization maps the speed of seismic waves and is an example of the type of work the collaboration will support. (Image courtesy of Ebru Bozdağ, University of Nice Sophia Antipolis, and David Pugmire, Oak Ridge National Laboratory)

As technical leader of the collaboration, Feibush will develop software tools for importing data into visualizations and will tutor researchers from graduate students to faculty members on using the tools. Programs will be stored on a remote server from which they can be readily launched from desktop or laptop computers.

"The main purpose is to coordinate and share knowledge among institutes working on common tasks," said James Stone, professor of astrophysical sciences and applied and computational mathematics and director of PICSciE, an interdisciplinary institute. PICSciE provides hardware, technical support and educational and outreach programs in computational and information science in collaboration with the Princeton Office of Information Technology's Research Computing department. "Visualization is something we all need to do," Stone said.

Colleagues welcomed the new consortium. "This is a fabulous opportunity to share hardware and human resources,” said Jeroen Tromp, the Blair Professor of Geology and a professor of geosciences and applied and computational mathematics and associate director of PICSciE. "Everybody has been developing their own visualization solutions, but this model of independent development is no longer sustainable because the data volumes have become too large." 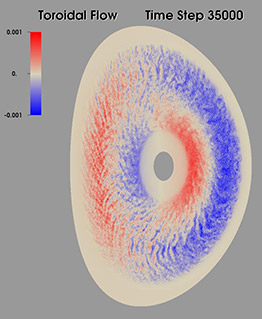 This image is of a cross section of a tokamak plasma with red and blue colors showing direction and structure of plasma flow. (Image courtesy of the Princeton Plasma Physics Laboratory)

At GFDL, a laboratory of the National Oceanic and Atmospheric Administration located on the Forrestal Campus, Deputy Director Brian Gross applauded the new coalition. "All scientific agencies look for the best ways to depict very large amounts of data through visualization," he said, "and this will mean access to shared expertise." GFDL partners with Princeton University through the Cooperative Institute for Climate Science, which is housed in the Program in Atmospheric and Oceanic Sciences in Princeton's Department of Geosciences. The collaboration will help scientists develop visualizations like the animated GFDL visualization of climate change.

Among benefits of the collaboration will be tutelage by Feibush in programs such as Visualization Toolkit software, an advanced method for visualizing data. Trained use of the program can enable researchers with little prior experience with the software to distill massive amounts of data into clear and concise imagery.

Several projects at PPPL will gain from such broadened access to visualization software and savvy. They include a scientific code that physicist Seung-Hoe Ku runs on two of the world's most powerful supercomputers to study turbulence at the volatile edge of fusion plasmas. Also expected to benefit are physicist Weixing Wang, who seeks advanced visualization of the data from turbulence simulation runs, and physicists Josh Breslau and Steve Jardin, who use animated visualizations to help interpret the output of their magnetohydrodynamic codes, which treat plasma as a magnetic fluid.

The consortium grew from a proposal that Bill Tang, a principal research physicist at PPPL, former associate director of PICSciE and current member of the PICSciE executive committee, put forth at the group's executive meeting last fall. "I pointed out that PICSciE and GFDL could both make significantly better use of modern visualization capabilities," Tang said. Moreover, he added, the collaboration stood to enhance PPPL's effort to engage in mutually beneficial cooperative ventures with the main campus.