The global ocean is the Earth's heating and cooling system, pushing balmy tropical waters toward the poles and bringing back colder, nutrient-rich waters. But modeling this system is extremely complex, resulting in billions of data points.

To tackle the complexity, researchers at three Princeton-area institutions have transformed complex modeling data into an easily understandable animated movie showing how ocean temperatures and saltiness change over time. The animation could help climate researchers explore how factors such as rising carbon dioxide levels alter the ocean's ability to transport heat.

The animation illustrates the power of visualization techniques for presenting complex data in ways that are readily understandable, said Eliot Feibush, leader of the Princeton Visualization Consortium, which brings together researchers from the University's Princeton Institute for Computational Science and Engineering (PICSciE), the U.S. Department of Energy's Princeton Plasma Physics Laboratory (PPPL), and the U.S. Department of Commerce's National Oceanic and Atmospheric Administration's Geophysical Fluid Dynamics Laboratory (GFDL).

A new video animation demonstrates the power of data visualization techniques to make sense of vast amounts of information. The animation, which reveals how ocean temperatures and salinity change over the course of a year, is based on data from global climate models. These models aid our understanding of the physical processes that create the Earth's climate, and inform predictions about future changes in climate. The video was created by researchers at Princeton University, the U.S. Department of Energy's Princeton Plasma Physics Laboratory, and the U.S. Department of Commerce's National Oceanic and Atmospheric Administration's Geophysical Fluid Dynamics Laboratory.

"People are working with increasing amounts of data in all areas of science, and they need better ways to evaluate their results," said Feibush, who divides his time between PPPL and PICSciE. "The techniques we developed are being applied to climate modeling but the methods can be used for other complex data sets that change over time," he said.

Data visualization techniques make it easier to comprehend information, spot trends and even identify mistakes, Feibush said. "Visualization helps us to understand complexity — it is more than just a pretty picture."

Matthew Harrison, a climate scientist at GFDL, worked with Feibush to adapt results of climate models into formats that could be used to generate the animation.

Climate models are computer programs that combine real-world observations of temperature, salinity, rainfall amounts and other factors with physical laws. The models can help researchers better predict long-term climate changes and short-term weather forecasts. "Understanding how heat moves through the ocean is essential for predicting the behavior of the climate we experience on land," Harrison said. 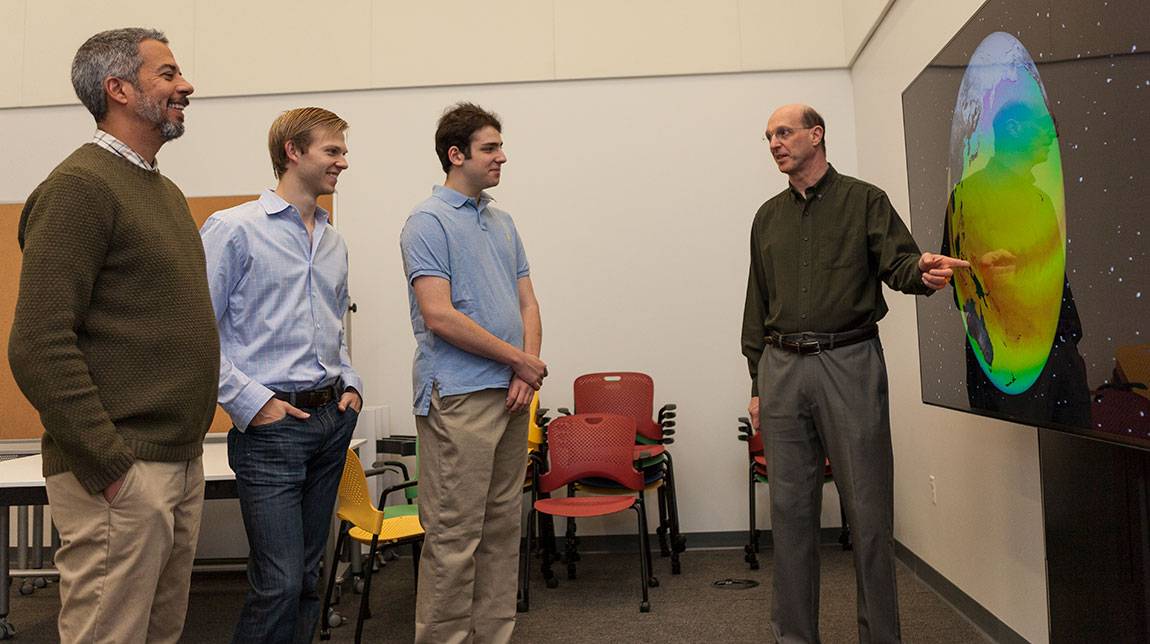 The collaboration to produce the video animation included, shown from left to right: Matthew Harrison, a climate scientist at the U.S. Department of Commerce's National Oceanic and Atmospheric Administration's Geophysical Fluid Dynamics Laboratory, who helped build the climate models; Princeton University undergraduates Matthew Lotocki, Class of 2017, and Zachary Stier, Class of 2020, who helped write the computer code that drives the animation; and Eliot Feibush, leader of the project and a computational scientist at the U.S. Department of Energy's Princeton Plasma Physics Laboratory and Princeton University. The photo was taken at the Princeton Institute for Computational Science and Engineering (PICSciE)'s Visualization Lab, which has recently been updated with new technology. (Photo by Nick Donnoli, Office of Communications)

The process starts when tropical waters soak up the sun's heat. Ocean currents push heated water toward the poles, warming not only the northern and southern oceans but also the air and land. This "ocean heat engine" makes northern Europe considerably more habitable than it otherwise would be.

In the North Atlantic, warm water from the tropics rides the Gulfstream extension northward toward the Norwegian Sea and mixes with cold water from the Arctic. Cold water is denser than warm water, so the mixed water sinks and makes its way eventually southward, bringing nutrients to fisheries off the coast of North America.

The water's saltiness, or salinity, plays a significant role in this ocean heat engine, Harrison said. Salt makes the water denser, helping it to sink. As the atmosphere warms due to global climate change, melting ice sheets have the potential to release tremendous amounts of fresh water into the oceans. Climate visualizations can help researchers see how the influx of fresh water affects global ocean circulation over time.

The animation reveals how factors like evaporation, rainfall and river runoff affect salinity. For example, the Mediterranean Sea, which lies in an arid region and has only a narrow outlet, is much saltier than the nearby Atlantic Ocean. In contrast, over 250 rivers flow into the Baltic Sea between mainland Europe and Scandinavia, so the sea is about seven-times less salty than the Atlantic Ocean.

One of the special aspects of this video animation is its high resolution, Harrison said. The simulation's resolution is six million pixels, which is like dividing up the world's ocean surface into a grid consisting of six million sectors. Each sector corresponds to an ocean area of about 10 kilometers on each side. The model calculates the temperature and salinity for each sector, which becomes a pixel, or a colored spot on the screen.

In the real world, weather conditions change from moment to moment. To capture this variability, GFDL's climate models incorporate weather conditions collected from ground stations and satellites to update the model hourly with near-surface wind speeds, temperature, rainfall and solar radiation. The calculations run on supercomputers at Oak Ridge National Laboratory in Tennessee.

"There is an art to handling large amounts of data," said Whit Anderson, deputy director of GFDL and himself an oceanographer. "You cannot just brute-force the large and complex data produced at facilities like GFDL and PPPL through a commercial product.

The video animation could help climate researchers explore how factors such as rising carbon dioxide levels alter the ocean's ability to transport heat. (Photo by Nick Donnoli, Office of Communications)

Feibush credits the project's success to his student interns, some who started on the visualization project at PPPL while in high school. "Without the students, this wouldn't have happened," Feibush said.

One of these students, Matthew Lotocki, started working with Feibush while a senior at the Bergen County Academy for Technology and Computer Science, a public magnet high school in New Jersey.

"It was an amazing opportunity," said Lotocki, a member of Princeton's Class of 2017. "You get to work with cutting-edge computer clusters and systems, really interesting projects, and with a mentor who teaches you how to make the tools to create really cool visualizations."

One of the challenges was figuring out how to combine different types of computer processors to work on the task. Today's scientists often take advantage of the power of video-game graphics processing units (GPUs) to do their computations. Lotocki had to get the GPU to do the calculations and generate the graphics on the screen. Another student intern, Michael Knyszek, who attends the University of California-Berkeley and who had an internship with Feibush as part of the Department of Energy Science Undergraduate Laboratory Internship program, programmed the GPU to combine layers of data.

The developers made the video animation look more realistic by incorporating NASA satellite data of the changing colors of the terrain to show typical seasonal changes. Zachary Stier, Princeton Class of 2020, also worked on the project as a student at the Bergen Academies. "A lot of the challenge was figuring out the right tools to address the questions we had at hand," Stier said. "There were some tasks for which there was no documentation for what we wanted to do."

The experience working at PPPL was one of the factors that influenced Stier's decision to come to Princeton. "I am much more able to look at a problem and do the research into what tools are available to attack the problem," he said.

The consortium combines three institutions, each with a different research focus. Princeton University is home to expert scientists in a wide range of disciplines. Scientists at PPPL, which is managed by Princeton University, are developing fusion energy, which involves creating charged gases known as plasmas in a confined reactor for safe and abundant sources of electricity. GFDL's expertise is climate modeling.

"Our organizations all work on very different things but one thing that we all have in common is the need to visualize large and complex data," Anderson said.

Funding was supplied by the U.S. Department of Energy and the National Science Foundation.