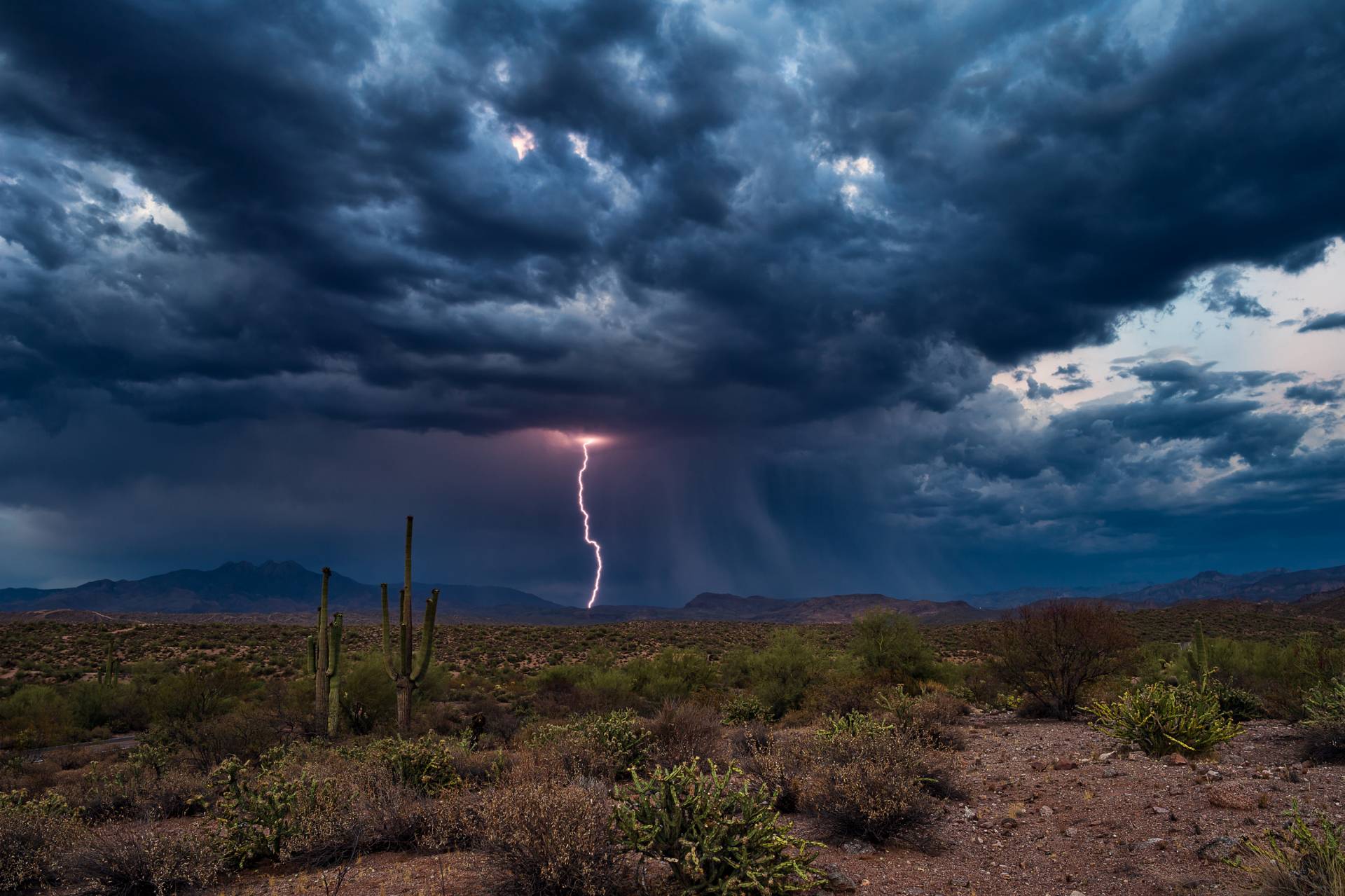 While previous researchers concluded that global warming was simply delaying the North American monsoon, a team of scientists at Princeton and the National Oceanic and Atmospheric Administration are using a new, high-resolution climate model that corrects for persistent sea-surface temperature biases and suggests that the dramatic summer rains of the southwestern U.S. and northwestern Mexico are facing significantly reduced rainfall totals.

Researchers have struggled to model accurately the changes to the abundant summer rains that sweep across the southwestern United States and northwestern Mexico, known to scientists as the “North American monsoon.”

In a report published Oct. 9 in the journal Nature Climate Change, a team of Princeton and National Oceanic and Atmospheric Administration (NOAA) researchers have applied a key factor in improving climate models — correcting for sea surface temperatures — to the monsoon. 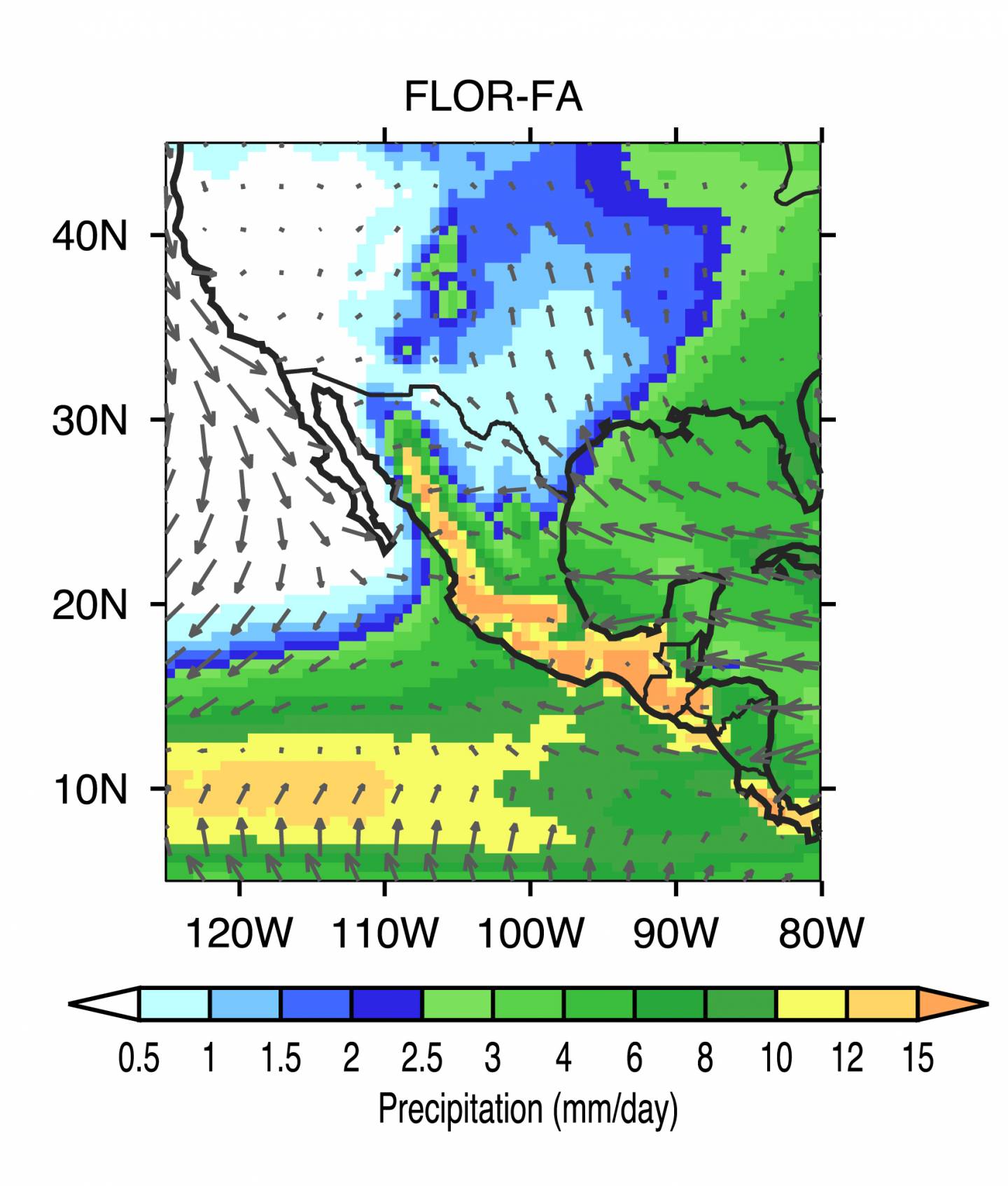 With a high-resolution model that accounts for errors in sea-surface temperatures, researchers were better able to capture regional features of the North American monsoon. This image represents the modeled mean precipitation for the southwestern U.S. and Central America in July and August, which represents the core of the monsoon season.

The report’s authors include Salvatore Pascale, an associate research scholar in atmospheric and oceanic sciences (AOS); Tom Delworth, a lecturer in geosciences and AOS and research scientist at NOAA’s Geophysical Fluid Dynamics Laboratory (GFDL); Sarah Kapnick, a 2004 Princeton alumna and former AOS postdoc who is currently a research physical scientist at GFDL; AOS associate research scholar Hiroyuki Murakami; and Gabriel Vecchi, a professor of geosciences and the Princeton Environmental Institute.

When they corrected for persistent sea-surface temperature (SST) biases and used higher-resolution data for the regional geography, the researchers created a model that accurately reflects current rainfall conditions and suggests that future changes could have significant consequences for regional water resources and hazards.

“This study represents fundamental science relating to the physics of the North American monsoon, but feeds back onto weather to climate predictions and building resiliency for our water supply and responses to hazards,” said Kapnick. “I am excited about this leap forward to improve our models and for the potential applications that they will provide in the future to society.”

Their results highlight the possibility of a strong precipitation reduction in the northern edge of the monsoon in response to warming, with consequences for regional water resources, agriculture and ecosystems.

“Monsoon rains are critical for the southwest U.S. and northwest Mexico, yet the fate of the North American monsoon is quite uncertain,” said Pascale, the lead author on the paper. “The future of the monsoon will have direct impacts on agriculture, on livelihoods.”

Previous general circulation models have suggested that the monsoons were simply shifting later, with decreased rains through July but increased precipitation in September and October.

“The consensus had been that global warming was delaying the monsoon … which is also what we found with the simulation if you didn’t correct the SST biases,” Pascale said. “Uncontrolled, the SST biases can considerably change the response. They can trick us, introducing artefacts that are not real.”

Once those biases were corrected for, the researchers discovered that the North American monsoon (NAM) is not simply delayed, but that the total precipitation is facing a dramatic reduction — up to 40 percent.

"Because much of the NAM region critically depends on summertime monsoonal rainfall, the results of [this research] underscore the necessity of planning future water resource management around the likelihood of reduced monsoonal rains," said Benjamin Lintner, an associate professor of environmental sciences at Rutgers University, who was not involved in this study.

That has significant implications for regional policymakers, explained Kapnick. “Water infrastructure projects take years to a decade to plan and build and can last decades. They require knowledge of future climate … to ensure water supply in dry years. We had known previously that other broadly used global models didn't have a proper North American monsoon. This study addresses this need and highlights what we need to do to improve models for the North American monsoon and understanding water in the southwest.”

The new model also suggests that the region’s famous thunderstorms may become less common, as the decreased rain is associated with increased stability in the lower-to-middle troposphere and weakened atmospheric convection.

“The North American monsoon is also related to extreme precipitation events that can cause flash floods and loss of life,” Kapnick said. “Knowing when the monsoon will start and predicting when major events will happen can be used for early warnings and planning to avoid loss of life and property damage. This paper represents the first major step towards building better systems for predicting the monsoon rains.”

The researchers chose to tackle the region in part because previous, coarser-resolution models had shown that this area would be drying out, a prediction that has been borne out in the droughts and wildfires of recent years. But most of those droughts are attributed to the change in winter storms, said Pascale. 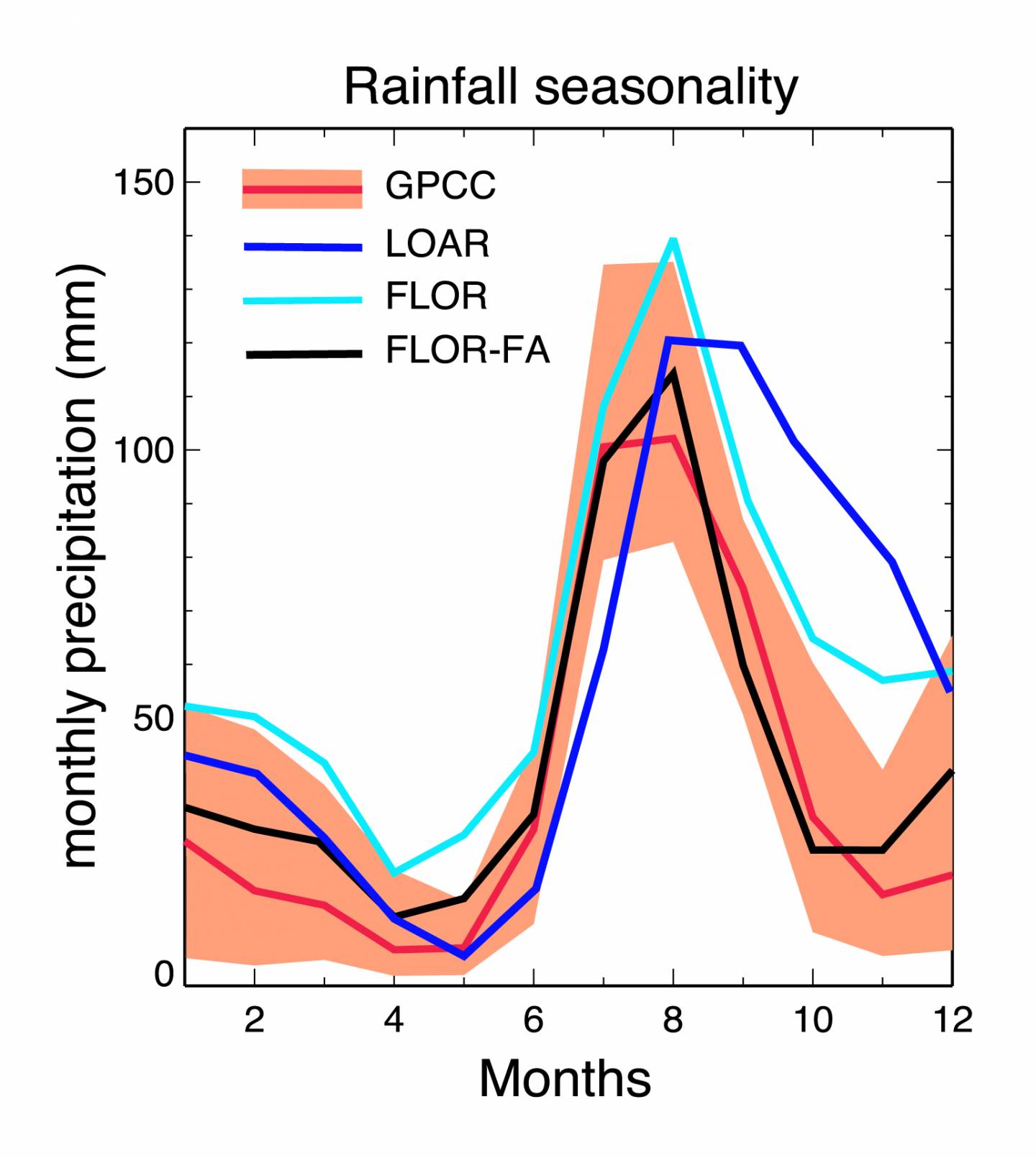 The researchers’ new model, a high-resolution model that corrects for sea-surface temperature biases (FLOR-FA, black line), fits the pattern of observed rainfall (GPCC, the Global Precipitation Climatology Centre dataset based on rain measurements from 1901−2010) better than previous models: LOAR (the Low Ocean Atmosphere Resolution, which is similar to the general consensus model and showed the monsoon being pushed into later months), or FLOR (the Forecast-Oriented Low Ocean Resolution model that does not account for sea-surface bias corrections).

“The storm track is projected to shift northward, so these regions might get less rain in winter, but it was very uncertain what happens to the monsoon, which is the other contributor to the rains of the region. We didn’t know, and it’s crucial to know,” Pascale said.

In their model, the researchers were able to tease out the impacts of one factor at a time, which allowed them to investigate and quantify the monsoon response to the doubling of atmospheric carbon dioxide, increased temperatures and other individual changes.

Pascale stressed the limits of this or any other climate model. “They need to be used with an understanding of their shortcomings and utilized to their expected potential but no further. They can give us quite reliable information about the large-scale atmospheric circulation, but if you want to look at the regional, small-scale effects, you have to be very careful,” he said. “Models are critical but they are not perfect, and small imperfections can lead to big misunderstandings.”

He continued: “We are not saying, ‘We are sure that this is what will be,’ but we wanted to point out some mechanisms which are key, and have to be taken into account in future research on the North American monsoon. This is a difficult region, so future research will point out if we were right, and to what extent.”

The research was made possible by enhancements to NOAA’s research supercomputing capability including access to Gaea and Theia and by the NOAA CICS grant NA14OAR4320106.