Scientists from Princeton University and the National Oceanic and Atmospheric Administration (NOAA) have produced the first global analysis of how climate change may affect the frequency and location of mild-weather days — and it may be soon.

In a report published Jan. 18 in the journal Climatic Change, the researchers define mild weather as temperatures between 64 and 86 degrees Fahrenheit (18 and 30 degrees Celsius); less than 0.04 inches (1 mm) of rain; and a dew point below 68 degrees F (20 degrees Celsius), which indicates low humidity. NOAA funded the work.

Within the next 20 years, the current global average of 74 mild days a year will drop by four days, and fall by another six days by the end of the century, the researchers report. However, people living in the mid-latitudes — including the northern and mountainous United States, the British Isles and Northern Europe, northeastern Asia, and southern South America and Oceana — could experience as many as 10 to 15 more days of mild weather, particularly during the spring, summer and fall.

In summer, some mid-latitude areas — including a sweep of the United States from the Mountain States through the Midwest and into the Northeast — will likely get more very hot and humid days, which translates to a decrease in mild days.

The largest decreases in mild weather will happen in tropical regions where daily occurrences of heat and humidity could rise drastically, the researchers report. The hardest hit areas are expected to be in Africa, Asia and Latin America, where some regions could see 15 to 50 fewer days of mild weather each year by 2100. The loss of mild-weather days could mean less relief from extended heat waves, which could significantly affect public health. 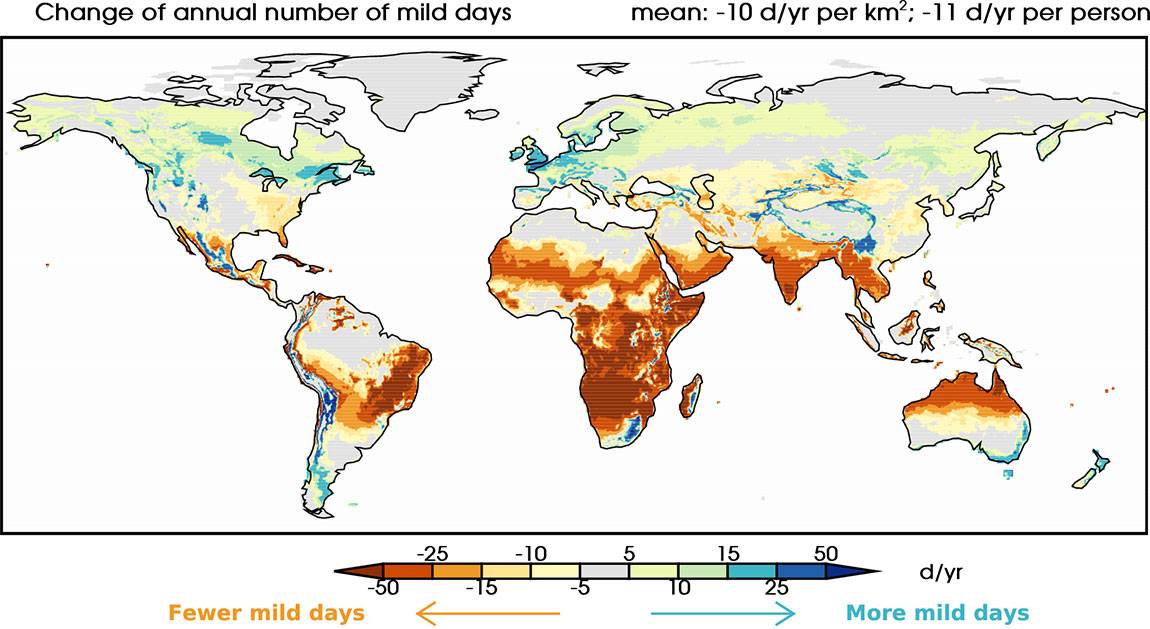 Scientists from Princeton University and the National Oceanic and Atmospheric Administration (NOAA) have produced the first global analysis of how climate change may affect the frequency of mild-weather days, which are defined as having temperatures between 64 and 86 degrees Fahrenheit (18 and 30 degrees Celsius) with low rain and humidity. The current global average of 74 mild days a year will drop by 10 days by 2100. The scale above shows the global change in the annual number of mild days from 2081 to 2100. The yellow-dark blue scale (right) indicates more mild days, while the yellow-red scale (left) indicates a decrease in mild-weather days. Mid-latitude areas of the northern and southern hemispheres could experience 10 to 15 more mild days each year. Daily occurrences of heat and humidity could rise drastically in tropical regions such as Africa, Asia and Latin America, where some regions could see 15 to 50 fewer days of mild weather each year. (Images by Karin van der Wiel, Princeton University and NOAA)

Because mild weather affects more people on a more frequent basis, the study could help better communicate the urgency of climate change to the public, said van der Wiel, who is now a postdoctoral research scientist at the Royal Netherlands Meteorological Institute. The economic health of a number of industries, including tourism, construction, transportation and agriculture, partly hinge on the frequency of weather that the researchers define as mild.

"Extreme weather is difficult to relate to because it may happen only once in your lifetime," she said. "This study can make climate change more tangible to people. It's a way to get people thinking about this issue and show them it really is going to impact their day-to-day lives. It's real, it's now and it's where you live." 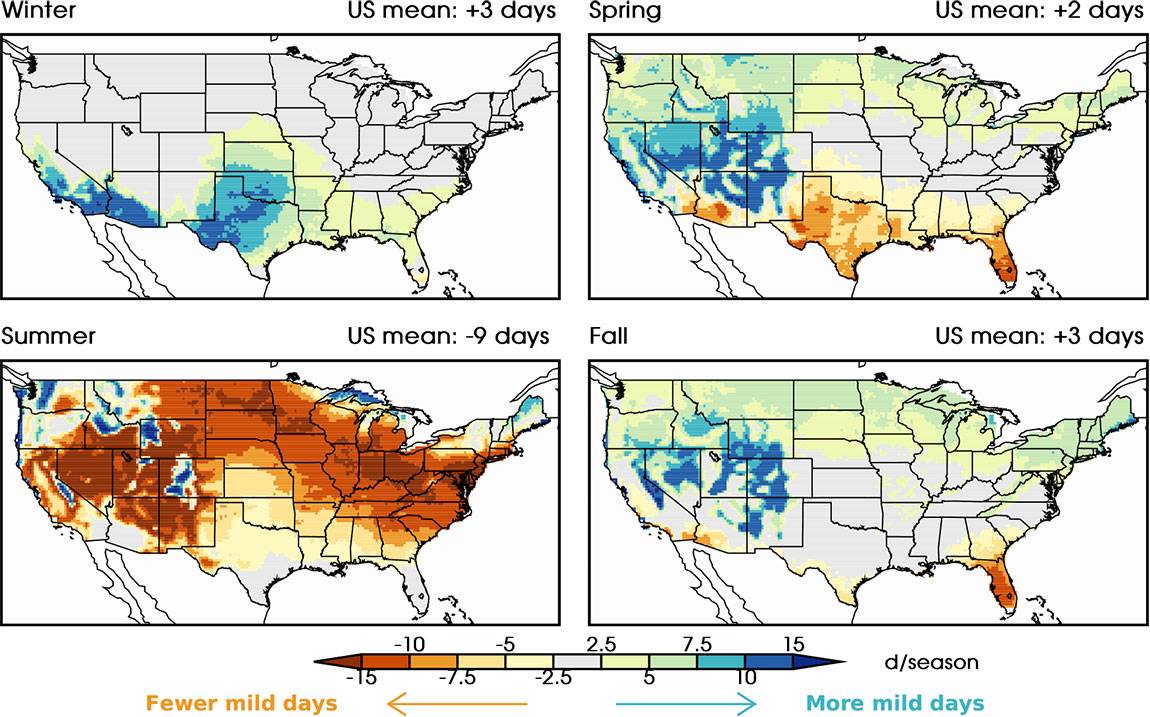 Mid-latitude countries such as the United States will experience more mild days in spring and fall, with fewer mild days (i.e., more hot days) in summer. The scale above shows the seasonal change in the annual number of mild days for the continental United States from 2081 to 2100. The yellow-dark blue scale indicates more mild days, while the yellow-red scale indicates a decrease in mild-weather days. A sweep of the United States from the Mountain States through the Midwest and into the Northeast will see 5 to 10 more mild days in spring (top right) and fall (bottom right), with a corresponding decrease of 7.5 to 10 mild days in the summer. The contiguous United States overall could experience an average nine more hot and humid summer days per year. The Southeast, Plains and Mexican-border states, as well as much of California, will likely get more mild winter days.

On its surface, more mild weather could sound like a good thing. But it results from general temperature increases that could bring droughts, heat waves and other environmental consequences, said co-author Sarah Kapnick of Princeton's Class of 2004, a physical scientist at NOAA's GFDL and a former postdoctoral research associate in Princeton's Program in Atmospheric and Oceanic Sciences.

"We don't want to paint too rosy of a picture with this research," Kapnick said. "Expanding the number of days a year with warm temperatures and no rainfall can have negative impacts on water resources and the cryosphere — snowpack and glaciers — if they come at the cost of rainy and snowy days or cooler temperatures. People in sunny California know this all too well given their drought in the past few years, which was caused by a combination of warm temperatures, low rainfall and low snowpack values."

Van der Wiel and Kapnick worked with co-author Gabriel Vecchi, a Princeton lecturer in geosciences. The researchers used a high-resolution climate model to investigate the changing patterns of mild weather globally by examining the effect on weather over time of increased warming from the buildup of greenhouse gases in the atmosphere. All the projections of the future climate were based on documented changes in the annual occurrence of mild weather days from 1986 to 2005.

The work was made possible by decades of Earth system and model development at GFDL and by improvements made to NOAA's research supercomputing capability, including access to two high-performance supercomputers, Gaea and Theia, named after figures in Greek mythology.

The paper, "Shifting patterns of mild weather in response to projected radiative forcing," was published Jan. 18 by Climatic Change.