Researchers from Princeton University and other institutions may have hit upon an answer to a climate-change puzzle that has eluded scientists for years, and that could help understand the future availability of water for hundreds of millions of people.

In a phenomenon known as the "Karakoram anomaly," glaciers in the Karakoram mountains, a range within the Himalayas, have remained stable and even increased in mass while many glaciers nearby — and worldwide — have receded during the past 150 years, particularly in recent decades. Himalayan glaciers provide freshwater to a densely populated area that includes China, Pakistan and India, and are the source of the Ganges and Indus rivers, two of the world's major waterways. 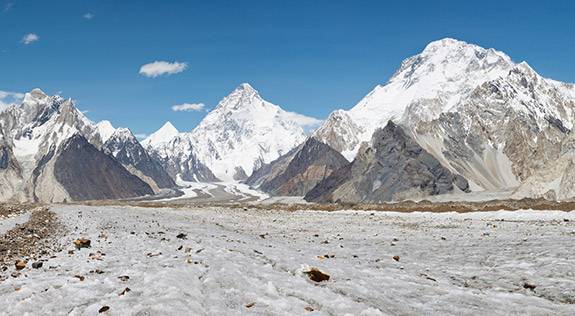 Researchers from Princeton University and other institutions may have hit upon an answer to a climate-change puzzle that has eluded scientists for years, namely why glaciers in the Karakoram range of the Himalayas have remained stable and even increased in mass while glaciers nearby and worldwide have been receding. Understanding the "Karakoram anomaly" could help gauge the future availability of water for hundreds of millions of people. Pictured is the Karakoram peak, K2 (center), the world's second highest mountain, with the Baltoro Glacier in the foreground.

While there have been many attempts to explain the stability of the Karakoram glaciers, the researchers report in the journal Nature Geoscience that the ice is sustained by a unique and localized seasonal pattern that keeps the mountain range relatively cold and dry during the summer. Other Himalayan ranges and the Tibetan Plateau — where glaciers have increasingly receded as Earth's climate has warmed — receive most of their precipitation from heavy summer monsoons out of hot South and Southeast Asian nations such as India. The main precipitation season in the Karakoram, however, occurs during the winter and is influenced by cold winds coming from Central Asian countries such as Afghanistan to the west, while the main Himalayan range blocks the warmer air from the southeast throughout the year.

The researchers determined that snowfall, which is critical to maintaining glacier mass, will remain stable and even increase in magnitude at elevations above 4,500 meters (14,764 feet) in the Karakoram through at least 2100. On the other hand, snowfall over much of the Himalayas and Tibet is projected to decline even as the Indian and Southeast Asian monsoons increase in intensity under climate change.

First author Sarah Kapnick, a postdoctoral research fellow in Princeton's Program in Atmospheric and Oceanic Sciences, said that a shortage of reliable observational data and the use of low-resolution computer models had obscured the subtleties of the Karakoram seasonal cycle and prevented scientists from unraveling the causes of the anomaly.

For models, the complication is that the Karakoram features dramatic shifts in elevation over a small area, Kapnick said. The range boasts four mountains that are more than 8,000 meters (26,246 feet) high — including K2, the world's second highest peak — and numerous summits that exceed 7,000 meters, all of which are packed into a length of about 500 kilometers (300 miles).

Kapnick and her co-authors overcame this obstacle with a high-resolution computer model that broke the Karakoram into 50-kilometer pieces, meaning that those sharp fluctuations in altitude were better represented.

In their study, the researchers compared their model with climate models from the United Nations' Intergovernmental Panel on Climate Change (IPCC), which averages a resolution of 210-kilometer squares, Kapnick said. At that scale, the Karakoram is reduced to an average height that is too low and results in temperatures that are too warm to sustain sufficient levels of snowfall throughout the year, and too sensitive to future temperature increases.

Thus, by the IPCC's models, it would appear that the Karakoram's glaciers are imperiled by climate change due to reduced snowfall, Kapnick said. This region has been a great source of controversy ever since the IPCC's last major report, in 2007, when the panel misreported that Himalayan glaciers would likely succumb to climate change by 2035. More recent papers using current IPCC models have similarly reported snowfall losses in this region because the models do not accurately portray the topography of the Karakoram, Kapnick said.

"The higher resolution allowed us to explore what happens at these higher elevations in a way that hasn't been able to be done," Kapnick said. "Something that climate scientists always have to keep in mind is that models are useful for certain types of questions and not necessarily for other types of questions. While the IPCC models can be particularly useful for other parts of the world, you need a higher resolution for this area."

The researchers found that low-resolution models and a lack of reliable observational data obscured the Karakoram's dramatic shifts in elevation over a small area and heavy winter snowfall. They created a higher-resolution model that showed the elevation and snow water equivalent for (inlaid boxes, from left to right) the Karakoram range and northwest Himalayas, the central Himalayas that include Mount Everest, and the southeast Himalayas and the Tibetan Plateau. For elevation (left), the high-resolution model showed the sharp variations between roughly 2,500 and 5,000 meters above sea level (yellow to brown) for the Karakoram, while other areas of the map have comparatively more consistent elevations. The model also showed that the Karakoram receive much more annual snowfall (right) than other Himalayan ranges (right), an average of 100 centimeters (brown). The researchers found that the main precipitation season in the Karakoram occurs during the winter and is influenced by cold winds coming from Central Asian countries, as opposed to the heavy summer monsoons that provide the majority of precipitation to the other Himalayan ranges. (Image by Sarah Kapnick, Program in Atmospheric and Oceanic Sciences)

Jeff Dozier, a professor of snow hydrology, earth system science and remote sensing at the University of California-Santa Barbara, said that the research addresses existing shortcomings in how mountain climates are modeled and predicted, particularly in especially steep and compact ranges. Dozier, who was not involved in the research, conducts some of his research in the Hindu Kush mountains west of the Karakoram.

Crucial information regarding water availability is often lost in computer models, observational data and other tools that typically do not represent ranges such as Karakoram accurately enough, Dozier said. For instance, a severe 2011 drought in Northern Afghanistan was a surprise partly due to erroneous runoff forecasts based on insufficient models and surface data, he said. The high-resolution model Kapnick and her co-authors developed for Karakoram potentially resolves many of the modeling issues related to mountain ranges with similar terrain, he said.

"The Karakoram Anomaly has been a puzzle, and this paper gives a credible explanation," Dozier said. "Climate in the mountains is obviously affected strongly by the elevation, but most global climate models don't resolve the topography well enough. So, the higher-resolution model is appropriate. About a billion people worldwide get their water resources from melting snow and many of these billion get their water from High Mountain Asia."

The researchers used the high-resolution global-climate model GFDL-CM2.5 at the National Oceanic and Atmospheric Administration's (NOAA) Geophysical Fluid Dynamics Laboratory (GFDL) located on Princeton's Forrestal Campus. The researchers simulated the global climate — with a focus on the Karakoram — based on observational data from 1861 to 2005, and on the IPCC's greenhouse-gas projections for 2006-2100, which will be included in its Fifth Assessment Report scheduled for release in November.

The 50-kilometer resolution revealed conditions in Karakoram on a monthly basis, Kapnick said. It was then that she and her colleagues could observe that the monsoon months in Karakoram are not only not characterized by heavy rainfall, but also include frigid westerly winds that keep conditions in the mountain range cold enough for nearly year-round snowfall.

"There is precipitation during the summer, it just doesn't dominate the seasonal cycle. This region, even at the same elevation as the rest of the Himalayas, is just colder," Kapnick said.

"The high-resolution model shows us that things don't happen perfectly across seasons. You can have statistical variations in one month but not another," she continued. "This allows us to piece out those significant changes from one month to the next."

Kapnick, who received her bachelor's degree in mathematics from Princeton in 2004, worked with Thomas Delworth, a NOAA scientist and Princeton lecturer of geosciences and atmospheric and oceanic sciences; Moestasim Ashfaq, a scientist at the Oak Ridge National Laboratory Climate Change Science Institute; Sergey Malyshev, a climate modeler in Princeton's Department of Ecology and Evolutionary Biology based at GFDL; and P.C.D. "Chris" Milly, a research hydrologist for the U.S. Geological Survey based at GFDL who received his bachelor's degree in civil engineering from Princeton in 1978.

While the researchers show that the Karakoram will receive consistent — and perhaps increased — snowfall through 2100, more modeling work is needed to understand how the existing glaciers may change over time as a result of melt, avalanches and other factors, Kapnick said.

The paper, "Snowfall less sensitive to warming in Karakoram than in Himalayas due to a unique seasonal cycle," was published online in-advance-of-print Oct. 12 by Nature Geoscience.