An enhanced approach to capturing changes on the Earth's surface via satellite could provide a more accurate account of how ice sheets, river basins and other geographic areas are changing as a result of natural and human factors. In a first application, the technique revealed sharper-than-ever details about Greenland's massive ice sheet, including that the rate at which it is melting might be accelerating more slowly than predicted.

Princeton University researchers developed a mathematical framework and a computer code to accurately capture ground-level conditions collected on particular geographic regions by the GRACE satellites (Gravity Recovery And Climate Experiment), according to a report in the Proceedings of the National Academy of Sciences. A joint project of NASA and the German Aerospace Center, GRACE measures gravity to depict how mass such as ice or water is distributed over the Earth's surface. A change in GRACE data can signify a change in mass, such as a receding glacier.

Typically, GRACE data are recorded for the whole globe and processed to remove large regional differences, said lead author Christopher Harig, a postdoctoral research associate in Princeton's Department of Geosciences. The result is a coarse image that can provide a general sense of mass change, but not details such as various mass fluctuations within an area.

Princeton University researchers developed an enhanced approach to capturing changes on the Earth's surface via satellite that could provide a more accurate account of how geographic areas change as a result of natural and human factors. In a first application, the technique brought the complexities of Greenland's massive ice sheet into clearer focus. From 2003 to 2012, the ice sheet experienced patchy fluctuations in ice loss and gain, while the areas of greatest melt gradually migrated from the southeast to the northwest coast.

With their method, Harig and co-author Frederik Simons, an assistant professor of geosciences, can clean up data "noise" — the signal variations and distortions that can obscure satellite readings — and then recover the finer surface details hidden within. From this, they can configure regional information into a high-resolution map that depicts the specific areas where mass change is happening and to what degree.

"We try to do very little processing to the data and stay closer to the real signal," Simons said. "GRACE data contain a lot of signals and a lot of noise. Our technique learns enough about the noise to effectively recover the signal, and at much finer spatial scales than was possible before. We can 'see through' the noise and recover the 'true' geophysical information contained in these data. We can now revisit GRACE data related to areas such as river basins and irrigation and soil moisture, not just ice sheets." 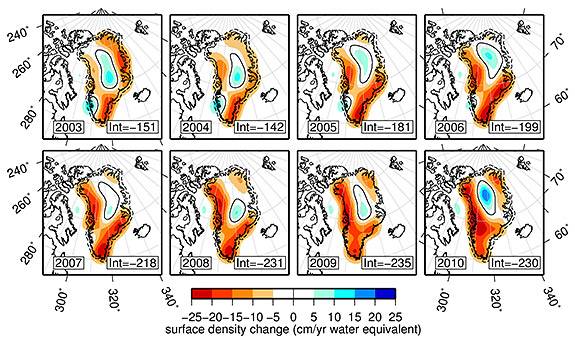 From 2003 to 2010, Greenland overall lost roughly 200 billion tons of ice each year, but glacier activity was regionally inconsistent. Ice loss was concentrated on the southeast and northwest coasts for most of the period, but the area of greatest melt activity began to migrate from the southeast to the northwest coast around 2008. By 2010, the southeast coast displayed only minor ice loss. Meanwhile, the higher and colder interior gained ice mass, as did the southwest coast, slightly, from 2003 to 2006. (Image by Christopher Harig)

The researchers tested their method on GRACE data for Greenland recorded from 2003 to 2010 and brought the complexities of the island's glaciers into clearer focus. While overall ice loss on Greenland consistently increased between 2003 and 2010, Harig and Simons found that it was in fact very patchy from region to region.

In addition, the enhanced detail of where and how much ice melted allowed the researchers to estimate that the annual acceleration in ice loss is much lower than previous research has suggested, roughly increasing by 8 billion tons every year. Previous estimates were as high as 30 billion tons more per year.

Douglas MacAyeal, a geophysical sciences professor at the University of Chicago, said that the research provides a standardized and accurate method for translating GRACE data, particularly for ice sheets. The sprawling, incomplete nature of the satellite's information has spawned a myriad of approaches to interpreting it, some unique to specific scientists, he said.

"GRACE data is notoriously noisy and spatially spread out, and this has resulted in 'ad hoc' methods for processing mass changes of Earth's ice sheets that have wildly different values," said MacAyeal, who is familiar with the Princeton work but had no role in it.

"In other words, each particular investigator ends up getting a different individual number for the net change in mass," he said. "What this research does is figure out a way to be more thoughtful and purposeful about exactly how to deal with GRACE's notorieties. This method would allow researchers to standardize a bit more and also to understand more precisely where they are, and where they are not, able to resolve ice changes." 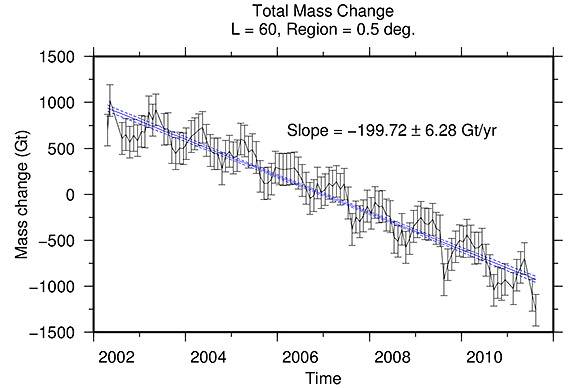 Despite variations in glacier activity, Greenland experienced a steady ice loss of 200 billion tons annually, which could stack up on all of Manhattan to nearly 12,000 feet, or more than eight times taller than the Empire State Building. Nonetheless, the researchers estimated that the annual acceleration in ice loss is much lower than previous research has suggested, roughly increasing by 8 billion tons every year. Previous estimates were as high as 30 billion tons more per year. (Image by Christopher Harig)

Simons compared the noise that previously obscured a precise view of Greenland's glaciers to fog on a window. For a small area such as Greenland, the GRACE signal can be easily overwhelmed by noise, which has numerous causes such as the satellite's orbital position or even the type of mathematics researchers use to interpret data, Simons said.

"Other researchers used less than perfect tools to wipe off the window more or less indiscriminately and quite literally left streaks on the data. They were thus less able to put the continent into the proper focus," he said.

"We effectively modeled then removed noise to get the ice-loss signal out of the data," Simons said. "We then recovered relatively tiny variations in ice mass that to others might have looked like noise, but that to us were shown to be signal."

The Princeton researchers found that Greenland lost roughly 200 billion tons of ice each year during the seven-year period studied, which falls within the range reported by other studies. The amount of ice lost annually could stack up on all of Manhattan to nearly 12,000 feet, or more than eight times taller than the Empire State Building, Harig said.

As expected, ice loss occurred in the lower, warmer coastal areas — as opposed to the higher and colder interior, which gained ice mass — but the melt was concentrated on the southeast and northwest coasts for most of the period studied. Indeed, many coastal areas showed no ice-mass loss, while the ice sheet on the southwest coast actually thickened slightly from 2003 to 2006.

But these trends were more complex when Harig and Simons got into the details. Surprisingly, the location of the greatest melt activity migrated around the island, shifting from the southeast to the northwest coast in just a few years. Ice loss on the southeast coast built up starting in 2003 and hit a highpoint in 2007. In 2008, loss on this coast began to recede and shift toward the northwest coast; by 2010, the southeast coast displayed only minor ice loss, while nearly the entire western coast exhibited the most severe melt. During this transition, melt also receded then picked up again on the northeastern coast with seemingly little overlap with activity elsewhere.

Details such as these can help scientists better understand the interplay between Greenland's glaciers and factors that influence melt such as ocean temperature, daily sunshine and cloud coverage, Harig said. That understanding can in turn help researchers determine how the Greenland ice sheet responds to climate change — and how much more ice loss to expect. At current melt rates, the Greenland ice sheet would take about 13,000 years to melt completely, which would result in a global sea-level rise of more than 21 feet (6.5 meters), Harig said.

"Scientists are not totally sure what the driving force of the melt on Greenland is on short, yearly timescales," Harig said. "There is no certainty about which outside factor is the most important or if all of them contribute. Being able to compare what is happening regionally to field observations from other researchers of what a glacier is doing helps us figure out what is causing all this melt."

Michael Oppenheimer, Princeton's Albert G. Milbank Professor of Geosciences and International Affairs, said that the new level of detail Harig and Simons provide on Greenland's glaciers not only gives insight into what is causing the glaciers to melt, but what could possibly happen if they do.

Unlike water in a bathtub, sea-level rise is not uniform, said Oppenheimer, who is familiar with the research but had no role in it. Higher waters in certain locations may depend on which part of an ice sheet melts, he said. And determining which part of an ice sheet is melting the most requires precise details of ice loss and gain for specific glaciers — details that have largely been unavailable, Oppenheimer said.

"Nobody has really been able to take a look at an individual ice sheet and determine the influence that ice loss from different parts of that ice sheet could have on sea levels," Oppenheimer said.

"The details matter. Being able to pinpoint where and how much ice gain and loss there is tells you something about the driving forces behind it, and therefore how much we can expect in the future," he said. "A synoptic view at a high resolution is what GRACE always promised, and now this research has helped realize that potential. It's time to finally milk the data for as much detail as possible."

Harig is adapting the computer code — which is available online — to study GRACE data on ice loss in Antarctica and water accumulation in the Amazon River basin.

The paper, "Mapping Greenland's mass loss in space and time," was published online Nov. 19 in the Proceedings of the National Academy of Sciences. It was supported by a grant from the National Science Foundation.